‘Thursday 4th May 1989. 4.15 pm’. Penny Batchelor’s debut novel, My Perfect Sister opens with the first of seven flashback vignettes to a date indelibly etched into the memory and psyche of her book’s chief protagonist, Annie Towcester. The ‘dappled afternoon sunlight’ may have warmed her skin, offering five year old Annie its ephemeral comfort, however as the sun set on that otherwise uneventful day, disappearing according to its diurnal nature, so to did Annie’s sixteen year old sister Gemma. The sun would make its return the following morning, Gemma, on the other hand, would never be seen alive again. Batchelor’s first authorial outing is an imaginative and hugely absorbing blending of the mystery and psychological thriller genres, artfully interlaced with gritty Yorkshire humour, emotionally fractured characters and a plot worthy of Agatha Christie. Her book should come with a disclaimer: once opened, this novel will become surgically attached to your hands ! For me, the only thing casting a shadow over its entertaining pages was the certain knowledge that the book would end. It is a cracker!

Reviewing a book such as My Perfect Sister is a frustrating affair. Whilst I want to share with you the dextrous legerdemain of its scintillating plot as it twists with the climatic unpredictability of a British summer, doing so would be a heinous crime on my part. An outline of the plot cannot convey the nuanced, but gloriously knotted skeins constituting its substance, nor does it allow me to evince Batchelor’s skill as a devious plot weaver. In short, the novel is the story of the child we meet on page one, now a thirty year old underachiever, emotionally and psychologically unmoored, estranged from her parents, but forced to return to her family home in order to care for her ailing, but despised mother and put a roof over her maladjusted head.

Penniless, jobless and newly single, Annie takes residence in her old bedroom across the corridor from her long since vanished sister’s bedroom. The family home is both unremarkable and sterile, barely repressed grief oozing from its outdated décor like the sour aroma of discarded vegetable peelings. Gemma’s room has become a meticulously maintained shrine to Annie’s ‘perfect sister’. Annie’s frail mother, indulging her own monomania, preserves Gemma’s memory in the formaldehyde of her belongings.

Encouraged by her charismatic, extrovert best friend, Pritti, Annie embarks upon a cathartic quest for truth: was her big sister murdered on that fateful day in 1989, or was her disappearance a volitional act, with the corollary that she may still be alive, though dead to her family ? Ostensibly a whodunnit, Annie’s decision to solve the mystery of her sister’s disappearance is the catalyst for the discovery of painful personal truths. Understandings as occluded by repressive trauma and sophomoric assumption as they are consciously concealed, buried under an almost impenetrable layer of misinterpretation, subjective bias and perfidious betrayal. Batchelor unfolds her protagonists quest to form the novel’s enigmatic plot and in so doing animates her story with suspense, tension, malignant malfeasance and the ever-present sense of dark truths lurking beneath the banality of the domestic veneer, as fragile as it is deceptive.

The modern thriller is of course the child of ancient poems such as the Epic of Gilgamesh, Homer’s Odyssey and The Three Apples, a tale from One Thousand and One Nights ( Arabian Nights ). Erskine Childers’s The Riddle of the Sands (1903) is perhaps the first recognisably modern thriller. The psychological thriller combines the tropes of the classic thriller genre with a ‘a dissolving sense of reality’ and is often told from the viewpoint of a psychologically distressed character, advertising their mental discord and troubled cognitive bias, whilst also exploring the ramifications of a tortured mind in the form of impaired emotional intelligence and unrecognised trauma. Batchelor draws upon the seminal ingredients of both genres to give us her story, and cleverly splices into her precisely engineered plot, elements commonly seen in the works of Agatha Christie, including red herrings, unreliable witnesses and self-deception.

In addition to creating a story as compelling as it by turns, entertaining, shocking, bleak and comical, Batchelor manipulates her reader with the cunning of a duplicitous Victorian magician. Our author knows that we see others through the lens our own distorted subjective prism. Reality is a contrivance of assumptions, unconscious and conscious bias, emotionally skewed interpretations and memories suffused not with fact, but psychologically unsound causations. 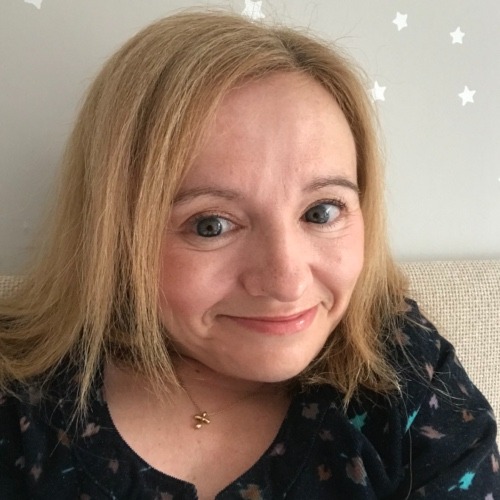 Penny Batchelor
A child’s mind is hypersensitive to contextual interpretation and its nascent cognitive processes easily blown off course by the winds of falsehood and naivety. Batchelor cleverly exploits these truths to help us understand Annie and those around her. For me, her real triumph is to twin Annie’s journey to enlightenment via the shadowlands of repressed or unknown truths with our own journey through the book. Even the most perspicacious reader will fall victim to their inveterate prejudices and predilection for obvious answers. Bachelor mischievously dangles the carrot of truth in her reader’s eyeline, but keeps it just out of grasp. This urge to solve the puzzle lends the book its magnetic force, turning the page becomes a necessity as we strive to find the novel’s truths.

Beyond the thematic mystery-thriller heart of the novel, Batchelor explores not just the search for Gemma’s fate, but the psychological disruption to wellbeing invidiously decanted by prenatal and antenatal depression. Psychological trauma or ‘An inescapable stressful event that overwhelms people’s existing coping mechanisms’ as defined by Van Der Kolk and Fisher in 1995, is also examined. Annie’s relationship with her mother and her own past is adroitly used as the vehicle by which Batchelor both articulates her story and embeds its structure with her thematic objectives. This intelligently deployed technique lends her book something more than a riveting whodunnit with diverting complexities. It gives the novel a depth sitting beneath its gritty, entertaining surface.

Batchelor utilises a wide range of literary devices to capture her reader’s attention from the first page to the last. The story is mainly told in the first person, present tense voice of her direct, unsentimental protagonist. We soon acknowledge Annie as a Yorkshire lass but one who is both an unreliable narrator and woman scared by her past. Flashbacks to the day Gemma disappeared are presented as third person omniscient accounts of events recounted not in chronological sequence, but in fragmented snippets, each told from the vantage point of a key character’s actions. In doing so, Batchelor gives us information as bait for her trap. We, the readers piece together what we know and manufacture meaning according to lies masquerading as facts.


Also by Paul Spalding-Mulcock...
Review: A River Called Time By Courttia NewlandAn Interview with Alice Ash - Author of Paradise Block‘ …Really Real Poor People, Surviving Alone Together’: Paradise Block By Alice AshForgotten History, Contemporary Truths:The Tainted By Cauvery MadhavanInterview With Catherine Menon - Author Of Fragile Monsters
Characterisation is sharp, frugally underpinned by restrained prose and carefully conceived psychological observation. Annie is a marvellously flawed human being, given life by an author who reveals personality not by description, but by action, habit and emotional response. Annie’s mother is an equally impressive creation: a woman devoured by malevolent biological forces serving as a metaphor for the affects of her own repressed demons, anxieties and love actuated convictions. Support characters are drawn with astute authorial aplomb and Annie’s best friend Pritti is a ray of much needed light in an otherwise dark tale.

Chief amongst Batchelor’s abilities is the use of vernacular infused, sensitively modulated prose to lend verisimilitude to her witty and often caustic dialogue. The spirit of Yorkshire permeates the characters like the rain falling almost continually upon our blessed county. We recognise people who populate our own realities and this grounds the story in the inescapable seasoning of vicarious credibility. The story might be a tour de force of first-class plotting, however the characters animating it are the novel’s lifeblood.

So, having raved about what is for me a brilliant example of a cleverly executed mystery thriller, where does it fall down ? It does not. By comparison with Gillian Flynns’s Gone Girl, we are constantly off balance and unsure of truths refracted off cracked mirrors, however Batchelor does not quite pull off that book’s brilliance. Neither does she explore mental health quite as sublimely as Ken Kesey in One Flew Over The Cuckoo’s Nest. The Girl On The Train, by Paula Hawkins explores a woman’s inability to cope with her past with more depth than Batchelor conjures. However, merely referencing these works goes some way towards evincing my regard for Batchelor’s achievements. Regardless of comparison, My Perfect Sister is a novel standing on its own two feet and one deserving of a reader’s time. Batchelor may not have authored a modern classic, but she has produced a fine book of deceptive potency.

So, yet another debut novel I’m delighted to have read. A book which kept me absorbed, entertained and guessing until its final disturbing denouement. I had followed the right cup, but Bachelor hid the ball from my eyes. Whilst I identified the culprit, I completely failed to understand the crime or its true meaning. For that, I take my sleuthing hat off to an author I confidently expect to captivate many readers, and keep even the most perceptive of us in the dark until her last page !


My Perfect Sister is published by Red Door Press.
More in this series...
Review: Lightseekers By Femi KayodeAn Interview with Alice Ash - Author of Paradise Block‘ …Really Real Poor People, Surviving Alone Together’: Paradise Block By Alice AshInterview: Neema ShahKololo Hill By Neema Shah: A ReviewInterview With Catherine Menon - Author Of Fragile Monsters‘Ghosts Everywhere I Look. Ghosts Everywhere I Don’t’: Fragile Monsters By Catherine MenonInterview: Bethany CliftLast One At The Party By Bethany Clift: A Review'There Is No Such Thing As Fate, Because There Is Nobody In Control': My Name Is Monster By Katie HaleInterview With Frances Quinn - Author Of The Smallest Man'A Hero Of Our Time!': The Smallest Man By Frances QuinnInterview: Thomas McMullan, Author Of The Last Good ManReview: The Last Good Man By Thomas McMullanInterview With Nikki Smith - Author Of All In Her Head'I Don't Know Who I Am Anymore': All In Her Head By Nikki SmithHannah Tovey: An InterviewInterview With Cat Walker - Author Of The ScoopThe Education Of Ivy Edwards By Hannah Tovey: A Review99 Not 42!: The Scoop By Cat Walker