Thomas McMullan
Thomas McMullan is a writer, critic and journalist, based in London, whose debut novel, The Last Good Man, was published in November by Bloomsbury. The book is a disquieting and sinister story and a unique take on the modern zeitgeist; I was keen to find out more about the author, what inspired the novel and what his literary next steps might be.

Thomas has had articles published in the Guardian, on BBC News and in the New Statesman amongst others, covering a wide range of subject matter, from climate change to cryptocurrency, and the influence of video games on the development of immersive theatre – he has even written for the theatre himself. Born in Glasgow, he has a love of the Netherlands taken from his mother’s Dutch heritage and he feels lucky that his father’s family gives him a strong connection to Ireland.


Also by Caroline Spalding...
Review: Cold Enough For Snow By Jessica AuReview: Good Intentions By Kasim AliReview: Strangers I Know By Claudia Durastanti, Translated By Elizabeth HarrisWalking For Wellbeing – It Really Does WorkReview: The Love Songs Of W.E.B. Du Bois By Honorée Fanonne Jeffers
Ten years ago, Thomas lived in Tianjin, China, where he first encountered the da zi bao, or “big character posters” that were an initial inspiration for The Last Good Man. He was working in the English Language and Translation department at Nankai University and it was explained that these inflammatory posters, often citing misdemeanours or denouncing individuals for a myriad of reasons, originated in China’s imperial period. They came to prominence during the Cultural Revolution, when individuals named in accusatory posters were frequently hounded and beaten by gangs. Later, when Thomas was writing The Last Good Man, he told me that there were many discussions of “truth, interpretation and misinformation” which contributed to the development of the novel, and elsewhere he has said that “The idea of words on walls leading to violent acts feels very real”.

I compared the use of the wall in The Last Good Man for the making of anonymous accusations with the potential for online personas to voice hateful speech and criticism on social media, but reflected that a direct analogy would be too simplistic. Thomas expanded upon this point, noting that “the wall in my novel is not intended as a straightforward metaphor for social media or the internet. It is its own thing”. And certainly the world Thomas has created in the book feels very real. There are elements that are recognisable to our own reality, but there is enough that is profoundly unusual to reinforce our sense of uncertainty as we explore the narrative.

I asked him for his view on digital technology – he has written extensively on the subject. It struck me that whilst technology was distinctly absent from The Last Good Man, I wondered whether his point was that technology may influence, but not alter, fundamental human instincts, so its absence would not change our behaviour. He told me, “there aren’t computers or phones in the book but there are paintbrushes and hammers, and all those things – as with digital technology – expand our reach, give us routes to expression. The tools may change but the impulses are ancient”. He added that he wasn’t necessarily averse to tech, but appreciates it could be argued that some digital platforms can push people towards conflict. However, the role of technology in our modern society comprises many complex arguments and ideas and, he reminds us, “it’s never as simple as that”.

The setting of The Last Good Man remains unexplained and I questioned whether this was a conscious decision. He said that he wanted the focus of the book to be firmly on the village in its present state, and therefore it was his decision not “to explain the wider world”. His personal view of the book is that it is “less a post-apocalyptic dystopia and more a manifestation of some mass psychological crisis, a bad dream”. I assumed the setting to be exactly what Thomas says it is not, i.e. a post-apocalyptic dystopia, so was reassured to hear him add “I like leaving gaps for readers to pour in their own meanings”. 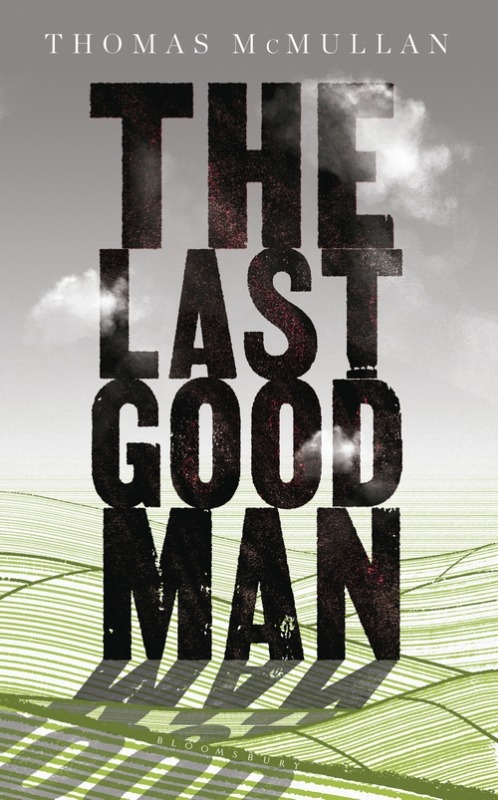 I asked what themes Thomas had wanted to explore in The Last Good Man - when so much is left to the reader’s own interpretation, it is interesting to get the writer’s perspective. He said he wanted to look at “the power of words to anchor us. How do names bind us to our deeds? How do they put us in ourselves?”. He cites Cormac McCarthy’s The Road, from which a well-known quote emerges - “The world shrinking down about a raw core of parsible entities. The names of things slowly following those things into oblivion… The sacred idiom shorn of its referents and so of its reality”. I, personally, find it interesting how we use words to define ourselves and our actions, how we assign nuanced meaning to specific words and the consequence we sometimes face through use of language. In the novel, I saw the wall as a symbolic judge, jury and executioner, the appearance of posters displaying words that would, in most cases, literally anchor the accused in the village stocks, others committed to a more severe fate. Another example is the character of Charlotte, who muses on her own personal tragedy, choosing to call it “The Tragedy. Capital T” as if the addition of the capital letter adds emphasis to its horror.

The book began as a short story, morphed into a screenplay and then eventually became a novel. He describes it as a “circuitous route” and that he probably would not repeat the process in future. Instead, he prefers to begin with an image, “If the image is still interesting after a few months, that’s a good sign”. The Last Good Man was the second novel he pitched to agents, the first went nowhere which was, as expected, “gutting to spend all that time and energy for a project to peter out”. The biggest challenge he has faced the second time round has been exercising patience, when the publishing sector often works “at a glacial place (causing) a lot of agonised waiting”, and of course, the endless back-and-forths.

When asked whether he had a distinct authorial voice or style when writing, he told me I’d have to ask him after his second novel is published. Fans of his first will be pleased to hear a second book is underway, but it is still early days.

Thomas has long been an admirer of Samuel Beckett, but more recently he has “got a lot from reading Samanta Schweblin, László Krasznahorkai, Thomas Mann, Anne Serre, Dino Buzzati, Fernanda Melchor (and) Yan Lianke”. He also mentioned Kenzaburo Oe; he enjoys the way Oe describes people’s faces. This name, previously unknown to me, sent me online to learn more, and I found a curious parallel between the two writers. Good old Wikipedia informed me that Ōe was awarded the Nobel Prize in Literature in 1994 for creating “an imagined world where life and myth condense to form a disconcerting picture of the human predicament today". The Last Good Man could be interpreted in a similar fashion. Thomas has also recently re-read Virginia Woolf’s To The Lighthouse which he described as “revelatory”, returning to it after a 15 year hiatus.

Thomas’s reaction to my final question illustrates exactly why I, and perhaps others, have come to see him as somehow enigmatic. Like his novel, his answer is certainly open to interpretation, but showcases how he can so skilfully say so much, with so few words. When asked what he considered the role of an author to be in today’s society, his succinct response was “look around you. Put your hands in your pocket. Exhale”.

The Last Good Man is published by Bloomsbury
More in this series...
Review: The Stranding By Kate SawyerReview: You Let Me In by Camilla BruceInterview With Victoria PrincewillThe Traumatic Legacy of Denial: The Sanatorium By Sarah PearseThe Imposter by Anna Wharton: A ReviewGirl In The Walls By A.J. Gnuse - A ReviewReview: Lightseekers By Femi KayodeAn Interview with Alice Ash - Author of Paradise Block‘ …Really Real Poor People, Surviving Alone Together’: Paradise Block By Alice AshInterview: Neema ShahKololo Hill By Neema Shah: A ReviewInterview With Catherine Menon - Author Of Fragile Monsters‘Ghosts Everywhere I Look. Ghosts Everywhere I Don’t’: Fragile Monsters By Catherine MenonInterview: Bethany CliftLast One At The Party By Bethany Clift: A Review'There Is No Such Thing As Fate, Because There Is Nobody In Control': My Name Is Monster By Katie HaleInterview With Frances Quinn - Author Of The Smallest Man'A Hero Of Our Time!': The Smallest Man By Frances QuinnReview: The Last Good Man By Thomas McMullanInterview With Nikki Smith - Author Of All In Her Head