What Did You Do In Lockdown: How To Write An ebook

In years to come I am sure that we will all have our own unique ‘lockdown stories’ about how we managed to spend the days. Suddenly unemployed and with a vast sea of time ahead of me, I decided to finally get to the bottom of a question that had been nagging at the back of my mind for years: what was it like to actually be alive in York during Roman times?

Since moving to York in 2009 I had gradually become ever more curious and interested in the layers of the long and varied history that I glimpsed in the eclectic architecture of the city, as I ventured along its myriad streets. At one point I considered becoming a tour guide of the ancient capital of the north and began energetic internet research on the various epochs of York’s life. I discovered that there seemed to be some misconceptions about the city walls. Some bloggers wrote of Roman walls and others of medieval walls. I was confused. Even an article about York in the Guardian as recent as 2nd August 2020 entitled ‘No One Expected This’ describes banning cars inside ‘York’s Roman Walls’.

The truth is that there is practically only one section of Roman wall left in the city and that is the stretch that ends in the Multangular Tower in the Yorkshire Museum gardens. I used to explore the tower and marvel at the fact that the lower half would have been built by the Ninth Legion Hispana almost two millennia ago. This led me to wonder about the route that the actual walls of the Roman fortress had followed. If Bootham bar lay on the site of the main gate to the right of the fortress (Porta Principalis Dextra), where had the three other gates given on to?

Then more questions began to flow thick and fast. Where had the Ninth Legion Hispana come from? Their name hinted at Roman Spain. Locals seemed to be proud that Roman York (Eboracum) had been granted the status of a colonia. What did this mean? A stone plaque on the corner of Nessgate and High Ousegate states that there was once a Temple of Hercules in this area. I began to visualise colonnaded buildings in front of the River Ouse. Why were local historians so proud that Constantine the Great was proclaimed Emperor in Eboracum and where had that huge column in Minster Yard next to Constantine’s reclining statue come from?

As I found some answers, still more questions arose in my mind. Who were the people who populated the fortress and the civilian city? Clearly, the military encampment was a man’s world, but were there women here? Were there female camp followers? There were camp followers at Hadrian’s Wall, so there must have been women here. What was life like for a woman living in Eboracum? Were women even allowed in the fortress?

As my research progressed, I discovered that there would have been female inhabitants of all social classes and there was one particularly special one who was recently discovered to have been of African origin. She has been since dubbed ‘the Ivory Bangle Lady’ due to her rich grave goods. If there were approximately 200 million slaves during the course of the Roman Empire, were there slaves in Eboracum too? There must have been. And what about gladiators? The answer to that question was affirmative also. 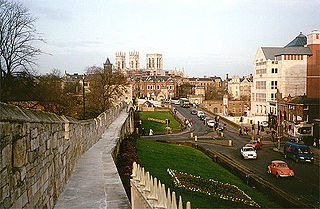 York City Wall
By the time lockdown arrived there were still so many questions revolving in my mind like spinning plates that I decided that I was going to write a book that would help me to answer my own queries and put a stop to my own incessant questioning. If nothing else, I would finally be able to visualise Eboracum.

I began by mapping out the chapters and decided on a rough chronological order. Chapter One would answer the question of why the Ninth Legion marched to ‘the place of the Yew trees’ from Lincoln and founded the fortress between the River Foss and the River Ouse. Researching the rebellious Brigantes tribe, I discovered the fascinating story of Cartimandua, the Celtic Queen who was an ally of the Romans.

To understand how the fortress was built I turned to Patrick Ottaway’s book ‘Roman York’, which gives incredible details about measurements of walls and depths of ditches. To find out about the kind of houses the people of the colonia lived in, I went to British History Online Inventory Volumes (www.british-history.ac.uk/rchme/york) and pored over the archaeological evidence that had been discovered from the seventeenth century to the present day.

By Chapter Five I arrived at the really interesting section – who were the men, women and children who had lived and died here? To answer this query I studied the tombstones that our ancestors have left behind, which have all been photographed and catalogued on www.romaninscriptionsofbritain.org. From the Latin inscriptions translated into English, it is amazing what can be gleaned about the lives of the inhabitants of Eboracum. For example, many of the women’s names showed that they were of Celtic origin and so must have married the invaders and become Romanised. It was the equivalent of the Yanks landing during World War Two when many romances blossomed between local women and the exotic foreigners.

I also read a book on Roman women and on Rome in general that I found on the Internet Archive, a free online library of digitised books that you can access merely by creating an account. Thousands of out of print and out of copyright books are available to you at the click of a button. This was an absolute lifesaver when York Explore library was closed due to lockdown. With the help of this online research tool, I was able to tell the stories of the religious worship in the city, the arts and crafts employed, as well as Eboracum’s relations with other Roman outposts. Finally, the natural end of the book was the decline and abandonment of the city.


Multangular Tower
At last after weeks of research and note-making, I was ready to begin writing. Initially, I wrote and re-read every sentence, unsure whether it made sense. I became frustrated with my staccato writing, but after some practice it began to flow more naturally. However, there was a lot of cross-referencing and fact-checking that was quite monotonous. Finally, I decided not to get too hung up on errors and just to write it and then check it at the end.

My daily writing routine consisted of waking up in the morning, firing up the laptop, re-reading the previous day’s work and then beginning writing again. (I must confess that I did sometimes sit at my dining room table in my dressing gown, too absorbed to break off and get dressed). At lunchtime I stopped for a quick sandwich, drank copious amounts of tea and coffee and finished at 5pm. Some days I would be shocked when I looked at my watch to find that hours had gone by, not mere minutes. At times I felt like I was in a surreal, dreamlike world, a mixture of imagination and reality. Then after two weeks, it was finished. It was like I had given birth. The only question was what to do with my new baby, which I had decided to call Eboracum: The Story of Roman York.

Kindly my husband acquiesced to my request to proofread the book and spent another week checking it, in between his own chores, while I kept nagging him to read a chapter a day. In the meantime, I bought a self-help book by an author who claimed that she made a ‘multi-six figure salary from self-publishing ebooks’, in which she put the case for self-publishing very strongly.


Also by Claire Shaw...
What Did You Do In Lockdown 3: How To Market An ebookWhat Did You Do In Lockdown 2: How To Publish An ebookReview: The Miseducation Of Evie Epworth By Matson TaylorThe Great Face Mask DebateDoes It Feel Strange Being 'On Furlough'?
In 2016, forty five percent of all books purchased in the US were digital. You gain higher royalties from ebook publishing – up to 70 percent on some platforms, in comparison to the usual 10 and 15 percent with a traditional publisher. You can sell in the global marketplace and still retain the rights to your book. Plus there is a faster time to market. Once submitted to the e-publishing platform, your book is usually for sale within 8 – 72 hours and so you can start earning faster. With a traditional publisher you can wait months, and even years, to see your book in print.

Persuaded, I decided that I was going to venture into the world of ebook publishing and plumped for the biggest and most famous platform – Amazon Kindle - even though there are many more emerging ebook marketplaces such as iBooks, Kobo, Book, Smashwords, Scribd and Tolino. The next step was to learn to navigate the tools of Amazon’s Kindle Direct Publishing.

Next week I will share with you how I designed the front cover, formatted the book and got it on the Amazon Kindle website, so that you too can write the book that they say is inside everyone.