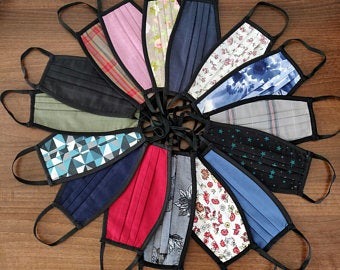 Reusable Face Masks
On Monday 13th July 2020 Boris Johnson announced that people would need to wear face masks in shops from Friday 24th July and thus began what I have come to term as ‘The Great Face Mask Debate’. It was with some bewilderment that I followed the discussion in the media. Some argued that by being compelled to wear face masks in shops our civil liberties were at stake, indignant that they would no longer hold sovereignty over their own faces. Others argued that it was pointless anyway as there was little evidence to show that face masks stopped the spread of the Covid 19 virus. The government gave us a full two weeks to purchase our face masks and psychologically prepare ourselves for entering shops looking like Zorro. Meanwhile the media used this time to present the cases of face mask conspiracy theorists and face mask deniers, much to my frustration.

Quite honestly, I cannot understand what all the fuss is about. Months ago European countries like Spain proclaimed that face masks must be worn in public or citizens would face fines of 100 Euros. Throughout this pandemic, I have been impressed by Spain’s no-nonsense and practical approach to the crisis.

Meanwhile even before people were compelled to wear face masks in Asian countries, many did so out of politeness and consideration for their fellow citizens. They argued that although there might not be any hard scientific evidence that they prevented transmission, wearing a mask makes your neighbours feel more at ease and reassured. The simple issue of courtesy to your fellow human beings is enough to convince me of the argument for face masks.

Nevertheless, it was with huge dismay that I read that a bus driver in France was attacked by three individuals after he had asked them to wear face masks and they refused. Unfortunately, Phillippe Monguillot died after his family courageously took the decision to turn off his life support machine on 7th July 2020. Clearly, some people have completely lost the plot when it comes to the issue of face masks.


Discarded Face Mask
Even though the debate of whether or not we should wear them was largely put to bed on Friday 24th July, there continue to be contentious issues arising out of the wearing of face masks. The most pressing and concerning for me is the use of single-use face masks. Often blue on the exterior and with a tissue-like texture, this form of personal protection equipment has erroneously been called ‘disposable’. This label is extremely unhelpful, when in fact, they are not disposable at all, but are made from a type of plastic that takes hundreds of years to biodegrade. It was with dismay that I walked past the bus stop near my house a few days ago and saw one ripped into four pieces and discarded on the pavement. Should the rain wash and the wind blow this into a nearby river, it could end up in the sea, along with the other eleven million tonnes of plastic waste that is on course for our oceans this year.

A recent report summarised in The Guardian newspaper two weeks ago contained the shocking headline, ‘Plastic Waste Entering Oceans Set to Triple in Next 20 Years’. I couldn’t quite believe my eyes on reading this. After all of the recent television programmes, such as Hugh Fearnley Whittingstall and Anita Rani’s eye-opening ‘War on Plastic’, plastic waste is not set to decline, but to increase. I was left incredulous.

The report published in the journal Science states that plastic waste in the sea is predicted to increase to 29 million tonnes by 2040. There will be 50kg of plastic waste for every metre of coastline in the world. Once in the sea, the vast majority stays there forever, breaking down to form micro-plastics that can get into the human food chain through the fish we eat and the salt we mine.

During our three month lockdown, many people on social media posted that they were experiencing a time of almost spiritual connection with nature. They felt that they could hear the birds sing more clearly due to the reduction in traffic noise. As the beginning of lockdown coincided with the onset of spring, they reported that they had the time to notice the blossoming of plants and the magnificence of trees. One article even explained how the Japanese have long gone in for the practice of ‘shinrin-yoku’, or forest bathing, and how this can boost wellbeing.

People talked of lockdown as a time to try to make a positive change for the future regarding our environmental impact. With the easing of lockdown and the return to the ‘new normal’, we must not lose sight of this vital goal, which is necessary for our collective survival on our beautiful and generous planet.

Some steps that we can take to reduce the negative impact of single-use plastic face masks are firstly, to wear the face mask repeatedly until it starts to fall apart. Then we can dispose of it by shredding it so that it will not take as long to biodegrade. I am sure it goes without saying that it then needs to go into a bin. Once we have disposed responsibly of this type of face mask, we should consider obtaining reusable face masks. Several companies which produce single-use PPE are profiteering from the current global pandemic. Dentists have reported that the PPE that they need to buy since the lockdown began to ease has increased in price by thirty percent. We need to think carefully about who we give our hard-earned cash to.

You may be lucky to be able to make your own face masks or know someone who can. A friend of mine downloaded a template from the internet and has made sixty for her friends and family. She estimates that after buying the material, each mask has cost her a mere £1. If like me, you are unskilled with a needle or sewing machine, you can buy a home-made mask from the website https://www.etsy.com/uk/, which is a platform that allows individuals to sell things that are homemade. My husband was surprisingly creative when he discovered the website https://www.contrado.co.uk/ where you can design your own bespoke face mask. He went mad and purchased four each bearing one of his own photographs. He is an avid music lover, so I can’t wait to see the one with the trumpet horn blaring out of the mouthpiece.

There are plenty of ways for you to express your creativity and individuality when wearing a face mask, and help to conserve our fragile ecosystem. There have been several heartrending and heroic stories that have emerged from our time in lockdown, such as the centenarian Captain Tom Moore who raised millions for charity by walking the length of his garden each day and who was knighted for his endeavours. I was extremely humbled when I learned about Tony Hudgell, the five year-old-child with two prosthetic legs, who, inspired by Captain Tom, walked ten kilometres and raised one million pounds.