Weekend Interview: Putting A Smile On The Face Of The Nation

Dr Hussein and Dr Hassan Dalghous are 26 year old twins building a dentistry empire to improve the nation’s oral health. Group Editor Andrew Palmer caught up with them to hear their story.


Hassan and Hussein
The first thing to note about the Dalghous twins are their bodies!

And that’s before they have even smiled to show their immaculate teeth.

The 26-year-old entrepreneurs I soon get to learn, are not only known for their 'Twin Workout' YouTube channel but as pioneering dentists specialising in the fast-growing area of restorative and cosmetic dentistry at a time when cosmetic and advanced reconstructive dental treatments have never been so popular. According to current statistics, the global market for cosmetic dentistry alone is predicted to grow at an annual rate of 5%, increasing its value to an estimated £21bn by 2026.

The current rise in demand in part stems from increased take-up amongst the younger, 'Selfie' generation seeking straight teeth and a perfect smile as well as a soaring number of older people opting for new reconstructive dental procedures.

Their drive and commitment is impressive and nothing, it seems, will stop them from reaching their ambitious goals. Even the constant half glass empty refrain: ‘it will never work or be a success in the Roundhay area of Leeds,’ they heard as they set out on their journey to make our routine visits to the dentist more of a positive and transformative experience, didn’t diminish their determination.

That for some of us, that would have been enough to set us off course, but those who have met these brothers and heard their story recognise their levels of energy and fortitude would cancel out the interference. So much so, they proved the naysayers wrong as their patients visit their clinic from all over the UK Including premier league footballers.

To get under the skin of these two motivated businessmen one must travel back to 1956 when their parents left Libya heading to the UK on student scholarships.

“Our mum came over to read for a master’s degree and dad a PhD. As students they were living on a budget lifestyle, which back in the 1950s on a scholarship with a minimum amount of money, life was not exactly easy.”

“Our parents settled in Leeds and taught us to always strive to be the best at what we do.

“Dad is still an oral surgeon and when we were growing up, we enjoyed going to the surgery with him and hearing about his treatments at the clinic and that spurred us on to follow in his footsteps.”

It’s clear to see their determination is an inherited characteristic.

However, I need to clear up the bodybuilding part of their lives before I move on to the focus of the interview.

Their father was a frequent visitor to the gym and the pair decided to follow suit when they were 15 years old, really enjoying being able to improve their physique and how it translated into helping them develop a strong mental outlook.

“We had a basketball coach who was really keen on fitness, and we would go to the gym at lunch times to do pull-ups and other exercise and keep fit and it has continued throughout our life.

“My twin brother did a bodybuilding competition in Spain about 8 years ago and he achieved a gold medal.

“For us it’s even more important as it gives us that disconnect between work and the stresses of life and it is the training hard aspect, the social element of meeting people and members and the chit chat is enjoyable.

If that wasn’t enough, the duo has yet another string to their bow, they speak fluent Spanish as “our parents understood the benefits of learning an extra language.”

Being proficient in Spanish meant that Hassan and Hussein could follow in their parent’s footsteps and move to a different country to study. They opted for a five year dentistry course in Valencia, Spain which they thoroughly enjoyed graduating two years ago. “It was by all intensive purposes a lovely experience.”

It was after graduation that the duo started thinking about the ways they could improve dentist visits for patients.

A look at the Yorkshire Dental Suite founded by the twins' father Dr Abdul Dalghous, helped frame some of the ideas that the dynamic twins wanted to explore to change the dental experience.

“Traditionally you go to the dentist and it’s a bit of a naff experience, from the moment you walk in there is often a smell and everyone’s straight to the point and brash. I’m sure you have experienced it, Andrew.”

Learning from a few of their favourite hotels the twins set out to create an environment where patients could come in, immediately feel at ease, relaxed, and chilled out, and then look forward to returning for their check-ups.

Hassan and Hussein explain it was an entrepreneurial thing to do. Their family values had taught them about putting something back into society and making people feel good and that was their starting point.

Having a vision is fine but where to start? For the brothers it wasn’t too difficult as an opportunity soon presented itself courtesy of one of their mother’s friends and fellow partner in the surgery, Dr Anderson, who had the Chapel Oak Surgery, which had moved across the road to a new purpose built building.

“Dr Anderson told mum the old site was soon up for sale. That was great news because mum was able to say that we wanted to start a private practice and would be interested in the building.

“We presented our vision to the partners, who were keen to see the building continue serving the community rather than being turned into flats and it all fitted into place, making sense for a dental and GP surgery to be within close vicinity.”

Their dad offered to put up the investment and the pair started getting down to the nitty gritty involved in the renovations and the Yorkshire Dental Suite was created.

However, according to Hassan, it was a massive gamble, fortunately they set up without an NHS contract or any promise of clients.

A slightly chicken and egg situation I say – they were getting on but missing two crucial elements: no patients and no dentists.


Their reply from the two highly driven entrepreneurs does not surprise me. They believed in themselves knowing they could get the patients and so they worked on the proposition to attract professionals.

“Dentists will come to work for the practice if first there are patients, secondly there is a great working environment and thirdly a superb culture. We met all those three things and for a dentist it’s like a dream plan because you don’t have to sit around twiddling your thumbs, put up with substandard resources or instruments because we invest in the latest technology. Dentists will only come to work for a practice when ultimately they can stay busy.”

Having started on just the ground floor with two surgeries, five years on they have spread to six surgeries over two floors with a patient database of just under 10,000. 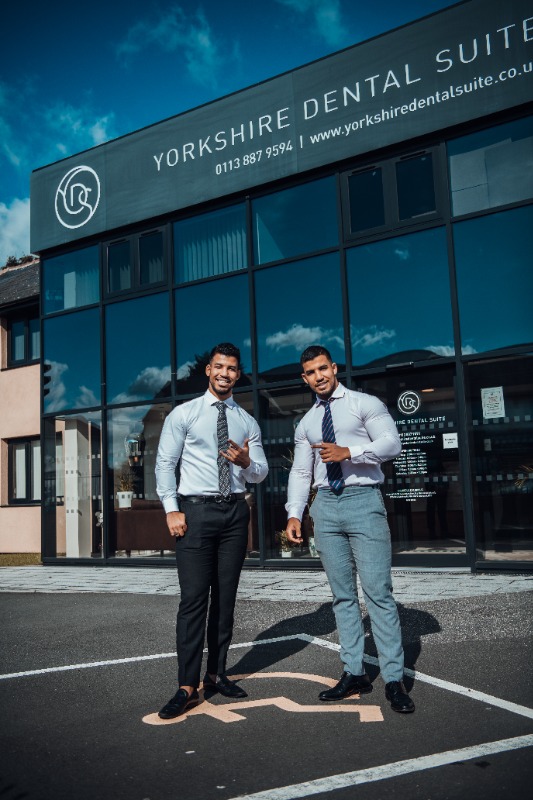 Everything I hear from the pair is inspiring. When I enquire about the business process and how they dealt with the PR and marketing it is more of the same driven response.

“We’re self-taught. We read loads of books, watched tons of YouTube videos, and got to understand what kind of message we needed to get out to the market. We clarified our proposition and basically got a social media, Instagram presence.

“We understood the elements around what good client service should deliver and that was fundamental if we wanted to see the growth we envisaged. It opened a whole new world of business. We kept on reading and learning, implementing the golden nuggets we discovered as we fine-tuned the business.”

“Obviously, some things didn’t work whilst others did, and we kept trying different things.”

It’s refreshing to hear how unconventional behaviours can work. The duo’s relentless intensity, living and breathing the project, sharing problems around the family dinner table helped them progress. “We are disrupting the market and a lot of clinics have seen our work, they’ve seen us on social media, they’ve heard about us, and it has forced them to increase their service and level of care to patients as well.”

Hassan and Hussein stopped practising dentistry wanting instead, to concentrate on moving the business to its next phase.

They are planning an ambitious expansion programme to open 400 new YDS clinics (via a franchise model) across the nation over the next three years. These new clinics will offer access to the best dental specialists and modern-day procedures including facial aesthetics, implants, teeth straightening, veneers, and complex surgical extractions and bone grafts.

Hussein Dalghous explains: "Until the eighteenth century there were no professional dentists. Dentistry was close to torture! It wasn't until the introduction of the NHS in 1948 that the British population had free access to dental treatment by which time treatment procedures had improved. However, we have come a long way since then. It is the new best in class cosmetic and restorative treatments that we want to make more widely available across the country.

"Dentistry is so predictable now for both the dentist and patient. The days of metal braces are gone, and patients can now transform their smiles in a discreet and stress-free way with treatments like clear aligners, whitening and composite bonding. At YDS, we have broken the mould with the way dental practices need to look and feel. Gone are the days of white, scary rooms that trigger the anxiety and horror associated with scary medical appointments."

Their focus is still as strong as ever which the pair see as fundamental in the next stage of their journey.

“We genuinely feel, without sounding big headed, we have been put on this planet to have a real impact and make a real difference.”

“Making our parents proud is really important because they have done so much to help us. I also have younger brothers. I want them to live, grow up and be strong contributors to society as well. One of our younger brothers is actually at the same university dental school we went to and hopes to become a dentist.”

“We want to spread a convincing message that the youth can make a strong impact across the nation, and we do really feel like there’s stuff going wrong with dentistry and that, together as a nation we can come fix together.

Hassan Dalghous says: ''YDS clinics will offer patients access to the most advanced techniques in general, cosmetic, and reconstructive dentistry rarely available outside London. And for those that want a dazzling smile, there's access to our new teeth whitening product which has radically improved the way whitening treatment is performed.

"With all of this set up, we hope to become known as the nation's smile doctors. The only downside is we may end up with less time in the gym!"

The twenty six year old twins, who started life on a council estate in Leeds, have established their practice as the number 1 ranked dental clinic in the UK on Google and have already attracted the interest of a TV production company.

To end I ask what piece of advice they can offer.

“My advice: to live a life that only 5% live, you have to do what 95% of people aren’t doing. So, for young people it is not all about clubbing but reading as well. And, if it were easy everybody would be doing it so be persistent, don't be resistant.”

With those wise words I’m off to the gym.