Snuggled within the Howgill Fells and the Yorkshire Dales National Park is Sedbergh, a small town that lies at the confluence of four rivers and where ancient trade routes once merged. Walking up the olde worlde Main Street, a road dominated by bookshops, you come upon the Black Bull, that in former times, was a 17th century coaching inn.

The unique looking building, it sets itself apart from the rest of the road, has a distinctive interior with its 18 bedrooms named after a local fell, with Japanese tubs, rain showers and bespoke furniture along with a fabulous 100-cover restaurant that is cementing its reputation as a fine dining establishment.


The Black Bull punches well above its weight in gastronomic and customer service excellence. It’s a long time since I have seen such an exciting and inventive menu.
It is the perfect spot for walkers and those looking to enjoy an epicurean meal.

If that isn’t enough, the gastro pub has four AA gold stars and a second AA Red Rosette for Culinary Excellence, and it is not hard to see why. 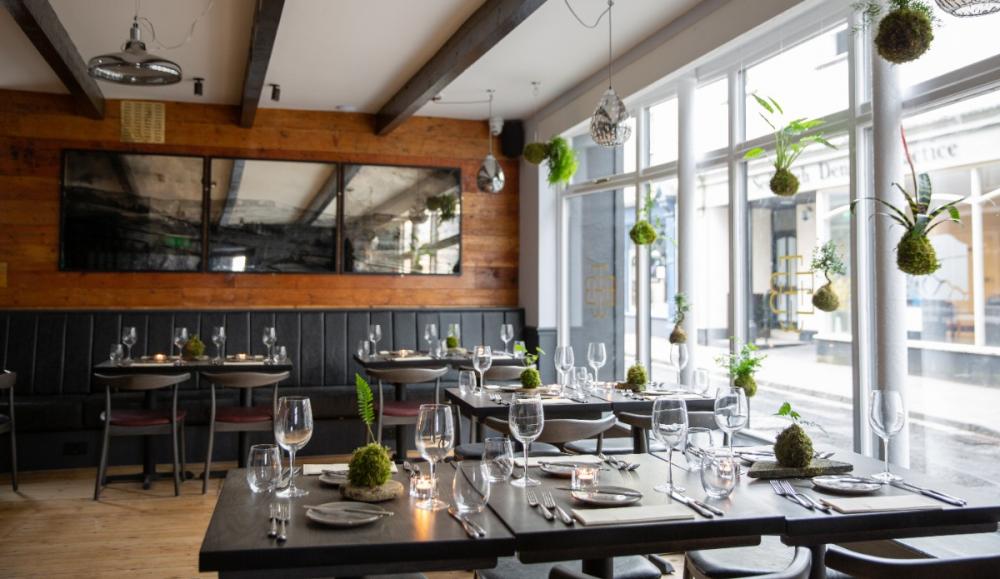 Ratcliffe, from an early age has been engrained in the cultural landscape and has a “great respect for traditional holistic land management and farming practice”.

Matsunaga was born in German to Japanese parents and those unique cultural influences are the basis for her cooking and, along with Ratcliffe, she understands the land, championing seasonally sourced ingredients. They like to “draw upon our living larder of wild and foraged produce, from local game to freshwater fish and hedgerow berries.”

The Black Bull punches well above its weight in gastronomic and customer service excellence. It’s a long time since I have seen such an exciting and inventive menu. The thrill at scrutinising the a la carte offerings made decisions difficult. The front of house, Camelia Voiculescu, was welcoming, and it’s good to be greeted by a Maître d' who is well-versed in the nuances of the menu and the extensive wine list. 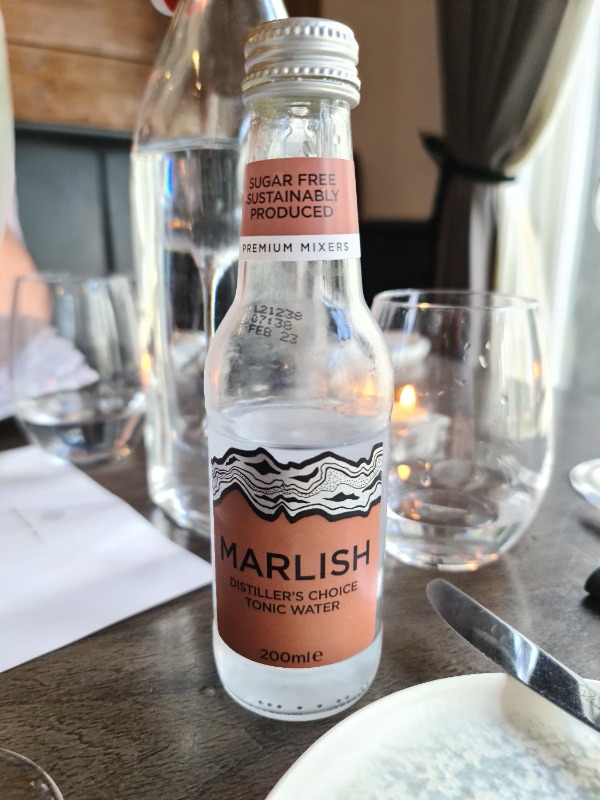 Opting for a pre-prandial, the gin came with a slightly bitter sugar free Marlish English Tonic, bottled at source on Marlish Farm in Northumberland, it was refreshing with the reduction in sugar, complementing the botanicals in another regional choice, Lakeland Gin.

As we were enjoying the G&T at our table a triangular hunk of homemade bread appeared. It was accompanied by golden salty butter, which strangely, brought the bread to life. I was left wondering where I could purchase the butter. Probably at the Three Hares Bakery & Deli across from the Black Bull owned by Ratcliffe and Matsunaga, which sells a selection of artisan and farm reared produce from the north of England. 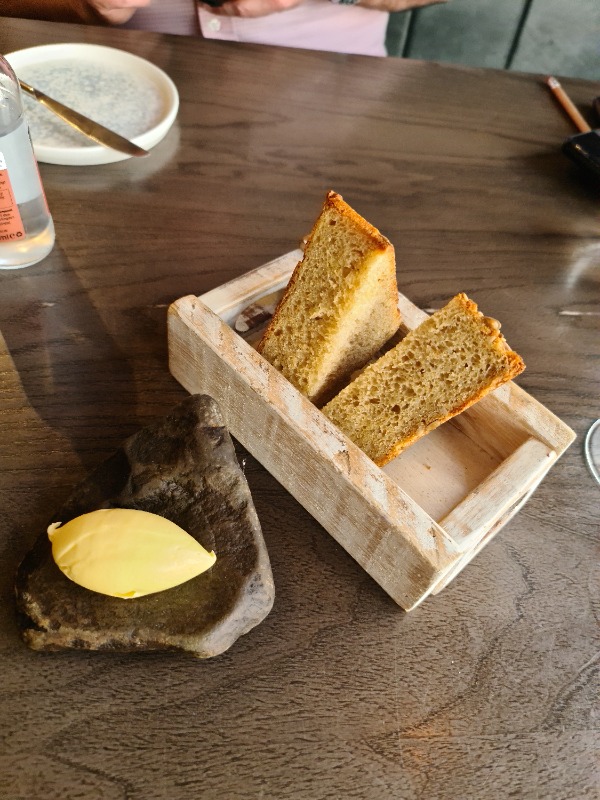 Turning to the exciting, inspired menu, each description whetted the appetite. Opting for the Scallop, Mussels & Thai Green Curry (£12.50) and the Guinea Fowl, Truffle, Spelt & Fermented White Asparagus (£11.50), we waited in anticipation.

The starters lived up to expectations awakening our sensory organs.

Presentation first class. The guinea fowl and fermented white asparagus certainly had Asian influences slightly piquant; the spelt added texture cooked perfectly. The appealing flavours combined well, nothing overpowered, and the delicate and subtle asparagus worked superbly. The scallop dish was sophisticated. Too many Thai dishes are often complicated, with one flavour dominating, this was elegant, a host of flavours coalescing with a wonderful sweetness each adding a little of its own individuality to the stylish dish. 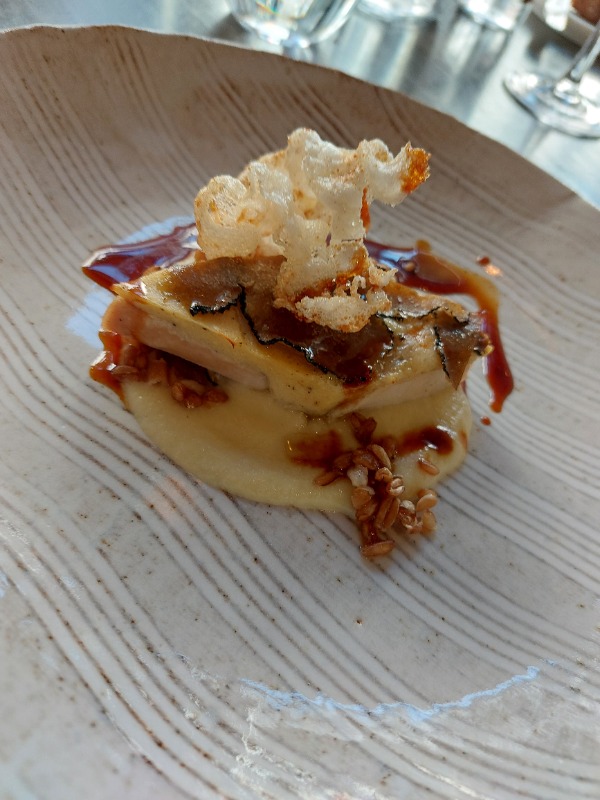 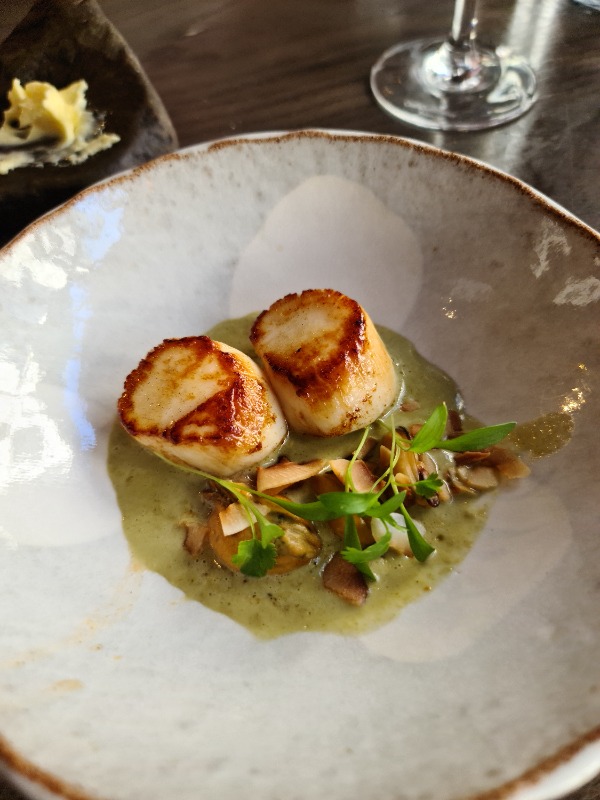 If the starters were hard to decide on, the innovative ideas offered by the mains proved to be just as difficult. They included stone bass, smoked eel, courgette, elderflower, and oyster (£27.50), a Howgill Hereford Beef Pie, Seasonal greens, and mash (£18.50) as well as salt aged duck, sweetcorn, girolles and cherry (£24.50) and accompanied with a roast fennel & herb salsa (£4.95)

Matsunaga’s take on a standard beef pie set it apart from the normal fare at gastro pubs, where a digestif is urgently need. Using the quality flavoursome Hereford beef impeccably cooked, the diced carrots adding a touch of sweetness all encased in, but not overloaded by, shortcrust pastry, served with a finely prepared and tasty mash. Interestingly, the restaurant was packed and looking around could I be forgiven for stereotyping, as I noticed the dish was one of the most popular on the menu, but surprisingly more females were opting for it? 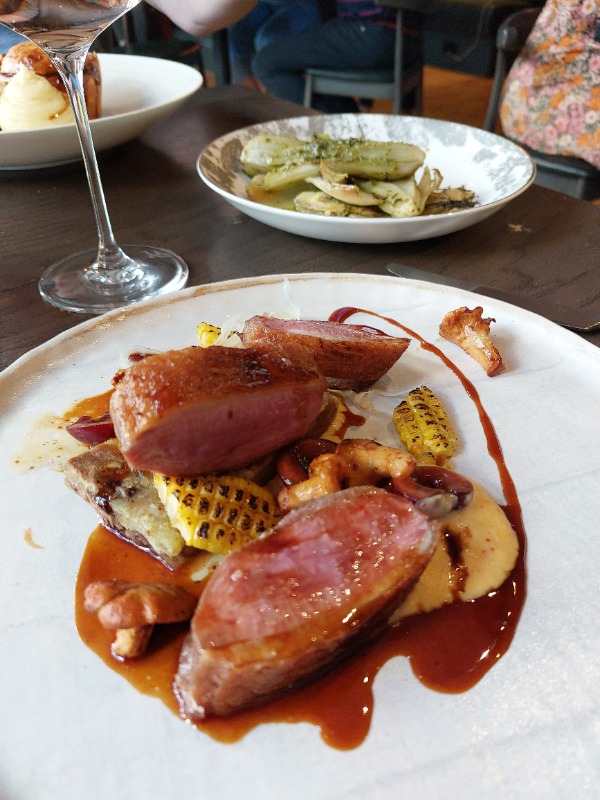 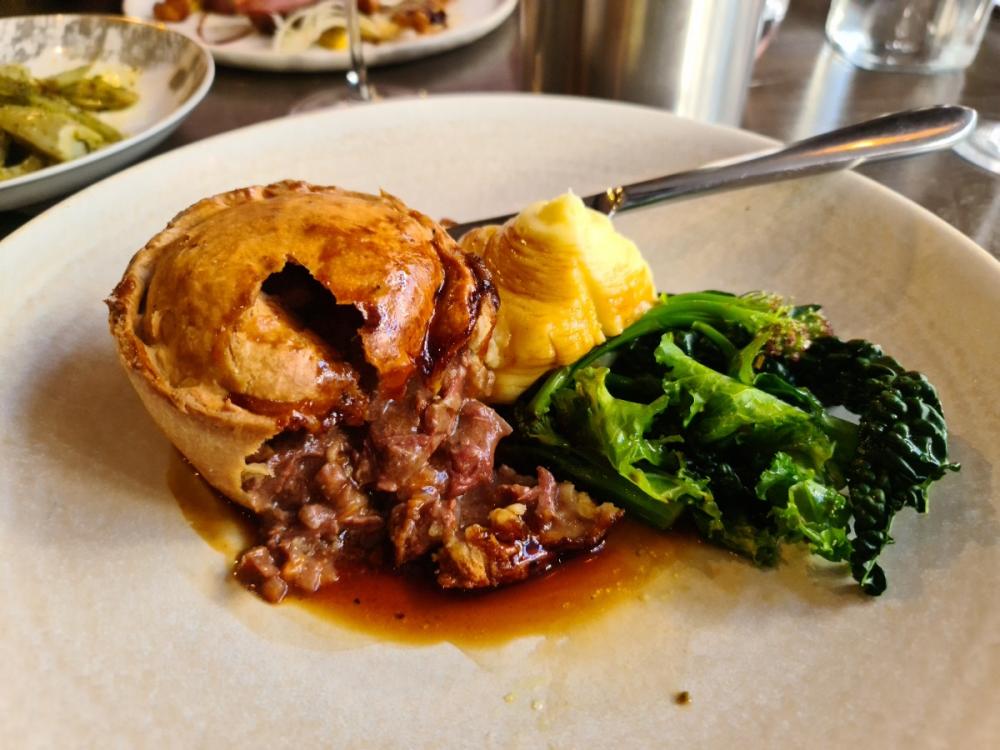 The duck excellently cooked had a couple of Matsunaga characteristic elements: texture and individual flavours combining superbly well to enhance a dish. A croquette of duck alongside cherries and girolles, and corn added texture, and the small slices of corn was genius. 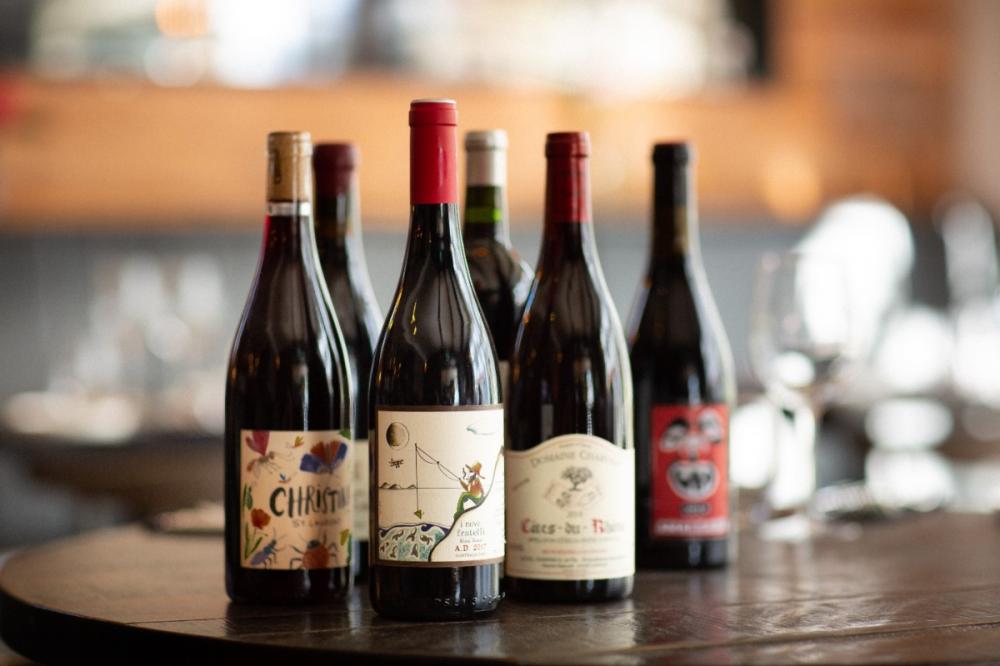 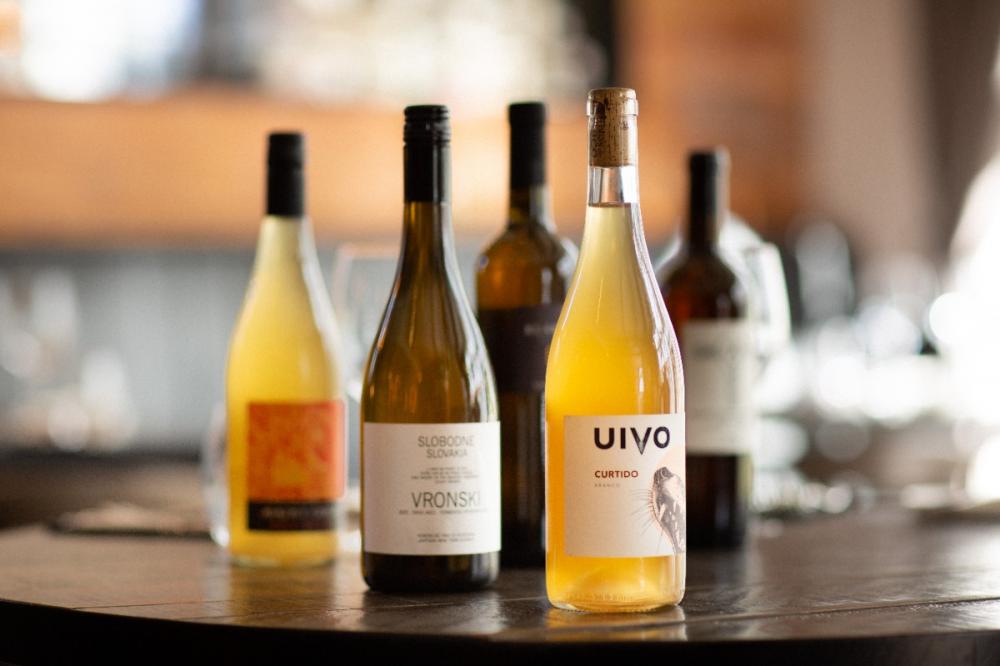 The wine list reflects the dynamic approach of this husband and wine team and their approach of not just settling for the obvious but striving for new and interesting flavours and producers. Wonderful to see chilled reds and orange skin contact wines among a fine list of rosés, reds, and whites.


... there is no doubt this fine restaurant has the pedigree to aspire to and achieve, a Michelin Star.
To reinforce Matsunaga’s attitude to seasonal produce, the desserts demonstrated this superbly well with a new addition – Gooseberries. Two new dishes sat alongside firm favourites such as sticky toffee pudding (£7.50), black sesame Panna Cotta with strawberry & Basil (£8.50) and an interesting take on Baron Bigod, which was torched and served with quince and apple (£7.50).
It was though, the gooseberries that drew our attention. Gooseberry, Elderflower & Honeycomb (£8.50) and Beetroot, Gooseberry, Sweet Cicely & Gingerbread (£8.50) were chosen bringing back a flood of childhood memories. When was the last time you saw gooseberries to buy let alone on a menu? The honeycomb was divine, with a collage of flavours and topped with toasted hazelnuts, as for the beetroot it was heavenly. The tartness of the gooseberries coupled with the thin layers of crunch from the beetroot refreshing.

Matsunaga’s connection with the environment makes this a place to travel to for great food. 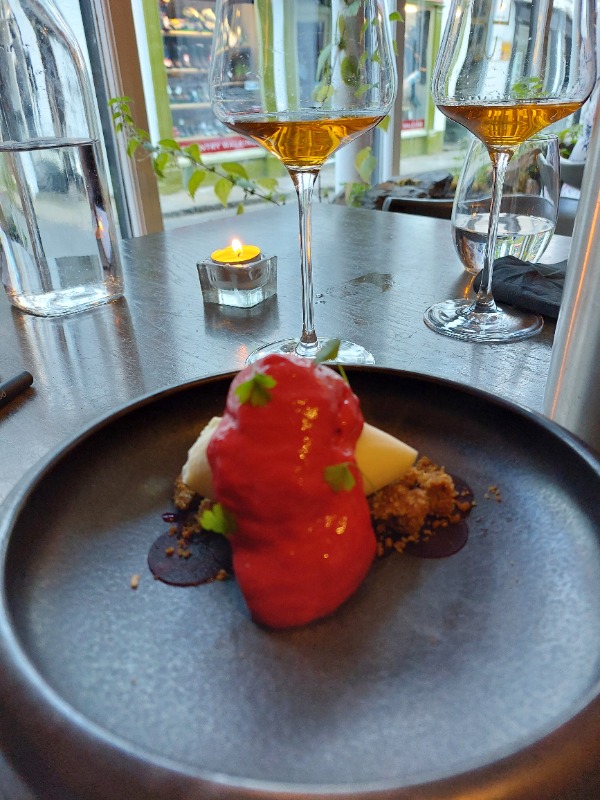 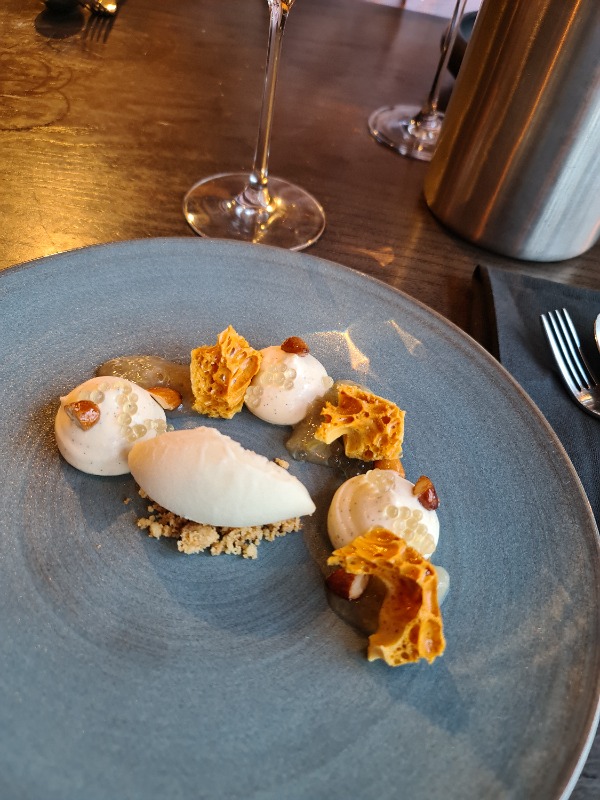 The other joy was the list of available dessert wines.
The Shiratama Umeshu blended with whisky (Plum Sake) Japan, with its fine bouquet was marvellous and, certainly to be recommended. Others on the list included Maruishi Jozo Miwaku Yuzu Sake another Japanese delight, superb and served with ice it’s the Japanese equivalent of the Italian limoncello and a French La Felur D’Or Sauternes from Bordeaux, good but not a patch on the Japanese offerings.

Matsunaga is a thrilling talented chef who works with fine, locally and regionally sourced ingredients ingeniously combining them to create imaginative dishes without pretension.

If there was ever a business card that tells you everything you need to know then it is Matsunaga’s menu: elegant, refined, original, novel, and artistic.

What more can one say?

I would hurry to the Black Bull in Sedbergh because with a few refinements and a rethink on strategy, they have conscience not wanting to alienate the locals, there is no doubt this fine restaurant has the pedigree to aspire to, and achieve, a Michelin Star. 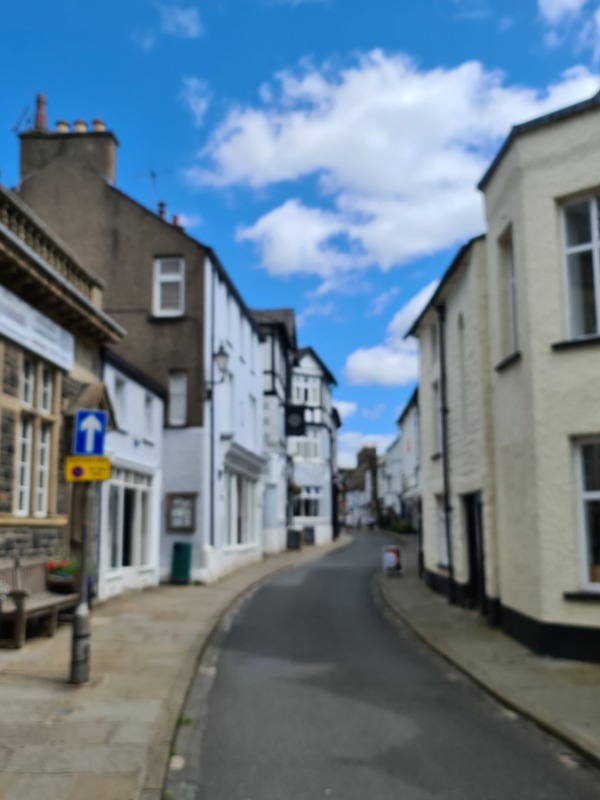 
Stables & Meadows – Outdoor dining at The Black Bull
The ‘Stables & Meadow’ is the outside space at The Black Bull where they offer a more rustic and relaxed experience. A separate street food menu offering sourdough pizzas and BBQ food, all cooked over wood and charcoal fires and served in the garden with spectacular views of the surrounding hills
https://www.theblackbullsedbergh.co.uk/stablesmeadows 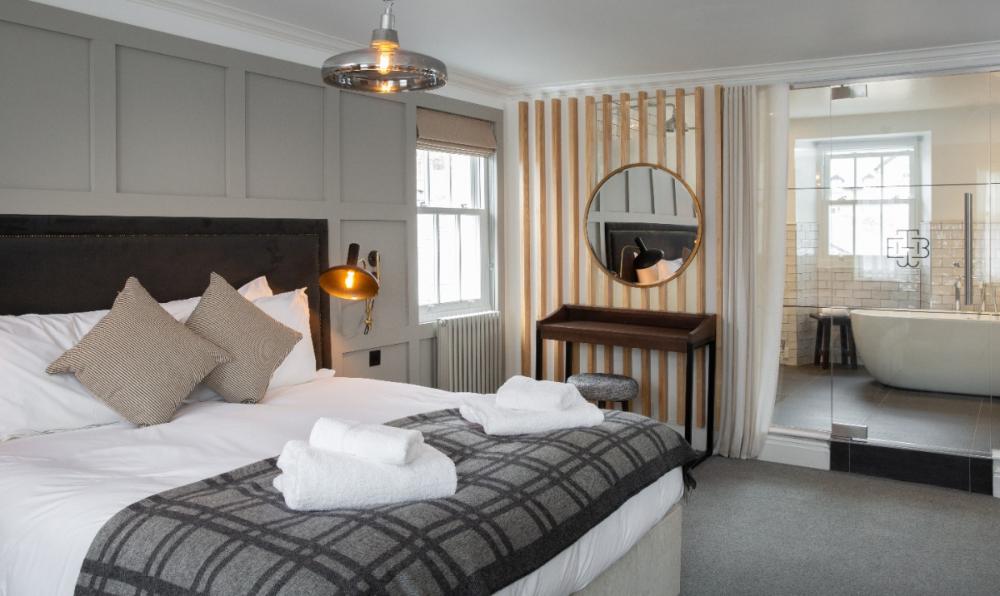 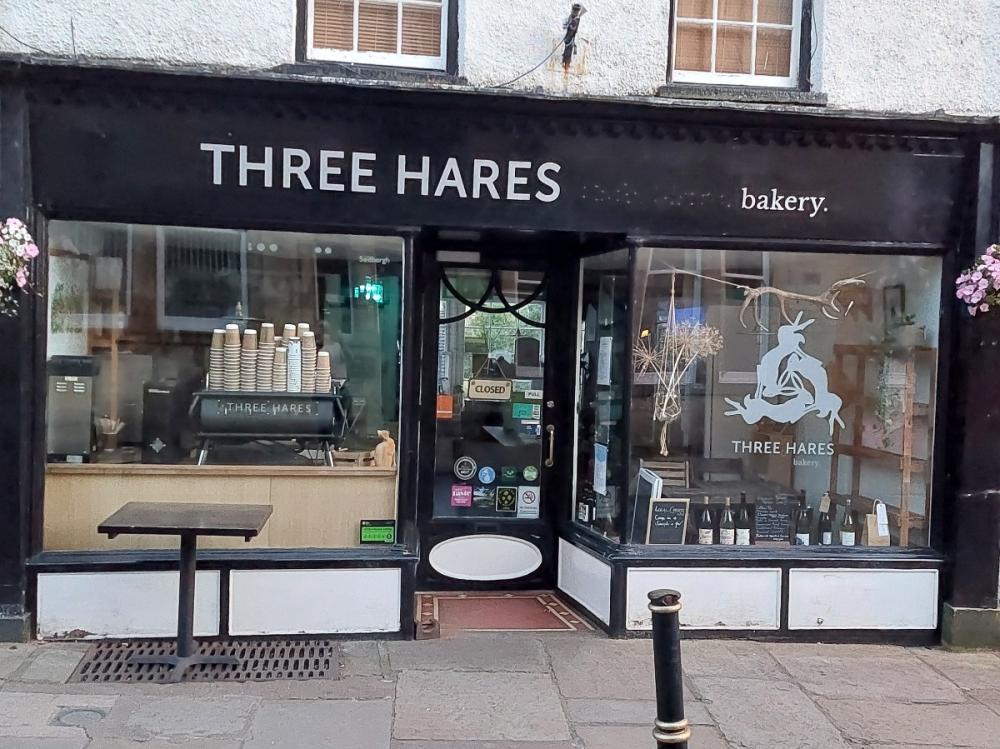