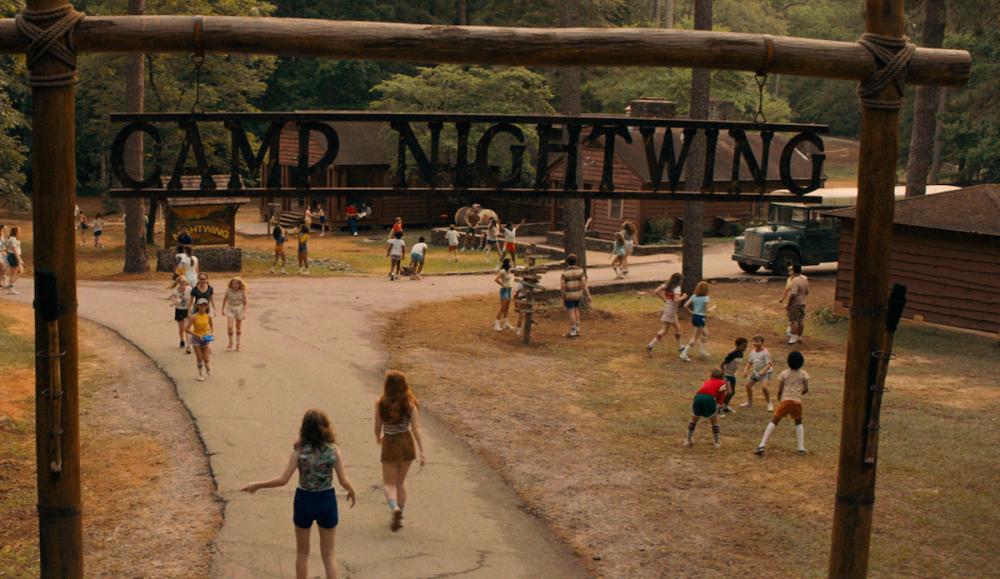 When we last left Leigh Janiak’s ongoing Fear Street Netflix horror story, the deceased Kate (Julia Rehwald) and Simon (Fred Hechinger) were blamed for the recent spate of murders, but Deena (Kiana Madeira) and her brother Josh (Benjamin Flores Jr.) know the truth, and that is that the vengeful spirit of witch Sarah Fier - who cursed the town after her execution in 1666 - is behind this. And when Deena’s lover Samantha (Olivia Scott Welch) is left seemingly possessed by the witch, Deena and Josh seek out local, Christine “Ziggy” Berman (Gillian Jacobs), a survivor of the massacre at Camp Nightwing in 1978, to find out how she survived the evil gaze of the witch!

Despite starting (and ending) in 1994, as part of the wraparound story, this film largely takes us hurtling back to that fateful summer in 1978 at Camp Nightwing, where a young rebellious outcast Ziggy (Sadie Sink plays this younger version of the character) tries to endure the intolerable camp experience, while her sister Cindy (Emily Rudd) opts more to fit in by any means necessary. However, when one young man goes on the rampage, these two sisters and their fellow not-so-happy campers from Shadyside and Sunnyvale, must all try and survive the brutal axe-swinging night.

Like Part One, the style is impeccable, and where the first had a rocking soundtrack of Iron Maiden and the like backing up its Scream-like postmodern slasher beats, this one relies on the retro synth and slice of Marco Beltrami and Brandon Roberts’ once again excellent score to back up its homage to summer camp slashers.


Also by Jack Bottomley...
Review: The Lost CityReview: The Nan MovieReview: The Phantom Of The OpenReview: Death On The NileReview: Scream
This sequel perfectly captures the aesthetic of the big name summer camp horrors like Friday the 13th, The Burning and Sleepaway Camp on which it clearly pays heavy tribute to. The setting is bright and sunny, yet fierce and foreboding, and the story much like the vastly underrated most recent season of American Horror Story, AHS: 1984, has an absolute ball with taking us back to these days, while bringing a modernised and effective jolt along with it.

True this may lack the original smarts and wit of Todd Strauss-Schulson's 2015 under-seen classic The Final Girls when it comes to its adoring throwbacks and warm send up/embracement of this genre, but this is still a hell of a lot of fun, as it develops its witchcraft story, as told in this chapter, through this late 70s-come-80s distinctive booming horror era lens.

The largely new roster of characters, based quite clearly and recognisably on certain archetypes of these kinds of films (in particular the Friday the 13th series), are great fun and Janiak once again shows how much she understands horror and its varying genres, and crafts a story that is entertaining, stylish and fun, but also with its poignant edges and tragic twists, which all add further meat to this developing story of a cursed town history.

As Fear Street: Part Two - 1978 reaches its climax, some blanks are filled in, regarding supporting characters, the lore behind the killers and Fier’s powers, and most enticingly of all, we are left at a point which promises an unusual, heartfelt and rewarding final chapter to come.

This was a brilliant follow-up to a great start, now let us see how this story of Fier comes to a close in Fear Street: Part Three - 1666.