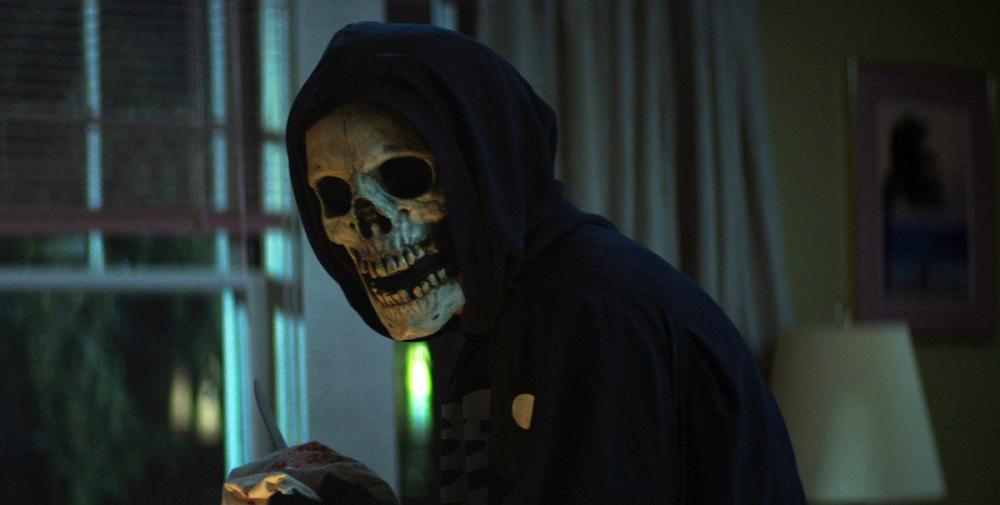 Leigh Janiak’s highly successful and headline-grabbing Netflix Fear Street slasher trilogy has come out of nowhere for me. Based on the book series by R. L. Stine, no doubt many were excited to see the story jump to the screen, I however was unfamiliar with the source material and the project, but something about it seemed very intriguing, and in this case, looks are not at all deceiving!

Kicking off with this first instalment, Fear Street: Part One - 1994, Janiak has channelled the likes of Wes Craven’s Scream and Stephen King’s It, to create a great start to her trilogy, and a film lovingly put together and rewardingly packed with grisly retro genre treats, as the premise already shows incredible potential going forward.

In 1994, the sinister and murderous past of the perpetually unlucky town of Shadyside once again rears its head, with a shopping mall massacre and skull masked killer. This further expansion of the town’s bloody legacy shakes its inhabitants, and young lad Josh (Benjamin Flores Jr.) is convinced all these murderers over the years and the death toll they wreak, is all down to Sarah Fier, a woman executed for witchcraft in 1666, who - according to local legend - placed a curse upon Shadyside. His big sister Deena (Kiana Madeira) is less convinced of a curse and more convinced that life just sucks, but when she attends a vigil at the neighbouring town Sunnyvale with her friends, events start to spiral and they begin to think maybe there is something to the legend of Fier.


Also by Jack Bottomley...
Review: Ghostbusters: AfterlifeReview: DuneReview: CandymanReview: Snake Eyes - G.I. Joe OriginsReview: Jungle Cruise
Taking the postmodern elements of glorious slasher homages like the aforementioned Scream, this witchcraft-based story is a lot of genre-adoring fun. As the initial killer is shockingly revealed early, the film takes on a different premise and the concept of a cursed town and its past killers coming back to hunt a “chosen” one is confidently delivered, but what makes it flourish is a sensational cast and their fun characters, all with a real chemistry. You care for the core group at the centre of the movie, and that makes some of the bloody jolts and twists all the more effective (and even cruel), as they boldly roll on later in the film.

Madeira as Deena is a brilliant lead to the film, while Flores Jr.’s Josh is someone you really want on your team in a undead murderer uprising! While Olivia Scott Welch as Samantha - Deena’s girlfriend - offers fantastic support, and her relationship with Deena becomes the very real timely heart of this story, which celebrates difference and diversity, in a warped Halloween-esque horror story. There is also some outstanding supporting turns by Julia Rehwald and Fred Hechinger as Deena’s uproarious but caring mates Kate and Simon.

The pieces are all in play in this first offering, with the lore behind the film’s murderous bogeymen being slowly but surely established but many questions left to be asked. Phil Graziadei and Leigh Janiak’s screenplay knows and understands good horror and relishes embracing a wide array of influences and inspirations, in this nicely shot and entertaining start to a story that already is right up my fear street...so to speak.