Father of modern architecture: The Guggenheim.
In the adage that art is subjective; some visitors are lost for words when attempting to describe the iconic Guggenheim Museum in Bilbao. But, love or hate it, this is an experience not to be missed from your bucket list as our Time for Life Correspondent, Sharon Cain, reports.

Bowled over by the magnificence of Bilbao, a treasure of the Basque country, Sharon relished the architectural splendour of the museum - which has reinvented Bilbao and celebrates its 25th anniversary in 2022 - but was underwhelmed by the exhibits.

Since being mesmerised by the Guggenheim in Venice and devouring the gripping Dan Brown Thriller Origins which commences its enthralling page-turning journey in the Guggenheim, our expectations were sky high.

Anticipation was further enhanced by a prolonged wait due to the pandemic, so when we finally rocked up in Bilbao in our motorhome and travelholic golden retriever Bracken, it was all systems go.

The fact that Frank Gehry’s masterpiece has transformed Bilbao from an industrial wasteland marred by acts of terrorism - into what is arguably the world’s most influential building - is undisputed.

The anticipation of the first sight of the shimmering structure made up of almost 43,000 titanium panels delivered a frisson of delight and high expectation. 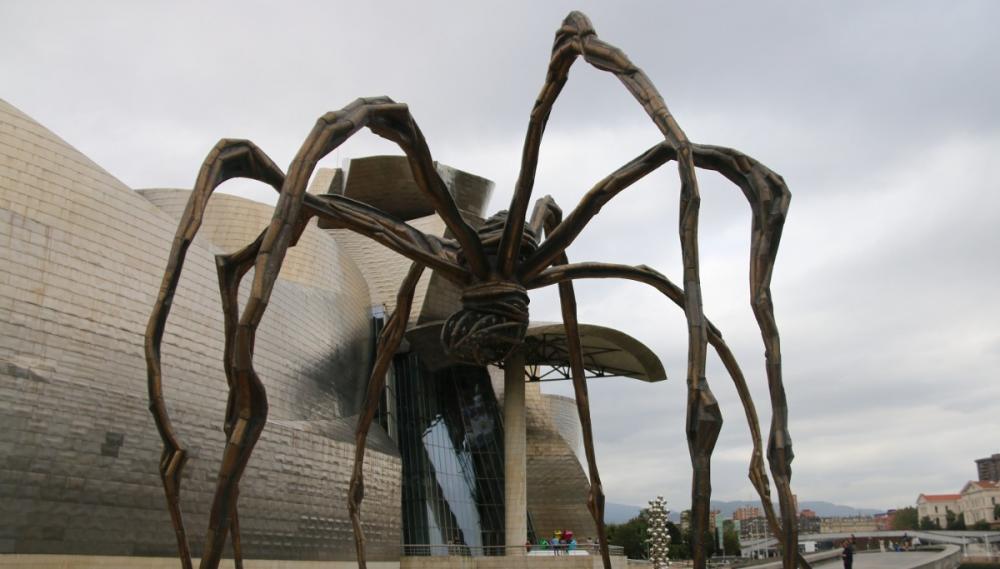 Travelling with a golden retriever often elongates sightseeing and taking it in turns to visit the museum gave us more time to enjoy the external exhibits which included the enormous Maman spider which proudly stands at 9 metres tall.

The most acclaimed work of French American artist Louise Bourgeois, it was made of bronze, marble and stainless steel as a loving tribute to her mother who was a weaver.

Originally commissioned for the Tate Modern in London in 2000, the artwork was enjoyed and photographed by a raft of visitors who bought miniature spider souvenirs from street vendors. 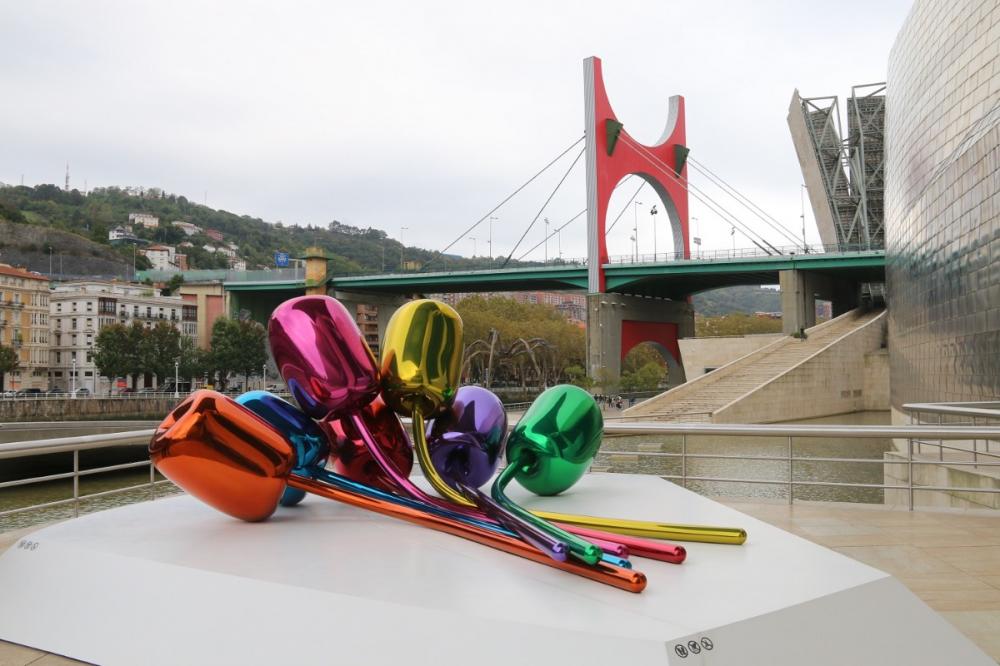 Unfortunately the iconic art which is bedecked with over 70,000 vibrant plants was undergoing a $100,000 fundraising renovation to replace and repair all the components which hold over 25 tons of soil and are watered by an internal irrigation system.

Another great work in Koons extensive stable is ‘Tulips’, a colourful bouquet of balloon flowers over 2 metres tall and 5 metres wide. Located at the back of the Guggenheim, they were designed to evoke childhood celebrations of parties. 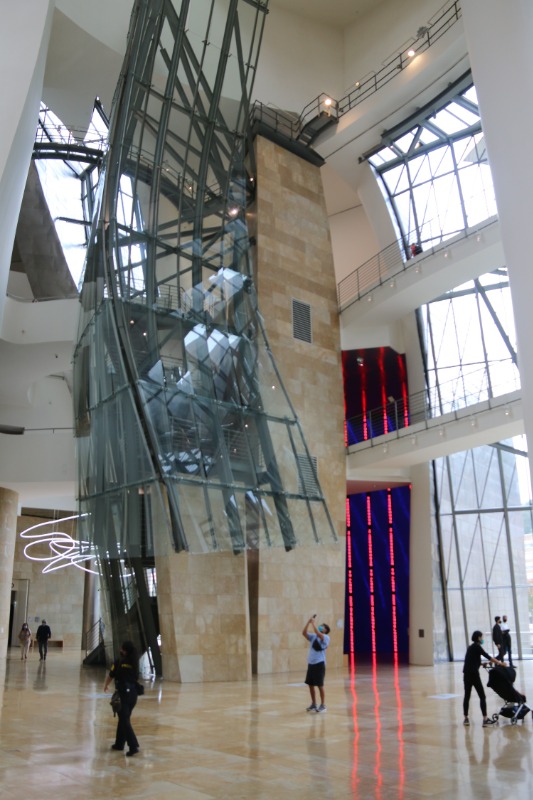 The nature inspired Atrium is flooded with natural light is truly breathtaking. It is designed across three levels which are linked via curved walkways, titanium and glass elevators, and staircases.

The building features 20 galleries but only two of the three floors of exhibits were open during our visit.
Art critics and visitors alike have commented on how the Guggenheim’s external structure is more artistic than the actual exhibits - opinions I agree with.

The first exhibition - Cecilia Bengolea’s ‘Animations in Water’ was intriguing in how the multidisciplinary artist, who fuses video, choreography, and sculpture, explores moving images redolent of cinematic figures which appear and disappear.

Exhibits by household names included ‘Hickiko Happo Sumi ink on nine canvasses’ by Yoko Ono, who played a key role in New York’s eclectic art world in the 1950s and 1960s. I must admit being underwhelmed by the majority of displays despite but pleased to have experienced them.

Absorbing Bilbao’s buzz and energy is liberating and exhilarating. Also enjoyable is taking in the various architectural styles marking the renaissance of the city where renowned architects leaving their mark include Sir Norman Foster who designed the Metro de Bilbao.

Among the city’s architectural landmarks are the impressive Casa Montero, a historic monument built in the the early 20th century and known as ‘La Casa Gaudí’ because it resembles Gaudi’s design style. 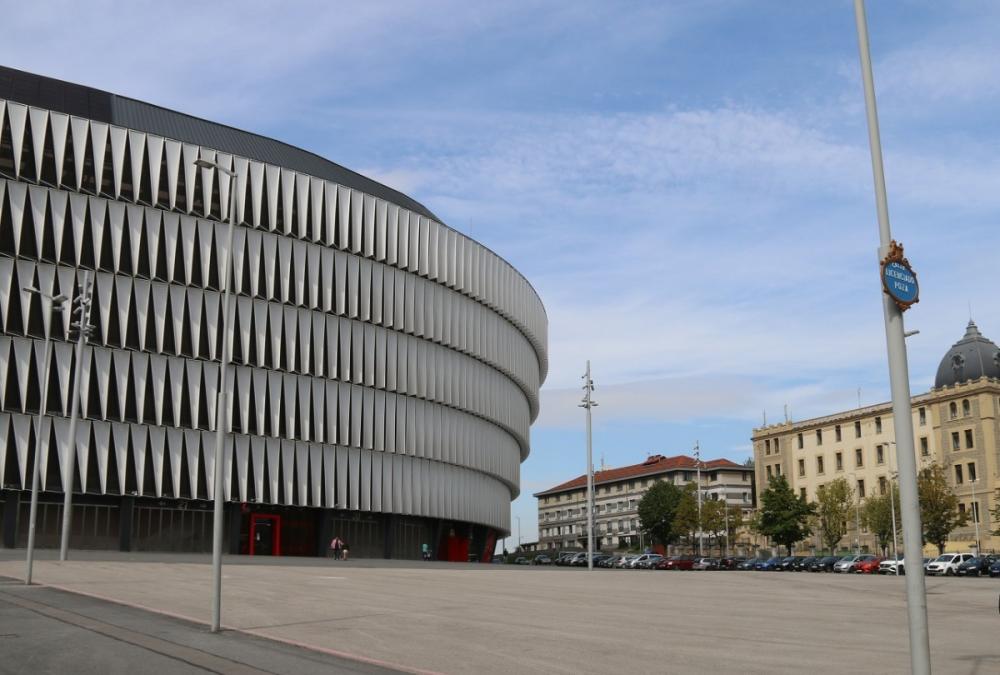 Top of its game: San Mames Stadium.
Football plays an intrinsic role in the lives of local people and the city’s architectural feast extends to the futuristic San Mames Stadium, home to Athletic Club of Bilbao. One of the biggest clubs in European football which has undergone a €211 million renovation, the club is proud of it reputation of consistently remaining in the first division of La Liga football league.

The city’s creativity extends to street art with graffiti and murals in abundance in this hotbed of urban art where artists express their work on buildings, walls and bridges. The Bilbao la Vieja area in particular provides an explosion of colourful street art.


Pinxtos: Basque country delights.
A visit to such a sensory city is not complete without savouring the pintxos, a wide array of delicious snacks found in Northern Spain and the Basque country. An important element of socialising, this type of finger food goes down a treat with a pre-dinner glass of something. Similar to tapas they are distinguishable by toothpicks attached to bread, meats, cheeses and fish.

Like every other aspect of this arresting city, an eclectic of accommodation is available. Normally cities are challenging for motorhomes due to height restrictions in car parks and lack of camping sites.


Cityscape: our view from the hostel car park.
We found the perfect solution in Bilboa Hostel which offers limited space in a closed car park with security cameras and electric hook up along with shower and toilet facilities in the main building.

Just 25 minutes walk to the Guggenheim the cost was just ten euros a person (the dog was gratis) which also included spectacular views over Bilbao and an adequate continental breakfast served in the canteen the next morning.

A proverbial tour de force, this addictive city - guaranteed to leave a footprint in your memory bank -is simply ‘sensacional’.

You can follow Sharon’s eclectic travels on www.leaveworktotravel.com
Also by Sharon Cain...
Wanna Be An Extra? Morocco’s Movie Making MagicLisbon: The Ultimate Lifestyle DestinationTake The Hump Or Make The Jump?What New Highs Will You Aspire To?Sensational: Sunrises, Sunsets, Seafood
More in this series...
Wanna Be An Extra? Morocco’s Movie Making MagicWhat New Experiences Will Blow You Away?Coastal And Country Treasures: Northumberland’s WonderlandSomewhere For The Weekend : ‘La Dolche Vita’ Welsh StyleWeekend Away: Northumberland: Where Ewe’ll Be Warmly Welcomed!Is Motorhoming For You? – Here’s What Not To Do!Sunshine Beaches And Splashing Waves: Perfect PanaceaBack In Blighty After 2,000 Mile Marathon Across Spain And FranceHomeward Bound - A 96 Hour Journey To The UKWeek 3 Of The Spanish Lockdown: Tips As Cases Surge To All Time HighSpain Closes Ports And Airports And Extends LockdownLa Manga ClubCadizCórdobaVisiting Sierra De Cazorla In AndaluciaFlamingos FantasticosAlluring AlicanteThe Orihuela CostaNorthumberland: A Coastal, Castle And Canine Wonderland