Jane Richmond is an artist and ceramic sculptor whose mixed media approach allows her to explore her artistic response to feelings, ideas and concepts through a variety of methods: her painting and sculpture both inform and develop one another and they each have their own aesthetic appeal. 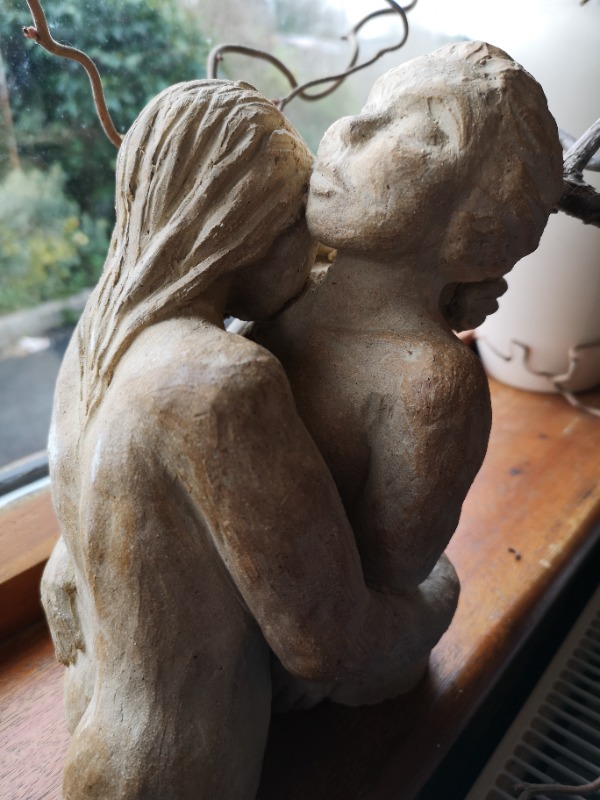 After a 33-year career in education, the loss of both her mother and best friend caused her to take stock of her life and she decided that after years spent enhancing the lives of children and young people, it was time to focus on her own ambitions. Bravely choosing to dedicate herself to a new career in art, she began by building a studio in her garden, producing a portfolio and approaching Lancashire galleries with a view to exhibiting her work. Her first solo exhibition was at Urban Arts Studio in Lytham that expanded her flourishing network of contacts and colleagues, and she continues to exhibit work at venues across the county. She also wants to develop national and international exhibitions.

Her choice of media depends on her own response to an idea, or inspiration, and they each provoke a different way of engaging with the project. She primarily creates what appeals to her personally – in painting her choice is often flowers – for Jane their allure is that they often appear almost architectural or sculptural. When depicted in acrylic, she uses large canvases that require a lot of physical activity – throwing or dripping paint to create interesting backgrounds and using large, sweeping brushstrokes to create the floral image. This work, she says, is full of energy, whereas when working with watercolours and silks, it’s a calmer process encompassing more traditional techniques. She is drawn to the human form for projects in sculpture; her aim is often to convey a feeling or evoke a mood such as reflection, wistfulness or sadness. For her it is a more ‘spiritual’ activity, providing a sense of grounding; the tactile nature allows her to engage intuition and she tries to place into the sculpture a form of ‘emotional content’ that is not usually found in her paintings. 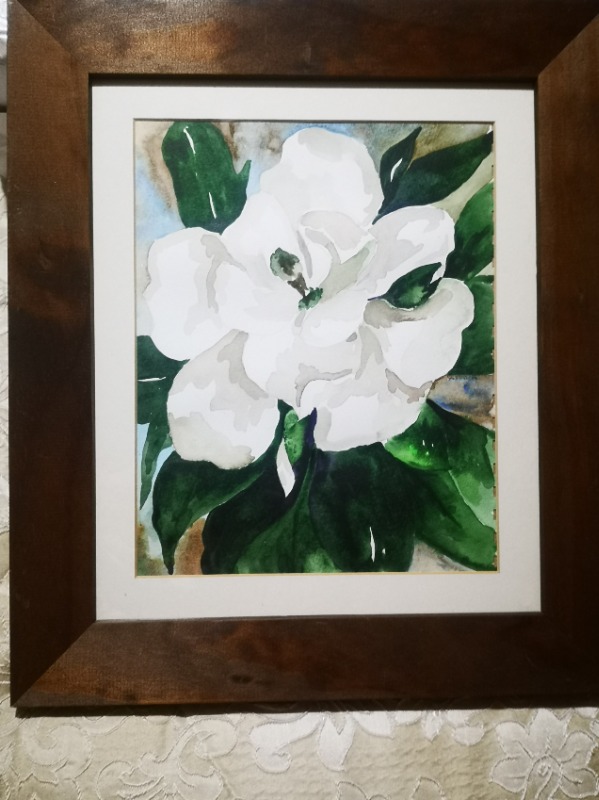 Jane also works to commission, which can push her out of her comfort zone, allowing her to experiment, to broaden her range of techniques and can often inspire a change of direction or diversification. Creative freedom, she says, is essential to an artist and she therefore enjoys using the various media to produce pieces that appeal to different audiences. Her work in acrylic is often bold and contemporary, whereas silk paintings and watercolour require delicate handiwork, they cannot simply be painted over if a brushstroke is unsatisfactory, unlike when working in acrylic.

The acrylic pieces are always large and impactful, measuring up to a metre square. She creates an abstract background with a considered colour palette, and she will usually paint only a single or a few flowers on a large scale – she favours those that strike her as particularly ‘sculptural’ i.e. calla lilies, irises, peonies or daisies. Those familiar with the work of Georgia O’Keeffe will recognise the influence that Jane draws from her work – Jane loves O’Keeffe’s use of colour and form. 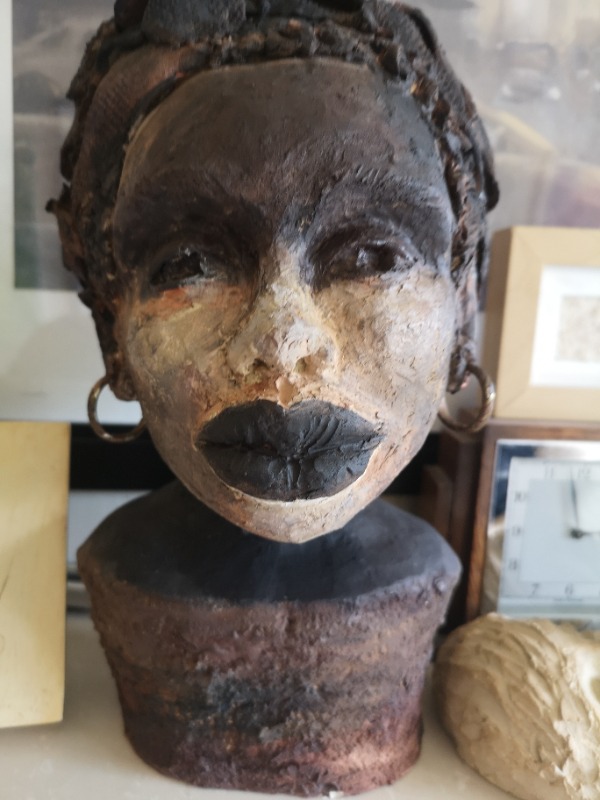 In sculpture, Jane likes to explore the diversity of the human form. Her work therefore depicts individuals of varied heritage, different body shapes, sizes, skin types and both heterosexual and lesbian/gay couples. Her aim is that the pieces are sensual as opposed to sexual; she makes both textured and smooth-finished pieces depending on what she feels works best for a particular piece. She sometimes leaves the sculptures in the ‘raw biscuit fired state’ (bisque, or biscuit firing is the first firing of ceramics in a kiln, after which glaze is usually applied) or she uses colour often using drip iridescent colour over the piece – both are distinctive features of her sculptural work. She does not attempt to portray realism, it is instead stylised and whilst she concedes the influence of art deco is recognisable in her work, it is not a pastiche of art deco work, more her own, modern interpretation of the style. Another favourite artist of Jane’s is Tamara De Lempika, her distinctively iconic art deco figures are particularly appealing. Jane has also created a range of pieces entitled “A nod to Brancusi” which are her own interpretation of the work by Constantin Brancusi whose use of material and simplicity of line in his sculpture Jane describes as ‘sublime.’ 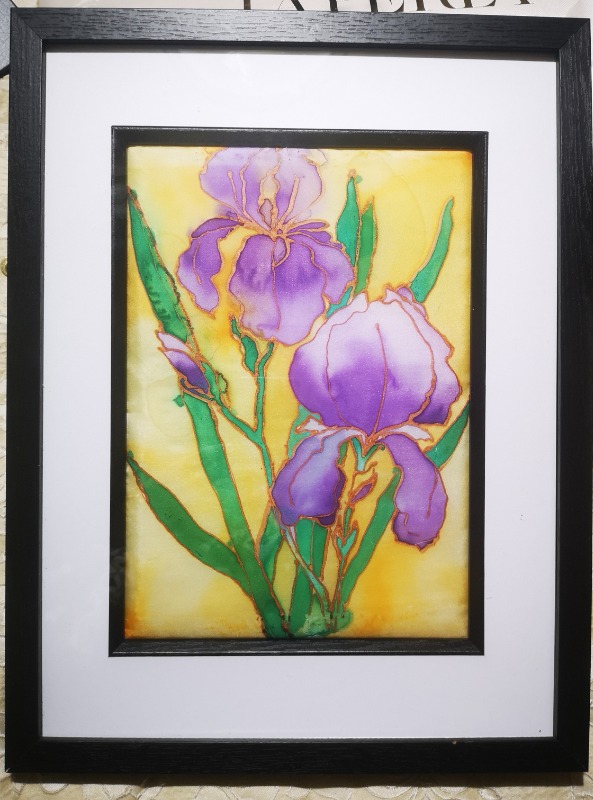 An important milestone in Jane’s artistic career was her appearance on the BBC television show Home is where the Art is. The premise is that clients commission a bespoke piece of art at an affordable price: they give competing artists a short brief and the opportunity to ‘snoop around’ their home for clues. The chosen artist has their commissioned piece bought by the client. Jane’s winning piece was an art deco style bust of a woman in colours prescribed by the client, but in it she combined symbolic elements that would not be immediately obvious to the casual observer. The client had asked for a piece to depict new beginnings and Jane’s sculpture included Japanese cherry blossom, a Manchester bee and pearl earrings, all of which had personal significance to the client.

Original art, Jane believes, is hugely important in the modern world, it ‘provides stimulus in (an otherwise) grey world and represents the emotions and struggles in society today.’ Last year she created a piece entitled ‘Self Love’ that drew a lot of comment: it is a ceramic figure of a woman hugging herself that Jane feels spoke clearly to many about ‘their feelings and unfulfilled needs during the pandemic.’ For the artist, Jane feels art provides greater wellbeing and a creative outlet to explore the ‘narrative of current times (based on) observations on life in the here and now.’ She recognises that digital art has a resonant appeal in the current climate, but Jane feels a physical piece of art can bring a ‘sense of connection with the environment, nature and human emotion.’ 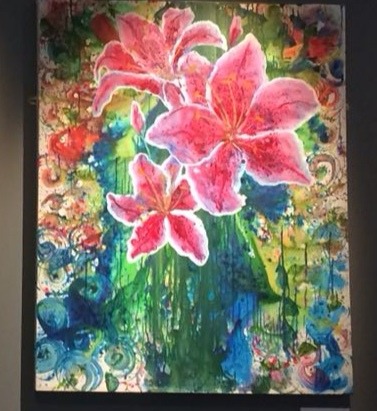 In Lancashire Jane is delighted to see ever increasing numbers of young artists engaging in the art scene. There is a lot of digital art being produced and through social media, artists can easily network – providing relief to what can be a solitary existence as an artist. She enjoys the flourishing crafts scene with many talented artisans selling their wares both online and, in normal times, at craft fairs. Whilst the county has no discernible influence on her own work, her artwork is a Lancashire product through-and-through, with the plinths for her sculptures produced locally in Colne.

Most art exhibitions have been cancelled in the past 12 months; however she believes they will ‘explode into action once the restrictions are lifted.’ Despite restrictions, Jane has taken part in an exhibition called “Hivejacked” in which members of the group, Hive Arts, worked with Blackpool Council to install large scale posters featured at the 24 tram stops along the Blackpool promenade. She is also due to join an exhibition of the work of a Burnley based artist group at Townley Hall in Burnley in 2020, but this has been indefinitely postponed until restrictions lift. 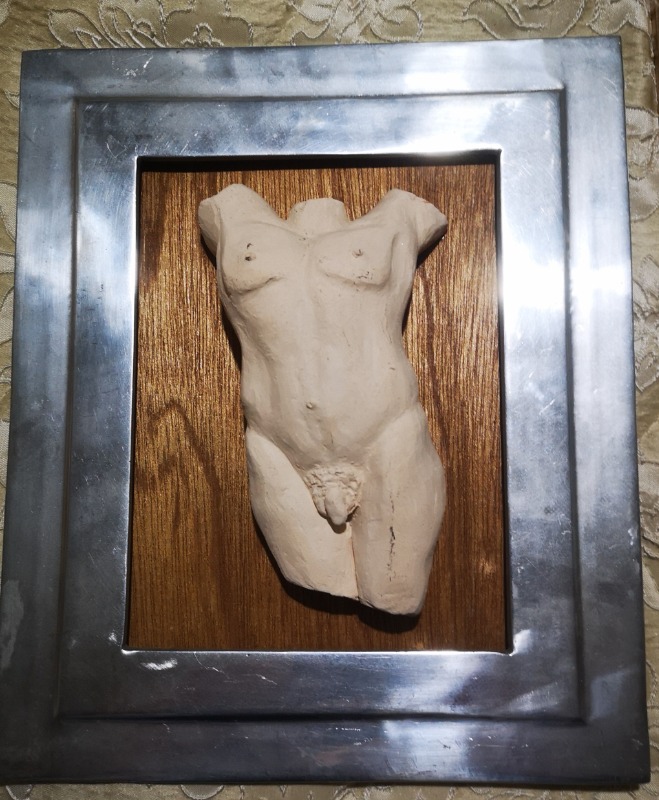 During the pandemic Jane has been able to dedicate more time to creating art which she says has been her ‘saviour’ in terms of her wellbeing. She has engaged more with social media which has led to increased sales but also a continued expansion of her professional network. When she began as an artist, she says that solitude and loneliness would often pose a problem and of course being a professional artist is like any other self-employed profession, requiring long hours, hard work and dedication. Whilst every minute spent running a business ‘interferes’ with the creative process, she does count herself incredibly fortunate to be paid for what she loves to do.

Jane can provide art tuition, either one-to-one or in small groups - her pupils range from the very young to octogenarians. She has also done workshops and demonstrations to larger groups, and can provide ceramic sculpture packages, providing tuition very much tailored to the student’s requirements. However, she has made a conscious decision in not becoming fully immersed in teaching – having left a successful career in education she wanted to focus on her own artistic development, to be taken seriously as a professional artist. In recent times Jane has developed a new business called Artistsinc, with an artist colleague which incorporates the ashes of deceased loved ones or pets into a painting or sculpture. Further information can be found here: https://facebook.com/artistsinc

In usual times Jane regularly exhibits her work at Legacy Arts Gallery in Todmorden, at the Pendle Artists quarterly exhibition and with HiveArts in Blackpool. With so much uncertainty still on the horizon, Jane is currently developing pieces for future exhibitions as well as working to commissioned pieces.