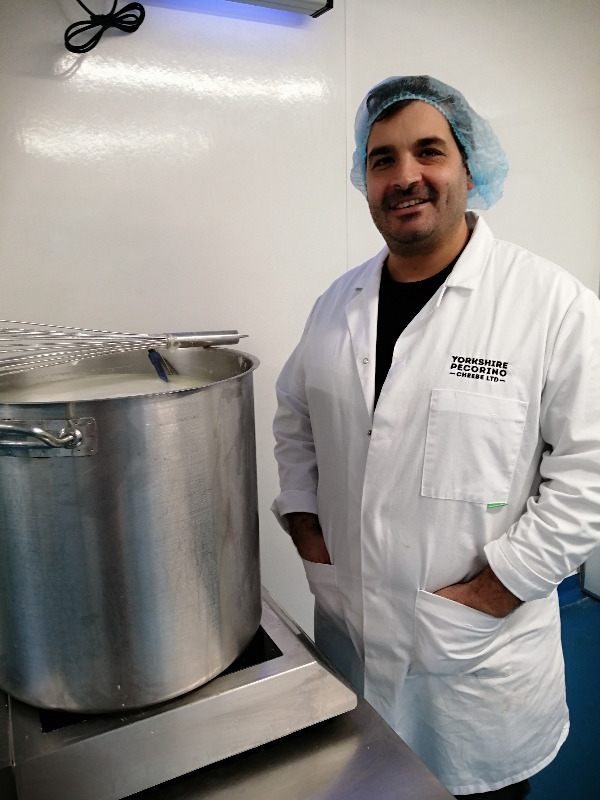 Mario at work
Last February, I wrote about meeting Mario and Sonia Olianas and learning more about their impressive business, making Sardinian-style pecorino cheese in Leeds. At the time, they were looking for larger premises but within a couple of weeks of that article being published, the government advised people not to gather in restaurants and bars, and our hospitality industry went into lockdown. Now that life is returning to a more normal pace, the business has finally moved to Otley, and I went to see how they were doing.

Back in February 2020, Mario had virtually all his orders cancelled overnight, meaning he could clear no space in his maturing room for new cheeses and had lost all income from his work. On hearing this, my first response was to ring and offer to buy a couple of truckles from him. Cheese like Mario’s is too good to see wasted. Although my few quid was not going to make any real differences to the family finances, Mario and Sonia had shown me kindness and hospitality, and I wanted to show some support in return.


photo courtesy of Delicious Yorkshire
needn’t have worried. The young man who arrived in the UK with just £200 and a bag of clothes may be older now, with a home and family to maintain, but he has lost nothing of his resourcefulness or drive. When I went over to see the new premises a couple of weeks ago, Mario told me how they’d got through the downturn. “If the work isn’t given to you, you look for it…. I did what I used to do: I went knocking on doors again.” One of Mario’s early business ventures was to deliver quality Italian ingredients to your home. Anyone who has seen him on the markets will be familiar with the Olianas Gusto Italiano range of cured meats and other products, and Mario boxed these up, with portions of his cheeses, into home-cooking packs and cheese boxes for delivery around the area. “We started Gusto Italiano in the credit crunch, so we knew how to make it work.”


Image courtesy of Yorkshire Pecorino
Another immediate decision Sonia and Mario took was to cut the price of their stock of cheese. By offering special discounts online and via The Courtyard Dairy, they were able to free up space in their fridges and continue making cheese. This choice has had huge implications for others. Their milk supplier would have let his ewes go dry without Mario’s custom, and it would have taken a year or so to get the herd producing milk again. In that first week, he contacted the dairy and offered to buy all his production, thus keeping in business one of the few ewes’ milk dairies in the region.

Without the farmers’ markets or trade custom, Mario had to find new outlets for his products. As with so many businesses, online sales became very important. He also sold directly from his home, creating a pop-up stall in his driveway on two occasions. These were advertised through social media and drew custom from as far away as Manchester and Sheffield, people who drove to Leeds solely to buy his products. On the day I went, the queue stretched over a quarter of a mile, and Mario tells me that welcomed between five and six hundred people to those pop-ups.


photo courtesy of Delicious Yorkshire
Mario is quick to acknowledge the support he has received. He names friends and Leeds cheesemongers George & Joseph, who helped with packing and delivering, and Andy Swinscoe from the Courtyard Dairy. I note with a smile that Andy had made sure Mario’s Leeds Blue cheese featured prominently on display when Fred Sirieix filmed Remarkable Places to Eat there recently. Mario speaks warmly of new customers and new outlets who have found his business during lockdown, but he is free from any kind of false modesty: “If you do something right or good,” he says, “people will come to you.”

Never one to stand still, he has been developing new products during lockdown. He has added Ewe-mi, a halloumi-style grilling cheese, and Holy Ewe, a partly-aged cheese that has a deep, fruity flavour. On the day I visited, he was working on something else to add to his range. Although at first her refused to say what it was, he struggled to contain himself, in the way that a child cannot keep secret a surprise he has planned. Eventually failing, Mario swore me to secrecy. All I can say is that the new cheese will be very special when Mario perfects it. 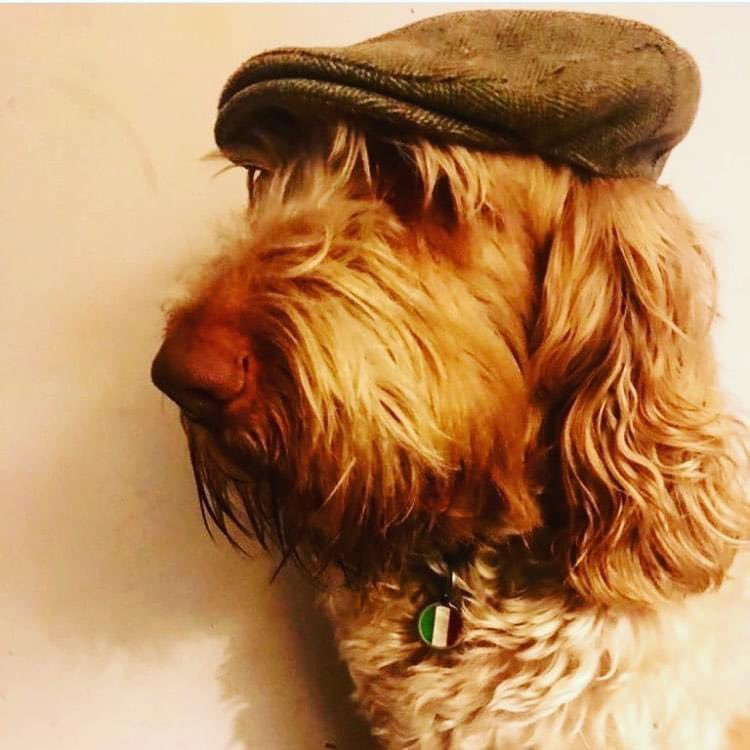 Gary, 2017-2021
I think that the lockdown may have had a positive effect on Mario, and he almost said so himself when I was there. “Covid has been good and bad… We had to step back and think. It has helped us to re-find who we are as a business.” What I saw was the joy he has in making and selling cheese, and it’s certainly paying off. Orders are now coming back to normal, and the business, even having moved to larger premises, is struggling to keep up with demand. In the last couple of months, the food & drink industry has seen the return of trade shows, competitions and awards that were cancelled last year. In September, Yorkshire Pecorino was one of the winning products to be showcased at the Great Taste Awards judges’ dinner. Mario came home from The International Cheese and Dairy Awards in October with five awards, swiftly followed by five more at the World Cheese Awards in Asturias, Spain, the following week. At the Deliciously Yorkshire Taste Awards in November, he bagged not just the Best Cheese award for the Pecorino Fiore but also Supreme Product Champion award, whose judges described it as “a product made with clear skill and care and with impeccable provenance. A true Yorkshire champion to be rightly proud of.”

Mario is philosophical, though. “I don’t mind the awards. They’re good publicity; they make people notice you, but you have to focus on the product – always put the product before the money, the award, everything.” It is a philosophy that is paying dividends.

Paul Fogarty, writing as The Aperitif Guy, maintains a popular food and drinks blog. He is also an accomplished speaker and trainer on food and beverage history and is available as a food & beverage events consultant. You can follow him on Twitter by searching @AperitifGuy, and his blog is at blog.theaperitifguy.co.uk
Also by The Aperitif Guy...
Festive Dinner PartiesGive The Turkey A RestAward-winning Charcuterie From The North Of EnglandCelebrating Michaelmas With A Fine DinnerAutumn Flavours In The Kitchen And In The Drinks Cabinet