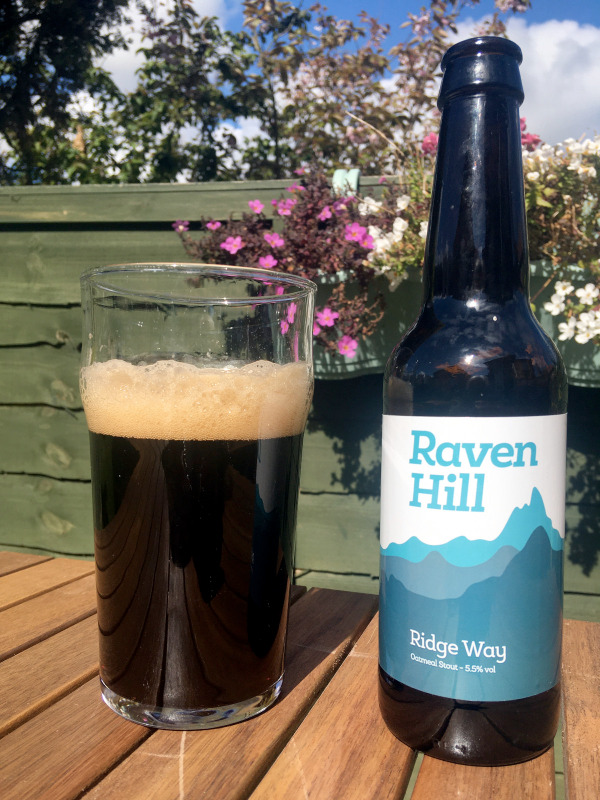 This is the first in a midweek series, Wednesday’s Wallop, showcasing first-rate local beers to get you through the week in style – maybe a slightly different style from the bitters and IPAs our weekend column has so far concentrated on.

We could not have found a more choice way to begin than with Ridge Way, an oatmeal stout (5.5 ABV) brewed by Raven Hill Brewery, at Kilham, near Driffield, by Mark Savile.

The brewery takes its name from the farm where Mark grew up. Founded in 2018, before Covid they were brewing in excess of 750 pints a week of happy, hoppy, lively beer, with a special appeal to those with ‘an outdoor adventure kind of lifestyle,’ he tells me.

Mark studied Chemistry at Leeds University before working in Chelmsford as a business analysis for a malting company. He reckons it might well be these two experiences that combined to direct him toward brewing. After returning from Europe where he had been working for brewing and malting firms, he began home-brewing for friends and family. They quickly developed a taste for his beers and he for brewing more, so to do the job right he signed up with UBREW.

Located in London’s trendy ‘Beer Mile’, UBREW was an 'open brewery', where members could cut their teeth as virtual owners of a brewery, brewing their own beer. This, then, is where he honed his craft and he returned to Yorkshire eager to get started and with all the energy of youth.

Mark, who recently became the proud father of Wilfred with his partner, Gemma, sees the Covid crisis as a challenge to be overcome by innovation and endeavour. ‘We launched a new online shop so people can buy direct from Raven Hill www.ravenhillbrewery.com/shop' he says.

So how has Covid affected him? ‘Though I’m obviously not brewing as much,’ he says, ‘I’m very busy making deliveries and also working on different brewing projects, including plans to produce a very special Czech pilsner.’ I press him for details but it is still at the planning stage and he's keeping it under wraps.


Also by Andrew Liddle...
The Wednesday Wallop: Half Moon Brewery’s Old ForgeBeer Of The Week: Little Valley’s Cherry SaisonA Day With Dame VeraBeer Of The Week: A Rambler In RyedaleMidweek Beer: Nothing Better Than A Cold Bath In Harrogate
Recently he has turned his focus more to cans than bottles, co-operating with Malton’s Brass Castle Brewery to use their canning facilities. He reckons that the cans, attractively designed by Gavin Appleby, are more in tune with his customers’ active lifestyle. ‘They’re lighter for carrying, don’t clink or break,’ he says, ‘and are easier to open.’

He would, of course, know because he is the outdoor-type himself and found inspiration for the name of the splendid Ridge Way when standing on a Lakeland fell surveying the sunlit uplands. His other beers, like Summit, Ravine, Chalkstream and new ones, Chasm, Quest and Trail, suggest similar inspiration.

‘I’m learning all the time,’ he says cheerfully, ‘always looking to understand the chemistry behind a different taste.’ He confesses to using on-line ‘recipe builders’ and to liaising with others in the trade. ‘I do an immense amount of market research,’ he adds, ‘looking into what people are drinking and wanting.’ Three times he uses the word ‘curiosity’ to describe his interest in the minutiae of his craft.

I am curious, too, to know how he has achieved so much in so short a time, managing not only to brew beer but, all on his own, to market it and deliver it all over the East Riding.

'Hard work,’ he says, as I begin to make light work of the pint he has just poured me and left at a polite social distance.

Yes, it’s a grand summery beer, very much worth coming to Kilham to taste at source. It’s a sweet and full-bodied stout, Guinness-dark but much sweeter. It has a deep dark beige head which subsides. The complex aroma is reminiscent of dark chocolate, dark fruits, hops, suggesting a more bitter taste than it is. The palate seems to detect a voluptuous blend of roasted coffee, chocolate, caramel, molasses, malted milk, toasted oats, loves the lingering chocolate-brandy finish and demands more.

A great drink to get you through the week and for any time, with a wide appeal to young and old, male and female.