Traffic Bulletin: Weekend Closures For M6 In Cheshire Postponed By A Week

The first of two weekend closures of the M6 at junction 19 at Knutsford in Cheshire has been postponed for a week due to last week’s cold snap. 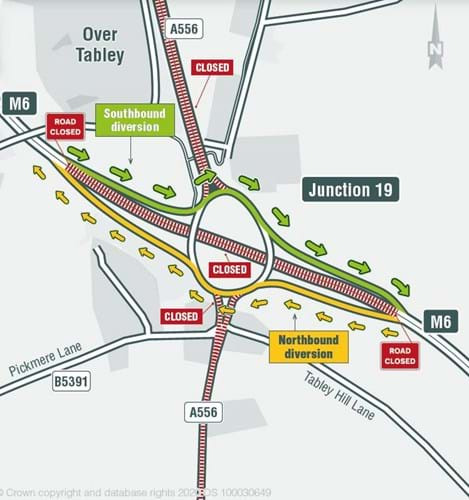 An animation to show you how Highways England plan to install the bridge beams during the closure.
In a significant milestone for its £43 million junction 19 upgrade, Highways England was due to start installing bridge beam across the motorway from Friday (15 January) in the first of two successive weekend motorway closures.

However, last week’s plummeting temperatures – affecting concrete curing - reduced the amount of time available for finishing work on the support columns in the hard shoulder and central reservation, forcing the postponement of the bridge beams installation.

The two Friday night to Monday morning closures will now take place on the weekends beginning Friday 22 January and Friday 29 January with an operation to crane 36 huge, 90 tonne bridge beams into place over the northbound and southbound carriageways.

Highways England is constructing a bridge over the M6 through the existing junction roundabout to improve traffic flow between the motorway and the A556 and reduce congestion around the roundabout itself.

The new bridge is set to open in the summer. More information on the project is available at https://highwaysengland.co.uk/our-work/north-west/m6-junction-19/