And so the daily Coronavirus press conferences have now been summarily cancelled. I’m not surprised: I got bored a couple of seasons back when they got rid of some of my favourite characters. They never did complete the story arcs for Jonathan Van-Tam and Ruth May. Still, I expect there’ll be a spin-off later in the year.

Boris Johnson was there on the final day to have the last spaff, announcing that lockdown was over and that most businesses can attempt to return to something like normality. The decision had of course been guided purely by arbitrary dates. Sorry, I mean by The Science. Unfortunately, the science comprised astrology and homeopathy.

After all, we continue to have more deaths in the UK on a daily basis than the rest of the European Union combined. People are worried about a second wave of the virus as lockdown eases. I’m not. Mainly because we haven’t finished the first wave yet. 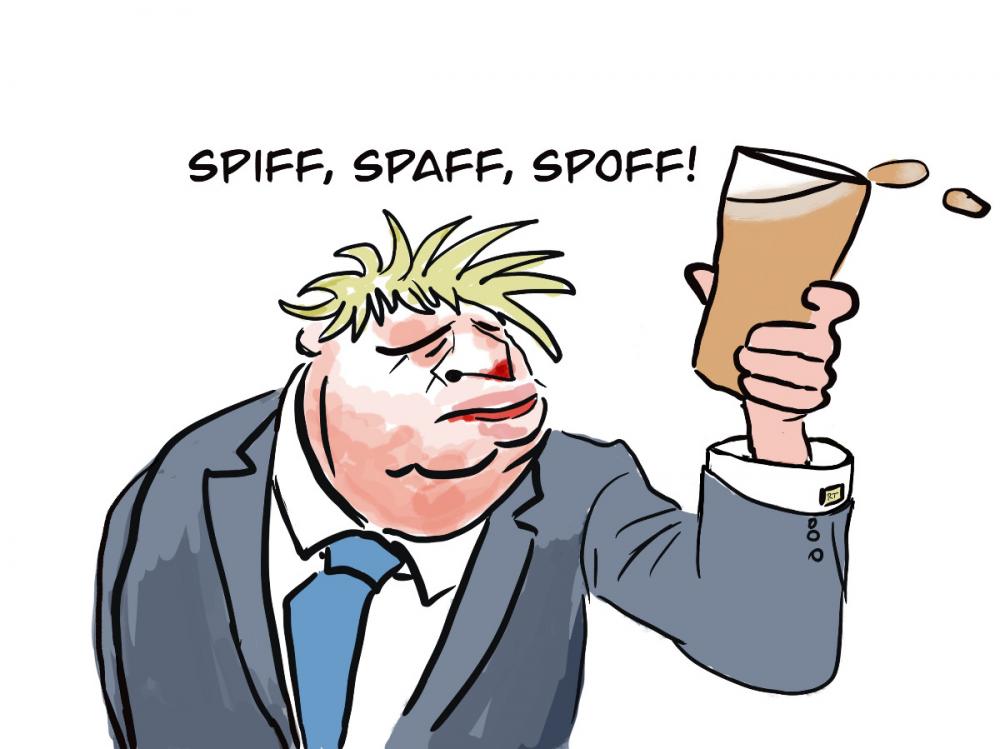 Nevertheless, on July 4th – Independence Day – we will finally regain our freedom! We will be free of the pretence that the government ever had any other strategy besides herd immunity. From that day, we’ll all be able to go to the pubs again. Just remember to take a lesson from David Cameron and try not to leave your children there. That’s assuming that you know how many children you have (or how many you admit to, at least).

“I hope it will be a great day,” said Boris, “but obviously people have got to make sure they don’t overdo it.” Good plan. I’m sure no one will be overdoing it when the pubs open for the first time in four months. “And we can’t have,” he continued, “great, sort of, writhing scenes in the beer gardens.” Is he thinking about the Bullingdon Club again? I hope there won’t be a pig involved.

As the final press conference went on, you could almost see the two scientists socially distancing themselves from the decision to relax the lockdown rules. Asked whether there was a danger the measures could lead to an increase in virus cases, Chris Whitty replied, “If people hear a distorted version of what’s been said that says, “This is all fine, it’s all gone away,” yes, we will get an uptick, for sure.” The press were of course suitably restrained the following morning: “Cheers Boris!” said the Express; “Get The Beers In!” said the Metro; “Hibernation At An End,” said the Times; “Summer’s Back On!” said the Mail. Yes, that’s good, clear messaging. I’m sure it’ll all be fine.

Johnson had earlier addressed the House of Commons about the lockdown easing. “I am acutely conscious,” he began, which was a good start, since it’s not always obvious he’s conscious during Prime Minister’s Questions, “people will ask legitimate questions about why certain activities are allowed and others are not.” The government won’t answer them, obviously, but you can’t have everything.

“The virus has no interest in these debates,” he continued. It’s not the only one.


Also by Roger Winterbottom...
The Lockdown ThreequelReview: Troubled Blood By Robert GalbraithSo Long, And Thanks For All The FishYou Can't Beat A Bit Of BullyI'm A Nonentity - Get Me Out Of Here!
The previous day had seen the Deputy Chief Medical Officer, Jenny Harries, explaining that it was estimated there were now about 1 in 1,700 people infected with the virus. “We can say that the levels are now so low,” she said, “you would have to meet 1,700 people before you came across a case of infection.” That’s great! I can just start counting how many people I meet and, when I get to 1,699, I’ll avoid the next person!

George Osborne had also been talking up the government’s response to the pandemic on Radio 4, positively noting that “the death toll is lower than it would have been in previous centuries”. I expect that’s because we have better leeches now.

One of the reasons the Prime Minister was confident to relax lockdown is because the track and trace system is now up and running. With 25,000 tracing staff now working on the system, Johnson suggested that Sir Keir Starmer was “stunned” by its success, with over 87,000 people being contacted in the past week. So, let me see: each contact tracer, on average, has managed to contact, erm, fewer than four people in a week. That certainly is stunning, though perhaps not in the way Johnson meant. Meanwhile, the “world-beating” app that was supposed to be a key part of the system has now been indefinitely delayed. It did get a limited roll-out on the Isle of Wight but never made it to the rest of the country. I think it must be something to do with what I keep seeing on social media: Wight Lives Matter.

Now that the government no longer has to worry about having to answer to the press on a daily basis, attention is already turning to a Cabinet reshuffle, with reports that key figures who have underperformed in the crisis will be sacked. You did your best, Boris, but I’m afraid Dominic is going to have to let you go, sorry.

In all seriousness though, the Conservative party is renowned for ruthlessly removing leaders who have become a liability, and the rapidly declining opinion poll ratings indicate that Johnson is at risk. My guess is that the party will keep him in place until next year, when the no-deal Brexit has been concluded and the pandemic is truly in retreat, and then he will be gone. For this particular BJ, I don’t think there will be a happy ending.