The Digital Cage – What Price Progress In H. G. Wells’ The Shape Of Things To Come And Heather Child’s everything About You 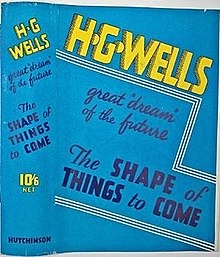 I have something of an antipathy towards new technology. Though I’m no Luddite, I’m certainly a technophobe. I’ve not yet made the transition from paperback to Kindle, for instance; and an Alexa I was once given free of charge, I promptly gave away just as freely. But it seems I’m not the only one to have been troubled by the onset of technological progress.

H. G. Wells’ The Shape of Things to Come (1933) differs from his earlier science-fiction masterpieces in that it is set within a frame narrative, charting a history of events leading to the foundation of a utopian world state. But even from their enlightened twenty second century standpoint, Wells’ subjects harbour an implacable fear of progress: “It was not so much that the writers of the time desired civilisation to retrace its steps, as that they wished that no more steps should be taken”. And so too in the 1936 film adaptation, for which Wells also provided the screenplay, Sir Cedric Hardwicke rails: “What is this progress? … Let this be the last day of the scientific age.”

In this work, Wells addresses the dangers of progress in terms of their wider implications for society. Firstly, following a spurt of postwar growth, clustered multi-storey building projects abound in scenes reminiscent of such overpopulation dystopias as Harry Harrison’s Make Room! Make Room!. Such unfettered developments in construction and infrastructural circles bring about a literal societal collapse in what Wells describes as the “the great London landslip”. Wells then adumbrates the dangers of certain breakthroughs in the arena of war, correctly predicting the invention of chemical weapons – or, as he terms them, “Permanent Death Gas[es]”.

Wells goes on to predict the manufacture of GM crops – a milestone we ourselves would reach in 1994, prompting various ethical debates in relation to food production. He then progresses from plants to animals in his prognostications on the theme of genetic manipulation: “The smaller fry of life … the little beasts and the birds can be varied now”. We would of course cross this boundary ourselves in 1984 with our first successful foray into animal cloning, again proving Wells correct and raising questions upon the morality of such undertakings. He dips a tentative toe into eugenics, but only goes so far with this, unlike his contemporary Aldous Huxley. Wells would go on to dub Huxley’s magnum opus, Brave New World (1932), an “alarmist fantas[y]”, but the notion of an individual’s life chances being determined from birth, through manipulations in the gene pool, with no freedom of choice or opportunity, is at best unsportsmanlike. 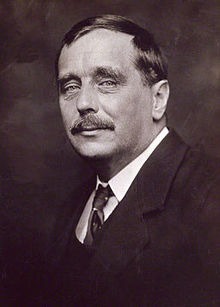 H.G. Wells
A point of common ground, however, is Wells’ and Huxley’s shared fear of a “throw-away society” becoming the norm. As it becomes cheaper and easier for consumers to replace rather than repair, the more we risk becoming a disposable culture. Just as Huxley’s mantra was “Ending is better than mending”, so too the slogan of the Wellsian world state is: “[F]ar more important than getting things is getting rid of things”. Arguably, we’ve reached this particular nadir now. Not all of us recycle as well as we should – mea culpa! Furthermore, documentaries like Blue Planet have perfectly delineated how our wastefulness has transformed even the ocean floor into a dumping ground.

Though progress does eventually lead to a world state, in which mercenary endeavours have been proscribed and all land turned over to public ownership, aspects of Wells’ new utopia can still in many ways be read as dystopian. His “World Council” is also referred to as the “Air Dictatorship”, under which his populace is subjugated; fleets of aeroplanes “treat” insurrectionary gatherings with pacifying gas to maintain order; all religions have been eradicated in favour of a new “World State Ideology”; the new order is patriarchal with no women in positions of influence. In other words, Wells' Utopia is built upon rotten foundations. Plans are even proposed for the state-regulation of language. Though the intention seems noble – a drive for a simple lingua franca between member states – it puts one in mind of 1984’s “newspeak”, whereby language is systematically “cut ... down to the bone”. Arguably, the true purpose of such an initiative is to reduce a populace to functionaries. The fewer words citizens have with which to think, the less liable they will be to rebel or act beyond the confines of their duties. This certainly appears to be an insidious motive of Wells’ new World Council: “The ... government meant to not only rule the planet but human will”. Furthermore the notion of state-regulated language is doubly disconcerting when you realise you could potentially face a legal sanction for using an obsolete term, or for simply saying the wrong thing! Consequently, Wells’ Utopia is paradoxically more totalitarian in nature, being so rigorously upheld by military might. Indeed, the sinister statistics of his regime – some “47,066 political executions … [in] 29 years” – eerily parallel those of the Stalinist purges of the later Thirties. Much like the later communist model in practice, Wells’ notion of Utopia prior to it, though initially achieved through social and technological progress working together in lockstep, is shown to be an unattainable ideal.


Heather Child’s Everything About You (2018) deftly addresses the dangers of our current age as it grows increasingly digitised, including the moral grey areas of social medial and nascent virtual reality. Child’s is a wonderfully visualised world. Whilst still ostensibly recognisable to us, it is a world in which artificial intelligence and VR are very much the norm.

Child’s world is saturated with AI devices. Her protagonist, Freya, wears a pair of “smartspecs”, which do everything for her from paying her bus fare to plotting her route home. Even her toothbrush takes it upon itself to arrange her a dentist’s appointment when its bristles become sufficiently impacted with tartar. Some of these appurtenances may seem over-the-top, but not necessarily so when you realise we’re within a few years of owning some of them! 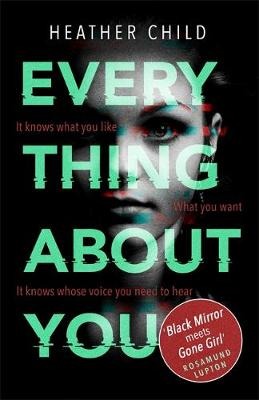 Child then presents some of the darker aspects of her AI conception. Freya’s new “smartface”, for instance, is troublingly intuitive. It masquerades as her friend, mimicking her cadences of speech; it acts as a life coach, sourcing suitable job vacancies; it even alternates movie finales for her, depending on her mood. The danger Child highlights here is that the user’s right to think, decide and act independently has been taken away.

Furthermore, when Child states that the smartface “is one of those technologies that people are starting to find too useful to do without”, she flags the dangers of dependency on AI. Firstly an over-reliance on it, to do all the things we can do just as easily ourselves, may render everyday life indolent. (Personally, I’m all for new technological innovations making our lives easier, but not lazier! Certainly I wouldn’t wish to make a transition from a sentient to a sedentary being). Secondly, when our various devices malfunction, we find ourselves unable to cope on our own terms. When our mobile phone screens fade inexplicably to black, we act as if a life support machine has been unplugged! Freya finds herself in this very situation, whilst at one point travelling alone through the countryside. Denuded of tech and flung back to basics against Mother Nature, she easily loses her way and even fears she might perish!

Child then demonstrates the harmful physical effects of her newly-conceived VR platforms. Following a prolonged period of immersion, Freya remarks how “her skull [has] turn[ed] to lead” – an experience some of us today may relate to, following a heavy gaming session, along with other such complaints as headaches, a lack of vitamin D and problems with posture.

But there are significant psychological detriments too, as Child elaborates. She perfectly highlights the irony that social media platforms effectively render their users more antisocial. Freya’s flatmate and former partner, Julian, for example, seldom leaves his room, spending most of his time immersed in VR, and emerging only at odd intervals to stagger atavistically to the kitchen. On a larger scale, Freya describes communal areas filled with “dark huddles of headphones and screens”, with users “laughing with invisible people”. Furthermore, said users are “astonished to be disturbed” should you ever attempt to draw them out of their respective cyberspaces. Here Child spells out that social media interaction is in fact a misnomer, a contradiction in terms and no substitute for interpersonal discourse in the flesh. How often do we see families and groups of friends together, each person tapping away privately at an iPad, whilst largely ignoring those organic entities seated next to them?

As you read Everything About You, you may feel as if the machines are taking over. Even the narrative itself is written in the third person present tense, so it reads like a computer programme constantly on the update! 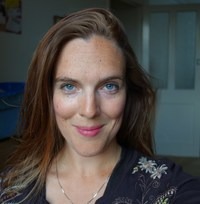 Heather Child
One of the major issues Child highlights, as we continue to venture into new tech areas, is misuse of personal data. In her fictional world, there is no such thing as privacy. People’s whereabouts are continually tracked: “Everything is transparent, everyone a floating pin on a map”, and this is another feature which is beginning to resonate in everyday life. I can’t even go to the supermarket these days without Google asking me afterwards how the experience was! We also learn that Freya’s device has not merely honed an artificial personality through its interactions with her, it has in fact assumed the personality of her deceased sister, Ruby, having studied what remains of her digital footprint online. This immediately sets ethical alarm bells ringing, for this is essentially identity theft. But this is just one of the potential pitfalls Child believes we can come to expect as we continue to tread the terra incognita of the digital age. Though we continue to make great strides in terms of science and technology, it seems we will be continually playing catch-up on a social level – a truism already propounded by Wells: “It was easy to supplant the coach and horses … But men cannot set up new social institutions ... in that fashion”. Though the wheels of progress may continue to turn, the attitudes and values of men may not necessarily do so in tandem. And this is self-evident today, as the Facebook-Cambridge Analytica scandal of 2018 has already made plain. We are still navigating uncharted waters in terms of social media and its platforms. We still as yet don’t know how to regulate it. The legislation is still being drafted.

As Moore’s Law dictates, technology is continually moving apace – not at a steady rate but with quickening rapidity, like an ever dividing bacterium. At this present point in time, I’m struggling to keep up. But needless to say, I won’t be allowing Alexa to run the show. I shall continue to switch on my own lights!


The Shape of Things to Come was first published by Hutchinson

Everything About You is published by Little, Brown