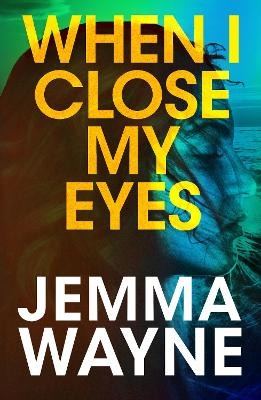 The lack of control experienced by the somnambulist is frightening and this novel explores the fear and sense of uncertainty it may arouse in sufferers. Physical torture is bad, mental torment is so much worse.

Lilith shares a name with Adam’s first wife - not Eve, the one we all know about, but the first one, the one made equal who did not want to be subservient to a man; the one who, punished by God and robbed of motherhood, became the ‘Night Monster’, killing new born babies. When she discovers the origins of her name, our principal character feels even more terrified about the horrors of which she could be capable.

Lilith is a rich and highly successful screenwriter in Hollywood, with demons in her past which she hopes have been expunged. In reality, she has run away from them, believing she could keep safe those she loved by not being near them.

The clues are there but the twist, as in all good psychological dramas, is not obvious, although there is something deeply unsettling about Cassius. He carries a chip on his shoulder because Lilith has realised the dream
The narrative weaves between different time frames so that we see Lil as she is now, successful and in control of her life, yet gain some understanding of the psychological difficulties with which she has had to contend. She used to sleepwalk and with no memory of what she did on her nightly perambulations, but knowing she once took her young brother from his bed, she developed the morbid fear that she could harm him in some way. Dylan was safe that time but fearful, violent visions of what might have been pervaded Lil’s every thought thereafter.

We are also introduced to her friend, Cassius, son of wealthy parents, who feels ignored and unloved. The two met when they were young and he envied Lil her happy family life. They developed a deeply significant bond but it was a relationship which proved to be as unhealthy as it was inexplicable. They were friends and occasional lovers, not bound to each other but inextricably linked.

As teenagers, they dreamed of moving to America together, her as the writer of films in which he would star. Cassius talked of them as being a powerful couple – admired and respected, a force to be reckoned with, but when they took different paths, different universities, it seemed the dream was not to be.

In the present day, Lilith is living in America, having deliberately left behind everyone she loves, including Cassius. She is with Patrick now, and the sleepwalking has not troubled her for years, although she still does everything she can to keep her lover safe, still fearing what she may yet be capable of. The sudden return of Cassius into her comfortable life upsets the continuum. He tells Lilith his wife has died of cancer and having paid for expensive treatment and having been cut off financially by his parents, he has no money; he is, quite simply, asking for help and suggesting she owes him. Lilith cannot turn him away and thus begins a deeply disturbing drama. Lilith develops a deep attachment to Cassius’ three-year-old daughter, Jessie, which causes the maternal longings she has buried for so long to resurface.

The narrative is slow and insidious. The clues are there but the twist, as in all good psychological dramas, is not obvious, although there is something deeply unsettling about Cassius. He carries a chip on his shoulder because Lilith has realised the dream - their dream - without him, but the reader is only given mere glimpses of his darker, volatile side. Outwardly sociable, naturally gregarious, he charms her friends and for a while, even Patrick can tolerate the unusual situation after Cassius and Jessie move in – just temporarily - with Lilith. The sleepwalking returns and Cassius offers to protect her. It is only when the facts are laid bare and the truth is known that the full extent of his machinations are revealed.

It is sometimes hard to believe that Lilith is supposed to be a highly respected and hugely talented screenwriter, used to leading meetings, making decisions and ‘running the show’, when she is tormented and weakened by her demons; how can she be so irrational and not see what is staring her in the face? How can she assume a mask so successfully, while simultaneously falling apart? But then, is that not sometimes the impact of delusion and psychological trauma? This novel certainly makes you wonder what unfolds in other people’s minds, let alone their lives; it also explores friendship - both real and imagined - and the sense of what is owed. The reader’s opinion of Patrick grows, just as their opinion of Cassius begins to wane while other characters such as Madge, Dylan and Jessie provide cameos which are real and enduring. The ending is not what you might expect but justifies the feelings which have developed along the journey.

When I Close My Eyes is published by Legend Press Ltd
Also by Artis-Ann ...
Perhaps, Perhaps, Perhaps: The Christie Affair By Nina De GramontKeep Digging: The Night She Disappeared by Lisa JewellScarred, Possibly Scared: Prague Spring By Simon MawerSaying One Thing, Thinking Another: The Undiscovered Deaths Of Grace McGill By C. S. RobertsonPainting Over The Cracks: Trio By William Boyd