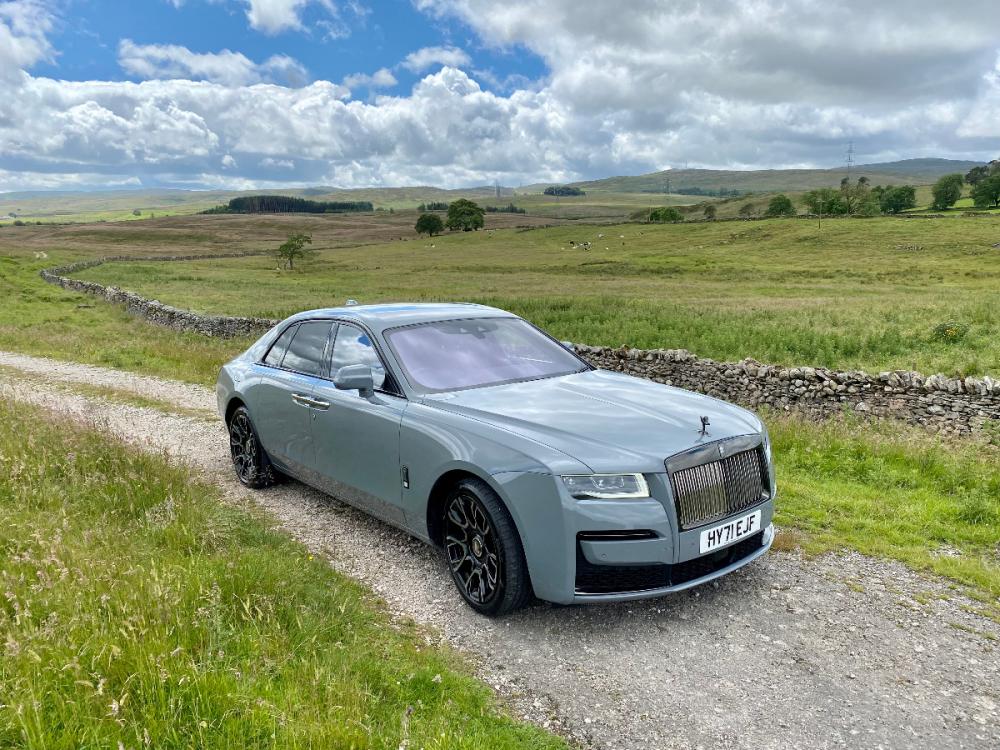 Time spent behind the wheel of a Roll-Royce is always a delight and I have been fortunate to have experienced the full range of cars. Always an occasion, the memories of some great drives never fade.

A missive from the Press Office asking if I would care to sample the latest Ghost Black Badge over a summer weekend was eagerly accepted. A road trip would be planned, something that would do such a special vehicle justice.

The Ghost was updated a few years back now and looking through my notes, the only carry over parts were the Spirit of Ecstasy and the bespoke door umbrellas. A shared platform with the Cullinan means that the car’s not inconsiderable power is now sent to all four wheels. 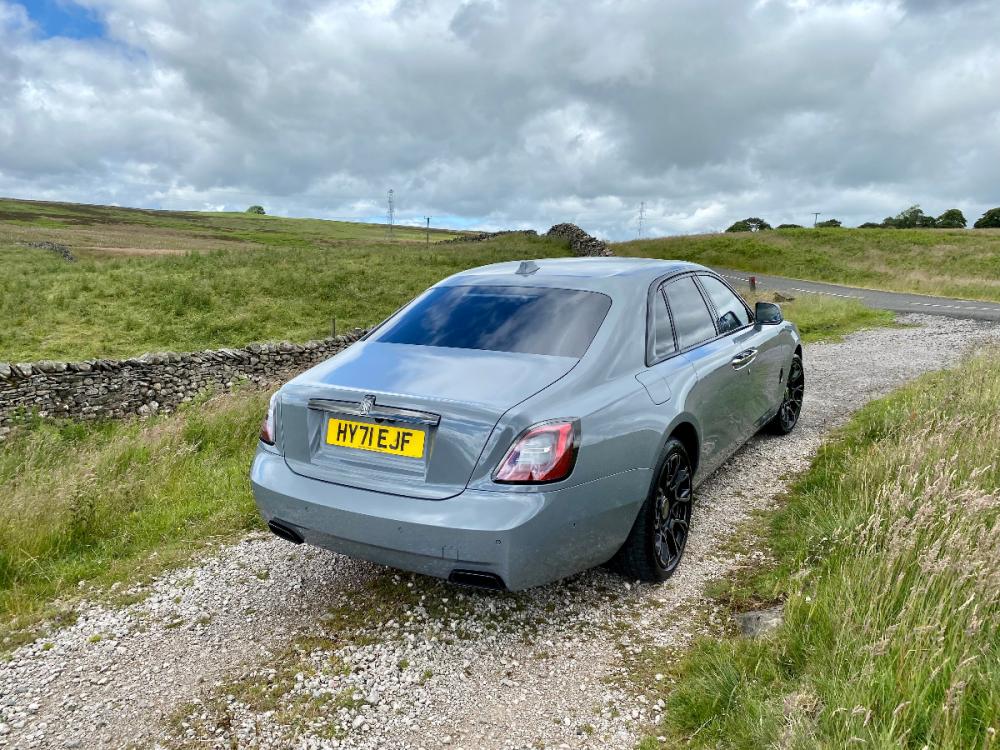 A Black Badge version of all Rolls-Royce’s cars now exist, and there is no doubt that a younger, more discerning buyer is clearly the target. They say the bespoke treatment is ‘darker in aesthetic, more urgent in personality and dramatic in material treatment.’ Drivetrain and chassis are re-engineered too for more urgent performance.

So, under the Black Badge Ghost’s long bonnet sits the familiar 6.75-litre V12 twin-turbo engine, with power now 600PS, an increase of 29PS. There’s more torque too, a full 900Nm.

Performance figures are really quite startling, the Ghost now capable of sprinting from 0-60mph in just 4.5 seconds and in real world driving it feels every bit as quick. 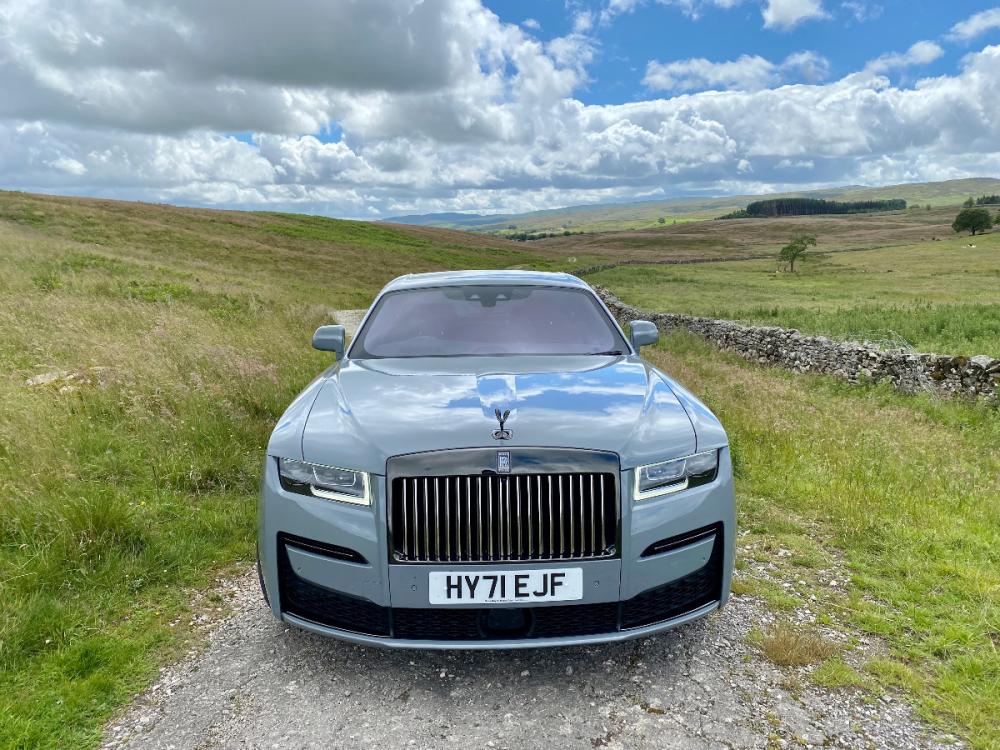 Overtaking manoeuvres can be undertaken at the merest twitch of the right foot, just enough for the eight-speed ZF gearbox to drop a cog or two. Should time really be of the essence, then the ‘low’ button on the gear lever should be given a quick prod. Doing so ensures the Rolls sets off in first gear and kicks down more aggressively. You may also notice a louder exhaust note.

As is the Rolls-Royce way there is no rev counter, just an ‘available power’ gauge and believe me there is always a surfeit. The V12 engine is cultured in tone and is all but inaudible unless your foot is well and truly mashed deep into the lamb’s wool carpet.

The Ghost Black Badge aims to be more of a driver’s car and to some extent it succeeds. The adaptive dampers which form part of the sophisticated suspension system are still more geared towards ride comfort than outright handling. A system of cameras scans the road ahead and sets up the suspension in advance to cope with what is to come. 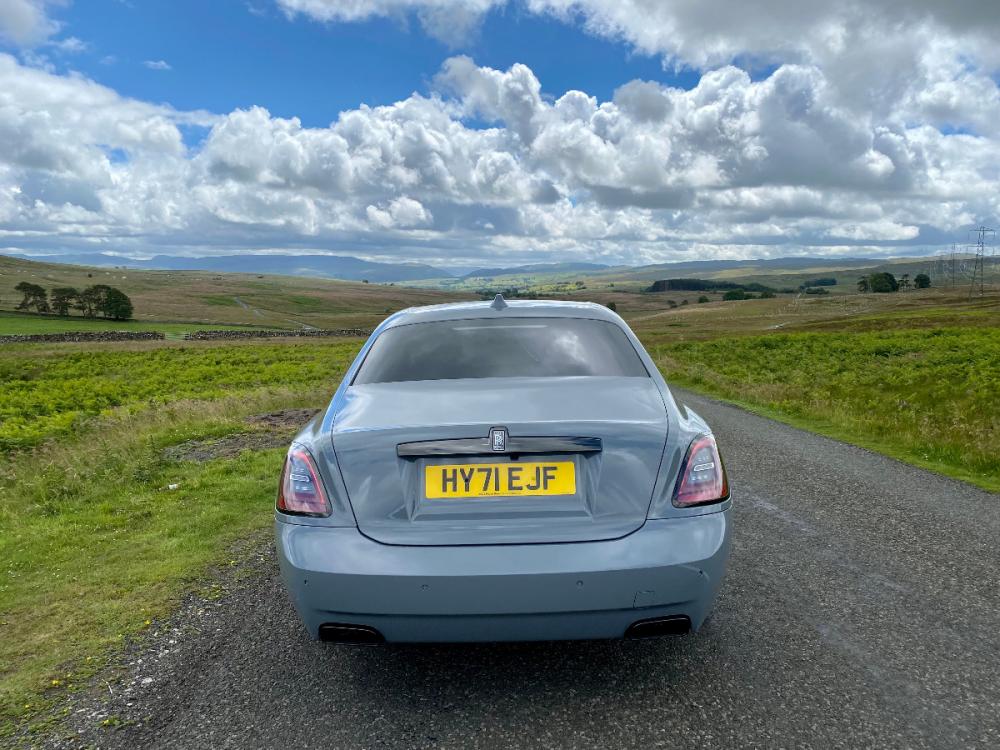 The result is a car that rides with the utmost grace, smoothing out all but the very worst sections of road. A deep pothole can create a rather unseemly thud, the result of low profile tyres no doubt. For the most part you will not find a better riding car.

My weekend adventures began with a road trip to the beautiful Northumberland coast, via the M6 to Carlisle, before heading north-east on some deserted, yet challenging A and B roads. At motorway cruising speeds the sound of silence is quite eerie, with wind and road noise almost completely banished. 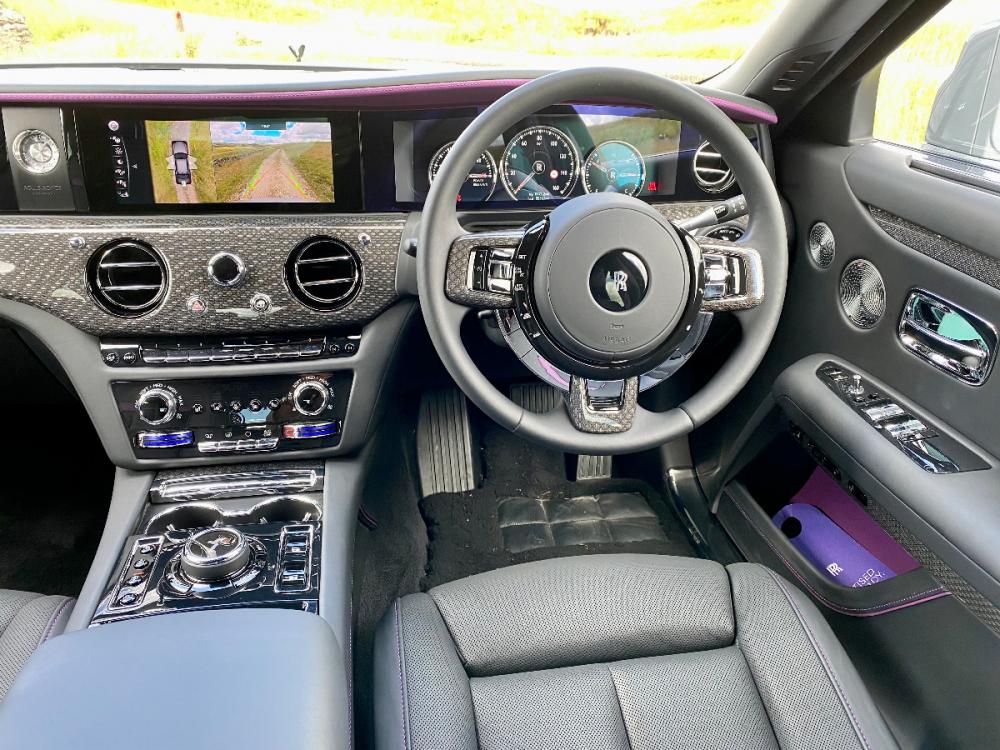 Once on the twisty stuff, let’s just say that the Ghost Black Badge can be hustled along at a fair old lick. There is a tad too much body roll, the car being happier driven in a slightly more relaxed manner. Once you get into its rhythm, you can cover ground with alacrity, though care needs to be taken on some of the narrower UK roads, as the Ghost is over two metres wide. There were a few breathe-in moments!

The steering is light, which makes low speed manoeuvring a doddle, but at speed it is somewhat devoid of feel, which is a shame.

Day two saw a mad dash for the Scottish Borders and once again the car’s strengths shone through. Hour after hour of challenging driving was enjoyed by the driver and passenger, the Rolls making light work of everything thrown at it. And let us not forget the attention the car attracted on my travels, something that does take a little getting used to. 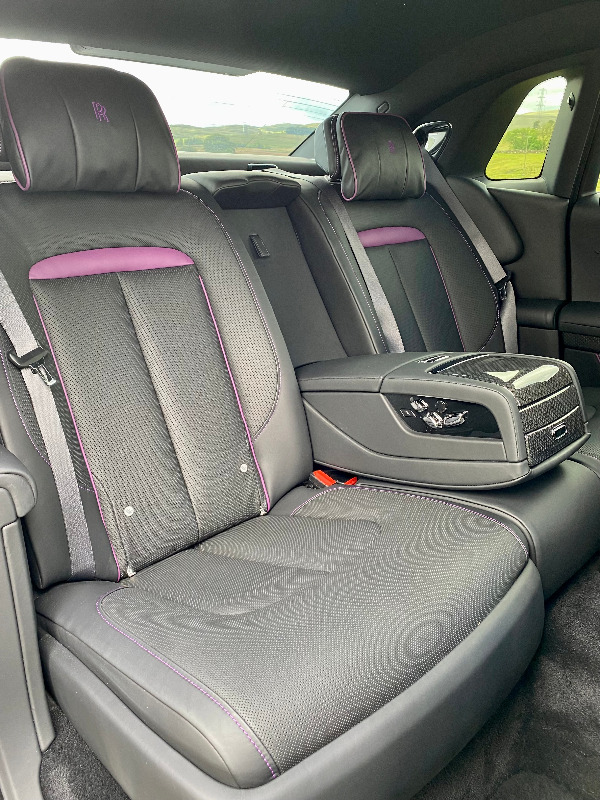 I think I can say with some certainty that Rolls-Royce make the best car interiors. The very finest of materials are used throughout and the possibilities to customise endless. The colour of the leather and the type of wood used are all to be decided by the lucky owner and that’s before tackling the options list. Get carried away and you can easily add another £100,000 to the asking price. Bespoke at its best!

I am told that half of all Ghost buyers expect to be driven and the rear compartment is really rather special. The seats are electrically adjustable and can be had with a massage function, ideal after a hard day in the boardroom. Heating and cooling controls are fitted and if that is not enough, the champagne can be chilled in the fitted cool box.

Twin screens are fitted with controls in the central armrest. Watch a little TV, surf the internet, or listen to a little light music. Picnic tables are also fitted. 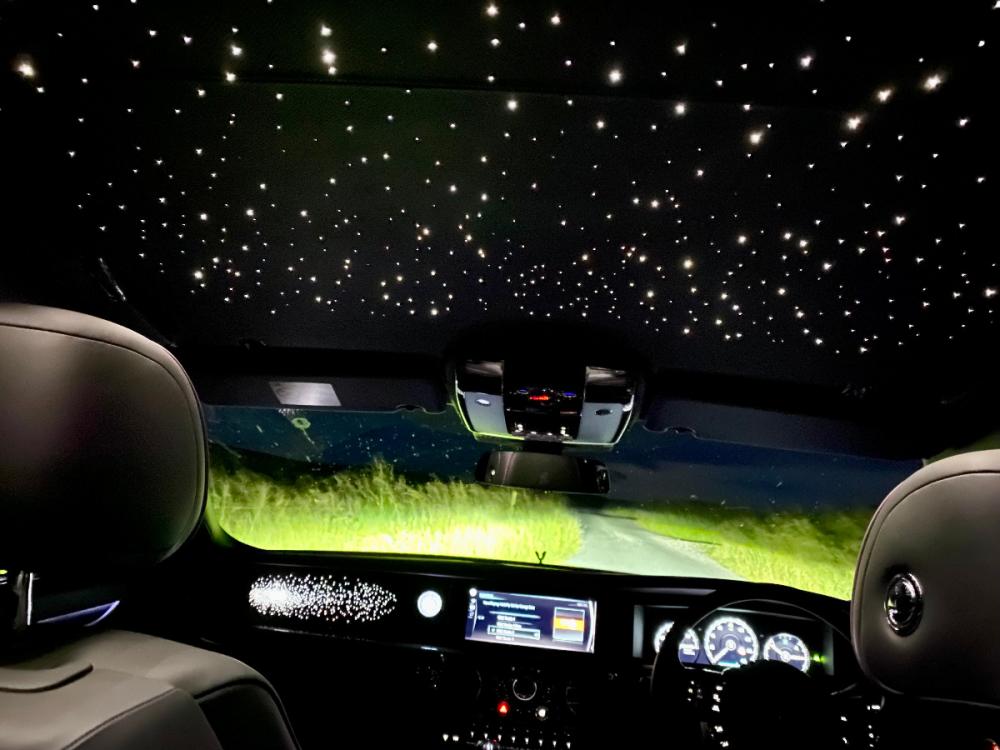 With no one to drive me around, I had to make do with the driver’s seat, itself a perch of great comfort and infinitely adjustable. The view out is imperious, the long bonnet stretching out ahead.

Operating the Ghost is simplicity itself. The dashboard has been decluttered with fewer buttons than before, so less to overtax and complicate the driving experience.

The Ghost Black Badge has no discernible rivals. The Bentley Flying Spur comes closest and is perhaps a better driver’s car, its adjustable suspension allowing for a more sporting drive when in the mood. 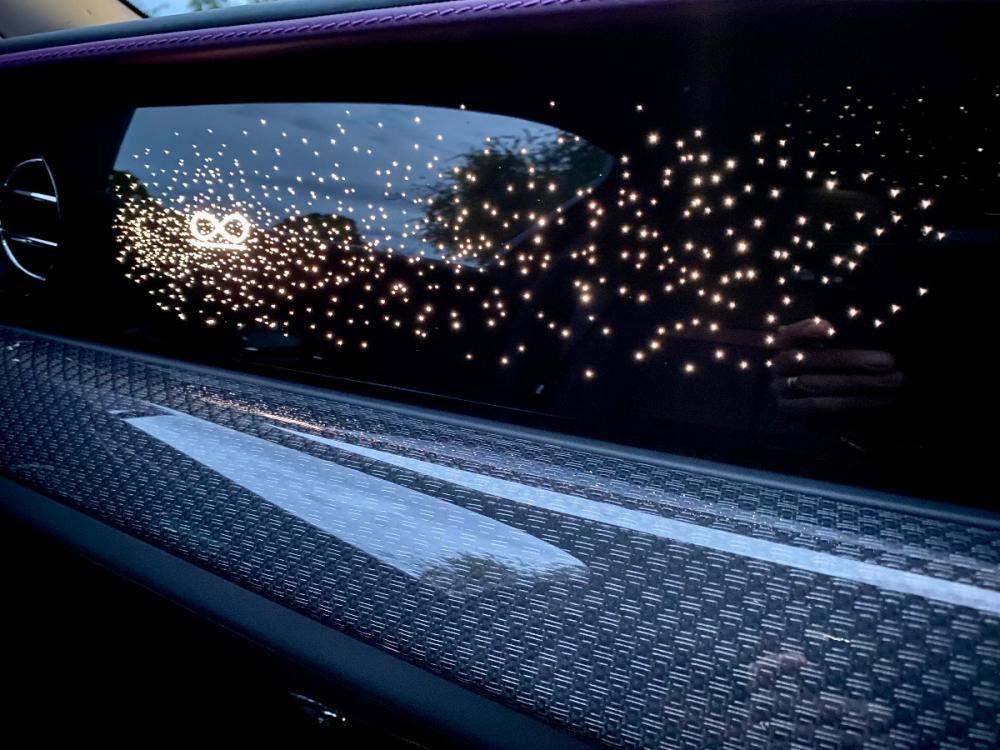 However, when it comes to that feeling of ultimate luxury, the Ghost is a notch above, and so it should be given the price differential.

Rolls-Royce tells me that the average owner (is there such a thing?) will own eight to twelve cars, the Ghost most likely pressed into service when an evening out at a fine restaurant or party is the order of the day. I would drive it every day.

So, for those with the very deepest of pockets, a Ghost Black Badge will sit nicely alongside a collection of supercars and classics. And had I been the lucky UK winner of last night’s £195m EuroMillions jackpot, I would happily have spent some of my winnings at my nearest Rolls-Royce dealership, well just for starters anyway. 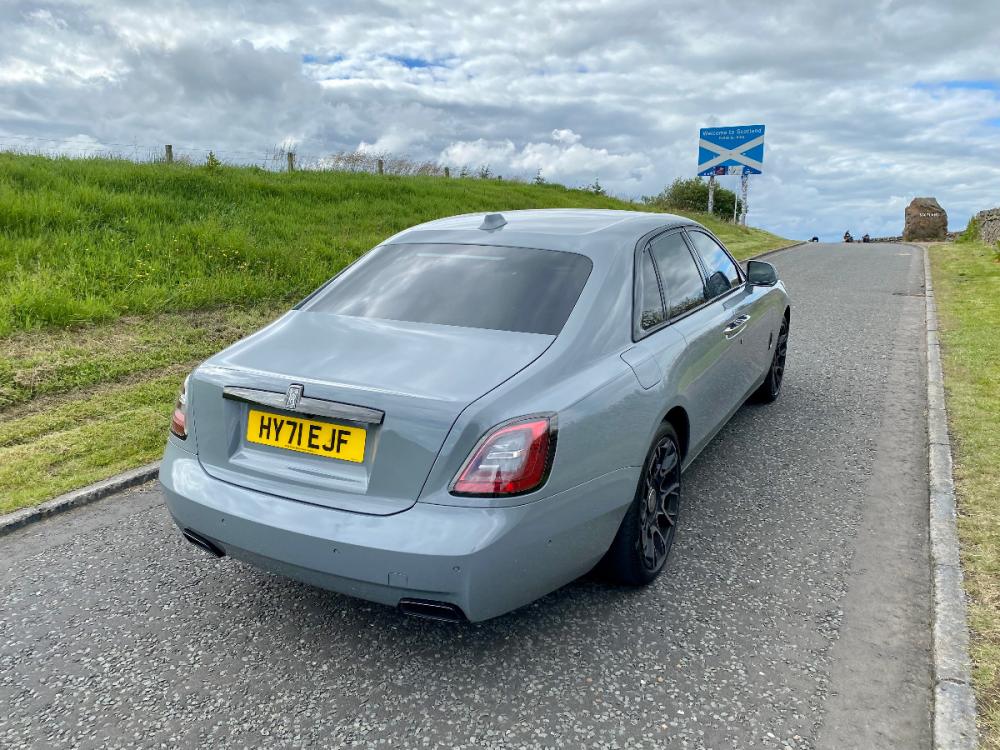 My last day behind the wheel began with a trip to Rolls-Royce Manchester, where the keys to the Ghost were reluctantly prised from my hands. However, before returning to the real world I was chauffeured to dinner that evening. Arriving in style is something I could get used to.