Revenge Is A Dish Best Served Cold: The Racketeer By John Grisham 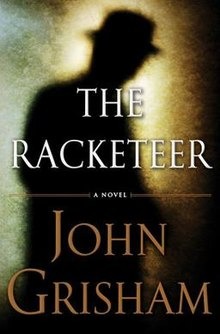 Well, I have warned you before that I like Grisham and here we go again. The Racketeer is definitely not a dry and dusty courtroom drama but a feel-good, justice-is-served type novel. Although it begins with a court case, it is more about revenge. Grisham’s criticisms of ‘the establishment’ are clear, although this is not simply a book about the miscarriage of justice. The actions of the hero are excused because he has already been so badly treated by the authorities.

It’s a good story - Grisham’s imagination let loose rather than a book mired in excessive research. Although he uses his extensive knowledge of the law, Grisham himself pointed out that this is a book he has made up: almost nothing in The Racketeer is based on fact; accuracy was not the crucial factor although he puts his legal knowledge to good use as ever.

Malcolm Bannister, a hard-working, African-American lawyer and is serving time for a crime he did not knowingly commit; naïve - yes, deserving of ten years in prison - no. He was set up by an FBI who did not care whether everyone who went to prison was actually guilty. Now disbarred, divorced and separated from his only child, he bears a grudge!

When the opportunity presents itself, he has both the time and inclination to come up with an ingenious plan for revenge. A federal Judge has been murdered and the authorities are getting nowhere with their investigations. Bannister knows the identity of the killer. He can use this information to his advantage, invoking Rule 35, to ensure his release and subsequent safety in witness protection, with a new identity.

While the reader is left in some doubt at times as to what Bannister is actually doing, there are hints along the way which point to the final twist: ‘he was…the best friend…I’ve made in prison’. The action speeds up towards the end as the characters jet from one country to another and back again, as all matters come to fruition. The obligatory denouement fills in any final gaps which may still exist for the reader.


Also by Artis-Ann ...
Review: Expectation by Anna HopeReview: Death In The Cotswolds By Rebecca TopeIntricate Layers: Eight Detectives By Alex PavesiOn The Road Again: Breathing Lessons By Anne TylerReview: The Hidden Hours By Sara Foster
It is different, and I know critics were divided when it was first published in 2012, probably because it is untypical Grisham, but it gripped me. The dialogue is realistic, the descriptions vivid and the plot moves along in twists and turns, keeping the reader on edge.

Interestingly, this is Grisham’s only novel where the main protagonist is not white. Responding to pleas from fans, Grisham created Bannister and said, ‘It’s no big deal, it’s not about race’ – although, as the New York Times pointed out, he makes ‘shrewd use’ of race later in the book.

With his characteristic dry humour, Grisham demonstrates that he not only knows the law but also the media; the arrest and indictment of a man for the murder of a Federal Judge could only be upstaged by ‘mass murder or celebrity break up’. And there are many more subtle jests throughout. He also makes clear that life in prison is not the ‘cushy number’ many people think. As ever, he is to be praised for his knowledge of the legal and penal system in America, but also, this time, for his persuasive storytelling.

The Racketeer is published by Doubleday