Returning To Didcot: A Commonplace By Jonathan Davidson 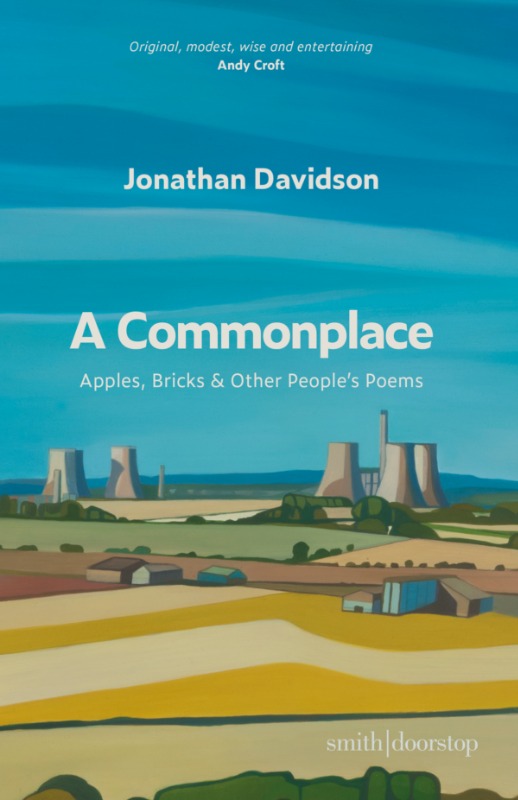 Jonathan Davidson knows when to stop talking. And if we are to measure beauty solely by the standard of brevity we are on to a winner with his new book, at a consumptive 106 pages. Davidson stops talking when he doesn’t perceive a need to continue, and instead fills the spaces where superfluity might otherwise rein, with synoptic treasures. And then he moves on.

With little time for the kind of complexity that banjaxes reflection, and causes some critics to retreat into half-considered speculation, this poet and writer adds intellectual accretion by osmosis: his postscript gazetteer and gorgeously witty footnotes add infinitely to the warmth and generosity with which he envelops the poems and poets he favours. He knows what he likes and he’s going to tell you about it in a style that is ...I was going to say, ‘accessible’, but in a tiered evaluative universe the word carries an unfortunate pejorative connotation, so I’ll say ‘entertaining’.

Lightness of touch need not indicate a lack of gravity: Davidson’s examinations of the provenance and contexts of a selection of poems, including many of his own, are beautifully realised in commentaries that never fail to divert, or instruct. Conceived without a rigid structure – a rendition, in a long line of renditions, of a Renaissance ‘Commonplace’ book – this short, pithy take on verses that are meaningful to him, gives Davidson latitude for a conversational, sometimes conspiratorial, style which is pretty much unique, even in informal critical circles. Sitting opposite him at a table of the imagination, we are privileged eavesdroppers to Davidson’s genial anecdotal largesse, afforded a tour of the library of his capacious wisdom. Where others fill footnote yardage with echoing caves of reference and further reading, this tongue-firmly-in-cheek observer suggests that we might want to undertake a lengthy tour of the poetic hinterlands featured in A Commonplace:

‘…It makes quite a journey: you’ll need a flask and some sandwiches.’

Self-effacement is one of the keys to Jonathan Davidson’s sincerity. He harbours no illusion about his own skills – which are voluminous – preferring to remind the reader at strategic intervals that he might, occasionally, be a useful guide. Finding the perfect vehicle for journeying through a poetic landscape, this impressionistic human ‘gazetteer’ is as curiously old-fashioned and effortlessly digestible as a ham and cucumber sandwich on white sliced with the crust off.

His own origin, in Didcot, Oxfordshire, is re-envisioned through elegies and love-songs for family members, and in the rather beautiful cover picture, which obliges the reader to reconsider the notorious ugliness of power stations. ‘The Industrial Henge’, by Anna Dillon, does for Didcot Power Station what Derek Jarman did for Dungeness, a multi-strata’d paean to the unexpected, like discovering a hair out of place on the head of a member of Kraftwerk, or hearing the beating heart of a poet in the throb of a nuclear reactor. 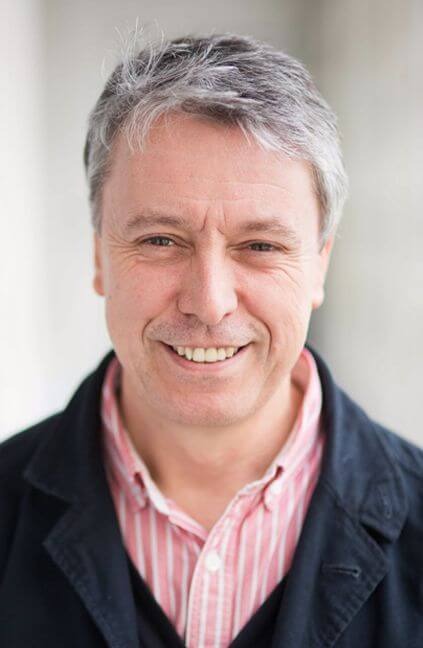 Jonathan Davidson
And what an anthology! The profoundly moving, and in some ways, very funny poems to his mother are an expression of love as the ‘Clouding Over’ of dementia occludes memory, very much as it does in Tony Harrison’s heartbreaking poem of blizzards and Alzheimer’s, ‘The Mother of the Muses’. The simplicity of the narrator’s tone in the nicely-judged ‘Nineteen Fifty-Six’ is the best and only means of extruding, again like Harrison, emotion into a cross-purposed conversation between mother and son, to yield the most poignant effect. That the mother figure mistakes a picture of Versailles for a B&B visited a lifetime earlier is both symptomatic of her condition, and sardonically affecting:

Davidson’s magpie-like flit from subject to subject adds value, rather than otherwise, to his peripatetic commentary, and it is somehow no surprise to find Roz Goddard’s wonderful ‘Winter, Lye Waste’ following his own celebration of the odd, kleptomanic tendencies of ‘dads’, and sitting cheek-by-jowl with a poem about quadratic equations which is not really about quadratic equations. Goddard’s skilled clotting of natural metaphors extemporises the suggestiveness of a chilled landscape as efficiently as dementia’s iron cloaking of the brain:

‘Snow comes in thick as a flock of swans
in silence so deep we felt a prayer.
For weeks the dark music of ground
giving up nickel and iron was white breath.’

Family, people, are important to Jonathan Davidson, and if there is any kind of overarching agenda here, it is one of remembrance. Kit Wright’s beautifully modulated elegy ‘Sonnet for Dick’ is mirrored by the author’s own affecting homage to a friend, before rounding on Jackie Kay’s heartrendingly simple ‘Darling’, to which Davidson gives an equally simple, and typical, response: ‘Jackie’s poem holds grief in its arms and sings it to sleep’. Who needs F.R. Leavis on close-reading, Terry Eagleton on context, or Jacques Derrida on deconstruction when you can inscribe the aching beauty of a poem with the sincerity of a consoling metaphor?

Which seems to be the point, here. The ‘appropriate process’ of ‘A Quadratic Equation’ is actually a carefully planned conjunction, a meeting place for emotional speculation, the ‘recto’ and ‘verso’ of family dynamics of love and anxiety. Davidson’s poetic algebra is the apex beneath which a dialectic of affection and care naturally ebbs. As it does for Bertolt Brecht and Margarete Steffin, whose ‘containment’ in the lyrical prism of a chess game – the lovers did apparently meet for chess in 1940 – is a prelude to wider considerations of loss and power, authoritarianism and death. A metonym for a world in flames, the quietude of Marlebäck will lead, eventually, to Steffin’s quietus, and later the destruction of the Wehrmacht, in Russia. But first, the lighting of Brecht’s polemical fuse is the prelude to an explosion of febrile, unscientific love:

‘while she is here, he wants her so much
to turn the board and all its pieces
into hail and thunder, and to rest
his heavy head against her neck.’ (‘Brecht, B. v Steffin, M., Marlebäck, 1940’)


Also by Steve Whitaker...
Poem Of The Week: 'Paddy Dies' By Stewart Parker (1941-1988)The Architecture Of Sky: Two Tongues - Claudine ToutoungiPoem Of The Week: 'A Parable Of Sorts' By Malika BookerState Of The Union: Rachel To The Rescue By Elinor LipmanPoem Of The Week: 'And Yet' By Jonathan Humble
The interconnection of poem and poem, the threading of each fluid section with prelude and postlude commentary lends a species of rhythm to Jonathan Davidson’ impressionism. This much-travelled observer is at his very best when traversing borders both seen and imagined. His range is breathtaking but cohesive: from the Nicaraguan documenter of terrible internecine upheaval, Ernesto Cardenal, to Catherine Byron’s exquisite rendering of ghosts amongst the interstices in ‘Night Flight to Belfast’, the past and the present are indivisible. The latter, especially, nails a state of being present whilst not being present, as the conditions of totality and curfew unsettle and inform a poetics of retrospective siege, where ‘I was trapped in the wrong house / the wrong dream / and soldiers kept on banging / at the wrong door’.

A powerful affiliation for the spaces between words yields, in Davidson’s work, a sensitivity to demographic and cultural tectonics. Uncommonly aware of the cataclysmic historical suffering of the Russian people, several poems here pay indirect respects to those whose voices would not be silenced in the totalitarian tide. Words…

‘of art sewn into coats and backpacks,
writers editing themselves into the city.’ (‘Kyiv Writers’)

Anna Akhmatova was one example, committing words to inviolate memory where the written text might otherwise convict. Davidson’s tone is one almost of resignation as he is overwhelmed by the onrush of history – ‘The roar of trains / Approaching is the turbulence of centuries’ (‘Metro’); there is, in fact, no light between the approach and the metaphorical uproar.

Returning to the earth in his final pages - though it is characteristic of an instinct for the inveigling power of suggestion that he should announce the presence of ‘nature poems that aren’t about nature’ – Davidson steps out of the persuasively blood-soaked annals of the English Civil War (‘We Set Our Guns’) and into the wooded gorges of a present England. He observes boundaries neither temporal nor natural; his liking for trees is corollary to a sense of continuity, not born of a proclivity for ‘salvation’. His preparedness to give way on the platform, to subordinate his own poems to those he admires unequivocally, embodies a generosity of spirit which is sometimes lacking in our landscape of introspection.

It is entirely typical of him to describe, in a footnote, the brevity of one of his own fine poems (‘Quiet the afternoon after rain’) as a ‘good’ thing, as though two quatrains was somehow merciful. More typical, too, of Jonathan Davidson to yield the floor to Ann Atkinson in a very beautiful poem about being in and of nature as opposed to an observer en passant:

‘The music of the gorge is white water,
its constant industry of flow, the brook
full of itself and urgent for the river,
shifting wood, moving rock, carving stone.' (‘Padley Woods: June 2007’)

A Commonplace: Apples, Bricks & Other People’s Poems is published by smith|doorstop.