A fortnight after this year’s rain affected Monaco Grand Prix the Formula 1 season resumed in Azerbaijan this weekend and at the end of an unpredictable race this afternoon around the Baku street circuit it was Max Verstappen who led home his Red Bull team-mate Sergio Pérez, whilst the Ferraris of both Charles Leclerc and Carlos Sainz retired. 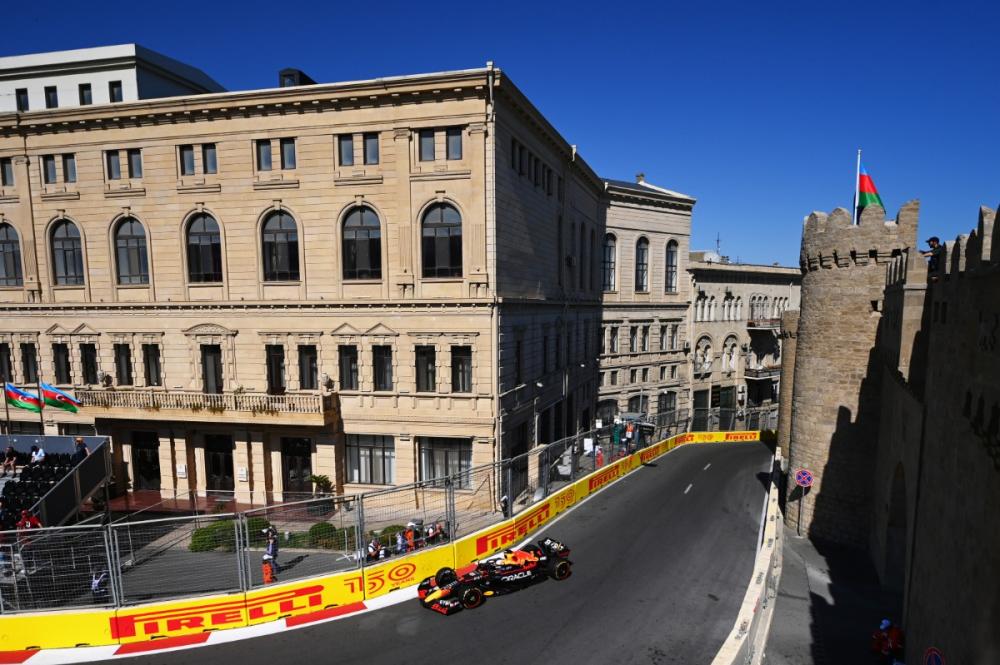 Max Verstappen capitalised on Ferrari’s woes and claimed a dominant victory in Azerbaijan
There had been an element of controversy after the conclusion of the previous Grand Prix when Ferrari had submitted official protests about both Red Bull drivers having allegedly committed pit exit infringements during the race. Representatives of both teams were summoned by the FIA stewards and at the end of the meeting Ferrari’s protests were dismissed, with the original Grand Prix result still standing. This meant Pérez remained as the winner for Red Bull, with Verstappen third, and Ferrari’s Sainz and Leclerc second and fourth. One of F1’s two new race directors Niels Wittich subsequently confirmed prior to the Azerbaijani weekend that drivers are allowed to drive over the pit lane exit line, but must not place a whole wheel beyond it.

As for the Monaco victor “Checo” Pérez, the Mexican received a further boost just a couple of days later when Red Bull announced a two year extension to his contract, keeping him with the Milton Keynes based team until the end of the 2024 season. His good news was very much bad news for AlphaTauri’s Pierre Gasly, whose strong form of late had given him hope of a possible promotion back to the Red Bull senior team, but the French driver accepted the decision as highly logical given Pérez’s improved performances and the significant financial input he brings to the team. Gasly has one further year left on his AlphaTauri contract and is keeping all options open for 2024, if not before, including any possible openings at McLaren alongside Lando Norris or Mercedes alongside George Russell if Sir Lewis Hamilton has retired from the sport by then.

Driving a Formula 1 car is very much a combination of both physical and mental abilities and self-confidence is crucial, something which Pérez has an abundance of at the moment due to his recent rich vein of form.
In other driver news, Haas team principal Günther Steiner revealed that he has made it very clear to Mick Schumacher that the 23 year old driver, who is in only his second year in Formula 1, cannot due to budgetary pressures continue to have major accidents.
With the German having already had expensive incidents in Saudi Arabia and Monaco, the outfit has already spent this season’s allowance for accident repairs with only seven of the 22 Grands Prix already completed. This leaves Schumacher in a difficult position as he is being pressured to both score his first F1 points to justify his retention for next year, whilst also being told to take it a little easier so as not to crash. Such is F1. 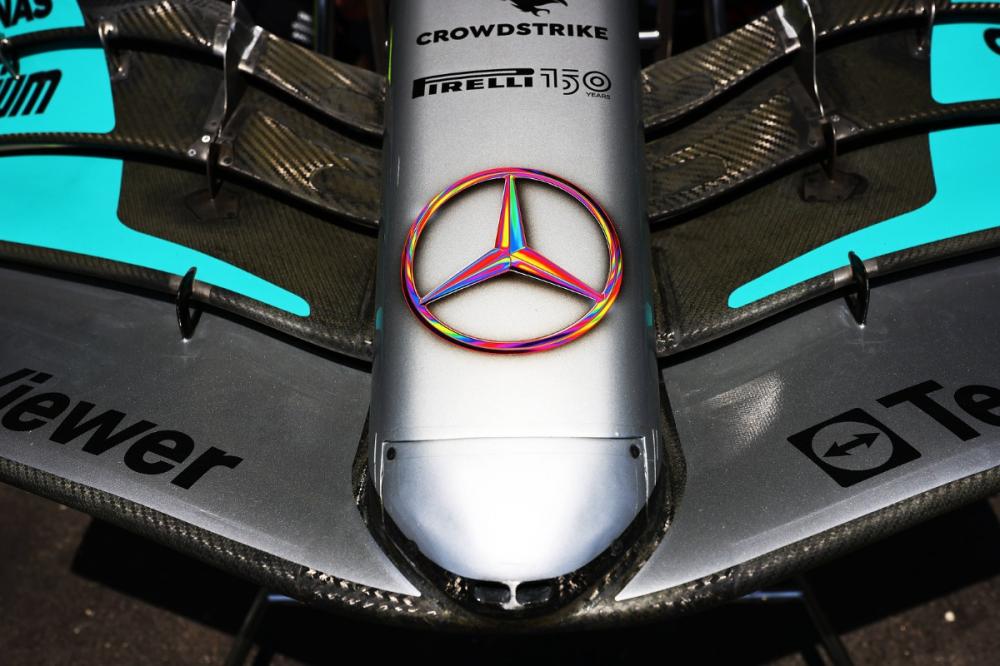 Mercedes has replaced its traditional logo with an LBGTQ+ Pride Star for at least three races
The Alfa Romeo team opted to run a one-off revised livery on its C41 cars this weekend, with green added to the regular red and white colours to celebrate the launch of the brand’s Tonale electric SUV road vehicle and with a clear reference to the Italian tricolour flag. Whilst on the subject of liveries, Mercedes had chosen to replace the traditional silver three-pointed star on the nose of its cars with a rainbow coloured Pride Star for the next three rounds of the championship in Azerbaijan, Canada and the UK in support of the LGBTQ+ community Pride Month. Hamilton is keen for it to remain in place for the remainder of the season, although this may cause issues when F1 visits Singapore and Abu Dhabi later this year where same-sex relationships are illegal.

Despite being a temporary street circuit there are more overtaking opportunities around the Baku track, which was a welcome change for all after the difficulties on this front experienced as usual in Monaco, and the teams’ strategists were also fully aware that the lower than average pit stop time loss of 21 seconds could lead to some creative thinking. Four of the five races to date in Baku have also featured Virtual or full Safety Car interventions and red flag stoppages occurred in both 2017 and 2021, meaning it would be important to react quickly come this afternoon’s Grand Prix.

Immediately after the conclusion of today’s race attention turned to the need to quickly relocate across the Atlantic to Montreal, with the Canadian Grand Prix following just a week later.
As the first free practice session began on Friday afternoon Verstappen was hoping for better luck in Baku as last year he was denied victory by a dramatic tyre blowout on the long full throttle 200+mph start-finish straight, which forced him into retirement. However, the Dutch reigning champion was only third quickest, suffering from DRS flap issues, behind a flying Pérez and Leclerc. In Friday’s later practice period Leclerc topped the timesheets, with Pérez, Verstappen and Alpine’s Fernando Alonso the best of the rest, whilst George Russell’s Mercedes ended up seventh fastest, five places ahead of his team-mate Hamilton, as their cars bounced and bottomed out violently at high speed. The start of yesterday’s final practice session was delayed by 15 minutes after a crash near the end of the preceding F2 sprint race necessitated barrier repairs, but come its conclusion it was Pérez who again led the way ahead of Leclerc, Verstappen and Sainz. 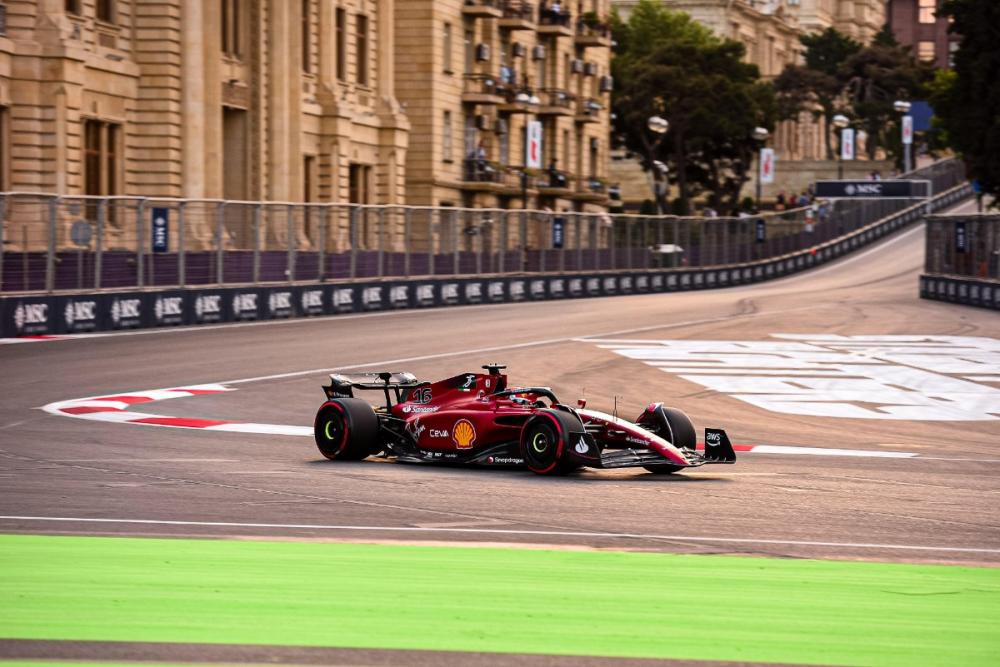 Charles Leclerc was left to rue another Ferrari power unit failure
The qualifying hour was also put back by 15 minutes as the F1 regulations require a two hour gap between the end of final practice and the start of the knockout process to form the grid for today’s Grand Prix. The opening part of qualifying had to be redflagged with two and a half minutes remaining after Lance Stroll’s Aston Martin hit the barriers at Turn 2 and in the second part the McLarens of both Lando Norris and Daniel Ricciardo were eliminated. In the top ten shootout Leclerc claimed his sixth pole position of the season ahead of Pérez, Verstappen and Sainz, whilst Russell was fifth as the quickest driver not in a Ferrari or a Red Bull and Gasly sixth.

1 Max Verstappen (Red Bull) 1hr34m5.941s
2 Sergio Pérez (Red Bull) +20.823s
3 George Russell (Mercedes) +45.995s
4 Lewis Hamilton (Mercedes) +1m11.679s
5 Pierre Gasly (AlphaTauri) +1m17.299s
6 Sebastian Vettel (Aston Martin) +1m24.099s
7 Fernando Alonso (Alpine) +1m28.596s
8 Daniel Ricciardo (McLaren) +1m32.207s
9 Lando Norris (McLaren) +1m32.556s
10 Esteban Ocon (Alpine) +1m48.184s
11 Valtteri Bottas (Alfa Romeo) Lapped
12 Alex Albon (Williams) Lapped
13 Yuki Tsunoda (AlphaTauri) Lapped
14 Mick Schumacher (Haas) Lapped
15 Nicholas Latifi (Williams) Lapped
16 Lance Stroll (Aston Martin) Retired
17 Kevin Magnussen (Haas) Retired
18 Guanyu Zhou (Alfa Romeo) Retired
19 Charles Leclerc (Ferrari) Retired
20 Carlos Sainz (Ferrari) Retired
Driving a Formula 1 car is very much a combination of both physical and mental abilities and self-confidence is crucial, something which Pérez has an abundance of at the moment due to his recent rich vein of form. The sun was beating down from a cloudless sky as the cars formed up on the grid and come the race start at 3pm local time (noon back in the UK) it was Pérez who made a brilliant start and edged past Leclerc at Turn 1 into the lead, with Verstappen and Sainz right in their wheeltracks. The latter’s race was to end on just lap nine though when his Ferrari ground to a halt at Turn 4 with a hydraulic issue and a Virtual Safety Car period began whilst the stricken car was moved to a safe place. Pit stops made under VSC conditions have a noticeably smaller time loss than those under normal racing and Ferrari quickly brought in Leclerc to switch from medium to hard specification tyres, with Mercedes doing likewise with Russell and Hamilton.

Racing soon resumed and at the start of lap 15 Verstappen claimed the lead from Pérez at the first corner, with Leclerc and Russell the best of the rest. Verstappen soon started to pull clear of his team-mate before the latter headed down the pit lane on the 17th tour for his own change from medium to hard rubber. After Verstappen did likewise two laps later Leclerc had a clear lead out front, but his day’s work was about to end after a smoking power unit failure forced his retirement, completing a miserable afternoon for the team in red from Maranello. This left Verstappen leading from Pérez and with Russell promoted into the final podium position. 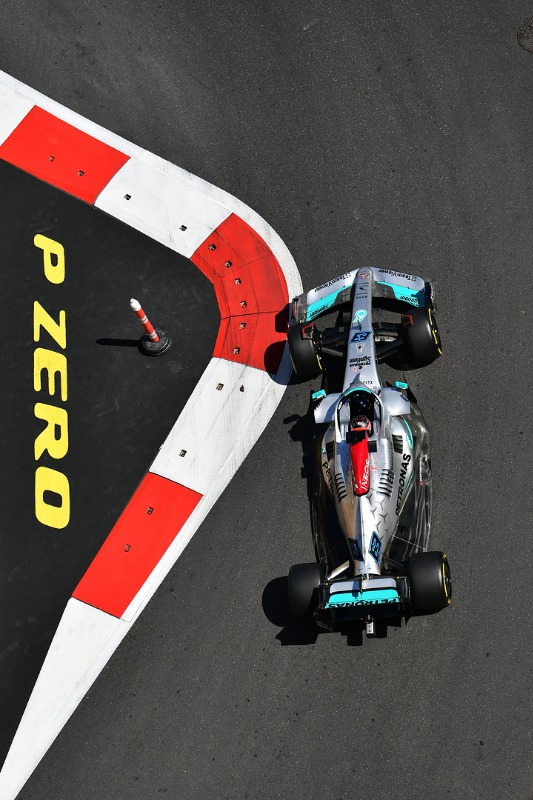 George Russell again led the way for Mercedes with a third podium finish of the season
By lap 26 Hamilton had climbed to fifth position behind Gasly, but was soon complaining over the radio, saying “My back is killing me!” This year’s new cars run much closer to the ground than previously and this, together with the porpoising effect from the aerodynamics, has made the latest Mercedes very uncomfortable to drive other than on very smooth circuits. The team could solve the problem instantly by raising the ride height, but this would lead to a loss in performance and so both drivers have been asked to put up with the pain until a solution is found.

Ferrari certainly seems to have its own technical issues which need addressing as quickly as possible as, in addition to their own cars having to retire, the Ferrari powered Alfa Romeo of Guanyu Zhou and the similar Haas of Kevin Magnussen also failed to finish the race. The Dane’s retirement forced a further VSC intervention and both Red Bull and Mercedes took the opportunity to pit their cars for a second time for further hard tyres.

Green flag conditions soon returned and with seven laps remaining Hamilton passed Gasly for fourth place, a position he retained to the chequered flag behind the podium trio of Verstappen, Pérez and Russell. It was the Mercedes driver’s third podium finish of the year as the impressive youngster from King’s Lynn maintained his record of finishing in the top five at every Grand Prix this season. Gasly and Aston Martin’s Sebastian Vettel completed the top six finishers and Pérez took the extra point for the fastest lap of the race. 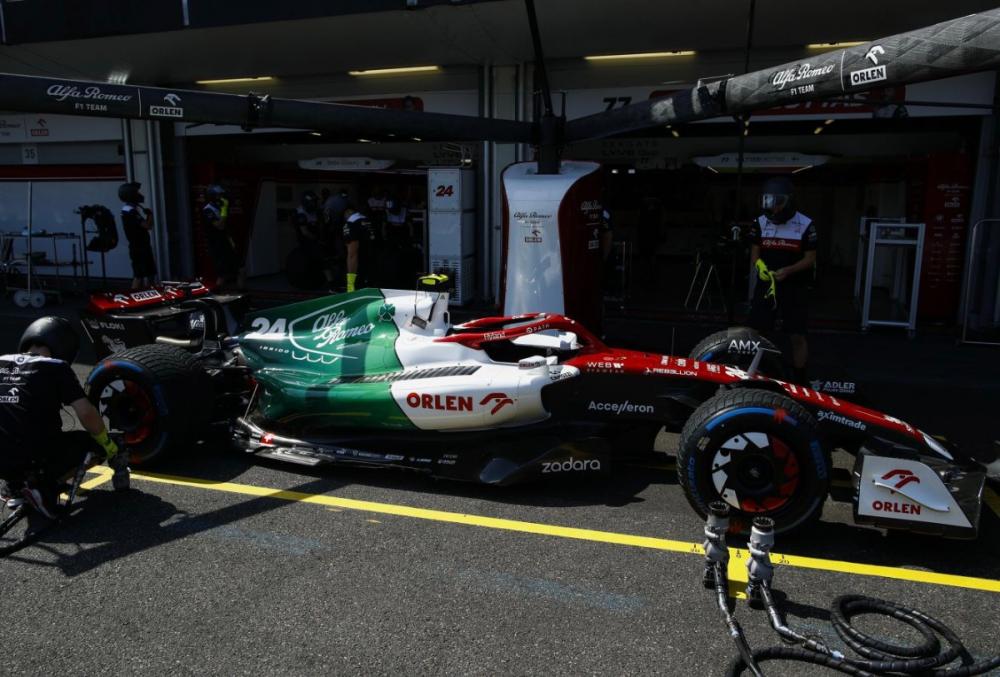 Alfa Romeo sported a revised livery this weekend to celebrate the launch of its new Tonale electric road car
Immediately after the conclusion of today’s race attention turned to the need to quickly relocate across the Atlantic to Montreal, with the Canadian Grand Prix following just a week later. With the cars and drivers due back in action in just five days’ time at the Circuit Gilles Villeneuve on the man-made Île Notre-Dame a short distance from central Montreal, Formula 1’s renowned logistical prowess will again be tested to the full. The Canadian city truly embraces the visits of Formula 1 and there’s always a fun atmosphere on the downtown streets and in the bars and restaurants to accompany the ontrack action as this season’s thrilling fight for supremacy continues. Hamilton was clearly struggling with back pain this afternoon as he slowly climbed out of his misbehaving Mercedes after the race and it is hoped that he will be fit enough to compete in Canada next weekend on another bumpy circuit which will not be kind to his vertebrae.


Also by Graham Read...
Oscar ﻿Piastri At Centre Of F1 Contracts RowAlonso To Race For Aston Martin From 2023 OnwardsVerstappen Flies ﻿From 10th To Victory In HungaryFour-Time F1 Champion Vettel To RetireVerstappen On Top In France Ahead Of Mercedes Duo