After a dramatic week during which Lewis Hamilton had to self-isolate after testing positive for COVID-19 and an agreement was reached between the Mercedes and Williams teams for the highly popular 22 year old George Russell from King’s Lynn to cover his absence, we then witnessed an action packed first ever Sakhir Grand Prix. Russell had looked set to take an amazing victory on his Mercedes debut until a combination of pit stop errors by the usually slick team and then a puncture left Racing Point’s Sergio “Checo” Perez to take his first ever win, a Mexican driver last having won in F1 back in 1970. 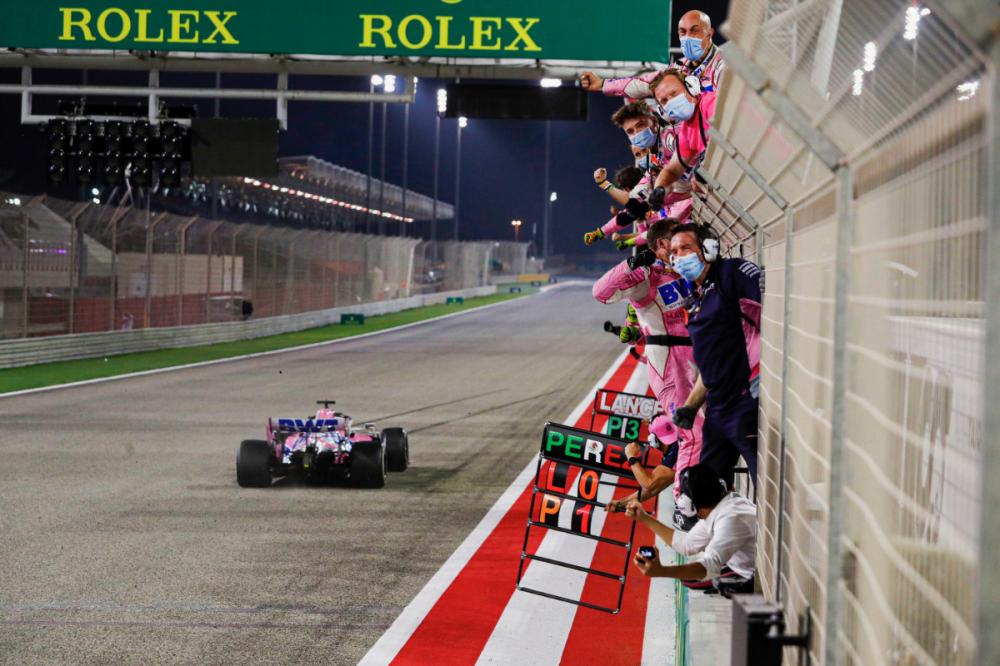 Sergio Perez was delighted to take his first ever win
The Sakhir Grand Prix, named after the Bahraini region in which the facility is located, was held on the outer loop track as a night race under floodlights, starting at 20.10 local time. With less corners and being shorter in length than the standard circuit used for the previous weekend’s Bahrain Grand Prix it was set to be a flatout 87 lap blast into unknown territory. It ranked as F1’s second shortest circuit behind Monaco and quickest in terms of well under a minute lap times, With such a short 2.2 mile lap, ontrack “traffic” problems had been a concern for both qualifying and the race and lap times would be more closely bunched than at longer circuits.

Russell is a member of the Mercedes young driver programme and was set to be the first from its ranks to race for the works team, having spent the last two seasons, his first in world motorsport’s highest championship, driving for the by comparison relatively lowly Williams team. There was a wave of genuine excitement about Russell’s debut for Mercedes at a time when the season would normally have been petering out with both championships already decided. The young British driver seems to have captured the imagination and support of so many F1 fans and also so many who wouldn’t normally follow the sport.

He is five inches taller than Hamilton, which made the W11 an uncomfortably tight fit, and was forced to squeeze into race boots a size smaller just to get his feet on the pedals. To add to his discomfort his seat didn’t fit him properly either, but nothing was ever going to stop him missing this totally unexpected special opportunity. Apart from the pain, Russell also faced a big task in only having a couple of days to get to know the car, the different layout of its complex steering wheel controls and his new engineers. 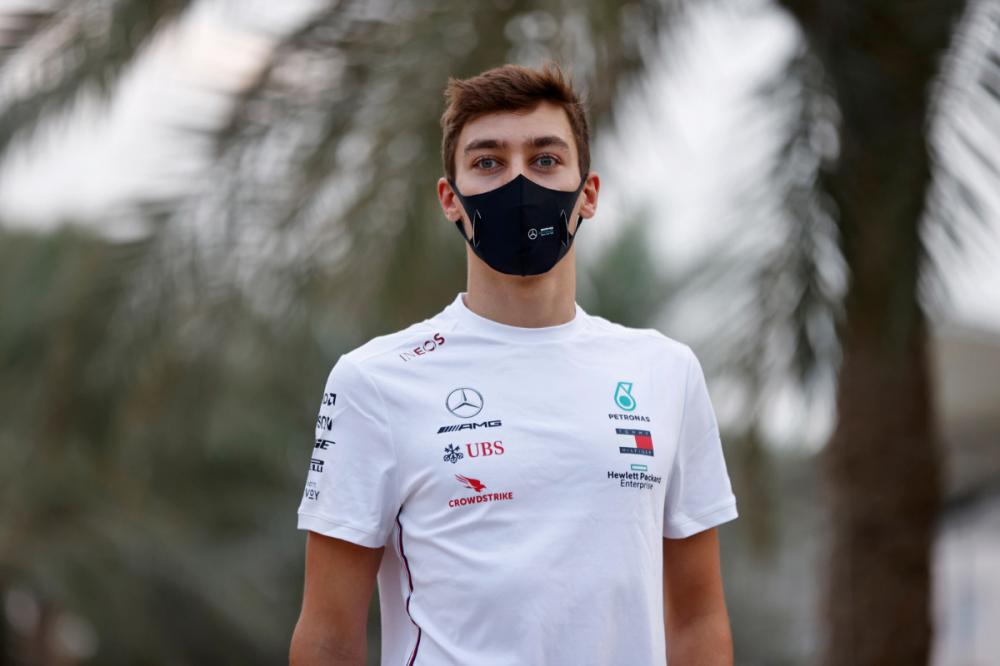 George Russell was denied a victory on his Mercedes debut by team blunders and a puncture
Mercedes’ Valtteri Bottas has tended to be outperformed since 2017 by regular team-mate Hamilton and knew he had to beat Russell to maintain his credibility, although team principal Toto Wolff denied they were treating the weekend as a shootout between the pair for a potential 2022 seat deal. Bottas already has a contract for next year, although that does not guarantee the Finn he will be staying if Russell were to really impress.

Elsewhere in the paddock Pietro Fittipaldi, grandson of the Brazilian two-time Formula 1 world champion Emerson Fittipaldi, was set to step up from his Haas reserve driver role to replace the injured Romain Grosjean and make his F1 debut. Fittipaldi had returned to racing after breaking both legs in May 2018 in a qualifying accident for the Six Hours of Spa World Endurance Championship event in Belgium. Grosjean had been warmly greeted in the Formula 1 paddock when he returned on Thursday evening following his earlier discharge from hospital, but his injuries mean he will have to miss the final two races of his last season in F1 after already having been dropped by Haas for 2021.

Whilst on the subject of Haas, their driver pairing for next year will as expected be the German Mick Schumacher (son of the legendary Michael) alongside the Russian Nikita Mazepin and it was the former who became this year’s Formula 2 champion in the final race of the season which preceded the Grand Prix. There was good news too at the Williams team for its British-South Korean reserve driver Jack Aitken, who was suddenly set to make his F1 race debut following Russell’s temporary promotion. 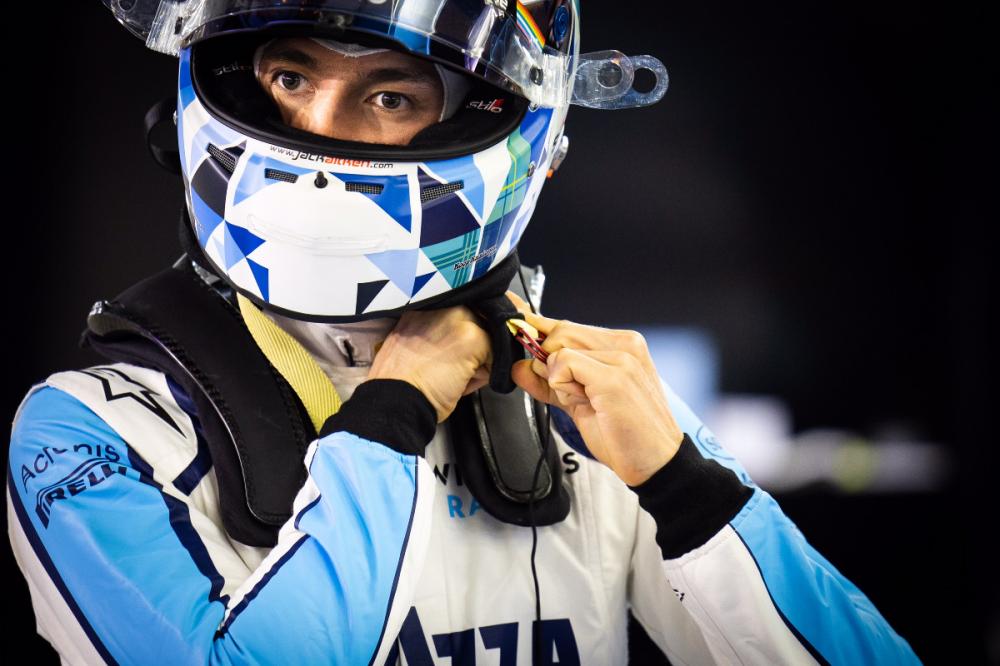 Russell’s promotion created an F1 race debut at Williams for British-South Korean driver Jack Aitken
Perez, still without an F1 seat for next year despite driving better than ever, had announced at a press conference in Bahrain on the Monday evening before the Sakhir race that, if Red Bull didn’t want him to replace Alex Albon next season, he may look to take a one year sabbatical before pursuing 2022 options which he claimed to already have. After the result of today’s Grand Prix it will be interesting to see what decision Red Bull make about their 2021 line-up.

We also witnessed a little spat between the Renault and Racing Point team principals when it was announced that the FIA governing body had decided to allow Renault’s 39 year old Fernando Alonso to take part in the end of season Young Drivers test along with Alfa Romeo’s 35 year old Robert Kubica and 32 year old Formula E racer Sébastien Buemi. Paddock wits had suggested that Sir Jackie Stewart and Nigel Mansell might be the next to be allowed to join in! 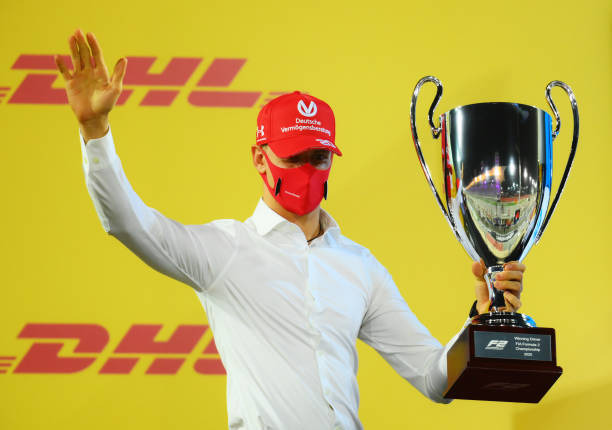 A happy Mick Schumacher after today becoming this year’s F2 champion
Come Friday’s eagerly anticipated opening free practice session it was a truly impressive first stint in the Mercedes for Russell as he topped the timesheets ahead of Red Bull’s Max Verstappen and Albon. Significantly he was also almost a third of a second faster than his team-mate Bottas, who knows that Mercedes car so well.

In Friday’s second free practice period Russell’s dominance amazingly continued as he again led the field ahead of Verstappen, Perez and Renault’s Esteban Ocon, with Bottas ending up only 11th quickest after having the fastest lap of the session deleted due to running wide at Turn 8. There was a bit of a reality check for Russell though in Saturday’s third and final practice when Verstappen and Bottas headed the leaderboard and the new Mercedes driver was only seventh fastest.

However, Russell showed his class during the qualifying hour and missed out on pole position by a mere 0.026s from Bottas as Mercedes claimed another front row lockout. Verstappen helped himself to his now usual position as the best of the rest and Ferrari’s Charles Leclerc put in a stunning lap to claim fourth on the grid for the following day’s Grand Prix.

Interestingly both Mercedes cars had a different strategy to the rest of the top ten starters, lining up on medium specification tyres compared to the grippier but less durable softs for the others, and when the red lights went out it was Russell who made a superb start and immediately swept past his team-mate into the lead. An opening lap safety car was soon required though after Leclerc made contact with Perez and Verstappen had to take avoiding action. The result was the Ferrari and Red Bull cars out of the race and the Racing Point making a very early pit visit. 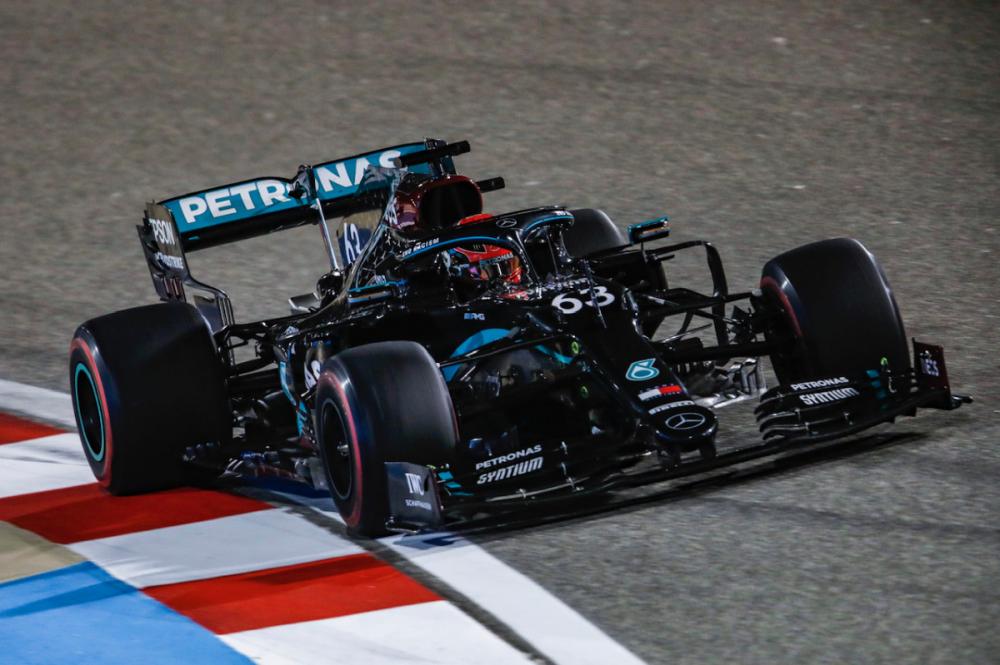 A flying Russell surely has a bright F1 future ahead of him despite tonight’s disappointments
The safety car headed back down the pit lane at the end of the sixth tour and Russell started to extend his lead over Bottas, with McLaren’s Carlos Sainz and the Renault of Daniel Ricciardo the best of the rest. The first stops for those amongst the leading sextet on soft rubber began on lap 28 and such was Russell’s pace out front that he lapped Haas’ Fittipaldi just three tours later.

On lap 45 Mercedes pitted Russell to switch him to hard tyres, which would see him to the end of the race and four tours later Bottas was pitted for the same, rejoining the circuit a massive 7.7s behind the leading Russell. After a brief virtual safety car period in response to the Williams of Nicholas Latifi becoming stranded trackside racing resumed and soon the recovering Perez had climbed from last on the opening lap to third.


Also by Graham Read...
﻿Hamilton Holds Off Verstappen In A Bahraini ThrillerR.I.P. Johnny Dumfries, The 7th Marquess Of Bute 1958-2021﻿R.I.P. Peter Lorimer 1946-2021R.I.P. Sabine Schmitz 1969-2021 “The Queen Of The Nürburgring”﻿Red Bull’s Verstappen Fastest In F1 Testing
However, the race was about to be turned on its head for poor Russell out front as on lap 62 another virtual safety car period, which quickly became a full safety car deployment, was required after Aitken ironically lost control of what would have been Russell’s Williams car at the final corner and left its dislodged front wing in a dangerous position and in need of recovery. At this stage Mercedes questionably decided to pit Russell and Bottas together to switch to medium tyres just as a precaution, but it went disastrously wrong and the crew fitted the wrong tyres to Russell’s car and then got themselves totally confused about Bottas’ car, knowing there had been an error and refitting the tyres they had just taken off. This then left Russell being told of the error re his tyres over the radio and having to pit again to correct the blunder. The end result was that Russell now found himself back in fifth position rather than a clear lead, just behind Bottas.

When racing resumed the rising star from Norfolk went on the attack and quickly passed Bottas, Stroll and Ocon to run second behind the now leading Perez. Whilst Bottas started to drop down the order on his worn rubber, further bad luck was about to befall Russell as a rear left puncture forced him to pit again and rejoin down in 15th position. As the chequered flag neared he at least managed to climb back up to ninth position to score his first ever F1 points, topped up by the additional one for the fastest lap, but this was on an evening when he would almost certainly otherwise have had a fairytale victory. At least Russell had done enough throughout the weekend to show Toto Wolff and the Mercedes team just what he can do and this will have been duly noted. It is as yet unclear whether Hamilton will be well enough to return for the next race, but, if not, Russell will be retained to again show what he can do. 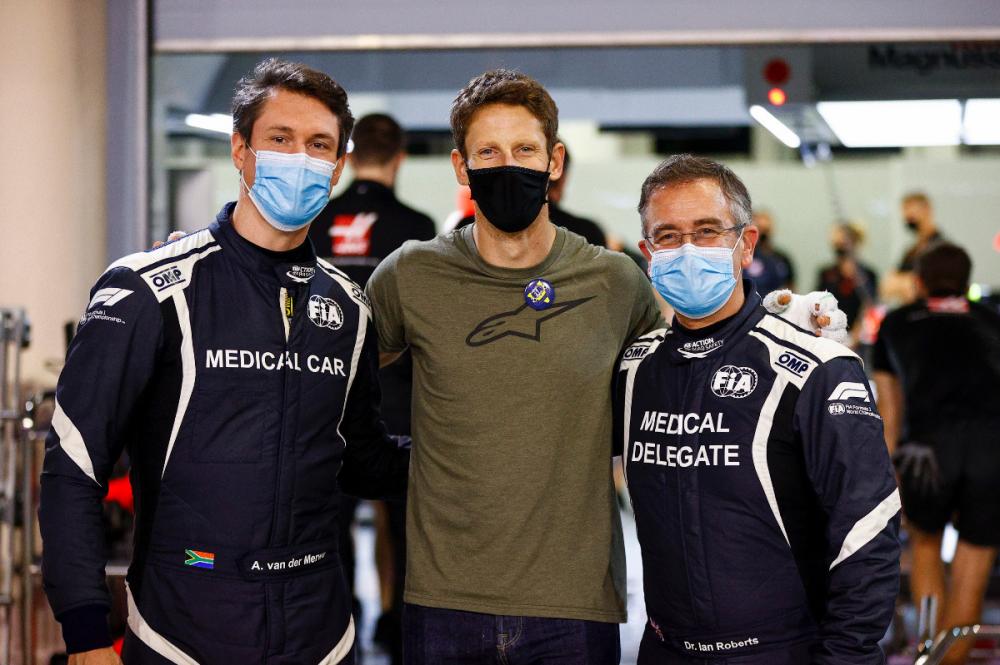 Romain Grosjean chatting to the medical car team who helped save his life a week ago
Despite the impact of the pandemic F1’s owners Liberty Media and the FIA have done a brilliant job in organising and running a 17 race 2020 calendar under such difficult circumstances. After the conclusion of the second consecutive Grand Prix in Bahrain today everyone was busy packing up for the short relocation to Abu Dhabi for the usual final event of the season next weekend.