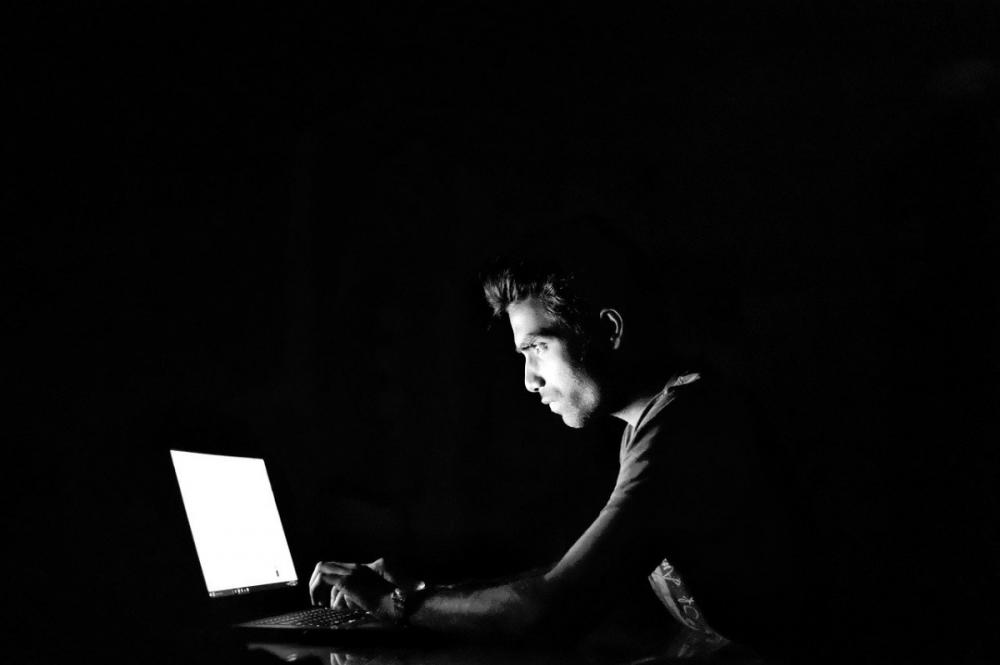 A Hacker at work. Image by Robinraj Premchand from Pixabay
Data protection and identity theft are hot topics in the IT industry at the moment, with an increasing number of individuals and businesses reporting incidents.

In a broad look at the current cyber-threat landscape we can explore what bitcoin is and how the technology could help with cases of commercial and individual fraud and identity theft.

In today’s online age, we’re used to entering our personal credentials to create an account on a website – be it social media, retail outlets, or news publications.

In fact, it’s no secret that many people have such a vast number of accounts – with lots of logins swimming around in their heads – that they simply click ‘forgotten password’ and create a new one, seeing it as the easiest way to access their profile. That, or they’ll access it via other means – such as Facebook or Google – which they’re already logged into.

This concept of fast-paced data creation and data sharing is nothing new, and these days, it’s seen as ‘normal’ – and often there’s no visible monetary cost.

But I’m of the opinion that there’s no such thing as ‘free’. If you don’t pay for a product – i.e. download a document, sign up to a trial, or create an online account – you’re usually providing something a company or individual wants. And more often than not, that’s your data.

Therefore, it could be argued that you then become the product.

And given 79% of respondents in a survey led by Pew admitted to being concerned about how their data is being used by companies or the Government, it’s time something was done to alleviate and resolve this fear.

A shift in the cyber security tide

There’s no denying that 2020 was a difficult year for businesses and individuals alike, and it also produced a record number of data loss incidents – via cyber-attacks and breaches.

Phishing may be on the rise to obtain people’s data, but we’re arguably experiencing a tipping point in the industry, and it’s likely that data ransom will soon be replaced with higher cases of identity theft.

In fact, according to a report carried out by PWC, 47% of 5,000 companies surveyed admitted to having experienced fraud in the past 24 months – which, in turn, amounted to $42 billion in total losses.

And in the Credit Industry Fraud Avoidance Scheme’s (CIFAS) annual UK report, it revealed there were over 174,500 cases in 2017 – almost all of which occurred online.

The truth is that identity theft is happening now, and it’s taking place much more frequently than it ever has before. But if we can solve the identity security puzzle and develop foolproof measures that confirm someone is who they say they are, all the fraud in the world disappears – and that’s a powerful thing.

Is blockchain technology the solution to online privacy concerns?

To answer this question, we first need to establish what blockchain is.

According to the Investopedia definition, a Blockchain is:

“a blockchain is a type of database
different types of information can be stored on a blockchain, but the most common use so far has been as a ledger for transactions.
Decentralized blockchains are immutable, which means that the data entered is irreversible. For Bitcoin, this means that transactions are permanently recorded and viewable to anyone”

This is where anonymity comes into the equation.

With data stored in a blockchain, there’s no reliance on, or trust in, a third-party to protect your data – including all identity documents such as certifications, licences, vaccinations, civic records, and more.

There is one company which has developed a blockchain-based identity solution to help solve this issue – enabling individuals to be the sole owners of their data and digital identity, so only they can choose who they share it with.

In addition, if technology can prove that everyone is who they say they are, this doesn’t only have massive financial advantages – with less money being laundered – but it also improves online safety. Children, for instance, wouldn’t be allowed to set up social media accounts or access any adult content until they are old enough.

So, what’s next for identity?

With our daily lives reliant on digital ways of working, technology will continue to play a big part in how we socialise, interact, and transact.

Taking the recent NHS app as an example, with talk of implementing vaccine passports to show proof of having been immunised, there are always new potential strands to our identities which we are sharing on a regular basis.

Back in August, I spoke about the Track and Trace app and whether the Government should be involved in creating such solutions, or whether it should be placed in the hands of tech experts. But I firmly believe that the future lies in a more decentralised approach, where there are no corporate ‘governors of identity’ who hold people’s data.

At the moment, no one is truly taking responsibility for online privacy, and the world definitely needs to improve upon this, if we’re ever going to eradicate fraud and keep our personal data and identities safe from fraudsters.