Next Steps For New Unitary Councils In Cumbria & North Yorkshire 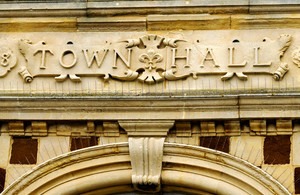 The plans will move the areas away from a two-tier system of county and district councils to unitary councils, strengthening local leadership and transforming the way services are delivered in these areas.

Establishing these new unitary councils will help ensure the people and businesses across Cumbria and North Yorkshire can have the sustainable high-quality local services they deserve.

This reorganisation will bring significant benefits to Cumbria and North Yorkshire, giving the local leaders there tools to help level up opportunity and prosperity across their communities.

The locally-led plans are being taken forward after a period of consultation which considered views from residents, business leaders and councils.

The Local Government Secretary has asked the existing councils and their partners to work collaboratively and constructively together to drive forward the process of establishing unitary councils.

Local Government Secretary Rt Hon Robert Jenrick MP said: "I have always been clear that any restructuring of local government must be locally-led and will not involve top-down solutions from government.

"Residents, businesses and service providers have had their say on what will work best for their area and now councils in these three areas can start planning for the next step.

"Where there is local support, changing the structure of local government can offer better value for money and improved services for residents."

This follows an announcement by the Prime Minister last week whereby he set out his vision to level up and unite the whole of the United Kingdom. In a speech, he set out the government’s role to:

empower strong local leaders by taking a more flexible approach to devolution, with new ‘County Deals’
focus on growing the private sector by creating the conditions for long-term growth and productivity;
invest in infrastructure and connectivity;
ensure that people have access to good public services, and the skills and training needed to get good jobs; and
improve the quality of life in communities through cutting crime and regenerating towns and high streets

Moving forward, Parliamentary approval will be sought to implement these locally led plans for the area. At the turn of the year, a draft structural changes Order will be laid in Parliament. This will include plans for the necessary transitional arrangements, including for elections in May 2022 for the future unitary councils.


Also by Andrew Palmer...
Weekend Interview: Putting A Smile On The Face Of The NationKey Moment As Historic Leeds Town Hall Organ Pipes Down For Major RevampI'm Dreaming Of A ... Or Perhaps Not!Weekend Feature: Spreading The Spirit Of Yorkshire Far And WideWeekend Dining: The Fat Badger