In Need Of KOREA Advice?

If you can’t currently contemplate Korea, then the next best thing – in preparation for your long haul jaunt – is to look to the The Korea Tourism Organization London (KTO) which has just launched a vegan K-Box campaign to showcase the diversity of the country’s cuisine.

The smart idea also provides the chance to win one of 200 Korean vegan food boxes, and a serious serving of Asian wanderlust!

So, by way of getting into the spirit of Asian cooking, KTO, kindly sent me a food kit to get to grips with, and, although it tasted pretty good, I cannot lay claim to the beautiful PR photo at the head of this article! See my finished version below! 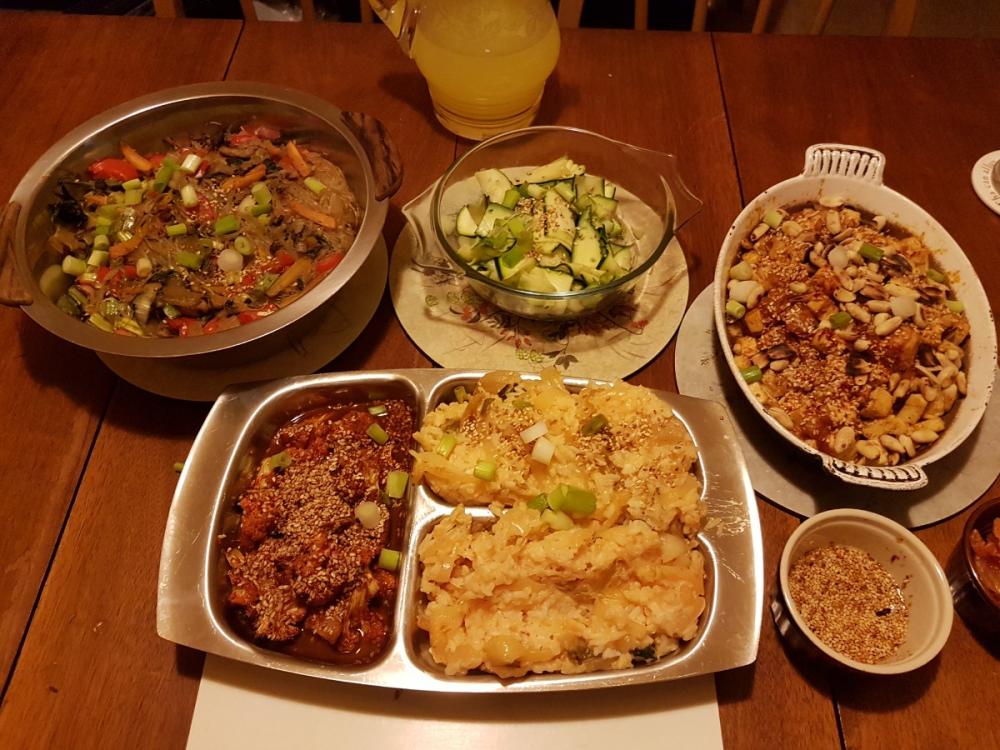 Hopkins version!
KTO has teamed up with meal kit specialist Feast Box to bring the UK a taste of Korea with their Vegan Korean Party Boxes, which arrived with enough food to feed an army (up to six) and cooking instructions that require military precision planning! 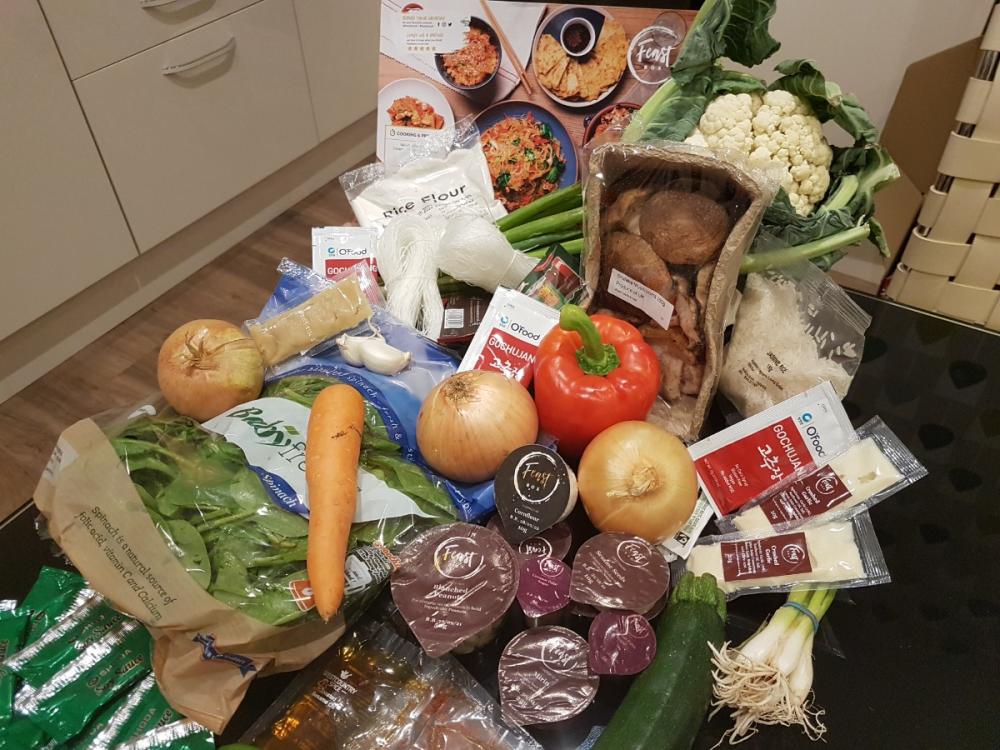 It is great fun for a ‘slow’ evening but give yourself plenty of time. The evening meal turned into a midnight buffet!

I personally engaged the assistance of my friend John, a construction engineer and project manager(!) as we began the 8pm – 11pm quest: we later realised that an earlier start time might have been helpful! 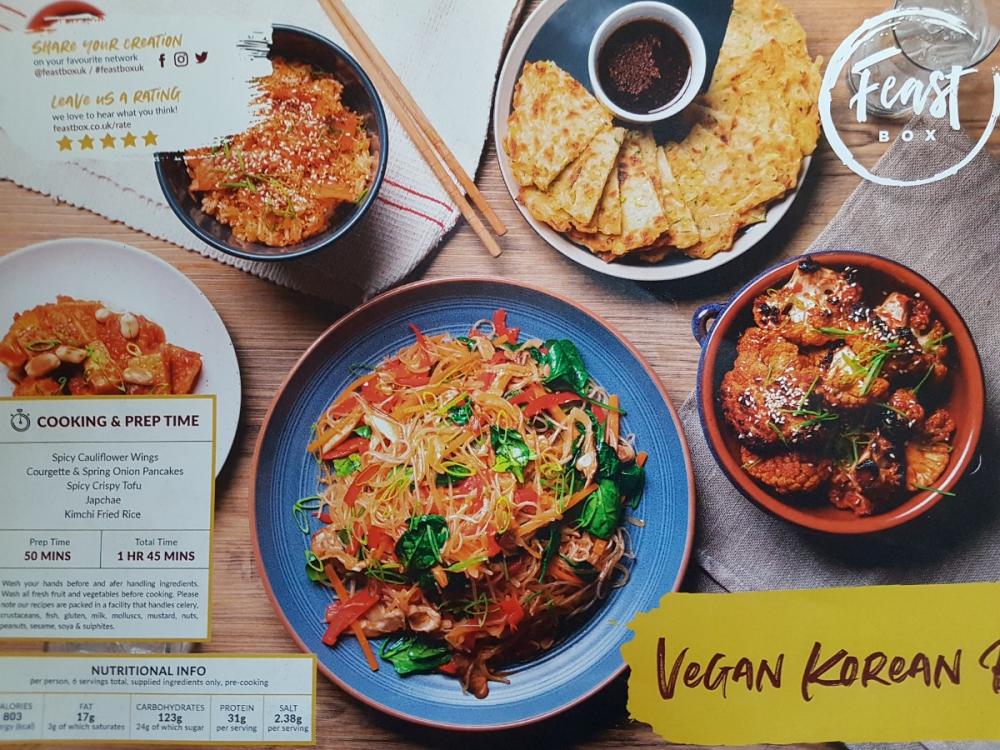 We successfully got to grips with the lot – three of us were frantically chopping and frying – however, our only disaster were the pancakes.

But, fear not, our Project Manager was at hand next morning.

“Phil, it’s John. I have great news,” he said as I had barely stumbled out of bed still smelling slightly of all foods Korean!

“The pancake mix. I’ve sorted it.”

“I added an egg and it now works beautifully.” We high-tailed it round to pick raspberries from his garden finishing the afternoon with, you’ve guessed it, Courgette & Spring Onion Pancakes, albeit slightly later than expected!”

And I have to say that, overall, the food was pretty tasty: John said he would have liked a ‘bit of fish in there’ whilst I welcomed the fact that the extremely low calorie count of the entire meal left my godlike figure intact!With its diverse flavours and unique health benefits, Korean cooking has captured the attention of foodies worldwide. But looking back at the history of the cuisine reveals a strong focus on plant-based ingredients, with meat and dairy used sparsely or even left out.

Korean temple food in particular originated over 1,600 years ago and is based on the Buddhist principles of zero waste and sustainability as well as being entirely vegan. The mountains of Korea, where temples are traditionally built, are the ideal place to source natural, fresh ingredients which are crafted into nutritious dishes packed with flavour.

The best place to try vegan Korean food is at one of the many temples which open their doors to visitors for “templestay” experiences – usually a one- or two-night stay including meals, meditation and craft workshops.

You can also experience temple food and culture at various restaurants in Seoul, including the famous Balwoo Gongyang. But you’ll find vegan-friendly dining wherever you go in Korea – a useful phrase is “고기를 빼주세요 / gogireul bbaejuseyo” which means “please leave out the meat”!

Enter into the prize draw for the chance to win one of 200 boxes: k-box.ukMeanwhile, I must go……there’s enough washing up for three dishwashers and I don’t even have one! Happy cooking!


Also by Phil Hopkins...
Food For The Cash Rich But Time Poor?Fred Olsen Offers Health Initiative For Those With Long-Term ConditionsWorthy Boost For Buxton - The Buxton Crescent HotelLovestruck Lovers Get The Call From GreeceLondon’s Powerful ‘9/11’ Musical – Come From Away