Five, featuring Ritchie Neville, Sean Conlon and Scott Robinson were originally formed in 1997 by the same team behind the Spice Girls. They sold over 20 million records, amassing numerous music awards and partying hard, gaining a reputation for being the bad boys of pop and paving the way for the new wave of pin up boy bands with attitude. They reformed for the ITV series The Big Reunion in 2013, which generated headline news and much showbiz excitement! The band sold out their own headline tour of the UK in 2014.

Ritchie, Scott and Sean, who have just finished the sold out Boys Are Back Tour across the UK, decided that they would only do new music if they had the time to do it properly. Lockdown provided the opportunity to do exactly that and they wrote and produced their first album in 20 years ‘Time’, due for release in early January

I spoke to Scott and Sean who is from Leeds about the new album and single.

Are you excited to be releasing a new album?
Scott: With being in lockdown we had the time to write and record the new album and turn a negative situation into a positive one. It is over 20 years since we last released an album so yes, we are very excited about the new album. There will be some rocky type songs on there, a few rapping songs - a bit of everything really. We have grown up a lot since the last album but this new one we are very happy with.

Sean: With the lockdown it seemed to be the perfect time to record the new album. It seems people still like the band, no one could have predicted that 90’s music would still be as popular as it is today. 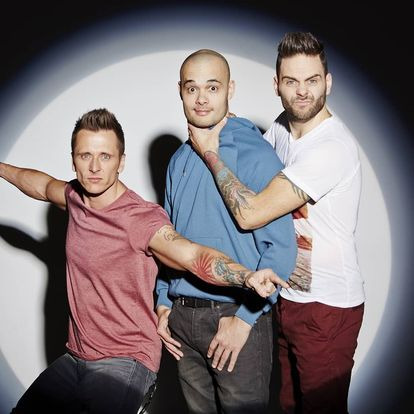 What is your proudest achievement with Five?
Scott: For me it has to be performing We Will Rock You with Queen, they were gentlemen to work with and very down to earth.. Roger Taylor, Queen’s drummer even invited us to his house.

Sean: Getting a record deal felt a massive sense of achievement, it was for the band to release five albums and for me it was the anticipation of what was to come next.

Would you like to be starting out as a new band now?
Sean: It is a lot harder now as the landscape has changed so much since when we first started. I still look at the charts - there are some fantastic artists out there like Adele, Ed Sheeran and Dua Lipa, but there is also a lot of rubbish out there too. The good thing though is that now there are a lot more opportunities to hear music than there were back in the 90’s. With this new album we are not trying to recreate the past but trying to sound like who we are now.

Scott: Things have changed so much, these days you tend to discover new songs through Tik Tok and the like. I try to keep up with things which is quite easy for me as I have a drive time radio show in Essex.

What have you both been doing since Five split up?
Scott: It was a weird time for me, Five split up on 27 September 2001 and I got married the next day! I grew a beard and put on two stone in weight. There was the reunion too of the band after the ITV programme The Big Reunion.

Sean: We were all children really first time around so when we got back together again as part of The Big Reunion it seemed to be at the right time. We played a gig at the Hammersmith Apollo in London too.

Have you heard Sean about the reopening of the Bradford Odeon?
I have and it is fantastic news for Bradford as it is a great city. I take my kids to see the panto at the Alhambra which is just next door, we really like to see Billy Peace - he’s a legend. Unfortunately we can’t go to see this year’s panto as I am busy. I have often looked at the old Odeon building and wished they would bring it back to life. We would definitely play there when it re-opens if we were asked.

I still live up in Leeds - I love the openness and honesty along with the friendliness of people from the north which you do not get down south,

Have you any plans to go on tour?
Scott: We are looking into it - there is going to be a tour entitled 90’s Baby, possibly eight dates with us and other artists from that time, like Peter Andre, East 17, Liberty X and Atomic Kitten. In the meantime the new single is out now with the new album out in January though people can pre-order the album now.

https://linktr.ee/FiveOfficial
Also by Graham Clark...
Interview With Dave Hemingway - Ex Beautiful South SingerAlbum Review: James Taylor Quartet - Man In The Hot SeatAlbum Review: Berries - How We FunctionInterview With The BrooksAlbum Review: Example - We May Grow Old But We Never Grow Up