Hamilton On Top Again As Mercedes Seals Another Constructors Title

Formula 1 made a coronavirus induced yet emotional return to Imola in northern Italy this weekend as it was where we lost the iconic Ayrton Senna as well as Roland Ratzenberger on that awful weekend back in spring 1994. Fortunately there were no such dark events at the famous circuit this time round and it was Lewis Hamilton who again emerged with the victory spoils as his all-conquering Mercedes team wrapped up the constructors title for a seventh year running and with four races still to go. 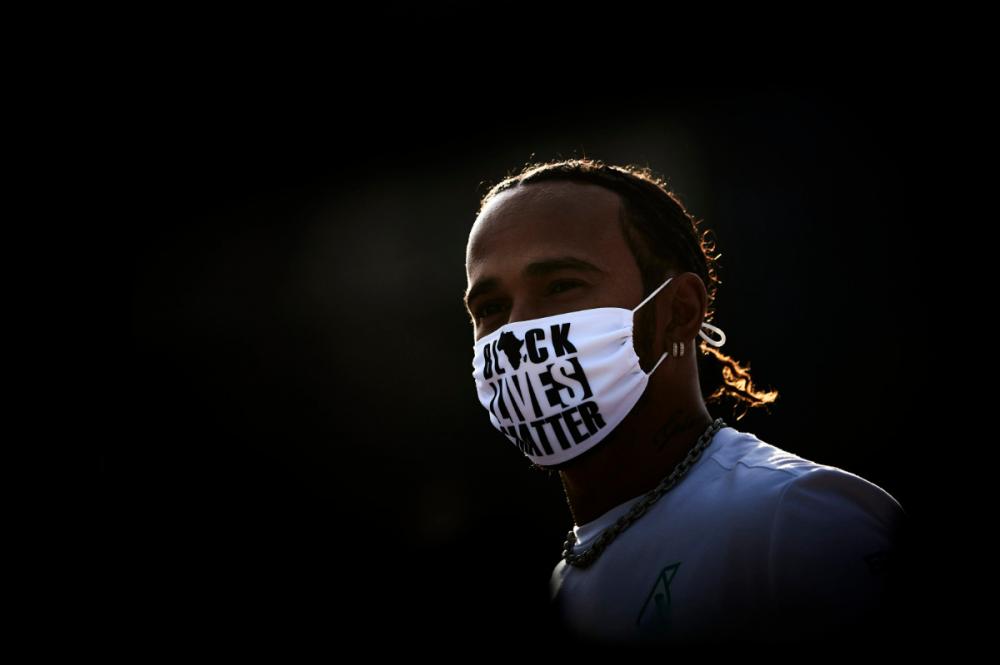 A timely virtual safety car period very much helped Lewis Hamilton clinch another victory
It’s many years since I’ve visited the wonderfully located Imola circuit and an intended return in May had to be cancelled due to pandemic restrictions. The Autodromo Internazionale Enzo e Dino Ferrari had last hosted an F1 race in 2006 and back then they were mainly called the San Marino Grand Prix in relation to the nearby small republic and because Monza, near Milan had become and still very much is the home of the Italian Grand Prix. As a result today’s latest round of the Formula 1 world championship was entitled the Emilia Romagna Grand Prix after the beautiful region of Italy in which it is located.

In the days leading upto this weekend’s event the F1 world was awash with various news stories, starting with Mercedes’ announcement that the car company would be acquiring a 20% shareholding in the British luxury car manufacturer Aston Martin, which will have its own Formula 1 team next year (the outfit currently known as Racing Point). With planned co-operation on both the road car and F1 fronts, Aston Martin and Racing Point’s Lawrence Stroll referred to this development as a “transformational moment”. Mercedes motorsport boss and Formula 1 team principal Toto Wolff and new Aston Martin driver Sebastian Vettel have already shown their own commitment to the company by purchasing private shareholdings.

Elsewhere on the driver front the Italian based AlphaTauri team announced that France’s Pierre Gasly would be retained for next season, but it seems likely that Daniil Kvyat may well be replaced by 20 year old Honda backed Japanese Formula 2 pedaller Yuki Tsunoda. Over at Alfa Romeo there was also confirmation that Kimi Räikkönen and Antonio Giovinazzi would be keeping their seats for 2021 and crucially for young British rising star George Russell his Williams team issued a press release saying that he and Nicholas Latifi would be their drivers next year. 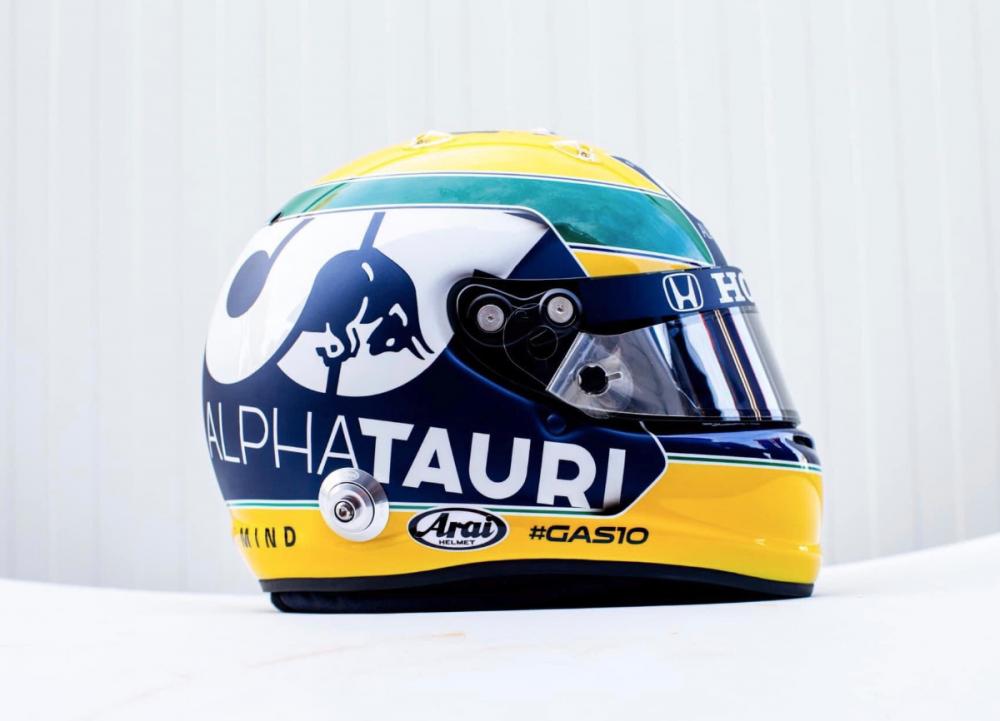 Pierre Gasly’s helmet design was a fitting tribute to Ayrton Senna
This leaves Sergio Perez still looking for an F1 berth in 2021 and, if as expected the Haas team introduces German Mick Schumacher and Russian Nikita Mazepin, the experienced Mexican’s only real hope seems to be fighting Nico Hülkenberg for an opening at Red Bull if they choose to drop the under pressure Alex Albon.

With Hamilton still not ready to sign a contract to stay with Mercedes next year, there was an interesting development this week when all the team principals agreed to a proposal by the Formula 1 Commission that there should be a $30m cap on the joint cost of each team’s two drivers annual salaries, starting in 2023, with a separate cap too on the salaries of the three other highest paid members of staff (usually including the team principal and the technical director). There is already an intention to introduce a team spending cap next year of $145m, if significantly excluding key cost elements such as driver and senior management salaries. It is also proposed that from 2023 teams will be allowed to spend more than $30m a year on driver salaries, but at the expense of a related reduction in the team budget cap.

Lastly on this week’s news front, Mercedes’ Formula E team revealed that it will be dropping the black livery it introduced for the final 6 races of last season in Berlin in favour of one with far more silver again for the 2020/21 season. It is as yet unclear whether Mercedes’ F1 outfit will follow a similar route for next year.

Turning back to Imola, due to the whole F1 circus having to relocate the 1500 miles from last Sunday’s race down on Portugal’s Algarve coast to Italy it was long agreed that this weekend’s event would be on Saturday and Sunday only to allow a little more preparatory time. There would also only be a single 90 minute practice session on the Saturday morning instead of the usual three Friday/Saturday practice periods. Come that practice session it was Hamilton who went fastest in his black Mercedes ahead of Max Verstappen’s Red Bull and Valtteri Bottas in the other Mercedes as the drivers quickly acquainted themselves with the sweeps, climbs and curves of the old school but still magnificent track. 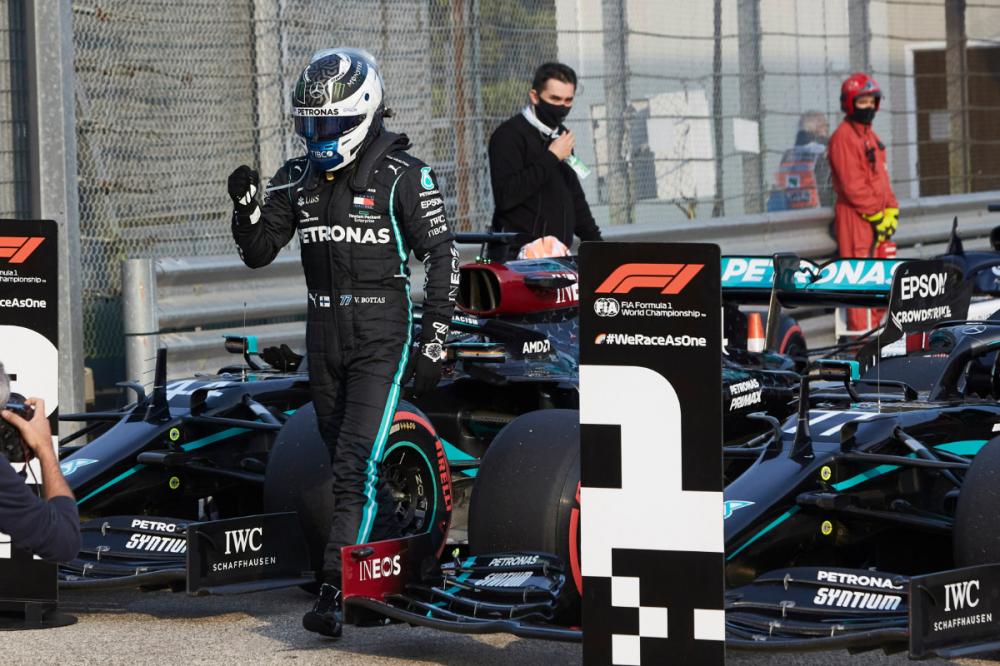 Valtteri Bottas claimed pole position, but had to settle for second place in the race
Verstappen later had a scare in the second part of qualifying as he reported a loss of power and the Red Bull crew worked wonders to cure the electrical problem by replacing a malfunctioning spark plug with amazing speed and getting the Dutch charger back out onto the circuit. Come the closing moments of the crucial final qualifying period it was Bottas who sneaked pole position from Hamilton as the ultra-dominant Mercedes outfit achieved a 74th front row lockout. Verstappen was the best of the rest, if over half a second slower than Bottas but ahead of an excellent fourth placed Gasly.

There had been a plan to allow 13,000 fans to attend the Grand Prix, but the worsening coronavirus situation in Italy forced the authorities to cancel this and so the sport returned to performing in front of empty grandstands. Perhaps less of a problem with Hamilton predicting after qualifying that it would be “a boring race” the following day.

Nevertheless, we could but hope for better as the grid formed this afternoon for the 13.10 local time start. Bottas, Hamilton and Verstappen held a strategic advantage by having medium specification tyres for their opening stints whereas the remainder of the top ten were on the grippier but less durable soft alternative and when the red lights went out Bottas sprinted into an early lead as Verstappen swept past Hamilton to second at the opening Tamburello chicane.

There was heartbreak though for AlphaTauri’s fifth placed Gasly, who had to retire on the eighth tour due to a coolant leak, whereas the leading trio simply continued to extend their advantage over the rest of the field. Verstappen was the first to pit on lap 19, switching to hard tyres and immediately followed by Bottas who did likewise. This left Hamilton out front as Mercedes opted to delay his stop and his Finnish team-mate received the news that he had suffered floor damage after driving over some debris on the second tour. This led to Bottas holding up Verstappen whilst there was some excellent midfield battling to their rear. 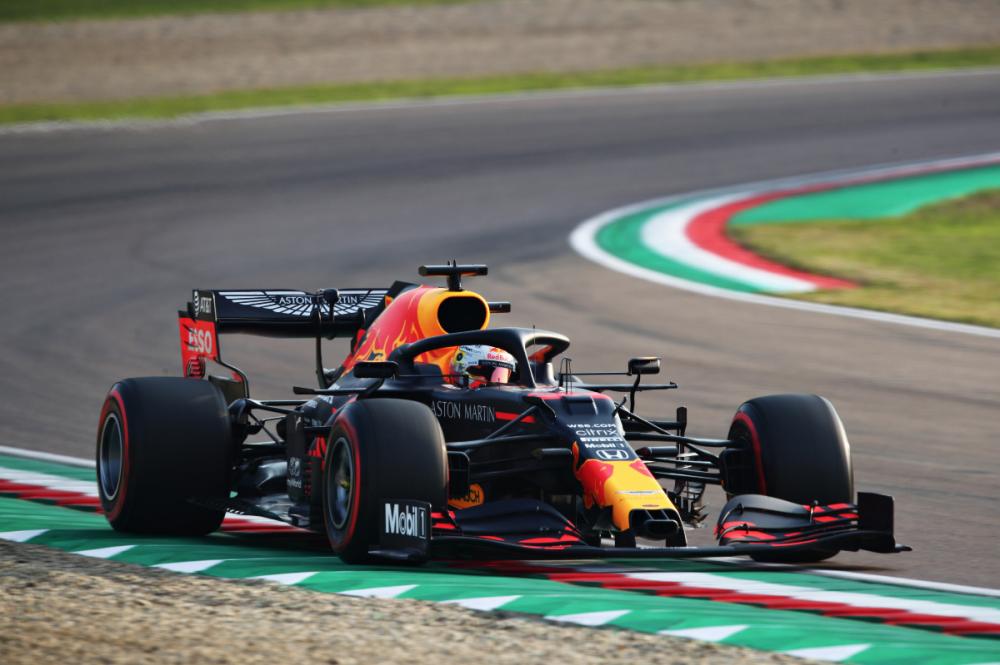 Max Verstappen was set to be the runnner-up until a sudden tyre failure ruined his day
The pattern of the race was changed significantly on lap 30 when Esteban Ocon had to retire his Renault trackside with a clutch problem and a Virtual Safety Car period to assist its safe recovery proved to be an absolute gift to Hamilton as the championship leader was able to pit and rejoin the circuit in a comfortable lead ahead of both Bottas and Verstappen. The latter knew he had little chance of catching the new leader, but persisted in his afternoon long pursuit of Bottas and it paid dividends on lap 43 when he usurped his rival as they approached the first chicane.

There was high drama though just eight tours later when a sudden right rear tyre failure pitched the Red Bull driver into a gravel trap and out of the race, with the Safety Car having to intervene for his car to be removed from the firing line. This prompted a flurry of further pit stops, including for Bottas and Hamilton as they changed to soft rubber for the closing laps.

Williams’ Russell is truly gifted, but he will long rue his embarrassing gaffe whilst circulating at relatively low speed immediately behind the Safety Car when he spun up his rear tyres to put heat into them, but only succeeded in pitching his car into the barriers and out of a Grand Prix at which he may well have scored his first ever points. The highly likeable 22 year old from Kings Lynn was understandably gutted.

When the Safety Car returned to its pit lane home we were left with a frenetic six lap sprint to the chequered flag, with Hamilton and Bottas out front and a delighted Daniel Ricciardo claiming a second podium finish in three races for his Renault team. A spirited late effort by AlphaTauri’s under threat Kvyat rewarded the Russian driver with a fine fourth place ahead of Charles Leclerc and Perez as the victorious Hamilton picked up the extra point for the fastest lap. Sadly Albon’s lowly 15th place finish may just have sealed his departure from Red Bull at the end of the season, if this decision hadn’t already been made in private by the team’s management after a string of poor races for the British/Thai driver. 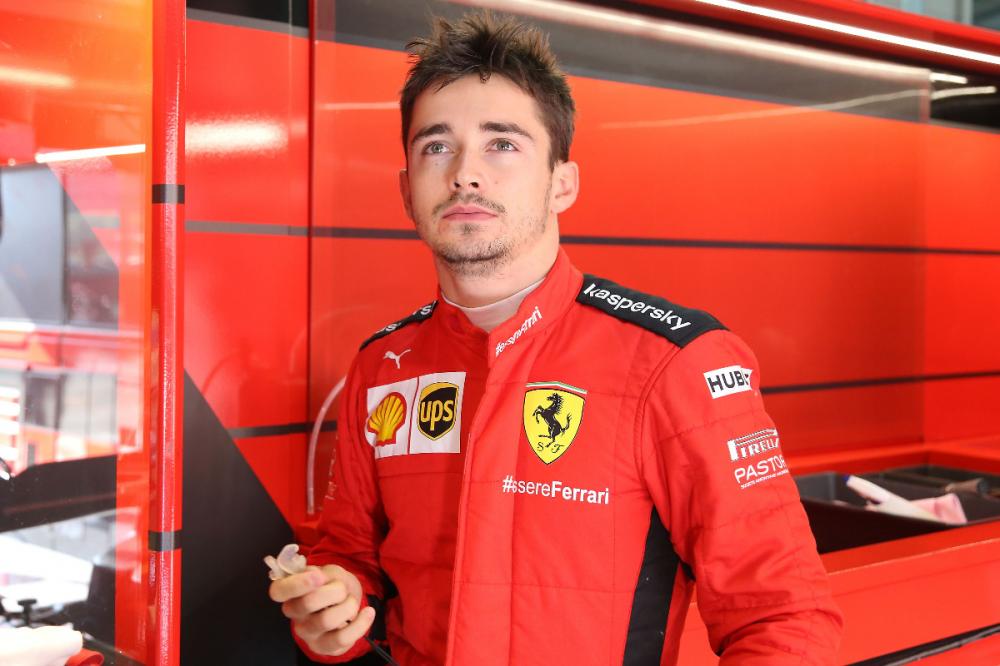 Charles Leclerc can only look skyward hoping for a more competitive Ferrari
This year’s much rearranged Formula 1 season is set to continue in a fortnight’s time with a return visit to Istanbul for the Turkish Grand Prix, an event held last in 2011. With the coronavirus pandemic sadly again increasing its prevalence in many countries it remains to be seen if the four remaining races in Turkey, Bahrain (twice) and Abu Dhabi still happen, but let’s hope so and more importantly that the world can again become a safer place.