Image by MLbay from Pixabay
Hippos, walruses and killer whales are just some of the ivory-bearing species that could be afforded greater protections under new proposals being consulted on by the Government.


As laid out in the Action Plan for Animal Welfare, the proposals would see the UK’s landmark Ivory Act, which will bring in a near-total ban on the import, export and dealing of items containing elephant ivory in the UK when it comes into effect, extended to other ivory-bearing species.

Elephants are not the only species targeted for their ivory - other endangered or near-threatened species such as hippo also face threats from poaching. Hunting practices also contribute to the trade in ivory, with killer whales and sperm whales targeted for their teeth, as well as narwhals and walruses for their tusks.

Hippos are defined as vulnerable by the International Union for the Conservation of Nature (IUCN), with a population less than 130,000 estimated to be left in the wild. Their sedentary nature coupled with their dependence on water makes them easier to hunt and more susceptible to poaching. Hippos are now the most at-threat species from the trade in ivory after the elephant as they are found in the same geographic area, and the infrastructure, trade routes and networks are already in place to support the illegal trade. 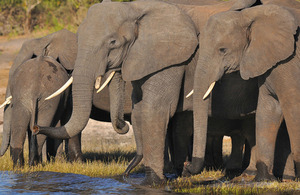 Arctic species such as walrus and narwhals face pressures from climate change which further makes the trade in ivory from these species unsustainable. Accurate population estimates for narwhals are difficult but it is thought that are only 75,000 narwhals alive in the wild. Their tusks have long been a subject of fascination - they can grow as long as 10 feet and are thought to have sensory capabilities, with up to 10 million nerve endings inside.

The Government is dedicated to fighting the threat of species extinction and is now seeking public, industry and stakeholder views on options to extend restrictions as a way to further protect these other ivory-bearing species.

Launching the consultation, International Environment Minister Lord Goldsmith said:
"The Ivory Act is one of the toughest bans of its kind in the world and sends a clear message that we are doing all that we can to save elephants from the threat of extinction. However the ivory trade is a conservation threat for other magnificent species such as the hippo, narwhal and walrus that are at threat. So I urge everyone to share their views to help ensure we can protect more animals from the grim ivory trade."

Informed by the evidence gathered in the call for evidence on the trade in other species, the consultation asks for responses on allowing the ban to be extended to other, non-elephant ivory-bearing species.

The responses to the consultation alongside the call for evidence will inform future government policy on the issue. Any changes to restrictions on the trade in non-elephant ivory will be made following extensive consideration of the evidence and discussion with industry experts and stakeholders.

Dr Mark Jones, Head of Policy, Born Free Foundation said:
"Closing down elephant ivory markets is an essential step towards securing a future for elephants. However, by focussing only on the trade in elephant ivory, other ivory-bearing species could suffer as ivory traders and consumers turn to alternatives.

"Born Free welcomes Defra’s announcement of the consultation into these issues and will be calling for the UK’s Ivory Act to apply to all ivory-bearing species. By taking this step, the UK can send a clear signal to the rest of the world that killing animals to carve ornaments from their teeth is not acceptable in the 21st century."

The UK is at the forefront of international conservation efforts to protect endangered species and the Prime Minister has already announced a significant scaling up from 2021 of funding to tackle the Illegal Wildlife Trade, as part of the £220 million International Biodiversity Fund.

The consultation can be found here: https://consult.defra.gov.uk/communications/extending-the-ivory-act-to-other-species/]