Northern passengers to see real and tangible improvements across the network as soon as possible. 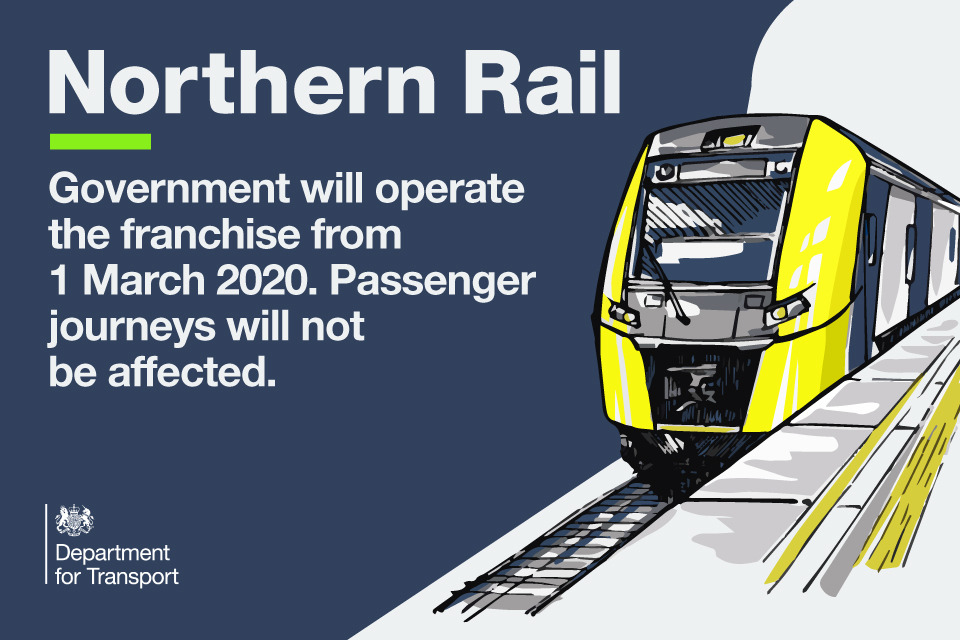 Transport Secretary Grant Shapps has announced that, from 1 March 2020, the government will take over running services on the Northern network.

The government recognises that the rail network in the north has fallen far short of delivering the service passengers need and deserve.

This comes after the Transport Secretary announced on 9 January that the Northern franchise was no longer financially sustainable and would only be able to continue for a small number of months.

"This is a new beginning for Northern, but it is only a beginning.

"Northern’s network is huge and complex and some of the things which are wrong are not going to be quick or easy to put right. But I am determined that Northern passengers see real and tangible improvements across the network as soon as possible.

"The railways were invented in the north. Last year the Prime Minister promised that we would give the railway back to the places it was born, giving more power over services, fares, and stations to local leaders.

"There will be no more leaving behind. This government is committed to levelling-up."

The government is committed to delivering real and tangible improvements across the network as quickly as possible, and will introduce a series of measures including;

introduce a number of electric trains from elsewhere on the network, boosting capacity for commuters into Manchester and Leeds
lengthening platforms at 30 stations by the spring, in addition to the 30 already completed, to allow longer trains to run
all existing trains will be deep-cleaned and the approach to cleaning reviewed to ensure passengers experience the service they deserve from the first train to the last
we will build on the recent agreement with ASLEF and improve the reliability of Sunday services

The government also recognises the scale of the challenge ahead. The Northern network is huge and complex – serving over 108 million passenger journeys a year on 2800 daily services, calling at 528 stations.


Today’s decision represents a step towards delivering a railway focused on the needs of its passengers.
To ensure a new vision for the railway is put in place the Transport Secretary has asked Robin Gisby and Richard George, who lead the public-sector operator, to prepare a plan in their first 100 days.

This will be a top to bottom review of everything from operational management, to rostering patterns and, most critically, customer experience, to make sure we leave no stone unturned in improving this franchise for passengers.

It will also include setting up a cross-industry task force to deliver recommendations for improving capacity and performance.

Many of Northern’s problems are infrastructure-related. The Transport Secretary has instructed the leadership of the public-sector operator to sit down with Network Rail and build a comprehensive new masterplan to review congestion around Manchester.

Continuing to assess the Castlefield Corridor, as well as key junctions and interactions across the wider network to develop a series of interventions which will actually deliver the improvements required. Further interventions around Leeds will also be considered.

The government is also reiterating that today’s decision in no way reflects on the staff of Northern. They are dedicated, hard-working and committed to their customers. The government wants to provide reassurance that this decision will not affect jobs or introduce changes to fares or tickets for passengers.

The Prime Minister has been clear that this government is committed to providing the north with a greater say in the running of its railway, with local leaders having more power over local services, timetables, fares and stations.

Today’s decision represents a step towards that and delivering a railway focused on the needs of its passengers.