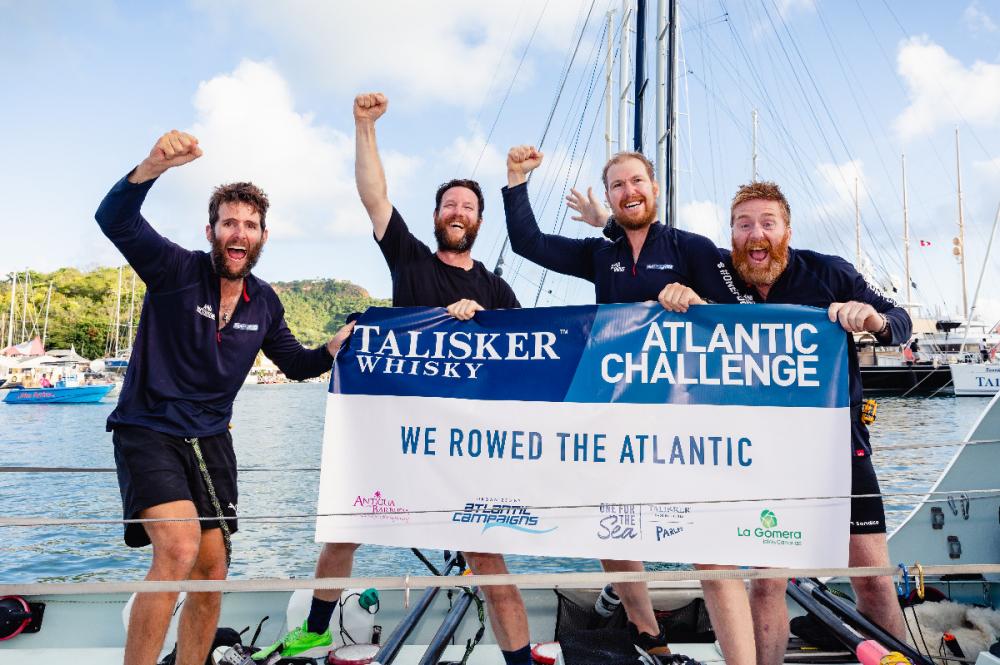 credit Atlantic Campaigns - Penny Bird
A group of four British friends arrived at Nelson’s Dockyard in Antigua after leaving their hectic lives on dry land behind to connect with nature, completing this year’s Talisker Whisky Atlantic Challenge, whilst raising awareness and funds to help support the protection and preservation of sea forests with environmental organization Parley for the Oceans.

Without the ocean, there is no life.
Ed Smith, Rob Murray, Adam Green and Jack Biss, from team Anna Victorious, landed on dry land after spending 37 days, 8 hours and 58 minutes at sea after leaving La Gomera, Spain on 12th December.

The team were rowing for One For The Sea, an initiative launched by Scotch whisky brand, Talisker, to raise awareness and funds for Parley’s work to help support the protection and preservation of 100 million square metres of sea forest by 2023. 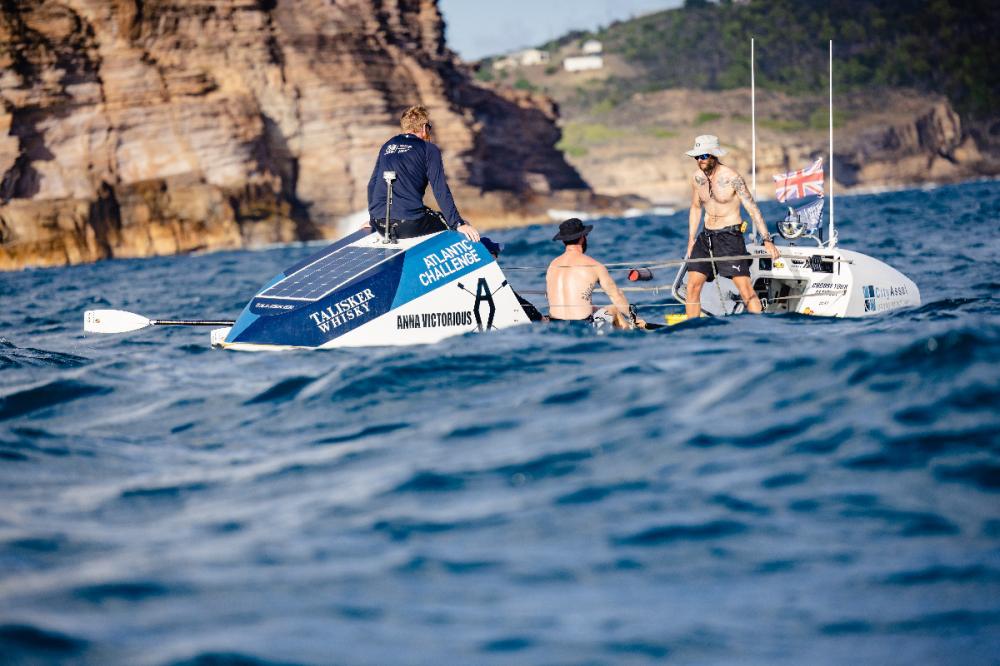 credit Atlantic Campaigns - Penny Bird
The 3,000 mile crossing saw the team spend all their time in a 28ft rowing boat, rowing in shifts of 2 hours on and 2 hours off. They spent both Christmas and New Year at sea and consumed up to 6,000 calories per day. This year’s variable weather conditions meant Anna Victorious faced weeks of no wind and flat water creating very tough rowing through to huge swells achieving speeds of 10.9 knots.

Despite this and the gruelling demands of the race, the team were able to keep spirits high with incredible sightings of wildlife from dolphins, to whales, to crystal clear waters and stunning sunsets.

We focused on the positive things in each day, savouring the experience,
The team was up against stiff competition with a fleet of 36 international teams – including five-person, all-female and solo crews – from countries including the Netherlands, the United States of America and Great Britain – taking on the race after years of preparation.

Lieke Hompes, Global Head of Marketing Talisker, said:
“Congratulations to Anna Victorious on their incredibly inspiring achievement. As a whisky made on the shores of the Isle of Skye in Scotland, we have a personal connection with the power and beauty of the ocean. We are thrilled they have joined us on our mission and dedicated their row to help us protect and preserve the ocean for future generations.”

To date, the Talisker x Parley collaboration has helped to conserve 40 million square metres of such marine ecosystems.


Edward Smith from team Anna Victorious, said:
“The Talisker and Parley partnership is amazing – together they are trying to help preserve 100 million square metres of sea forest by 2023. For the past 37 days, we have been alone – just the four of us and the ocean – and it really makes you realise just the importance of the ocean for human life. Without the ocean, there is no life. It is vitally important that we protect it for everyone, and in particular, for our future generations.”

Rob Murray, from team Anna Victorious, said:
“Being away from modern life felt wonderful – to be away from our hectic lives and reconnect with nature – then, after about a week, the pain of missing family and loved ones really hit. That’s what motivated us to get to Antigua and get back to our families.

“The wildlife was also amazing – we saw whales, dolphins, tuna, marlin – one of the flying fish even hit one of the team in the face! On a clear night we would look up at the stars and know that they were the same stars that our family were seeing back home, and that was really special. On some days we saw the moon rise and set on the same day. One day we saw the moon and a rainbow sitting side by side – it really was the most extraordinary experience, one we’ll never have again.

“Out there, it was two hours rowing and two hours off – working together like that as a team was what helped us to get across. We focused on the positive things in each day, savouring the experience, to keep each other motivated and spirits high. Being back on land now doesn’t feel real – it still feels like we should be getting back on the ocean to row!” 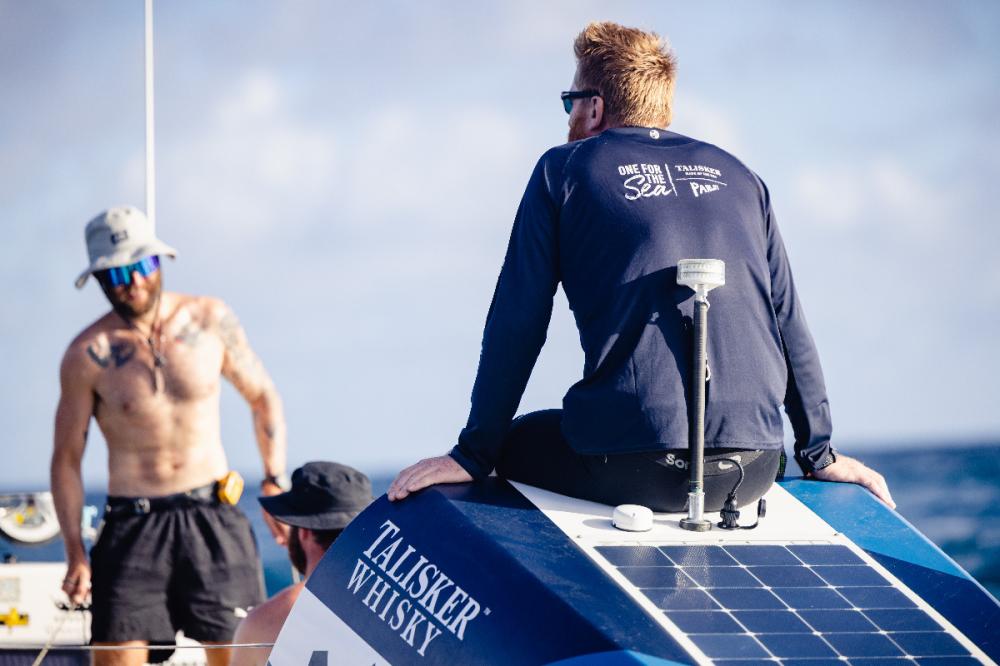 credit Atlantic Campaigns - Penny Bird
Carsten Heron Olsen, CEO of Atlantic Campaigns, said:
“Every year we are amazed by the grit and determination shown by teams that take on the Talisker Whisky Atlantic Challenge and this year is no different. Anna Victorious have shown incredible strength and endurance. We know that this race challenges you, but it also gifts you with some incredible experiences and we hope those are the memories that will live with them forever. On behalf of Atlantic Campaigns congratulations on your achievement!"