Dreamgirls – The Stuff That Dreams Are Made Of…. 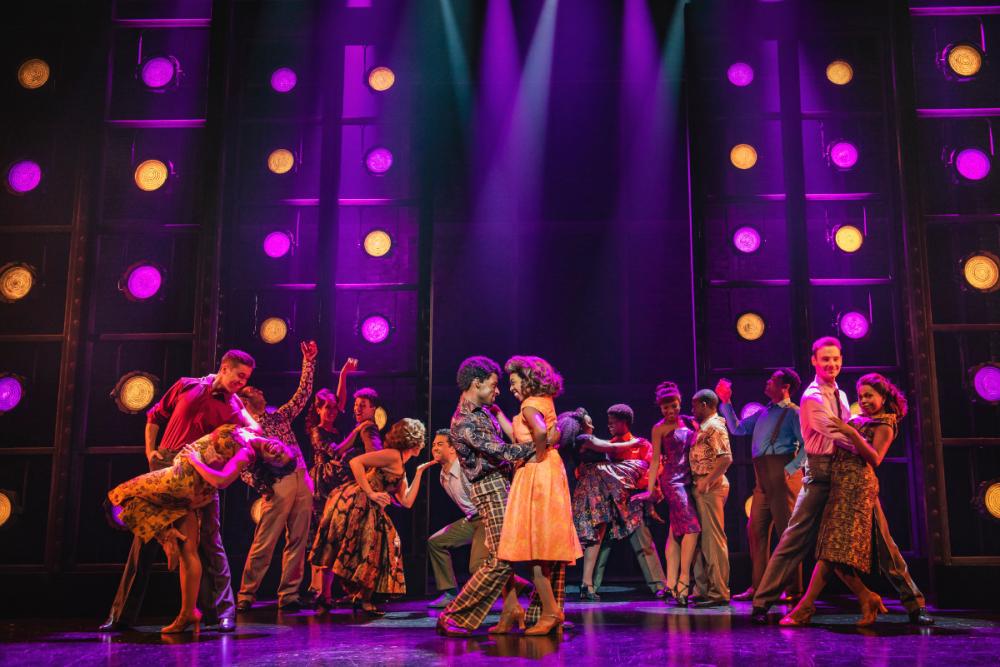 photo Matt Crockett
From the opening swish of a lime-green, sequinned fishtail skirt via the megawatt smiles of an ambitious girl group the Dreamettes, to the sharp, shiny suit of their manager, a former car salesman, Dreamgirls is a musical full of glitter and sparkle.

The show is less about the grit, grind and sweat of the struggle to get to the top, but more of an entertaining showbiz rollercoaster ride in which each move the Dreamettes make has been plotted by their manipulative manager Curtis Taylor Jr, (Dom Hartley-Harris).

With a passing nod to the rise of Diana Ross and the Supremes, The Dreamettes are a young trio of friends hoping to sing their way to stardom, but when the group’s manager replaces the talented lead singer, Effie (Nicole Raquel Dennis of The Voice fame) with the attractive and appealing Deena (Natalie Kassanga), the group’s changing dynamics inevitably test their friendships to the limit.

The three girls each develop into powerful independent women as their success grows and this is perfectly reflected in both the costumes and sets, designed by Tim Hatley.

The staging follows the same evolution, being unsophisticated at the beginning of the show but which slowly and surely becomes ever more glamourous and glitzier, especially for the big musical numbers.

Whilst the entire cast are brilliant, without doubt Nicole Raquel Dennis is the star of the show. Her powerful voice had the audience on its feet as she neatly wrapped up Act 1 with probably the most well known of the songs ‘And I’m Telling You I’m Not Going’.

Deena Jones (Natalie Kassanga) and Lorrell Robinson (Paige Peddie) also possessed exceptionally strong voices and pleasingly each had the opportunity to demonstrate their impressive vocal range and ability with solo numbers. The trio really were well matched both in terms of their vocal and dance abilities, making a great cohesive team.

A special mention must go to Brandon Lee Sears, who took the part of Jimmy, Lorrell’s love interest. Even after seven years, he still found himself unable to commit to her but, it has to be said, he was super flexible and energetic, had some amazing dance moves and easily brought laughter to the audience with his comic timing and facial expressions.

The show is fast moving and has great energy, the dance routines were both interesting and slick. All of the cast dazzled – not least due to the copious amounts of glitter and sequins on display.

If you love music of the sixties and seventies a la The Supremes and James Brown, don’t miss the opportunity to see this multi-award-winning West End production of Dreamgirls, but be sure to take your sunglasses

It's not a show to miss and you won’t regret buying your ticket.