Billesley’s Love Of The Bard! 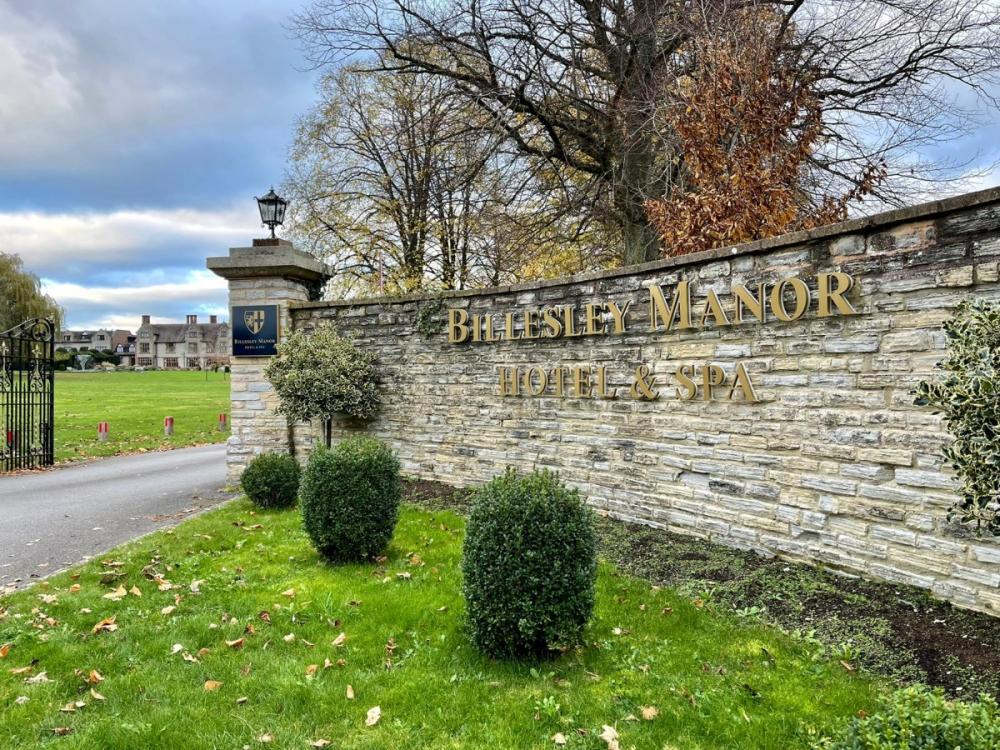 The ubiquitous William Shakespeare probably didn’t imagine during his lifetime, that he would have as big an impact on Warwickshire’s hospitality industry, as much as he would on world theatre!

But as any visitor to the medieval market town of Stratford-upon-Avon quickly discovers, there are a multitude of properties that lay claim to the Bard and his ‘rumoured’ visits, adding more than a little interest to what might just be another Elizabethan building!

Billesley Manor Hotel & Spa with its ‘As You Like It room’ 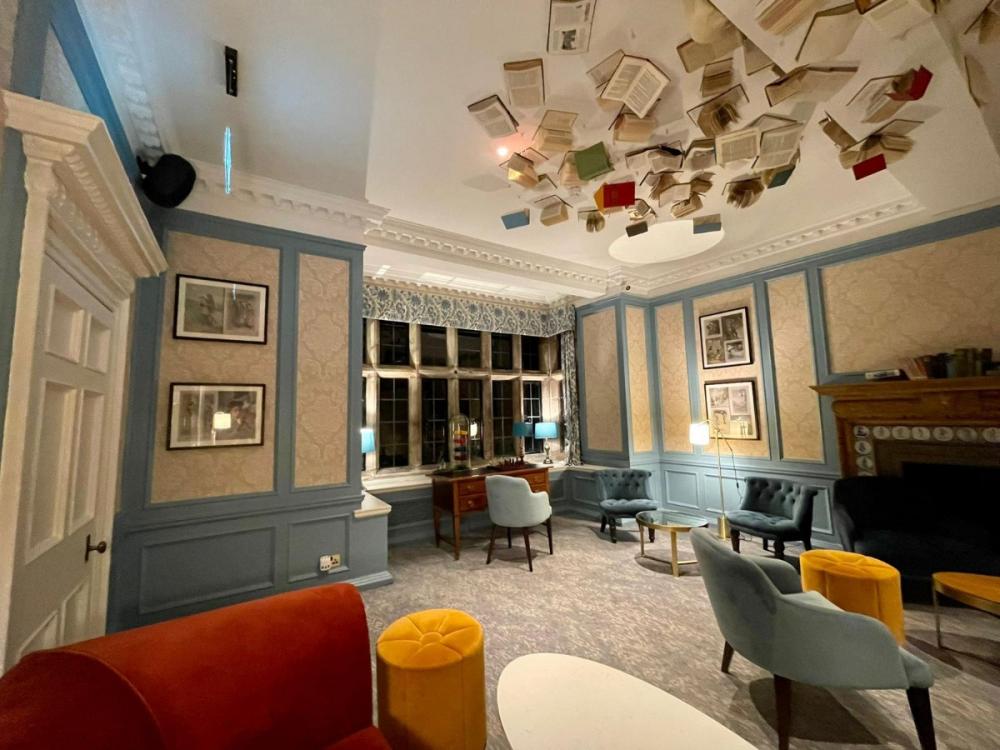 – where Mr Shakespeare is ‘rumoured’ to have written a few scenes of his romantic comedy play of the same name - is one such place: and what a splendid property it is, with or without Will’s alleged connections!

Situated approximately four miles outside the town centre in several acres of sprawling countryside, the property has more tales than most bearing in mind that it is several centuries old and, if walls could talk, would probably regale folk more effectively than Boris at an after dinner gathering. 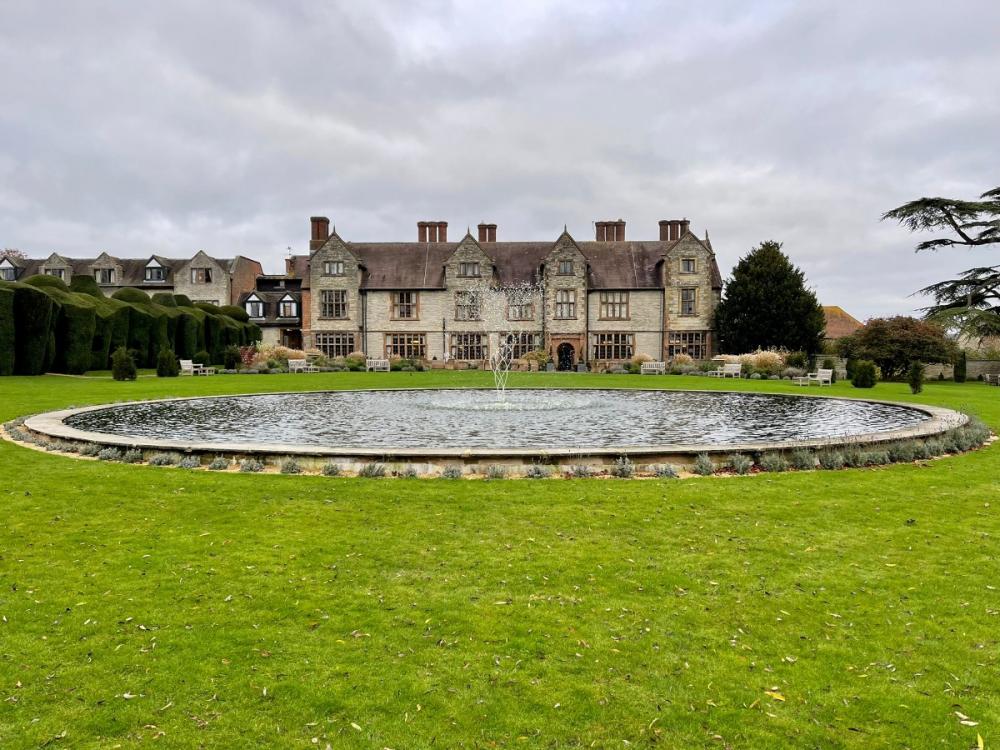 Boasting 71 rooms and a £5.6m refurb which completed in August 2020, this spectacular building with its dark oak panelling and overwhelming sense of history, sits in the shadow of All Saints Church, located in the grounds and is ‘believed’ to have been the place of worship where William and his bride, Anne Hathaway, tied the knot on November 28th 1582.

But was it? The evidence is ‘circumstantial’ although ‘persuasive’ and ‘compelling’….at least that’s what is says in the hotel’s historical booklet, but it’s enough to warrant a steady flow of customers including not only the literary curious, but also spa aficionados looking for a restful weekend away from the humdrum of daily life.

These days the hotel, which has a historical pedigree way too long for these pages, caters to modern requirements. A slight contradiction perhaps but true in that it has upgraded its offering to achieve wider appeal with all the comforts of a newer build, whilst holding on firmly to a heritage that only a fool would throw out with the bathwater! 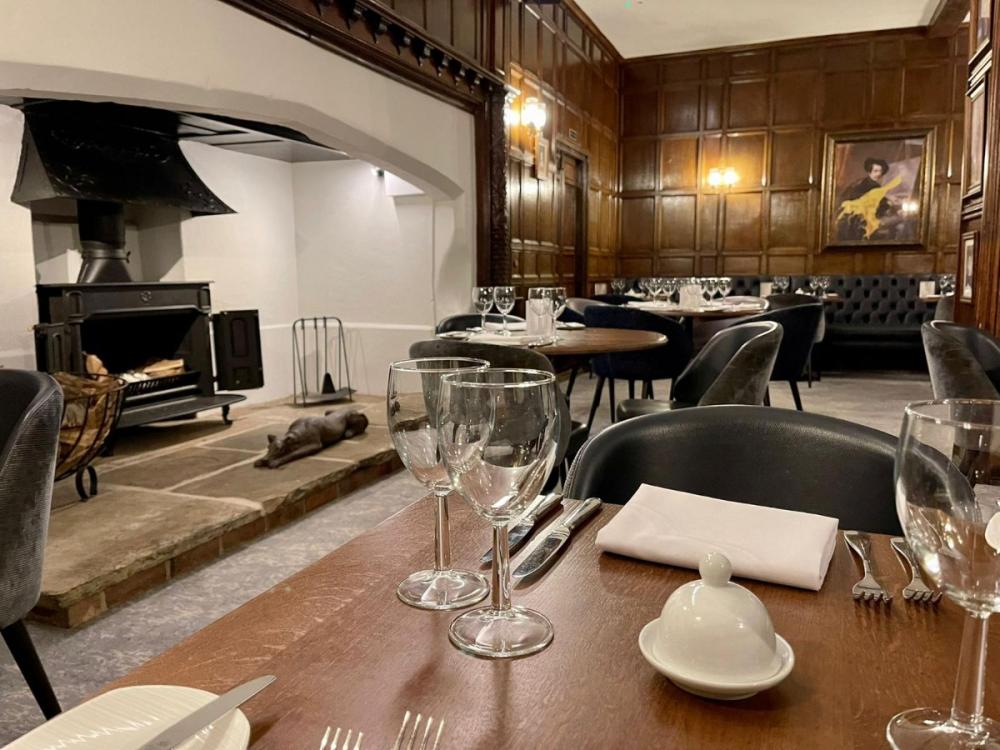 The Stuart Room – it is in fact two adjacent rooms separated by a hallway used, in part, as a self- service breakfast area each morning - is an aesthetically beautiful dining area that traditionalists may raise an eyebrow at if the panelled walls – or the paintings mounted thereon – catch their eye.

Not quite street artist Banksy, but someone has taken a series of traditional Elizabethan portraits and given them a modern makeover with splodges of primary colours designed to lift the darkness of the room’s 16th century oak panelling. 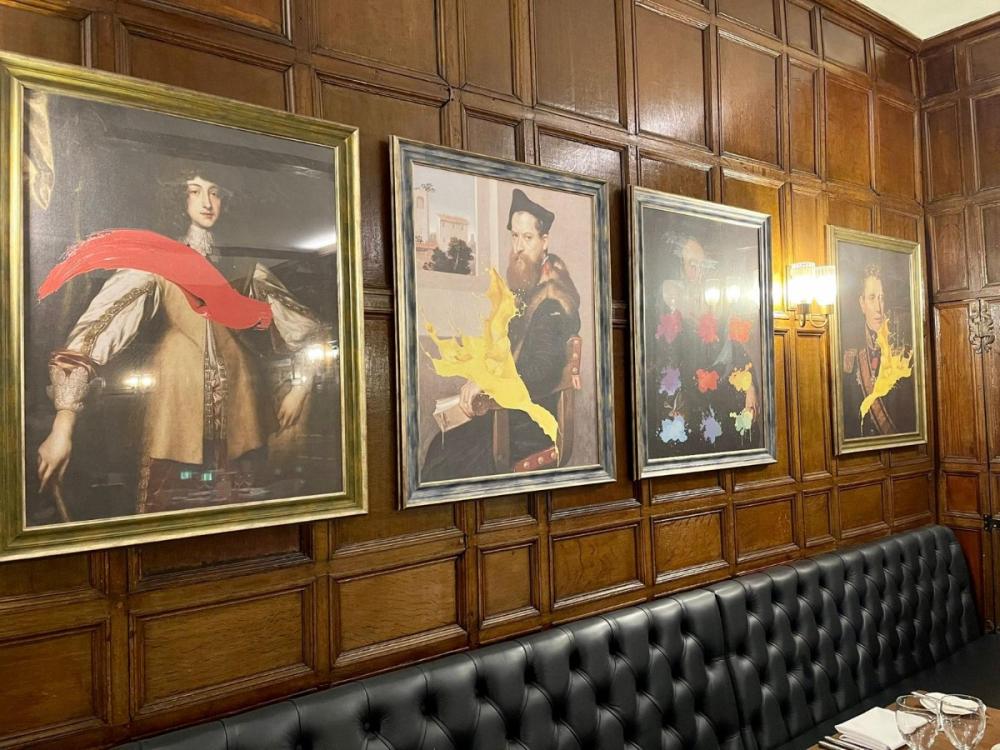 But, then again, Shakespeare wouldn’t have had a spa, gym or yoga hut during his visit, although, in fairness, the latter does have a thatched roof even if spandex or running pants may also be a more modern requirement for those keen to take full advantage!
“Wow, it’s beautiful.”

My wife’s reaction as we drove through the hotel’s main gates and down the long drive to the car park, were honest and, if life gives each of us a single chance to make a first impression, then Billesley Manor Hotel & Spa has a slight head start because of its historical pedigree.

This isn’t mock Elizabethan: it’s the Real McCoy and worthy of any intake of breath!

The grounds are manicured and sprawling and in the middle of the main lawn there is a playing fountain adjacent to the topiary gardens, themed around the Alice in Wonderland chess set. 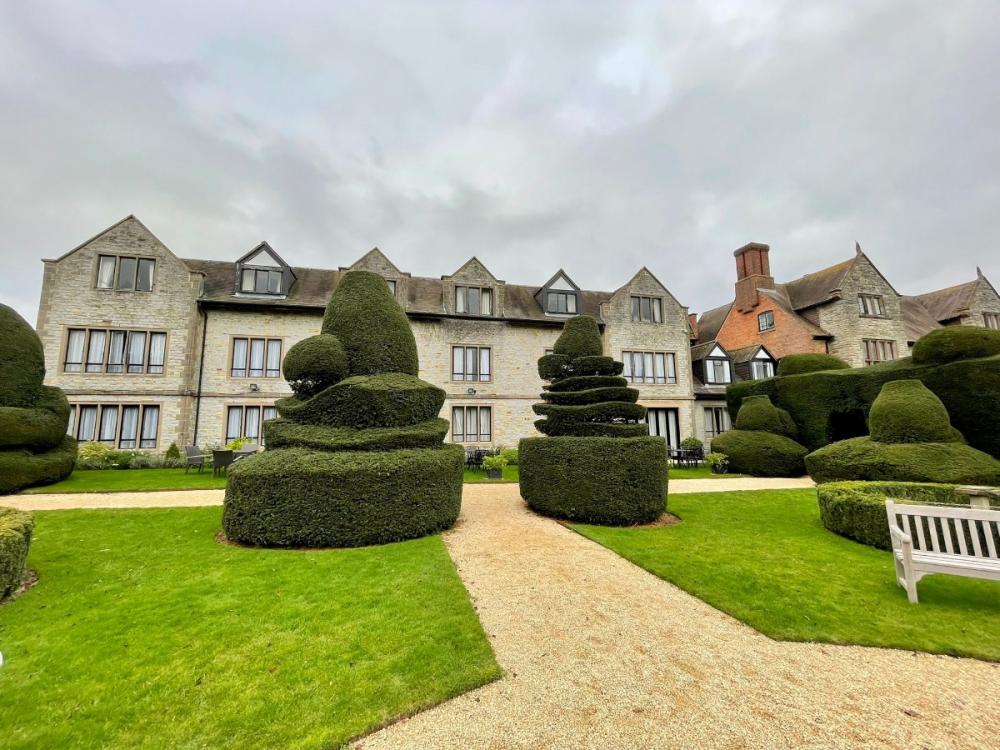 “Don’t worry, the fountain is turned off at night so it won’t keep you awake,” we were assured: no double glazing in a listed building, I mused, but still, as warm as toast inside our modern, well- appointed room. 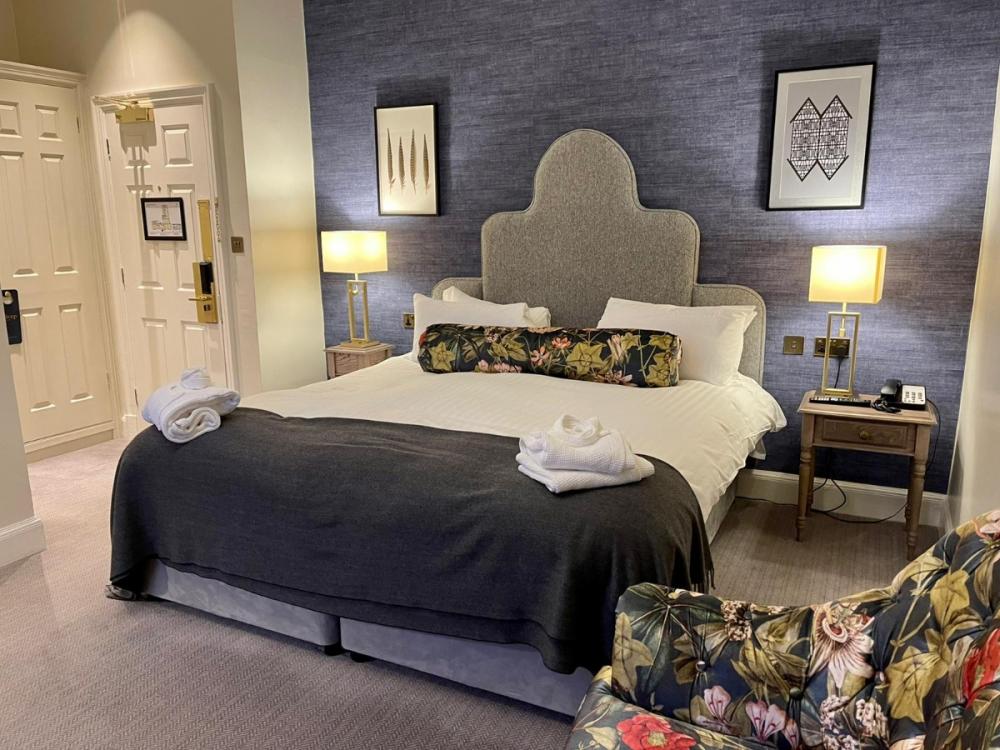 There were towel dressing gowns for use with the spa, but no slippers so make sure you take something for use on your feet. But, everything else was there 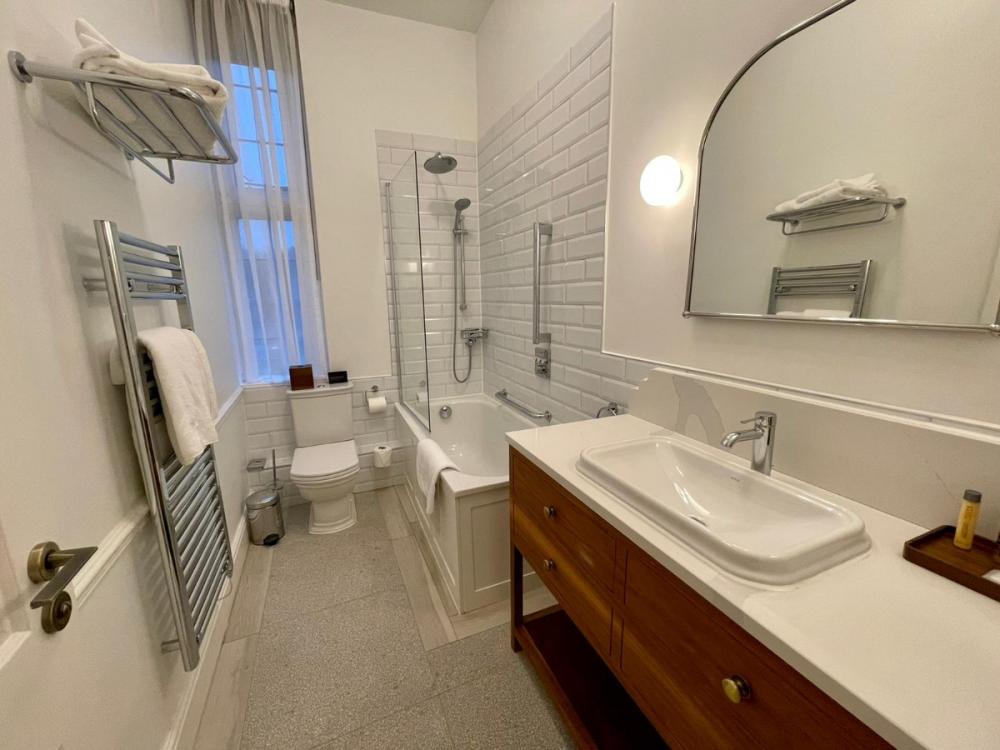 including room service, tv, a comfortable bed, excellent shower and, of course, a great view straight on to the lawned area, so often used by couples tying the knot or, indeed, giving a display of marital fireworks to their guests! 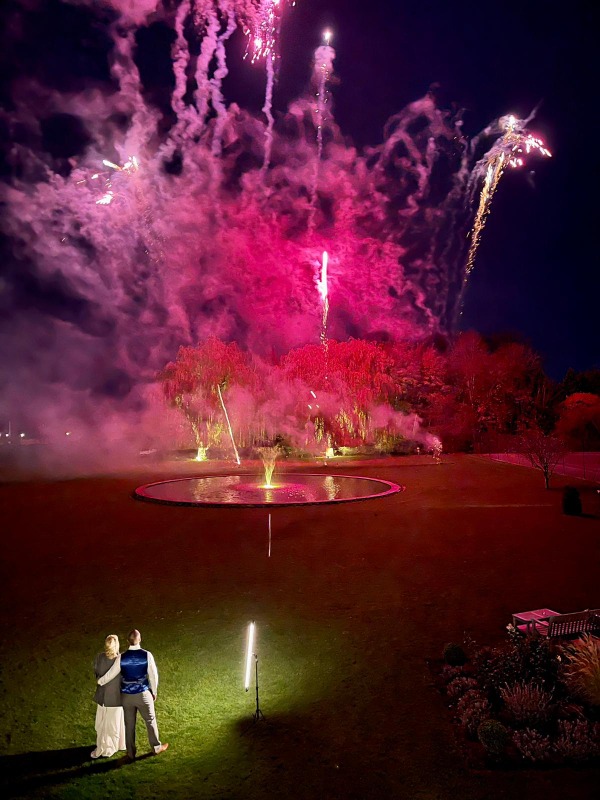 The first floor minstrels’ gallery overlooks the Great Hall Bar and relaxed seating area, which also doubles as the ‘Full English’ serving area each morning, but a convivial ‘chatting’ and relaxing zone at other points of the day. 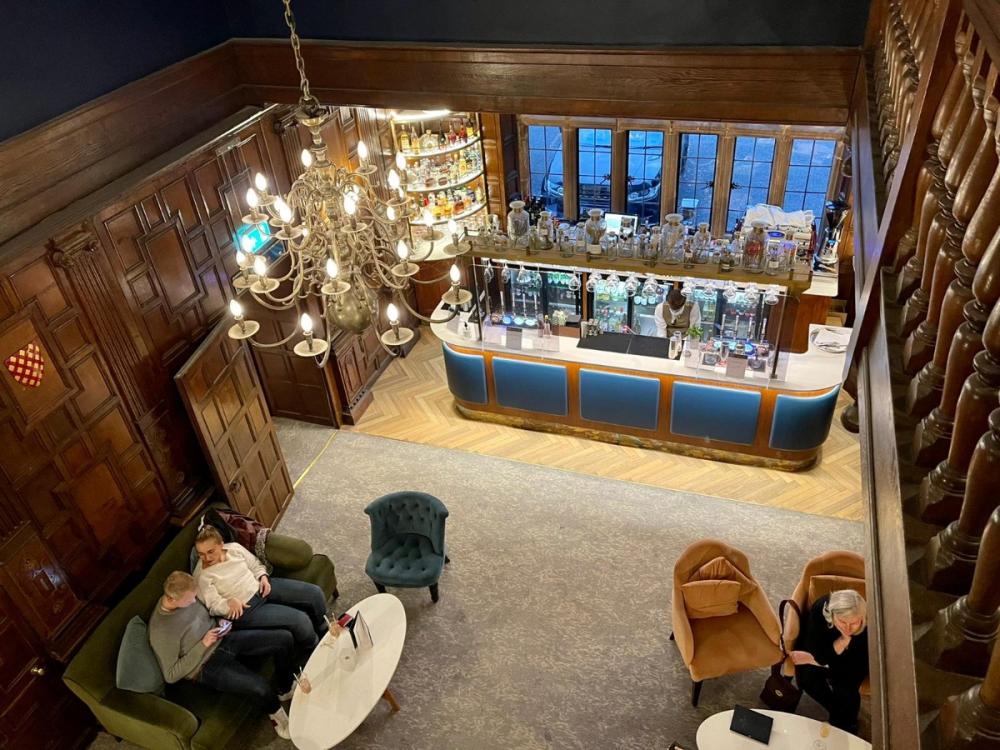 And that has to be one of the hotel’s appeals: lots of attractive seating areas. There’s not only the bar, but also the main reception area – more a long 'hall' than a simple counter - with seating and plenty to keep the eye engaged. 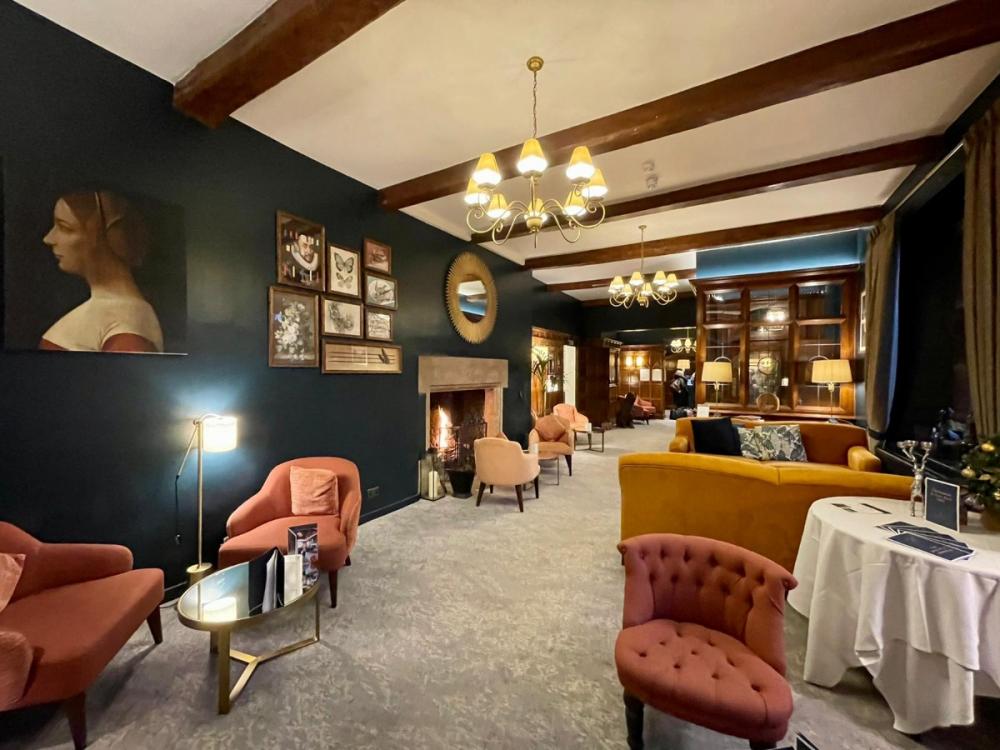 Reception at the far end!

There’s a drawing room – often used for afternoon tea or private dining – and, of course, not forgetting Mr Shakespeare’s As You Like It room, beautifully dressed with its ceiling of open books.

This dog-friendly hotel is ideal for couple’s in search of a romantic weekend, with bed and breakfast starting at £160 per night based on two people sharing, and ‘packages’ from £210.

If I had one slight reservation it was the quality of the food which was satisfactory but not, in my opinion, fully supportive of the hotel’s four-star rating. Ironically the service was excellent and the Maître D’, Stefan was superb and a total pro, remembering everyone’s names seamlessly. 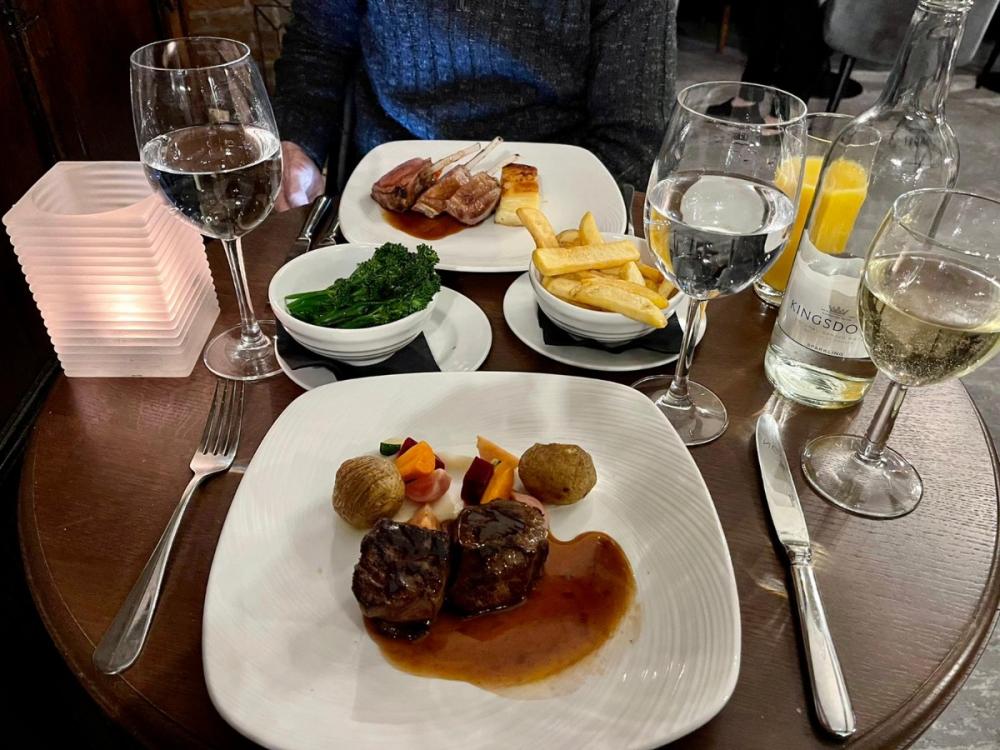 Another slight push in the kitchens and Billesley Manor will have a holistic offering that is well worth the six hour round trip from Leeds to Warwickshire. And the acid test? 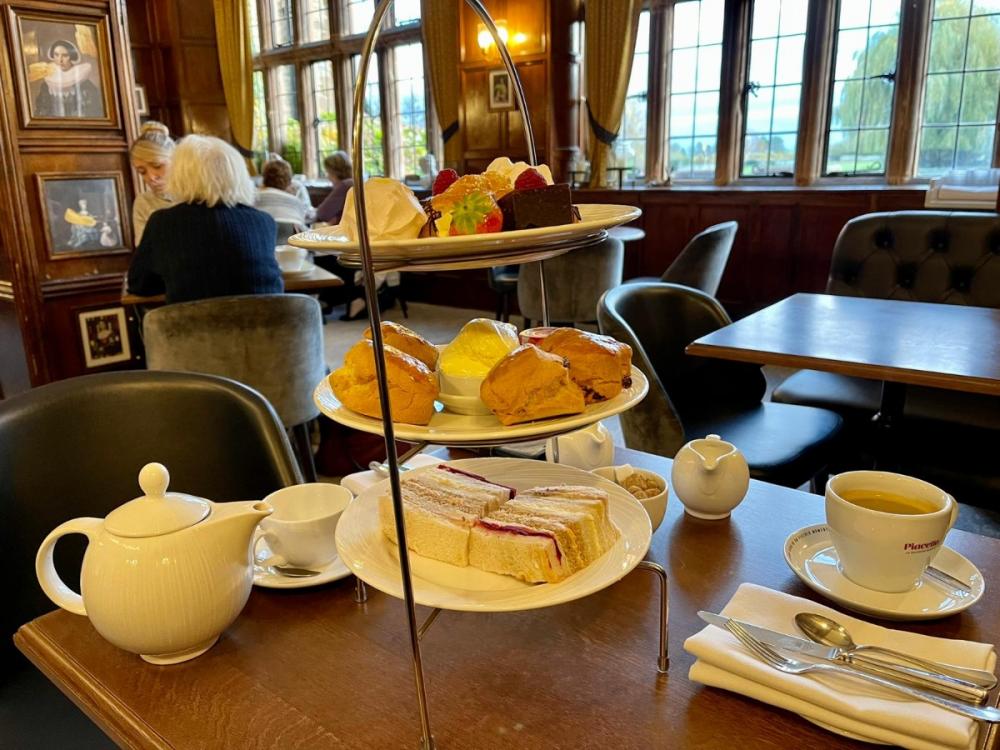 Would I go again? Yes but, in doing so, I’d hope that the afternoon tea sandwiches, evening dinner ‘hand cut chips’ and roasted potatoes were served with a little more finesse to complement the stunning backdrop and friendly staff who, in fairness, couldn’t do enough.

All quoted rates subject to availability.