After the sea of orange clad Max Verstappen fans at Zandvoort just days ago this weekend we witnessed plenty of Ferrari red at the iconic Monza circuit near Milan in northern Italy. The victory silverware was earned in yesterday’s Sprint race by Mercedes’ Valtteri Bottas and today the Grand Prix featured a 1-2 finish for McLaren and a highly controversial collision between Sir Lewis Hamilton and Verstappen which ended their races. 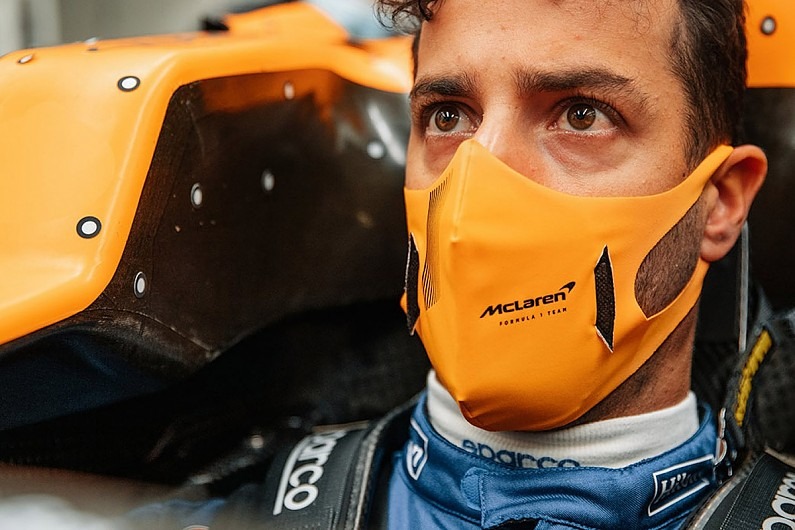 McLaren’s Daniel Ricciardo was delighted to win today after finishing third yesterday
The two worst kept secrets in Formula 1 (that George Russell will replace Bottas at Mercedes next year, with the Finn moving to Alfa Romeo) had been publicly confirmed in the days leading up to the Italian Grand Prix weekend and Williams had also announced that Red Bull’s current reserve and test driver Alex Albon will partner the retained Nicholas Latifi for them next season. This just left Alfa Romeo still to unveil who will race alongside Bottas in 2022, with the current incumbent Antonio Giovinazzi in danger of being replaced by the 22 year old Chinese Formula 2 racer Guanyu Zhou.

As such, with everyone assembled at the iconic Monza circuit near Milan, long known as The Temple of Speed, it was very much time for everyone to focus on events ontrack. This was particularly the case with the thrilling battle between title rivals Verstappen and Hamilton set to resume and with only three points separating the battling duo. All was still not well in the Alfa Romeo camp though with Kimi Räikkönen having tested positive for Covid-19 a week earlier at Zandvoort and having had to return to his family home in Switzerland. As a result Robert Kubica was set to again be the Finn’s replacement in Italy.

1 Daniel Ricciardo (McLaren) 1hr21m54.365s
2 Lando Norris (McLaren) +1.747s
3 Valtteri Bottas (Mercedes) +4.921s
4 Charles Leclerc (Ferrari) +7.309s
5 Sergio Pérez (Red Bull) +8.723s
6 Carlos Sainz (Ferrari) +10.535s
7 Lance Stroll (Aston Martin) +15.804s
8 Fernando Alonso (Alpine) +17.201s
9 George Russell (Williams) +19.742s
10 Esteban Ocon (Alpine) +20.868s
11 Nicholas Latifi (Williams) +23.743s
12 Sebastian Vettel (Aston Martin) +24.621s
13 Antonio Giovinazzi (Alfa Romeo) +27.216s
14 Robert Kubica (Alfa Romeo) +29.769s
15 Mick Schumacher (Haas) +51.088s
16 Nikita Mazepin (Haas) Retired
17 Max Verstappen (Red Bull) Retired
18 Lewis Hamilton (Mercedes) Retired
19 Pierre Gasly (AlphaTauri) Retired
20 Yuki Tsunoda (AlphaTauri) Retired
Monza is all about very fast straights, tight chicanes and a sweeping 180 degree final corner and has typically featured a one stop strategy for most teams. Last year proved a little different though as a result of a Safety Car intervention and also a red flag stoppage and restart. It’s a 458 metre sprint from pole position down to the braking point for the first chicane, the third longest of the whole season, and that first right-left change of direction can favour the brave but punish the overly ambitious. Overtaking at Monza is usually a little easier than at many tracks and the key opportunities tend to be on the approach to Turn 1 and in the hard braking sector just before Turn 4, with any aerodynamic tow obtained from a car ahead of you worth upto 0.7s off your lap time. As a result it was expected that there might be issues again as teams and their drivers sought not to be at the front of any queue, punching a hole through the air to the benefit of those behind.


Aston Martin was keen to promote its links with the forthcoming new James Bond film “No Time To Die”
Knowing what has probably been James Bond’s most iconic company car over the years, the Aston Martin team was happy to amend its cars’ livery to help promote the new Bond film, “No Time To Die”, which is set to have its world premiere at London’s Royal Albert Hall later this month. Also, the Alfa Romeos sported revised paintwork in memory of the Italian driver Giuseppe Antonio “Nino” Farina, who became the first ever Formula 1 world champion after winning the Italian Grand Prix at Monza in an Alfa on 3rd September 1950, the last event that year in a calendar which featured just seven races.

After the inaugural Sprint event had been included in the British Grand Prix timetable at Silverstone back in July, Monza was scheduled as the second F1 weekend this year to do likewise. This meant that there would only be a single free practice session on Friday preceding a qualifying hour that teatime to set the grid for yesterday’s Sprint Qualifying as it was called, which was actually a race, but officially so named so as not to detract from today’s main event, the Grand Prix. A second free practice period would also take place at noon local time on Saturday before the Sprint race, the result of which would then be used to determine the starting grid for this afternoon’s blast through the Italian parkland circuit. Just in case that all seems a little convoluted, rest assured that discussions are already taking place about tweaking the rules relating to this extra 100km race for next season.

When the cars all took to the track for the first free practice session on Friday afternoon it was Hamilton‘s Mercedes which led the way, a comfortable 0.452s clear of Verstappen’s Red Bull as Bottas and Aston Martin’s Lance Stroll completed the fastest quartet. Ferrari failed to impress on home soil, with Carlos Sainz only seventh and Charles Leclerc down in eleventh place, leaving their passionate “tifosi” fans to hope for better as the weekend progressed. Monza though rewards outright power as well as slipstreaming and the former was the root cause of the Scuderia’s relative woes.

Come the Friday teatime qualifying for the following day’s Sprint race it was Bottas, so publicly dropped by Mercedes just days earlier, who went quickest with a blistering lap, as Hamilton, Verstappen and McLaren’s Lando Norris proved to be the best of the rest. Mercedes had opted to give the Finn a new power unit for this weekend and this meant that, although he would begin the Sprint event at the front, he would have to start the following day’s Grand Prix from the back of the grid.


Lando Norris showed maturity beyond his 21 years during a great weekend for McLaren
In yesterday’s second and final practice period Hamilton and Bottas led the way for Mercedes ahead of the Red Bulls of Verstappen and Sergio Pérez, but red flags paused the action after 26 minutes when Sainz crashed heavily at the Ascari chicane, leaving his Ferrari with significant frontal damage. At the beginning of the following 18 lap Sprint race Bottas, Verstappen and the pair of soft shod McLarens made excellent starts, whereas Hamilton made a slow getaway and quickly dropped down to fifth position. AlphaTauri’s Pierre Gasly tapped the rear of Daniel Ricciardo’s McLaren at the first chicane and soon left the fray at high speed due to front wing damage, bringing out the Safety Car. After racing resumed on lap four Bottas led Verstappen, Ricciardo, Norris, Hamilton and Leclerc to the chequered flag.

With the victorious Bottas set to start this afternoon’s 53 lap Grand Prix at the back, this left Verstappen and Ricciardo to occupy the front row on the grid, with Hamilton fourth, and the noise, colour and speed of the Italian Air Force display straight after the national anthem just added to the already brilliant pre-race atmosphere. When the red lights went out just minutes later it was Ricciardo who blasted past Verstappen into an immediate lead and Hamilton briefly got the better of Norris before dropping behind again. After a short Virtual Safety Car period following incidents involving Giovinazzi and Kubica the race settled into a pattern of Verstappen pursuing the leading Ricciardo and Hamilton applying pressure to third placed Norris, with the two Ferraris completing the leading sextet.

1 Valtteri Bottas (Mercedes) 27m54.078s
2 Max Verstappen (Red Bull) +2.325s
3 Daniel Ricciardo (McLaren) +14.534s
4 Lando Norris (McLaren) +18.835s
5 Lewis Hamilton (Mercedes) +20.011s
6 Charles Leclerc (Ferrari) +23.442s
7 Carlos Sainz (Ferrari) +27.952
8 Antonio Giovinazzi (Alfa Romeo) +31.089s
9 Sergio Pérez (Red Bull) +31.680s
10 Lance Stroll (Aston Martin) +38.671s
11 Fernando Alonso (Alpine) +39.795s
12 Sebastian Vettel (Aston Martin) +41.177s
13 Esteban Ocon (Alpine) +43.373s
14 Nicholas Latifi (Williams) +45.977s
15 George Russell (Williams) +46.821s
16 Yuki Tsunoda (AlphaTauri) +49.977s
17 Nikita Mazepin (Haas) +1m2.599s
18 Robert Kubica (Alfa Romeo) +1m5.096s
19 Mick Schumacher (Haas) +1m6.154s
20 Pierre Gasly (AlphaTauri) Retired
By lap 22 a flying Bottas had made his way upto eighth position and one tour later Ricciardo stopped to switch from medium specification tyres to hard ones. Red Bull responded by bringing Verstappen in just one lap later for the same change, but delays meant the stop lasted eleven seconds rather than around two and he rejoined the circuit down in tenth position. Soon Hamilton pitted too, albeit to switch from hard to medium rubber, and then came a pivotal moment on lap 26 as he and Verstappen collided at the first chicane, with the rear of the Red Bull coming to rest perched on the Mercedes after having been launched into the air on one of the sausage kerbs. Both their races were instantly over and, with an investigation due by the stewards after the Grand Prix, the arguments quickly began about which driver was to blame, with both accusing each other. This sort of race ending collision between the pair of championship rivals had seemed likely to happen all season and now it had. The stewards subsequently adjudicated that Verstappen was “predominantly to blame” and gave him a three-place grid penalty for the next race. 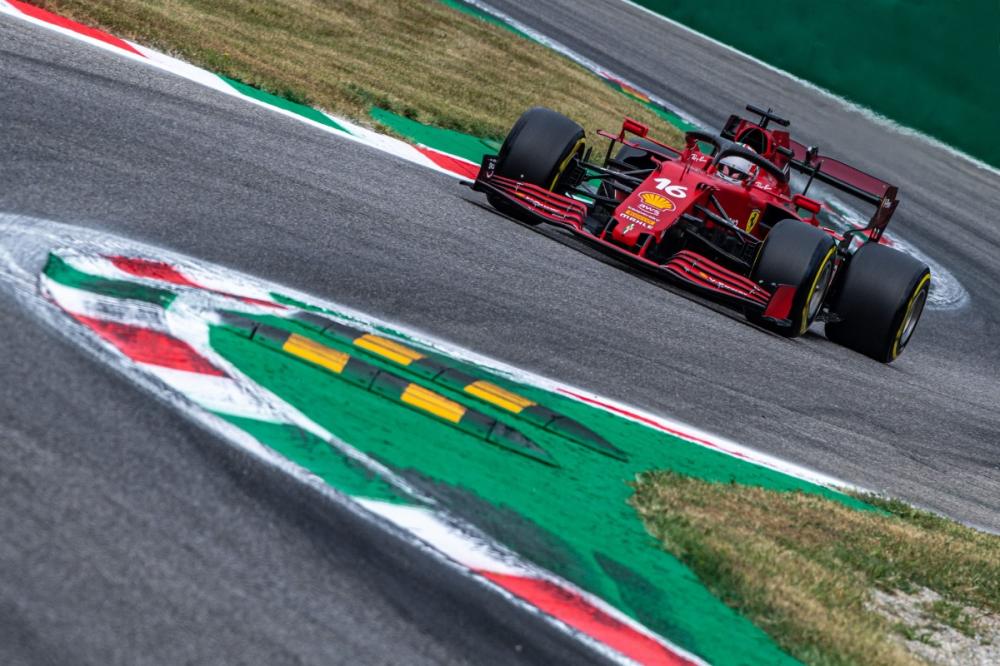 Charles Leclerc was fourth this afternoon at Ferrari’s home Grand Prix
A Safety Car period was required to facilitate the removal of both cars as the drivers headed on foot back to the pit garages, albeit separately. Racing resumed on lap 31 and Norris passed Leclerc approaching the second chicane to make it a McLaren 1-2 out front. So it remained to the chequered flag, with Pérez receiving a five second penalty for failing to give a position back to Leclerc which the Mexican had gained with assistance from an off-track excursion.

The podium trio was made up of an understandably jubilant Ricciardo and Norris and also Bottas, who had put in a strong drive from the last row on the grid. Pérez’s penalty dropped him from third to fifth behind Leclerc and, with Sainz sixth, the Ferrari fans at least had a little to cheer about. Norris proved himself to be the great team player he is by happily accepting second position today and not trying to fight his team-mate for the victory and ninth placed Russell again scored some points for Williams. Such was the pace of the McLarens that Ricciardo also earned the extra point for the fastest lap, achieved on the very last tour. 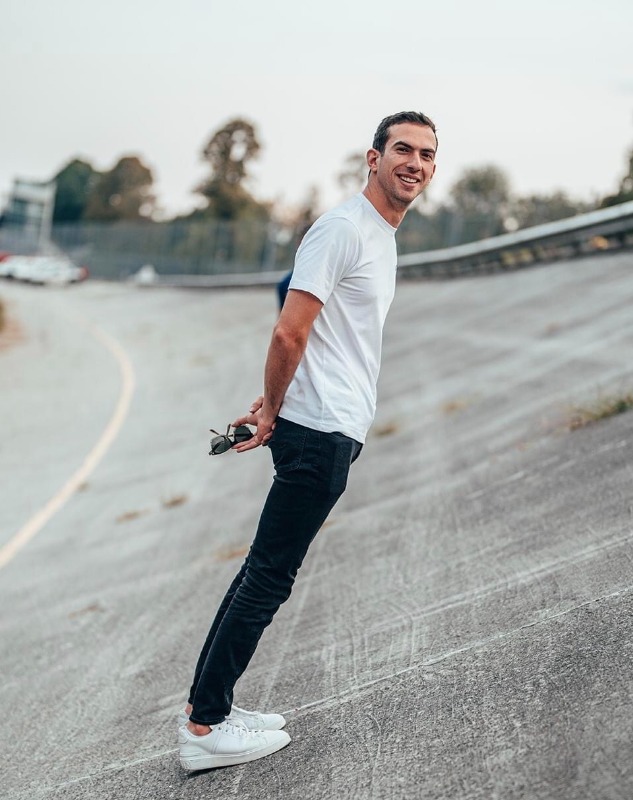 Williams’ Nicholas Latifi demonstrating the steepness of the old banking at Monza
After three Grands Prix on consecutive weekends there is now a two week gap before the next event on the calendar, which takes place at Sochi on Russia’s Black Sea coast. Perhaps as well after the Hamilton/Verstappen collision. Time for all to reset, regroup and get set for the next step in this thrilling season, with Verstappen now five points ahead of his rival.
2021 Formula 1 Drivers’ Championship

1 Mercedes 362.5
2 Red Bull 344.5
3 McLaren 215
Also by Graham Read...
Oscar ﻿Piastri At Centre Of F1 Contracts RowAlonso To Race For Aston Martin From 2023 OnwardsVerstappen Flies ﻿From 10th To Victory In HungaryFour-Time F1 Champion Vettel To RetireVerstappen On Top In France Ahead Of Mercedes Duo