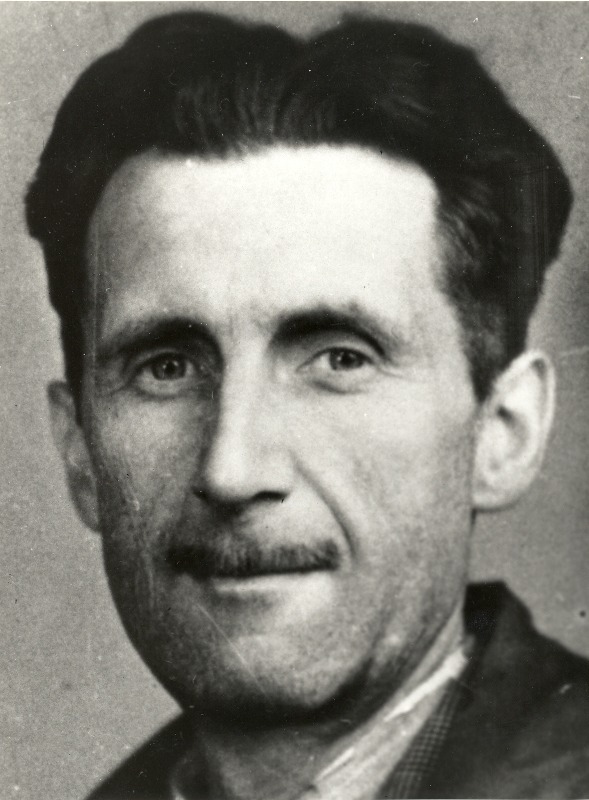 Orwell's Press Card Portrait, 1943.
With the media currently giving us daily updates about the military coup in Myanmar and protests in Russia, it seemed a good time to revisit the short contemporary classic, Animal Farm by George Orwell. Although I have read it several times, I haven’t opened it for a number of years and felt like a reminder was in order. It is short (you can read it in an afternoon) and although written in the simplest of styles, it is one of the most thought-provoking novels I have ever read. Originally captioned ‘a fairy story’, it is anything but.

Animal Farm tells the story of the animals of Manor Farm who are mistreated by the lazy farmer and his labourers. They hold a secret meeting one night and the seeds of revolution are sown in a rousing speech by the oldest of the pigs, Old Major. The animals agree that while humans take the fruits of animal labour, they make little contribution to production. It is time, they decide, for the animals to take over and to rightfully claim what is theirs. The opportunity presents itself one night when the drunken farmer fails to bed down the animals properly and the rebellion takes place. The animals successfully rout the humans and rename the farm, Animal Farm.

While the principal tenet of the farm is that ‘all animals are equal’, naturally, there needs to be leadership and the pigs assume this role. Of course, the reader needs to be able to suspend disbelief as the animals work together to bring in the harvest, milk the cows, collect the eggs and do all sorts of things which in reality they are totally unsuited for, except in a world with artistic licence. The animals are prepared to work hard and look forward to equal shares of the fruits of their labour. At first, things appear to run smoothly but…read on.

On the surface, this novella seems to be a simple, I hesitate to write children’s, story, but far more interesting is the political satire woven into it. Whilst it may be read on the most elementary of levels, there is also a much more profound interpretation as Animal Farm can be viewed as a metaphor for the Russian Revolution and the rise of the oppressive Stalin. 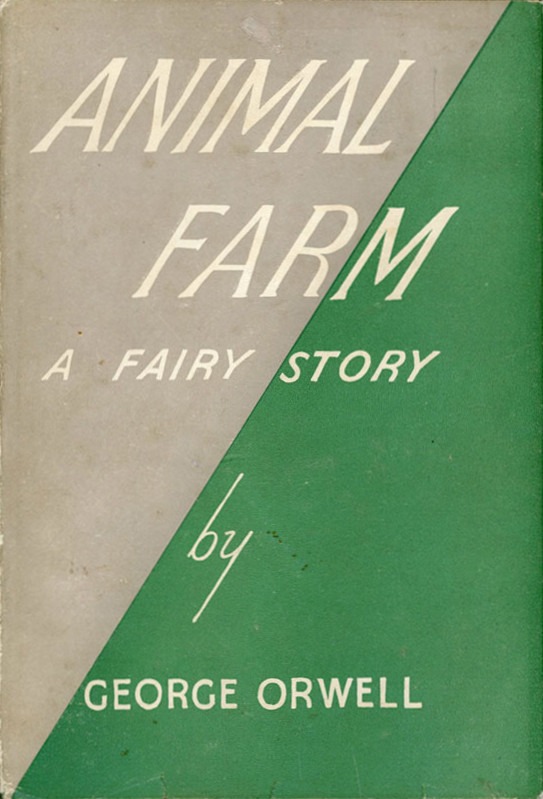 1st Edition Cover
The animals each represent different characters and groups within Russian history. In Old Major, whose speech describing his vision of a Socialist utopia, rouses the animals to revolution, the reader can identify the idealist Vladimir Lenin, who spearheaded the Russian Revolution of 1917. The cruel and treacherous Napoleon (Stalin) and the passionate, eloquent Snowball (Trotsky) pit their wits against each other. The propaganda machine which ensures that the animals trust their leaders, exists in the form of Squealer, and the loyal, hardworking Boxer is the embodiment of the party faithful. The secret police make their snarling presence felt and even religion, which has its uses, flutters in and out of view. Negotiations between Animal Farm and its neighbours echo Russia’s political dealings with Hitler and the capitalist governments of England and the USA.

Orwell makes clear the struggle for power which occurs between the factions in the guise of two ambitious pigs and he includes lies, the importance of education – or at least the lack of it - and even a head hunt, to explain the oppression, propaganda and elaborate excuses which led to the rise of the Soviet dictatorship. Much as Stalin in Communist Russia, Napoleon actively rewrites history, and convinces the animals that certain things never happened, or that their memories are not quite accurate. This is perhaps not so incredible: consider our modern era of (sometimes dangerous) ‘fake news’ and media spin where it becomes difficult to ascertain what is true any more.

Ultimately, Orwell suggests that rebellion is futile and that in the long run, nothing changes, as indicated by the return to the name Manor Farm at the end of the book but it is for you to decide whether or not you agree with his view. Although it is seen as an allegory of Russia and the Soviet Union under Communist Party rule, the cleverness of Orwell’s approach is that he manages to infuse his story with political inference while also telling an engaging tale about greed, corruption, and ‘society’ in a more general sense.

Some felt that this was the wrong message to be presenting in 1944 and ironically, Animal Farm very nearly didn’t make it into print at all. Not long after Orwell completed the first draft, his London flat was bombed and he feared the typescript had been destroyed. Fortunately, he later found it in the rubble and it was eventually published in 1945. It is a twentieth century classic which is definitely worth a read. For a visual interpretation, the cartoon version, of 1958, makes the narrative clear - if you can stand the appropriately harsh and sometimes discordant music which accompanies it.


Also by Artis-Ann ...
‘You Have To Know Your History If You Want To Put Things Right’ : Charity By Madeline DewhurstPractise To Deceive: Transcription By Kate AtkinsonJamaica Inn By Daphne du Maurier - A ReviewFighting The Big Boys: Village Of Second Chances By Gina HollandsReview: The Primary Objective By Martin Venning