Wok Juggling With Dave and Enoch 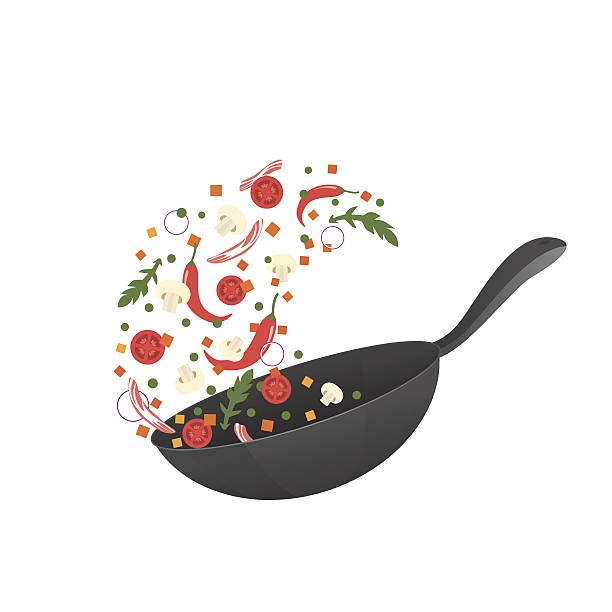 In a little house down a quiet lane by the side of a disused welly factory lived Enoch and Dave. Enoch sat at the table in their kitchen while Dave prepared the evening meal.

“Here Enoch,” said Dave, placing a sandwich before him. “I expect you’re hungry after a hard day at work, selling paper clips.”

“Not really Dave,” said Enoch, picking up and examining the sandwich. “My heart’s not in it anymore. Paper clip selling is so boring these days.”

“I doubt it,” he said, putting the sandwich back on its plate. “Unless it’s an enchanted sandwich that will make my life more thrilling!”

“Well!” said Dave, getting upset. “You’ve never complained about my sandwiches before!”

“It’s not just the sandwiches, Dave. Although once in a while it might be nice to have a cooked meal for a change. No, it’s more than that; it’s everything!”

“Everything!” said Enoch getting up and looking out of the window. “We’re in a rut Dave. Boring jobs, boring clothes, holidays at Cleethorpes every year and the same meal each evening.”

Dave stared at his sandwich.

“Let’s start with this then,” he said. “What else might we have to eat?”

“I’m not sure,” said Enoch, coming back to the table. “What we need is a cookery book of unusual recipes! We can buy one tomorrow!”

Dave hunted around the bookshops looking for the most exotic cookbook he could find, while Enoch went out to buy something called a wok. Apparently his colleagues at the office had said that this was absolutely vital when cooking exotic dishes! It turned out to be a large round and deep pan thing that needed seasoning before it could be used.

“It’s when you give the wok a really good scrubbing until it’s extremely clean, and then you burn cooking oil in it,” explained Enoch.

“Oh,” said Dave, thinking that there was obviously more to exotic cooking than first met the eye.

That afternoon they sat in their small kitchen, leafing through a copy of ‘Advanced Exotic Food For Complete Novices’, trying to find the most interesting meal that they could. On page 33 they found it:

“Gosh, that does sound exciting!” said Dave. “Where does it come from?”

“Italy,” said Enoch. “We’ll get the ingredients the next time we go shopping.”

“We’d better pack a suitcase then and make sure our passports are in order,” said Dave. “We’ll book a flight this weekend shall we?”

They bought some special Italian designer clothes, joined a crash course in learning Italian shopping phrases and then had a thoroughly enjoyable weekend gathering together all the ingredients in Vietri sul Mare on the Amalfi Coast. When they got back to their house, Enoch set about cooking the meal while Dave chatted to the neighbours, impressing them with his new suntan and his holiday snaps.

In the evening, everything was ready. The table was laid, a bottle of 2017 Tenuta di Trinoro Bianco stood cooling in an ice bucket, Enoch lit a candle and waited for Dave to come downstairs from where he was dressing for dinner.

“Very smart, Dave,” he said, offering him a chair.

“Why thank you, Enoch” said Dave.

And the meal was a brilliant success.

The next day, when Enoch got home from work, they sat down on the sofa with their cook book. On page 37 another unusual recipe caught their eye.

And so it was!

Enoch arranged to have a week’s holiday from the paper clip office, Dave organised their passage on the Orient Express and away they went to buy the ingredients. On the way, they stopped off in Paris to visit Enoch’s distant relative, Giselle Courgette, the famous French chef, who gave Enoch several useful tips on the art of trifle making. By the time they’d done their shopping and returned, eager to try out their new recipe, an idea had begun to sprout in Dave’s brain.

“I’ve had an idea!” he said. “Let’s invite Giselle over to stay for a holiday and while she’s here, she can teach us all she knows about cooking!”

And so he did.

Giselle was pleased to hear from Enoch and thought it was a super idea, even though she was busy entertaining a trade delegation from Singapore at the time.

“Bring them along as well!” said Enoch. “We’re always pleased to meet new and interesting people.”

And so she did.

Dave went out straight away and bought some army surplus sleeping bags and several new woks to cope with the extra guests, while Enoch hunted through his exotic cook book for eastern recipes.

When Giselle and her friends arrived there were many introductions to get through and much cheek kissing and bowing before one of their visitors blessed the house with some ceremonial wok juggling.

“Would you?” asked Enoch.

“Yes!” he said. “Especially if a meal was thrown in as well.”

“What!? Juggle a meal along with the woks?”

“No! Sit down and eat it in a restaurant while I watched!” he said.

“Well,” said Enoch “if it’s good enough for Cleethorpes, I don’t see why we can’t have such an establishment here!”

They all sat down and worked out where they could find the premises to start their new and exciting business venture. The disused welly factory seemed to be the best place, with Enoch and Dave running it, Giselle Courgette doing the cooking and the eastern trade delegation supplying the money, taking 60% of the profits as well as juggling the woks.

Enoch left the paper clip office after giving them a month’s notice, during which time Dave organised the work on the alterations to the factory. In no time at all ‘Dave and Enoch’s!’ was ready for the big opening night.

Famous people were invited to give the occasion a bit of glamour and Dave had his hair done at Alphonse’s of Scunthorpe. Photographers from society newspapers arrived to take pictures of the celebrities as they pulled up outside in their flashy cars, and everyone cheered when the first wok was tossed in the air by a businessman in a glittery costume.

The restaurant was a resounding success!


Also by Jonathan Humble...
Chasing Clouds - To See The World Through Poets’ EyesReview: What Is A Bong Tree? By Michael RosenThe Artist As Poet: Quest For Ions By BrowzanThe Dirigible Balloon: Preparing to Launch a New Webzine for Children’s PoetryDoggerel For The Discerning: 'Glad To Be A Dalek'
The food was lovely, Giselle and the wok jugglers were happy in their work and Dave and Enoch became rich and famous as a result. They were considered to be such an interesting couple that television producers fought each other to get them to appear on their weekday chat shows. Supermarket chains began to ask Dave and Enoch to sign autographs in their stores in order to boost their sales. They were even favourites with other cookery experts, who would pester them to endorse their new recipe books. It became impossible for them to relax at their new expensive home because the phone was always ringing with people wanting them to do things.

In fact, they became so famous and had such little time for themselves that eventually they got fed up with the whole thing. Dave began to miss the quiet and uneventful evenings beside the disused welly factory and Enoch craved the simplicity of making a jam sandwich without the worry of how it might appear to the press and culinary glitterati if he were caught with a butty in his hands.

Then one night they simply disappeared …

What happened to Dave and Enoch is a bit of a mystery. Nobody really knows … no one that is except for Pete and Isaac, who own and run a small sandwich bar in a lay-by on a quiet stretch of the A180 near the well-known and popular east coast seaside resort of Cleethorpes.