Meeting On A Train 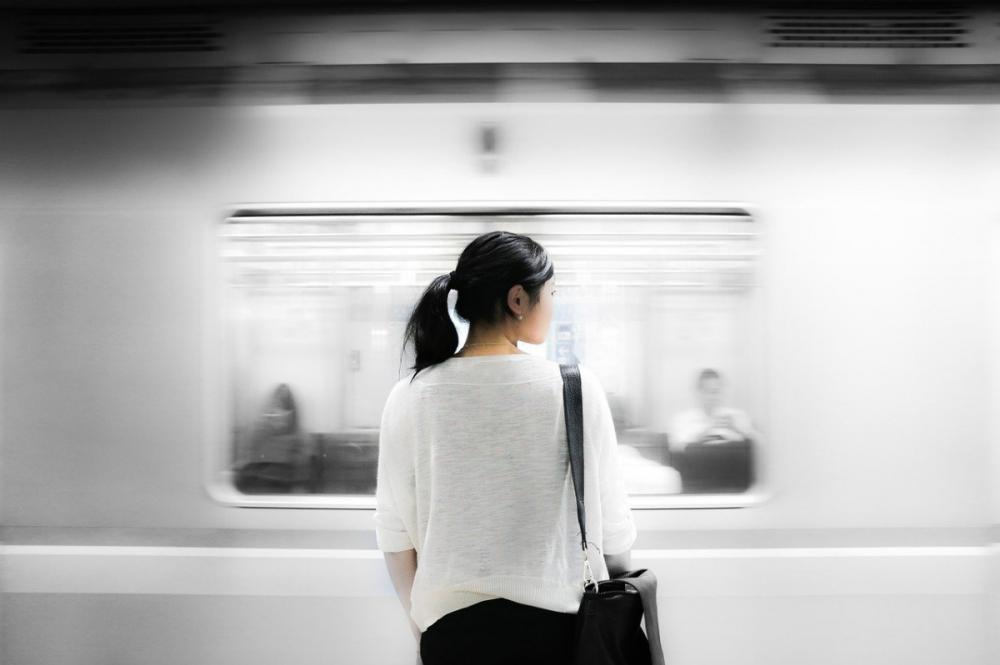 I only ever saw her three times, and the first time was on a train - hence the title of my story.

I had been on the train for not much above a minute before it began to move out of the station, and, to my surprise a young woman of perhaps twenty came along the corridor and to my carriage, and entered, handing me a note as she did so.

My surprise was twofold. Firstly, the train being almost empty, I did not expect a young lady to make a point of coming into a carriage of which I, a man whom she had never met, was the only occupant when there were plenty of alternative, and empty, carriages.

Secondly, I was surprised that I had not noticed her when I boarded the train, for, being a young man at the time - no, let me speak the truth, being a man, I would scarcely have failed to notice so pretty a girl. The train started from the station where I had just boarded; it was early morning and there were scarcely half a dozen passengers at this point - and yet I had not noticed her.

I was returning to University following some months absence owing to an illness which I prefer not to specify here.

I looked at the note on which were written in bold capitals:


PLEASE MAY I SHARE YOUR CARRIAGE.
I AM AFRAID TO BE ALONE.

I indicated that she was welcome, and she smiled and sat down next to me, although the carriage was otherwise empty. It seemed that she wished it to appear that we were together.

I say she smiled - but she did not speak. Indeed, I never heard any sound come from her lips, save on one occasion that I shall never forget. She did not speak, yet she appeared to hear me and understand what I said, for she would sometimes smile, sometimes incline her head.

Some five minutes or so later a man passed down the corridor, pausing for a moment to look into our carriage. He was tall and dark featured. Beyond that I noted nothing and gave him little heed. But his impact on the girl - I assume that it was his appearance that so affected her - was to produce a look of horror and fear on her countenance and to cause her to draw closer to me.
I say that she drew closer to me - true, but not so close that I could feel her touch.

And so our journey continued. I occasionally sought to make polite conversation, but no word passed her lips although she seemed to hear and understood all that I said.

And so we came to the station where I was to alight and proceed to my college on foot. She dismounted at the same time, and looked as though she might accompany me. I was about to exit the station with her when I realised that in my haste I had left a bag on the train. I hastened back and retrieved it just before the train moved off again.

But when I returned to the platform the young woman had disappeared. It was still very early, and there were not many travellers on the platform and yet, look as I might, I could see no sign of her.

I was sorry to have missed her, but soon forgot the incident as I had to report to my College and my Tutor to explain my long absence and to set about resuming my studies.

The second time that I saw her was a few weeks later. I was on my way to a lecture when I saw her not far from the College. She saw me, and smiled, so I went over to her. I said that I had to attend a lecture, but if she could wait perhaps we might share lunch together later. She smiled agreement - although still she did not speak.

I suggested that she might wait in the college quad while I went to my lecture. Now, I wish that I had not gone, but I was a conscientious student and, besides, owing to my absence I had much to catch up on. I left her in the quad, but as I turned away I was surprised to see that, rather than sit on the grass in the sunny area she chose to be in shadows near the wall.

I might just as well have not attended the lecture. I heard little that was said and could not now tell you whether the lecturer was inspiring or dull, informative or pedestrian, for I could not get the girl out of my mind.

At last I was free to leave. Running down the stairs and into the quad, I looked about for her. At first I could see no sign. But then I saw her about to leave the college moving quickly and it somehow seemed, fearfully. I followed, but once outside the gates I looked, and looked, but could see no sign of her. Again she had disappeared almost before my eyes.

The third and last time I saw her was in the High where Oxford's Examination Hall was situated. I had just completed an exam and was emerging from the Examination School, discussing with fellow students the questions and how we thought we had fared. Then I looked up, and some distance away, on the edge of the crowd of students emerging onto the High, I saw her again. I think she may have seen me first. She looked, and smiled, and then responded to my wave.

I endeavoured to weave my way through the crowd to reach her. But when I had almost done so a coach came at speed down the road and briefly stopped. Two arms reached out and grabbed the girl, hauling her into the vehicle. I saw the face of a dark featured man. She gave out a great scream, the only sound I ever heard her make, lost to most amidst the noise of relieved or fearful students - yet surely I heard it? As I looked, I saw the crest on the coach door - and shuddered.

I vowed at that moment that I would not rest until I had found her again; until I had solved the mystery which surrounded her.


That was five years ago - and still I am looking.
Next Episode