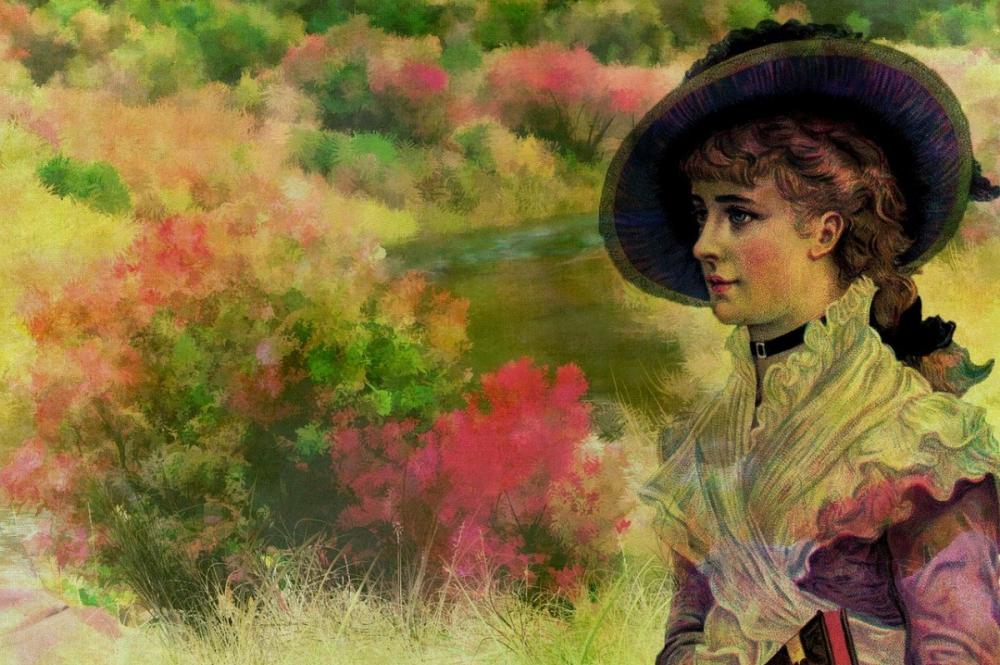 Mrs Samantha Fortescue-Browne was a lady in every sense of the word. Well, not quite every sense, for she was not actually addressed as Lady Fortescue-Browne, but she had little doubt that the day should come when this would be so.

Those who knew her well - that is to say those who had known her in earlier times - wondered where the 'Fortescue' came from, and how it was that the last part of her now hyphenated name was lengthened by the addition of an 'e'. Even the name 'Samantha' seemed foreign to those who had known her at school as Deidre, and usually as 'Dreary Deidre'.

But now she was a lady, and one can hardly doubt that were she ever in the unpleasant position of speaking about some garden implement such as a spade she would surely refer to it as a bloody shovel!

She and her friend Mrs Mary Smith were both widows - although truth to tell, those who spoke of Mrs Fortescue-Browne's former partner tended to described him as "the man she lived with".

By contrast, Mrs Smith was definitely a widow, and an unassuming one at that.

I use the word 'friend' concerning their relationship with some hesitation. Mrs Fortescue-Browne regarded Mary Smith rather as an acolyte, a disciple who might tell others of the privilege she had in being condescended to by such a lady. Mary Smith accepted being looked down upon in exchange for the chance of sitting in a beautiful garden in summer and a grand drawing room in winter, and a free tea. She had no garden - and little money for luxuries.

So regular were these meetings that on one occasion when Mrs Fortescue-Browne was not to be found in the Doctor's Waiting Room on a particular Monday, Mrs Smith wondered why. "Oh", said the lady, "I wasn't feeling well."

Let me enter a caveat here. You may wonder how it was that a lady such as Mrs Fortescue-Browne should patronise the NHS. The truth was that she rather liked Dr Thomas who, foolish man, did not take on private patients or pay home visits other than on exceptional occasions.

On Wednesday afternoons the two shared tea; in Mrs Fortescue-Browne's garden in clement weather, or in her Withdrawing Room on colder days. They never met at Mrs Smith's. She lived in a conventional terraced house in a part of the town of which Mrs Fortescue-Browne was ignorant - an ignorance which she had no intention of changing.

Although they met as friends, it was, as I have already pointed out, not exactly a friendship of equals. Mrs Fortescue-Browne always addressed Mrs Smith as 'Mary', while Mrs Smith referred to her hostess as 'Mrs Fortescue-Browne'. Earlier in their acquaintance she had dared to address her as 'Sam' but the frosty look, which such familiarity produced, made it clear that such was not the correct way, even in an informal setting, to address Mrs Fortescue-Browne.

On one of those occasions when they sat in the garden a bird flew over and dropped something that shall be nameless on Mrs Fortescue-Browne's dress. "Quick, Mary. Get me a tissue" she cried.

In an unusual humorous response Mrs Smith replied; "There's no point. It will be miles away by now!" The witticism was not appreciated.

Tea and sandwiches were usually prepared by Mrs Fortescue-Browne's maid who, by some strange coincidence, was called Deardre! 'Friends' of Mrs Fortescue-Browne believed that she had been chosen just because of her name, so that should any unfortunate reference be made to the lady of the house as 'Deardre' she could quickly shrug it off as a reference to her maid.

On those few occasions when Deardre - the maid that is - had a half-day off on a Wednesday afternoon Mrs Smith was charged with the responsibility of making the tea and preparing the sandwiches. She was really no more than a skivy, although, to be fair, Mrs Fortescue-Browne provided the ingredients required. On the first occasion when Mrs Smith was entrusted with this task she made the terrible error - not one she would repeat - of failing to cut the crusts off the sandwiches. The error was made even more apparent by the fact that Mrs Fortescue-Browne found herself unable to eat anything that afternoon.

And so the 'friendship' continued for some time. And surely this shows something of the nobility of Mrs Fortescue-Browne's nature in that she accepted as a 'friend' someone who was scarcely superior to her maid in social standing. One incident bore this out when Mrs Smith, seeking to copy the ways of the superior lady, stuck out her little finger as she raised her cup to her lips. So foreign was the act to her that she almost dropped the china cup. Oh dear, she could have broken it. These cups were so much more delicate than the chipped mug she used at home!

But there came a moment when the mouse-like Mary Smith changed. I cannot remember now whether it was the sandwich incident, or Mrs Fortescue-Browne's failure to appreciate her little joke about the bird, or the sense of inferiority that was forced upon her whenever they met, or some other triviality that finally propelled her to her act of rebellion.

On that particular Wednesday, Deardre again being absent, it fell one more to Mrs Smith to prepare the tea. And now the worm turned. With an even more ingratiating smile Mrs Smith brought out the tea. Unusually, she had already poured it into the cups, leaving the tea pot for a refill should it be required. Mary Smith thought that it would not be.

It was not until the following morning that the police were called to the home of Mrs Fortescue-Browne where they found her in the garden in her chair - dead! Her tea, it was later discovered, had contained a number of grains of arsenic. She would never be a "Lady" now.