'You're My Favourite': Jane Eyre By Charlotte Brontë 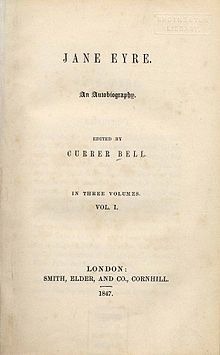 Title page of the first Jane Eyre edition.
How often have you been asked to name your favourite book? Recently, on Facebook and other social media sites, people have listed their favourite places, drinks, names they are known by, (beware, if drawn into one of these threads, that you are not providing scammers with too much personal information), and once, just once, have I come across one asking me to name my favourite book…and, Reader: I struggled.

There are so many to choose from and what are my criteria? Do I name the one I’ve just read because it was brilliant, do I choose one I would happily re-read, or go for a classic which has stood the test of time and is not some fleeting wonder? I have even thought of naming Enid Blyton’s Famous Five series because they are, perhaps unbelievably, responsible for instilling a love of reading in the first place.

My reading history: I started with Ladybird’s Going to a Party which I could recite before I actually started to read. I can picture it now: Susan in a white dress with a blue sash and Peter with a white shirt and blue tie. According to memory, accurate or not, I moved on to the Famous Five although I never did take to The Secret Seven in the same way. Then it was The Twins at St Clare’s and Blyton’s Adventure series before graduating to the Chalet School, then Anne of Green Gables and of course, Little Women. Somewhere along the line came the Narnia series and later, Agatha Christie’s mysteries (most of them) which I swapped regularly with my form tutor. I felt a sense of achievement when I read The Hobbit, closely followed by all 1076 pages of my paperback copy of The Lord of the Rings and of course there has been everything in between, including Orwell’s Animal Farm, bought for me by my older brother who successfully tried to steer me onto what he thought was worthier literature. In truth, I cannot remember all I have read (or even half of it) so how can I choose my favourite?


Charlotte Brontë by George Richmond (1850)
Today’s answer, and I may change my mind tomorrow, is Charlotte Brontë’s Jane Eyre. Written in 1847, it was thought to be partly autobiographical as it was inspired in many ways by the people she knew, the things she had done and the places she had visited.

The book opens with Jane Eyre, an orphan, living unhappily with her relations, the Reeds, who openly resent, neglect and abuse Jane, and justify it by saying she is a charity case and should be grateful for any care she gets. After a fight with her older cousin, John, Jane is locked in the Red Room, which she believes is haunted. In her terror, she faints. Still with a fighting spirit, however, and deemed too much to handle, Jane is sent to Lowood Hall, a charity school for girls, where they are taught to be governesses. The unhappy time Jane spends at Lowood School reflects Charlotte’s own experiences at the Clergy Daughters’ School in Cowan Bridge. At Lowood, her only friend dies (perhaps recalling the deaths, at school, of two of Bronte’s sisters) while Jane survives a typhoid epidemic.

Brontë herself was a Governess, and as a young woman, Jane seeks employment and finds a position at Thornfield Hall as Governess to Adele, the ward of the dark and brooding Edward Rochester. A relationship develops between Jane and Edward but religious conviction and her conscience drive her from him when he reveals he is already married, despite the unhappy circumstances of that conjugal relationship. Jane leaves and, hungry, lost and wretched, having lost the few possessions she took with her, she is rescued by the Rivers' siblings, who are, ironically, later revealed, to be distant relatives. She finds some peace with them although she can never completely forget Mr Rochester. Ultimately, however, all turns out well. Jane refuses another proposal of marriage, inherits a vast fortune and becomes a woman of means. After mysteriously hearing him calling to her in a dream, Jane returns, to find Mr Rochester, widowered after a tragic event and an horrific fire. If the ending lacks youthful passion, it is certainly more than satisfactory as heart conquers head.


Also by Artis-Ann ...
Review: Fatal Solution By Leslie Scase‘The Grit In All Of Us. Every Writer’s Ideal Material’: Red Sky At Noon By Simon Sebag MontefioreReview: Not For All The Tea In China By Chris BurrowsThe Greatest Doublecross In The History Of Espionage: Our Friends In Berlin By Anthony Quinn‘Goddesses, Housewives Or Whores’: Women Of York By Claire Shaw
This book has it all. As a document of social history, it depicts Victorian England and its ideals and principles, yet the eponymous protagonist is female and strong-willed, hardly the typical retiring Victorian female. The book was first published under the pen name Currer Bell, to disguise the fact it had been written by a woman, such was the power of female oppression at the time. Her cruel treatment as a child is characteristic of an austere nineteenth century social structure and establishes some sympathy for the young Jane, despite defending herself whenever possible against the bullying and brutality she endures. The book reveals the insensitive treatment of mental illness by the Victorians who did not understand the workings of the mind. The gothic nature of Thornfield Hall and the mysterious events set therein, add to the variety of the novel as do the wild Yorkshire Moors from which Jane is rescued. There are secrets to be revealed, some dark humour and alliances which offer some comfort in dark times. The interaction between characters is realistic for the historical setting and the reader is propelled through the novel by a desire to know what will happen next.

It is one I have read several times and has a heroine I admire. I have watched various film adaptations of it and I never seem to tire of it, so maybe it deserves the accolade of being my favourite – for now.