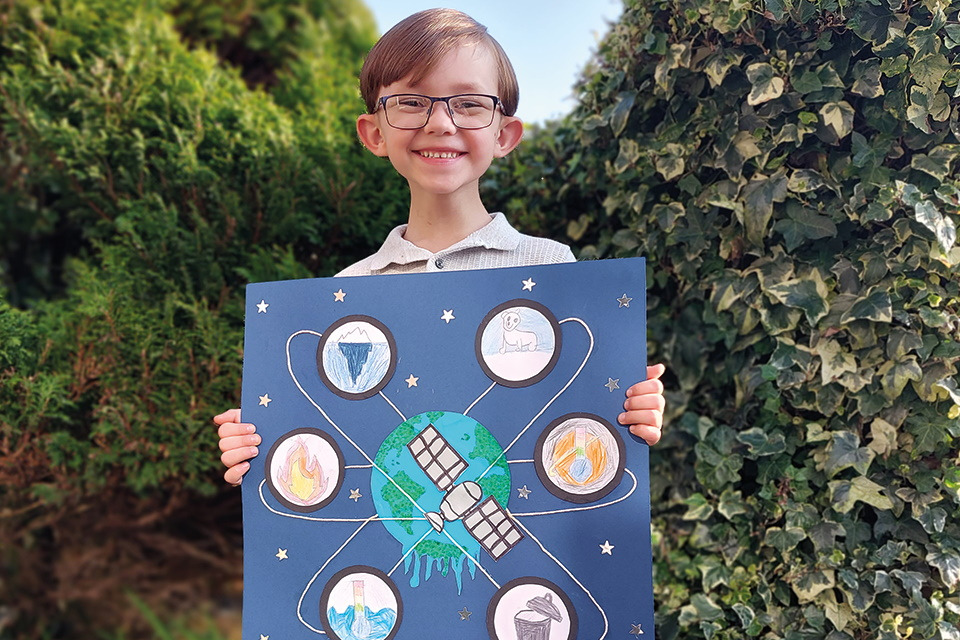 Competition winner Callum, age 6, from Bolton, with his winning design!
Callum Wilkinson’s winning design, announced on the International Day of Human Spaceflight (12 April) includes a satellite orbiting the Earth, with surrounding images themed around the role of space technology in monitoring and tackling climate change.

More than 10,000 primary school children aged between 4 and 11 years old entered the competition, which was run by the UK Space Agency in collaboration with Hopscotch Consulting to help inspire the next generation to consider a career in the space sector. While Callum was the overall winner, there were also 13 regional winners. 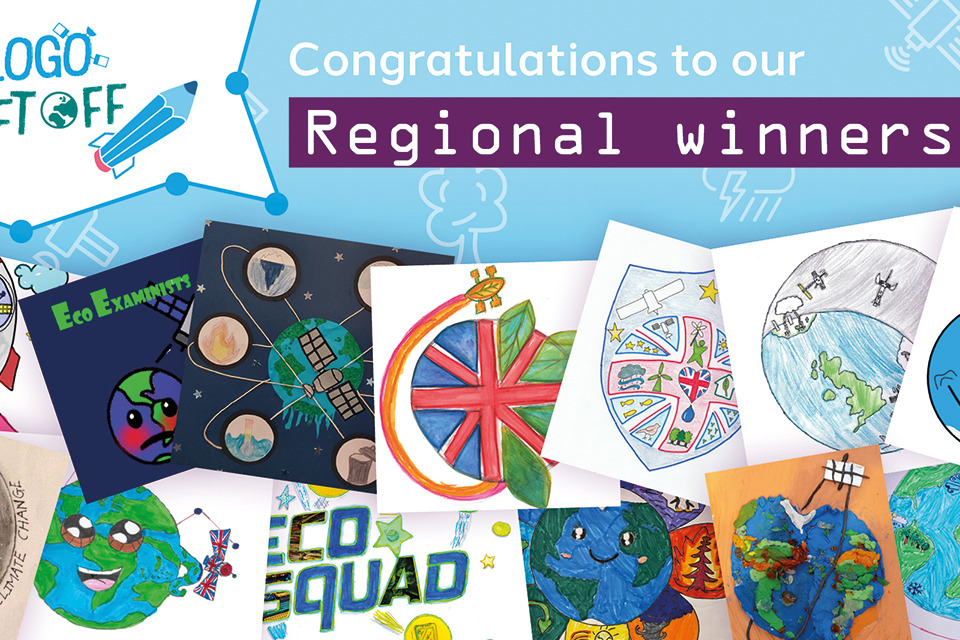 The winning entries from each region of the UK.
The UK is set to become the first country in Europe to host small satellite launches this year, as set out in the National Space Strategy. As well as monitoring climate change, satellite data can be used to help provide essential daily services, such as television broadcasting and navigation systems, and to improve connectivity. The UK already employs more than 45,000 people in space jobs and having our own domestic launch capability will create new opportunities to benefit people and businesses across the UK.


Ian Annett, Deputy CEO at UK Space Agency, said:
"Thousands of people across the UK already work in our growing space sector, and there will be even more high-value jobs created as satellite launches begin from British spaceports this year.

"To support this exciting and important industry, we must inspire talented young people to consider future careers in science and engineering. The Logo Lift Off competition has uncovered fantastic ideas from children like Callum, right across the UK and given them an opportunity to learn how satellite data is helping to tackle global challenges such as climate change.

"Congratulations to the winners, and all those who took part."

The UK’s first small satellite launch is set to take place from Spaceport Cornwall later this year, followed by vertical launches from Scotland at both Space Hub Sutherland in the Highlands and SaxaVord Spaceport in Shetland.


Logo Lift Off winner, Callum, a pupil at Blackrod Primary school, in Bolton, said:
"My design shows orbits made of string and has pictures on to show what the satellites are going to be used for.

"I went on the internet and learnt loads of things about satellites and climate change and then the idea just burst into my brain, and I planned it out on the computer before making it. I feel very proud of myself and really, really on top of the world!"

As well as seeing his design on the rocket, Callum will be invited to visit the first launch from the UK. He will also receive a goody bag, a framed certificate, a picture of his designed artwork as it will appear on the rocket, and a Science, Technology, Engineering, Art and Mathematics (STEAM) learning kit.

Thirteen other entries were crowned regional winners in the Logo Lift Off competition and will receive goody bags, STEAM kits, personalised certificates and the opportunity for their class to attend an online talk with a UK Space Agency representative.


The 13 regional winning entries are:

Around half of the different types of data needed to Accurately monitor the Earth’s climate are currently collected from space. Satellites are used routinely to monitor the polar ice caps and changing sea levels, measure the temperature of the oceans and deserts, and even to count endangered animals such as whales and walrus. The UK is playing an important role in three new missions to measure carbon emissions from space (MicroCarb), improve climate data (TRUTHS), and monitor the health of forests (Biomass).