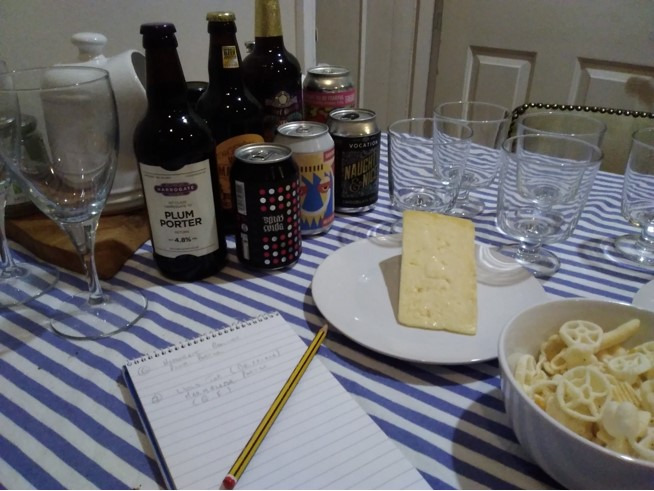 At this time of year, our tastes change dramatically. Chilled lagers and rosé wines that were delicious in the summer leave us a bit cold. At the same time, those thick, dense reds are just the thing for drinking with a rich stew and herby dumplings, and darker beers are more warming than their lighter cousins.

We’re regularly offered mulled wine when we go festive visiting. I enjoy red wine, so this suits me. Not everyone does, though, but you can treat cider in the same way if you want to ring the changes. Simply warm it in a pan with sugar (to taste), a couple of cinnamon sticks, six or so cloves and the same number of allspice berries. An easy, delicious twist on this is the Pimm’s No3 Winter Cup. Whereas the better-known Pimm’s No1 is based on gin and mixes well with chilled lemonade and summer fruits, the Winter Cup is based on brandy. Mix it with hot apple juice and serve it with half a slice of orange, for a festive, spiced drink that will defrost those chilliest of guests.


Mulled wine
Many of Yorkshire’s breweries produce winter specials. As befits the season, they tend to be darker, richer and often flavoured with spices or other ingredients. You’re probably not going to want to drink them all night at a party, but they’re superb for drinking on a cold night, sitting by the fireside or binge-watching your favourite serial.

We sampled a number, from all four corners of Yorkshire, and have come up with four recommendations. All four go well with strong cheese, crackers and home-made chutney. Three of the final four are brewed in North Yorkshire: the east and west of the region are going to have to pull their festive socks up!

Raisins to be Fearful, is by Abbeydale brewery in Sheffield. It’s a most unusual brew, but we found it utterly compelling. Brewed in a Belgian “Dubbel” style, it has a sour-savoury edge that reminded me of Japanese flavours. What made it so compelling was the addition of very lightly smoked dried fruits. At no point did the smoke dominate - the brewer has achieved an impressive balancing act – but it was a delightful reminder of nights by the fire. A word of warning, though: at 7%ABV, it’s the strongest brew I’m recommending and should be treated with respect.


Also by The Aperitif Guy...
Dinner Party Menu PlanningGreen And Pleasant: A Celebration Of The Produce Of EnglandSimply SoupOliver Fozard: Quite a Bashful ChappieA Brief History Of Gin
With Sam Smith’s 30th Anniversary Winter Welcome Ale, we’re back on familiar territory. Indeed, if Raisins to be Fearful is the most challenging of my recommendations, Sam’s Winter Welcome is the most comfortable. It’s a good, honest, malty ale, with just enough hoppy bitterness to bring it to life. There are no bells or whistles with this ale, no unique features to draw your attention, but that quiet reassurance is exactly what makes it so good. A good one for board games with friends.

Brass Castle brewery in Malton produces a lovely, smooth porter called Bad Kitty.Whereas stouts tend towards boldness and bitterness, porters are generally characterised by rich, dark malt flavours. The hops are a supporting player, not the dominating flavour. It’s become fashionable to add chocolate, coffee, liquorice and a whole host of other flavours to stouts and porters, and we certainly tasted some startling examples. Most of them went straight down the sink,

I’m afraid. Bad Kitty, however, is a vanilla-flavoured porter, where the additional ingredient is used to smooth out and balance the stronger flavours, rather than shout out above them. I hadn’t expected to like this so much, but it was delicious.

My final recommendation is a bit of a Harrogate institution that had managed to escape me until this year.

Harrogate Brewery’s Plum Porter is dominated by the aroma and taste of jammy, damson plums from the moment you open the bottle. At first, it has notes of sherbet about it. It smells sweet but the drink is drier than you’d expect. The texture is light, not in any way thick or dense. Once it’s been opened a few minutes, the flavour of roasted malt starts to creep up behind the plums, balancing their sharpness with its smooth, “Malteeser” taste. The hops show themselves on the dry, tangy finish.

This is such a unique drink that you’re unlikely to drink more than one bottle at a time, but as the accompaniment to a restful night on your own, with a cheese plate and your favourite music, it’s superb!

Talking of being on your own, I love entertaining, but need to take an hour or so to recover after everyone’s gone home. That’s the time for my partner and I to have a nightcap together and wind down before bed. I like strong nightcaps; he likes milky drinks.

My partner’s favourite nightcap at this time of year is a shot of amaretto liqueur on ice, topped up with milk. I like to mix Cognac with The King’s Ginger liqueur (no ice). The heat of the alcohol is matched by the fiery ginger.

Whatever you drink this winter, do it with moderation and respect for those who will share the road with you in the morning, and have a happy and peaceful festive season.

The Aperitif Guy keeps a regular blog about food, drink and entertaining, which can be found at blog.theaperitifguy.co.uk , or you can follow him on Twitter @AperitifGuy