Wild Polio Wiped Out In Africa With UK Aid Support

World Health Organization (WHO) announces the end of wild polio in Africa, marking a major step towards global eradication of the disease. 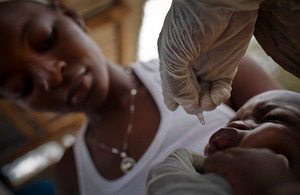 A child is vaccinated against polio in Sierra Leone in 2016. Picture: Gavi/Kate Holt
UK efforts to stop wild polio in Africa have contributed to the continent being officially declared free from the disease, which can kill or maim children for life.

This announcement by the World Health Organization follows no new wild polio cases being registered across the continent for four years. Wild polio was previously the predominant cause of the disease and the polio vaccine protects individuals against this form of the virus. Just 25 years ago polio was paralysing an estimated 75,000 children a year in Africa.

The UK is one of the top donors to the Global Polio Eradication Initiative (GPEI), which has vaccinated millions of children against polio in the world’s poorest countries. As a result of their work more than 18 million people are able to walk who would otherwise have been paralysed by the virus. Support from the UK has helped 220 million children across 47 countries in Africa.

Last year, the UK committed funding to vaccinate more than 400 million children against polio across the world every year until 2023. It will save an estimated 650,000 children from life-long paralysis every year and support over 20 million staff and volunteers worldwide to deliver polio vaccination and broader health services to communities for those affected by the disease.

The funding will help provide large scale immunisations for children in high risk countries like Pakistan and Afghanistan, where wild polio yet to be eradicated. It will also support work across Africa where there have been increasing outbreaks of vaccine-derived poliovirus which continue to paralyse children.

In June, the Prime Minister hosted the Global Vaccine Summit which raised over $8.8bn to vaccinate 300 million more children in the world’s poorest countries against diseases including measles, polio and cholera. The UK is also funding international efforts to develop a safe, workable coronavirus vaccine that will be available throughout the world – as the biggest country donor to the Coalition for Epidemic Preparedness Innovations.

"Thirty years ago, over 100 countries had wild polio. Now, every country in Africa is free from the disease – in large part thanks to UK aid helping to vaccinate children and strengthen health systems across the continent – so no child need suffer again. This outstanding achievement shows what the world can achieve when we work together to tackle global health crises.

"There is still work to do and the UK will keep working to end all types of polio to prevent people suffering from this debilitating disease."

August 2019 marked three consecutive years since Nigeria, the last African country with wild polio, had a case of wild poliovirus. Since then the Africa Regional Certification Commission for Polio Eradication, an independent body of experts, has reviewed data from across the continent, concluding in today’s announcement.

Pakistan and Afghanistan are now the only two countries with endemic polio. Vaccination campaigns in both countries have now resumed after being paused during coronavirus lockdowns. Until wild polio is eliminated in every country, there is a risk it could spread across borders and proliferate again.

The UK is also funding international efforts to develop a safe, workable coronavirus vaccine that will be available throughout the world – as the biggest country donor to the Coalition for Epidemic Preparedness Innovations (CEPI).