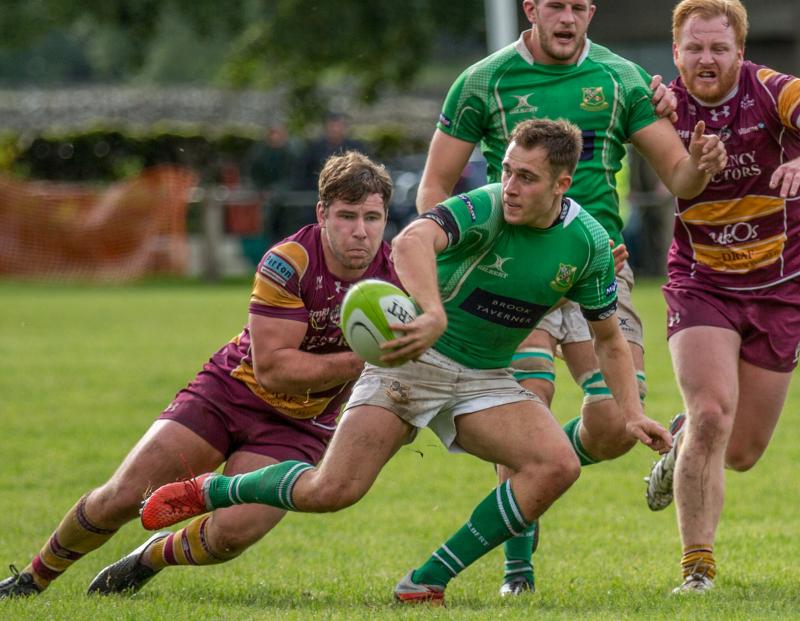 Will Edwards offloads after splitting the defence open
Dale started their home campaign with a hard fought victory over Sedgley Park.

This was a battle of the forwards, and both sets of backs gained credit for moving the ball around and tackling very well. The result was an entertaining afternoon and the result was in doubt until the final whistle. Dale’s Head Coach, Jon Feeley, was confident from the start saying “We’ll win today” just before kick off. That resolve and confidence spread out to the team with players doing justice to wearing the green shirt and leaving nothing out on the pitch.

Wharfedale had to sustain long periods of pressure but held the line and Park found it hard to break the resolve of the Green Machine.

The Tigers started well but a superb tackle from Ben Leacock was followed up by Dan Stockdale who forced a penalty. Dale were guilty of small errors early on and this gave Park some good positions, but they could not capitalize, and a superb tackle from Rian Hamilton, who then forced a penalty, kept them at bay. Dale lost the resulting line out but strong tackling forced Sedgley back and Dale soon won the ball back.

Good drives from the forwards took the ball up to half way and then the ball was spun to the right. Rian Hamilton benefited from excellent work by Rhys Lovegrove, who took out three players, to open the scoring. Tom Mann converted.

Sedgley then created two good tries. Matthew Riley and Jamie Harrison touched down with Oliver Glasse converting both to take Park into the lead at half time. This was the result of long periods spent in Dale’s half. The defence was good and if there was a problem it was the inability to find a decent touch when Dale had a chance to clear. This meant that the pressure could be maintained by Park who were still in Wharfedale’s 22. It looked like the scores could be tied at half time but Park’s second try came on the stroke of half time and they went in leading by 7 points.

Dale came out with renewed purpose after the interval. Again, Park had possession but could not make progress and eventually kicked the ball away. The ball was taken by Will Lawn and the ball moved right. Hamilton grabbed his second after following up his own grubber kick to beat the defence to touch down for a converted try.

Park’s pack rumbled forwards for a while and with the help of a couple of penalties got into Dale’s 22. A superb tackle by Matty Houghton stopped progress. Houghton released the player and got hands on the ball to get the penalty. Dale moved up to half with a good kick and chase and George Hedgley forced a penalty at the ruck. 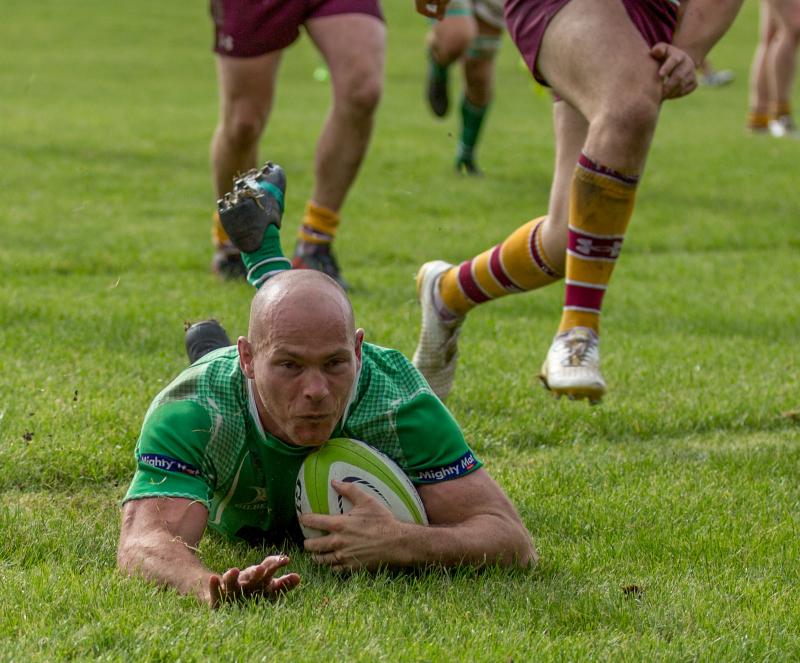 Rhys Lovegrove touches down after receiving Will Edwards’ offload
The Greens now had good field position and soon had Park moving backwards. First a burst from Sam Booker was followed by good second and third phase ball. A break by Will Edwards was finished off by Rhys Lovegrove but Mann missed from the tee. Dale were now back in the lead.

Park were not finished and put pressure on Dale ending with Andrew Riley scoring in the right hand corner. Glasse could not convert so the scores were level - 19 apiece.

Good pressure from Oli Cicognini led to Park dropping the restart and giving Dale an attacking scrum. Dale’s winning, bonus point try came when Star Man, Matt Houghton, took the ball on the Park 22 and crashed through Park’s Samuel Lowthion to almost go over. A no arms tackle from Park’s Andrew Riley led to a Penalty Try, a yellow card to Riley and 5 points to Wharfedale. 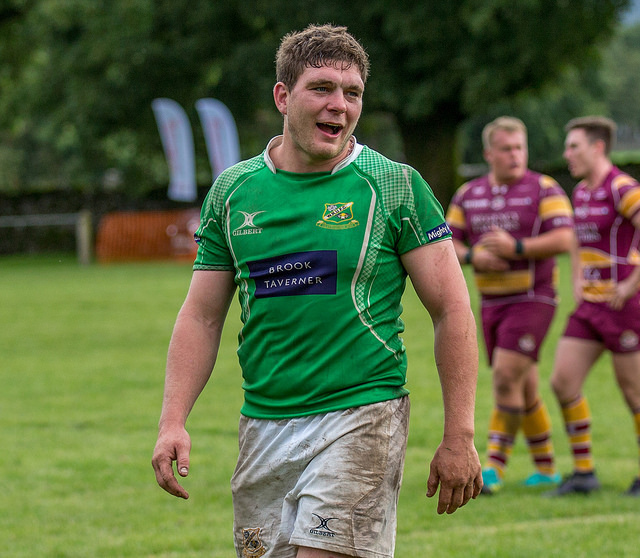 This was a stirring performance in front of a good crowd. With some experienced players missing and a persistent drizzle, the faithful were a little worried before kick off. Feeley’s words spread soon to the crowd and, at even at half time, trailing by two tries to one, there was optimism down the Avenue. Even the weather responded to Feeley as the rain cleared.

There were many performances from the Greens that could have won the Star Man award in the Rugby Paper. Matty Houghton got the nudge for his outstanding work rate and success at the break down. Not far behind were Chris Walker for similar reasons. The backs all deserve credit especially Rian Hamilton. And so to Hinckley who are top of the table. Last year’s encounters saw two great matches even though the teams were at different ends of the table. Dale have now two wins under their belt which was the same number they had at Christmas in last season’s campaign.