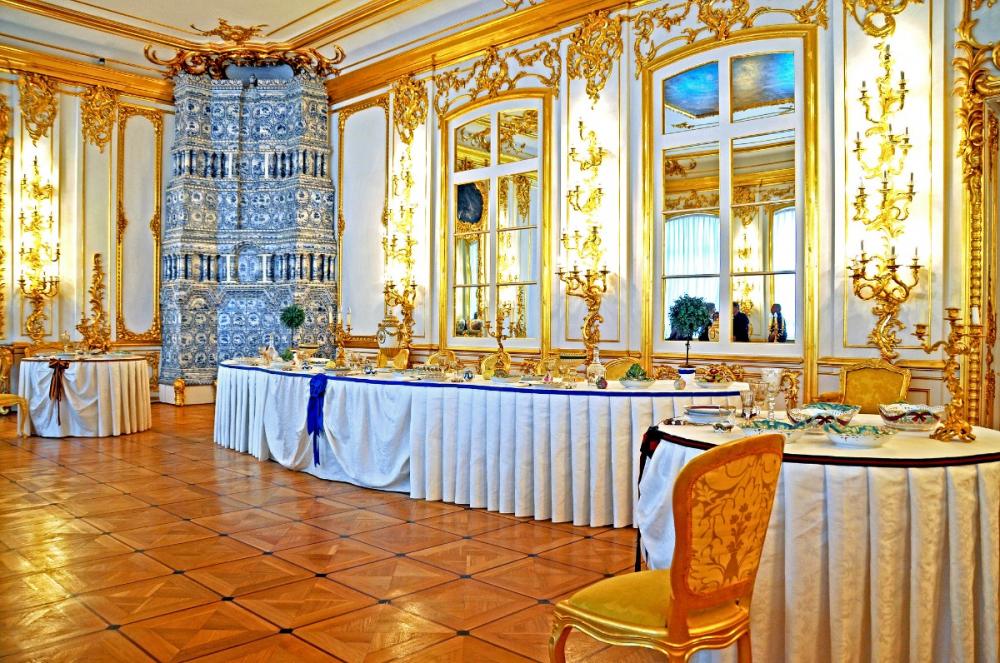 Catherine Palace Dining Room. Photo: Dennis Jarvis Flickr
We don't think of our food culture in western Europe as having been influenced by Russia, but without it we wouldn't have chefs in tall hats, pre-dinner drinks & nibbles or dining in a series of courses. If you've been following this series about menu-planning, you'll know that dining in courses is known as service russe - Russian service.

When the Tsars established their capital at St Petersburg, they made a conscious determination to look westward to Europe. Catherine the Great, in particular, brought in western aesthetics in art and design and western ideas about education and government. She introduced the practice of speaking French at the Imperial court, since French was the most popular language among European diplomats at the time, and brought over French cooks to work at court.

Very quickly, it became very fashionable to employ a French cook, bringing French flair to the vast resources the Russian empire brought to the capital. The Russian Orthodox Church had very strict and somewhat complex rules about abstaining from certain foods on certain days. This, and the court's entirely justified fear of assassination by poisoning, made it more sensible to serve one dish at a time. 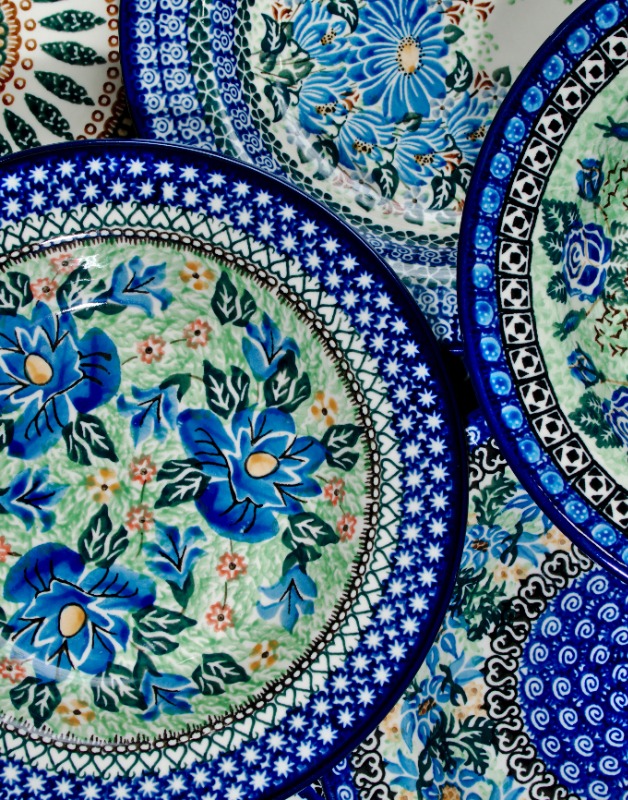 Photo by Michael Dziedzic on Unsplash
The best of the cooks discovered that this way of serving food lent itself to showing off their skill and imagination, offering a sequence of complimentary and contrasting dishes to delight the eye, nose and palate. Diplomats, merchants and other travellers from western Europe took this fashion home with them, and when the French cooks eventually left Russia (due to a swing in fashion and the continuing popularity of assassination), their expertise in this style of dining went with them.

Britain being Britain, the new style didn't really catch on here until the death of Queen Victoria, but it took hold as firmly as it had done in France and throughout Europe. It allows you to match each dish to its own wine, so became popular among houses with a well-stocked cellar. This is still a key advantage for this style of dining if you like to practise wine-matching.

Traditional Russian home food - dumplings with onions and herbs in a pot with hot chicken broth.Photo by Tengyart on Unsplash
The essence of service russe is that it takes you through the meal stage by stage. You could say it unfolds like a story. Each course is a self-contained episode and needs to be fully achieved in its own right, but the menu needs to hang together as a whole, too. Getting the menu right is one of the most challenging things a chef does. Here are some principles that I've developed over the years to help me plan a good menu:

Decide on your main course before you consider anything else. Every other course is at the service of this one. It's often easier to get the balance right if this is your richest, heartiest course. It's a good place to serve red meat or game dishes, but don't be afraid to serve your best fish dish or something delicate if you want. It's simply a question of getting the other courses lined up in such a way that the main one really sings. 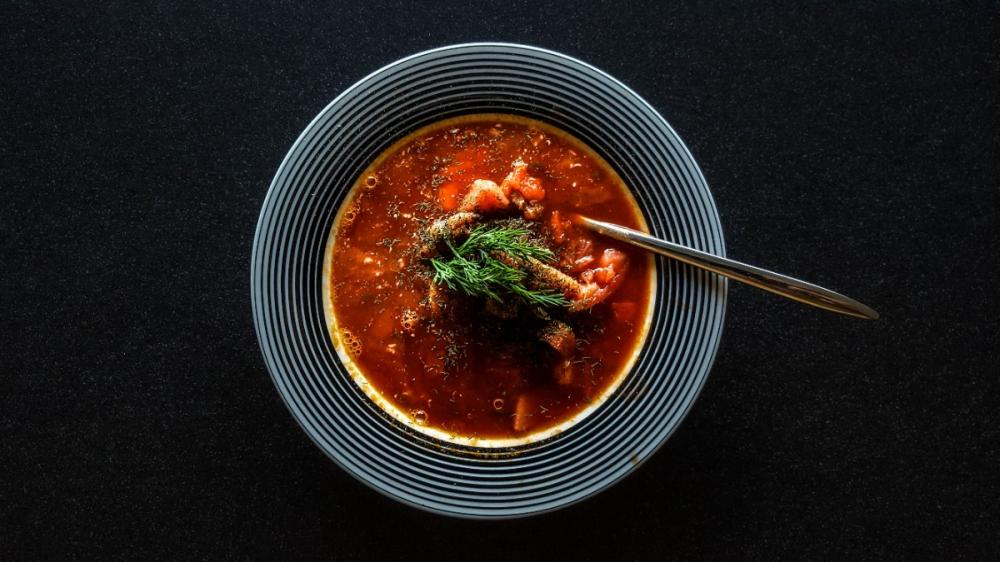 Russian soup. Photo by Artiom Vallat on Unsplash
After your main course, think about the starter. What do you want your guests' first experience to be? Keep the dish small but be bold - a starter can be quite intensely flavoured if you like. Think also about how busy you want to be at this stage in the meal. Soup is great, easily "dollied-up" on the last minute with fresh herbs, and colourful garnishes, to make it memorable. Try this one sometime: put a thin slice of lemon and some chopped fresh tarragon in the bottom of your bowls before adding steaming hot beef consommé.

Finally, decide on your dessert. Citrus flavours can be useful for perking up appetites that have become a little jaded by a large meal. Sorbets are easy, light, refreshing and can be made a day or two in advance. It's great if your dessert is a talking-point, but this isn't the place for wild experimentation. Chocolate-coated cherry tomatoes will surprise your guests in a good way: goat's cheese & chilli rice pudding won't.

You don’t need to stick to three courses. If you’re feeling adventurous or ambitious, there’s no reason not to serve four or even five. There are some broader considerations that can help you tell an amazing story however many courses you serve.

Choosing dishes from the same culture or region is a good way to help you achieve unity in the menu. I'm not saying you can never serve a curried dish after an Italian one, or coq au vin with couscous. If you do so, though, you're likely to have to work a lot harder for your guests to feel they've eaten just one dinner, rather than the dismembered bits of several. 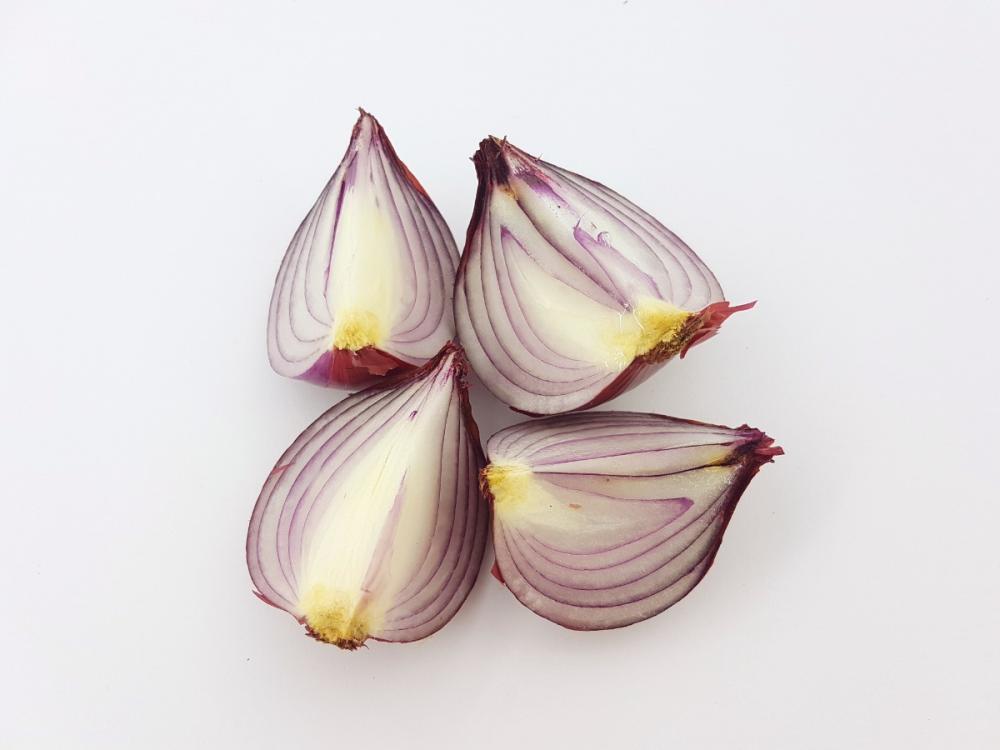 Avoid serving the same key flavour twice. If you're having an orange cheesecake for dessert, don't put orange in your salad. If your main course is mushroom stroganoff, avoid milky or creamy puddings. Don't serve beef carpaccio if you're having steak later. Some flavours linger on the palate, too, so make sure you serve them later in the meal. Raw shallot, finely chopped and used sparingly, really lifts a salad, but you don’t want it still on your palate when you bring out the panna cotta. Try serving a light sorbet or a small glass of flavoured vodka before dessert, to clean any stray flavours from your palate.

Play with contrasts: serve a hot course after a cold one, something fresh and juicy after something rich or creamy, something crisp or crunchy to follow something soft. If you put hot food on the same plate as cold, though, do it for conscious effect. Ice cream melting onto hot cherry pie is delicious; salad next to hot pasta just wilts unpleasantly.

Keep your portions on the small side. You've worked hard to make the food: you don't want guests declining your spectacular dessert because you've over-filled them. I usually calculate about 150g/6oz of meat or fish for a main course dish, half that for a starter. Also, leave time between courses. It aids digestion and supports conversation. 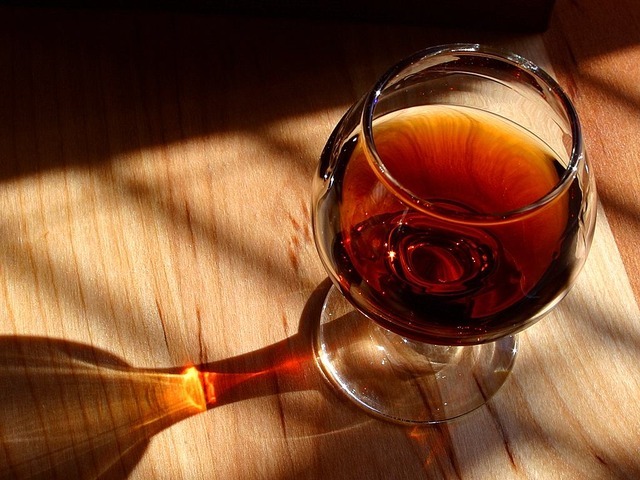 Image by PDPhotos from Pixabay
There’s a French tradition called la pause bourgignonne or le trou normand: after the main course and its wine are finished, the dishes are cleared and guests are served a thimbleful of marc (a kind of brandy) or Calvados (sometimes with a splash of hot water). It’s a slightly extended break between courses, which the spirits just fills so nobody feels that the evening is going slowly. With smaller portions and a relaxed approach to service, you could serve a 4 or even 5 course dinner if that's your thing. (It is mine.)

Starch is filling. Be very parsimonious with bread, potatoes, rice and pasta. An Italian meal serves these ingredients as a course in their own right, and rarely as an accompaniment to the main course. Be confident enough in a big meal to simply leave the potatoes out altogether.

I finished my last article with a comment on wine and suggested service russe lends itself best to wine mating. Authors have written whole books about the subject, but I’ll offer a few pointers in my next article in this series.


Writing as The Aperitif Guy, Paul Fogarty maintains a popular food & drinks blog, which can be found at blog.theaperitifguy.co.uk