Martin Gott and Nicola Robinson, the artisan cheesemakers behind award winning St. James cheese, have launched a brand-new cheese, a semi-hard in the round combined milk cheese.

The cheese is called GoaShee, appropriately named as it’s made using a blend of 30% sheep’s milk and 70% goat’s milk from Holker Farm’s own animals.

Martin and Nicola are making truly unique cheeses, GoaShee captures the terroir of their farm and its environs perfectly. Combined-milk cheeses are nothing new, they’re very common in Europe. Many of which evolved over time for purely practical reasons, as mixing milks allows a cheese maker to moderate supply fluctuations, which is often dependent on the breeding cycle of the animals on the farm.

Cheesemakers often combine milks from different animals to create flavours and textures that a single milk can't achieve. For example Melange Brebis from France, Mobay from the USA, Axridda from Sardinia, Pecorino Misto and Caciotta from Italy, Graviera Agrafon and Halloumi from Greece, La Gomera from Spain.

GoaShee itself is reminiscent of several Italian and Spanish hard cheeses. It’s matured for around six months and showcases the rich sweetness of sheep’s milk together with the delicate floral and herbaceous notes from the goat’s milk. 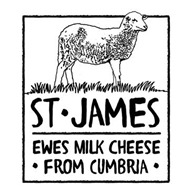 It is currently available from Courtyard Dairy, Settle and from a variety of specialist cheese mongers across the UK including The Fine Cheese Co in New Market Dairy, Manchester.

Martin Gott commented: ‘’This is the fourth seasonal cheese we’ve created so far this year. By miking both goat’s and sheep’s milks we’ve been able to create a really interesting cheese, which combines the best elements from both milk types. When the cheese is young at two to three months old it delivers a fresh and supple texture with herbaceous and floral notes, which as the cheese matures become more pronounced delivering an intense flavour profile and texture.’’