Straight after the horrendously wet weather at Spa-Francorchamps which ruined the Sunday of the Belgian Grand Prix weekend the F1 circus immediately relocated to Zandvoort in the Netherlands, just 185 miles away, in preparation for today’s Dutch Grand Prix. Formula 1 was making its first return to the coastal venue since 1985 and this afternoon it was the home hero Max Verstappen who claimed the victory spoils for himself and Red Bull in front of an absolute sea of ecstatic orange clad fans. 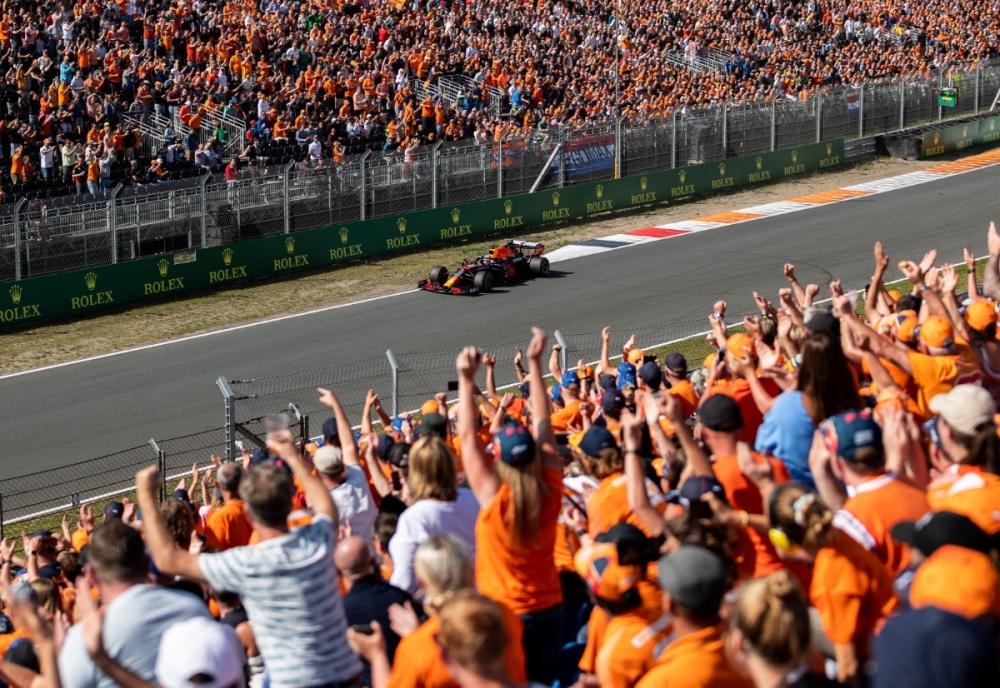 Max Verstappen’s victory absolutely thrilled his army of delighted fans
On the driver front, there has long been much debate about whether Valtteri Bottas would remain as Sir Lewis Hamilton’s team-mate next year or be replaced by the 24 year old rising British star George Russell, a Mercedes junior driver placed at Williams for the last three seasons. An official announcement is still awaited, but we all know that, even if both drivers continue to remain deliberately coy about where their futures lie, it is Russell who will be confirmed shortly. Red Bull’s recent extension of Sergio Pérez’s contract for another year simply made it clear to all that Russell, out of contract and a free agent at the end of this season, was not available as the Austrian owned team would have snapped him up to partner Verstappen. When pressed during last Thursday’s press conference at Zandvoort Russell did however admit that he had been told just before the recent Belgian Grand Prix weekend which team he would be racing for next season.

As for Bottas’ future, a couple of days before the Dutch event Kimi Räikkönen confirmed what had already been widely rumoured, namely that he will be leaving Alfa Romeo and retiring from motorsport at the end of the season. This would create an ideal opportunity for the team to replace the departing Finn with a slightly younger one in the form of Bottas if they decide not to opt for the 18 year old French flyer Théo Pourchaire who tested for the team impressively this summer. Alternatively, the latter could line up with Bottas for next season, with Antonio Giovinazzi dropped. The now 41 year old Räikkönen, who has gained an army of fans worldwide due to both his driving ability and his legendary laidback dry sense of humour, made his F1 debut back at the Australian Grand Prix in 2001 and won his sole Drivers’ title for Ferrari in 2007. He spent 2010/11 away from Formula 1 driving in the World Rally Championship, but has been competing back at the pinnacle of world motorsport since 2012. Sadly Räikkönen’s weekend took a turn for the worse yesterday morning when the FIA announced that he had tested positive for Covid-19 and, despite feeling well, would have to remain in isolation at his hotel. This meant that the Polish Alfa Romeo reserve driver Robert Kubica would suddenly have to step in.

Elsewhere in the Zandvoort paddock the Red Bull team principal Christian Horner explained on Friday how he was trying to arrange for their current reserve and test driver Alex Albon to seal a deal to race for Williams next year, but he had concerns that Mercedes might try to block any move to the Grove based team. On a lighter note, It was also interesting to see Aston Martin’s four time world champion Sebastian Vettel very much continue his mentoring role with Haas’ Mick Schumacher, being happy to give something back to the Schumacher family after Mick’s father Michael had undertaken a similar role for a young Vettel during the early stages of his own F1 career. 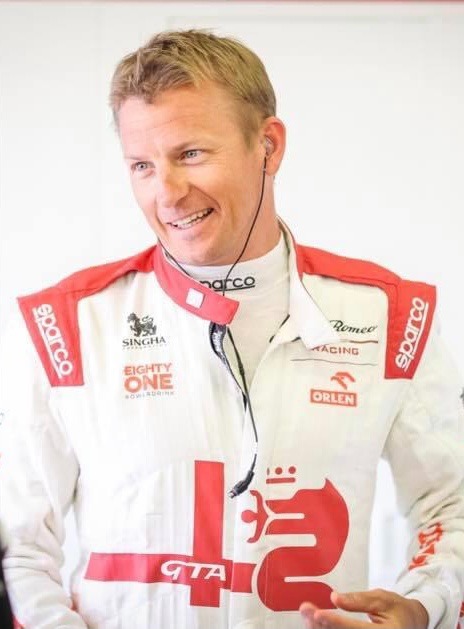 Kimi Räikkönen announced his retirement at the end of this season and then tested positive for Covid-19.
Turning to the Zandvoort circuit, there has been criticism that the facilities are somewhat cramped for modern F1 (and they are!) and also that the track, despite having been reprofiled in places, is too narrow for Formula 1 cars to have many opportunities for overtaking. The place had certainly received a spruce-up to welcome F1 back and the sweeping final corner now features 18 degree banking, allowing higher speeds and more full throttle running prior to the start/finish straight. The original idea had been that DRS deployment whilst still on the banking would assist potential overtaking opportunities on the following straight, but for this year at least the FIA governing body subsequently deemed that DRS could not be used on the banking but only once on the straight. Turn 3, named Hugenholtz, is also noticeably banked and the drivers were looking forward to experimenting with the best lines through it, if bracing themselves for the multiple high G corners and the toll they would take on their necks.

The Safety Car has been called into action during nine of the last 12 Grands Prix and, with much of the Zandvoort track being relatively narrow and surrounded by gravel run-off areas and with drivers getting to grips with its challenges for the first time in an F1 car, the team strategists were well aware that Safety Car interventions could well play a part in the Netherlands too.

In Friday morning’s opening free practice session Hamilton had topped the timesheets ahead of Verstappen and the Ferraris of Carlos Sainz and Charles Leclerc, but more than half of its one hour duration was lost to a lengthy red flag period after Vettel’s Aston Martin had ground to a halt near the pit lane exit with suspected electrical woes. Come the afternoon practice period the pair of Ferraris went fastest, with Leclerc now ahead, after it had been Hamilton’s turn to have to stop on track with a power loss, causing further red flags. Alpine’s Esteban Ocon and Bottas completed the top four, with Verstappen fifth after preferring to focus predominantly on race pace runs, whilst Nikita Mazepin also caused a further stoppage after beaching his Haas in the Turn 11 gravel. Verstappen was subsequently summoned to see the stewards after having overtaken the slow moving Aston Martin of Lance Stroll just as the session was redflagged for Hamilton’s stoppage, but his telemetry proved he had responded immediately and was not guilty of any wrongdoing. 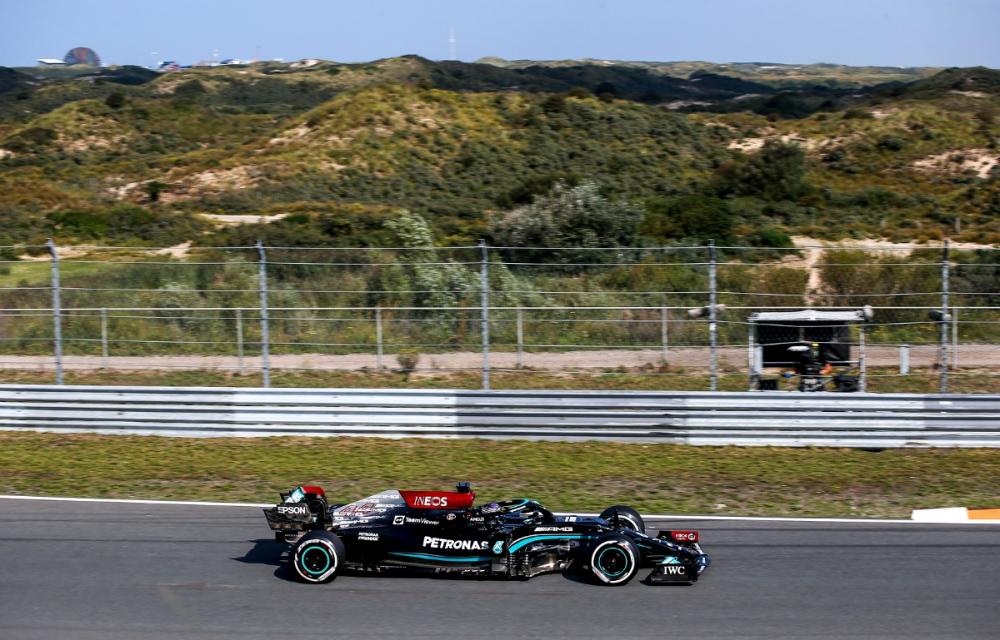 Lewis Hamilton’s Mercedes flies past the Dutch sand dunes
Come yesterday’s final practice session Verstappen was over half a second faster than his nearest rival, Bottas, with Hamilton third quickest. The running was again interrupted by red flags though after Sainz had lost the rear of his Ferrari at Turn 2 and hit the barriers at the top of the Turn 3 banking. At least the Ferrari engineers subsequently worked wonders to get Sainz’s damaged car repaired before qualifying began. In the second part of the qualifying process red flags again flew on two occasions as Russell and his Williams team-mate Nicholas Latifi both flew off the track and come the top ten shootout it was Verstappen who thrilled the 70,000 crowd by taking pole position for his home Grand Prix ahead of Hamilton. The gap between the pair was just 0.038s, but it would have been greater if the Red Bull driver’s DRS system hadn’t failed on his pole lap. To their rear Bottas and AlphaTauri’s Pierre Gasly completed the leading quartet for this afternoon’s race. Pérez had a disastrous qualifying, failing to reach the start/finish line in time to begin his final Q1 attempt, and was eliminated in 16th position. As a result his team decided to change his power unit for a new one, his fourth of the season, with the Mexican set to start with Latifi from the pit lane.

There was a real party atmosphere around the circuit as the start approached, with the home fans dancing to loud music in the grandstands and letting off plenty of orange smoke flares. As the 20 cars lined up on the grid polesitter Verstappen was very conscious that the nearby Hamilton and Bottas were determined to hunt him down, although, even if the distant Pérez was unable to help, some assistance might be possible from Gasly with AlphaTauri being Red Bull’s sister team. In total contrast to last weekend, there was sunshine and blue skies when those famous red lights went out and we had a clean start as the top six maintained station out front, led by the home hero.

As the race settled Verstappen started to edge further clear of the pursuing Hamilton, with Bottas clearly the best of the rest but not challenging the front pair. In terms of pit stop strategy Mercedes jumped first by bringing Hamilton in on lap 21 to switch from soft to medium specification tyres, with Red Bull immediately mirroring the same move. This left the still to stop Bottas temporarily in the lead, but Verstappen usurped him at the end of the 30th tour and the Mercedes number two was himself soon headed down the pit lane. 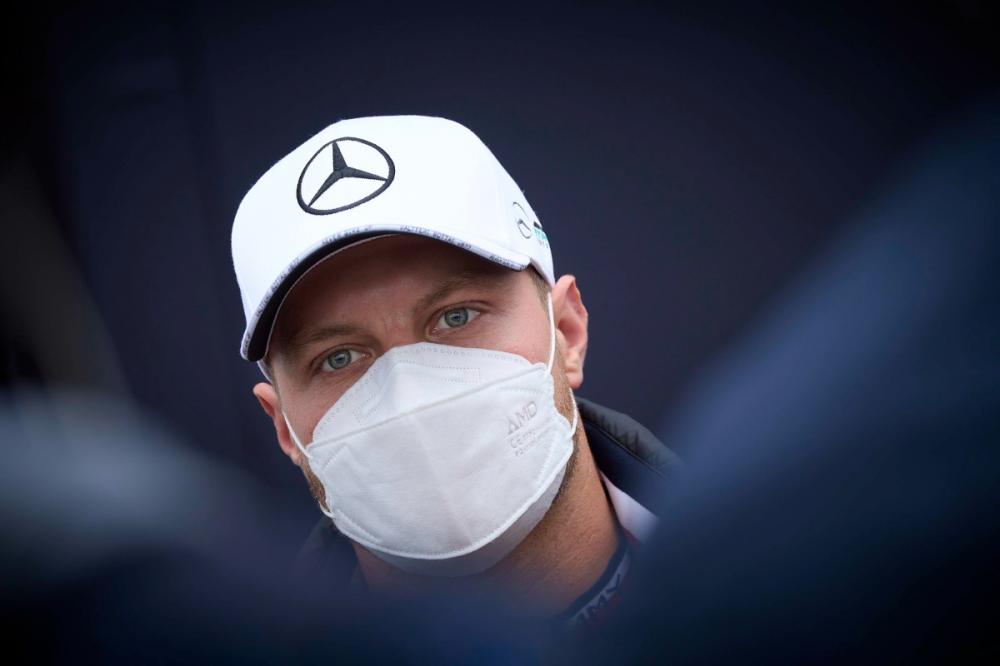 Where Valtteri Bottas’ future lies should be announced very shortly
At the mid race point Verstappen still led from Hamilton and Bottas, with Gasly and the two Ferraris completing the top six. On lap 40 Mercedes put Hamilton onto a further set of medium rubber and Red Bull again quickly responded, albeit with hard tyres for the race leader. With 17 tours remaining there was an interesting radio exchange as Mercedes told second placed Hamilton to back off and save his tyres for a late attempt for the fastest lap extra point, but the reigning champion was having none of it and told his team he was going to carry on trying to catch and pass the leading Verstappen.

In the end this didn’t happen as the Red Bull charger started to increase his lead and Mercedes brought Bottas in for a late precautionary stop. The Finn then proceeded to beat Hamilton’s fastest lap time despite twice being told by his team over the radio not to do so, which felt like a clear reaction by Bottas to being dropped at the end of this season. This meant Hamilton then pitted again on the penultimate lap for fresh rubber before reclaiming the extra point on the final lap of the Grand Prix. This all left the podium trio as Verstappen, Hamilton and Bottas, with Gasly an impressive fourth and Leclerc and Alpine’s Fernando Alonso completing the top six. 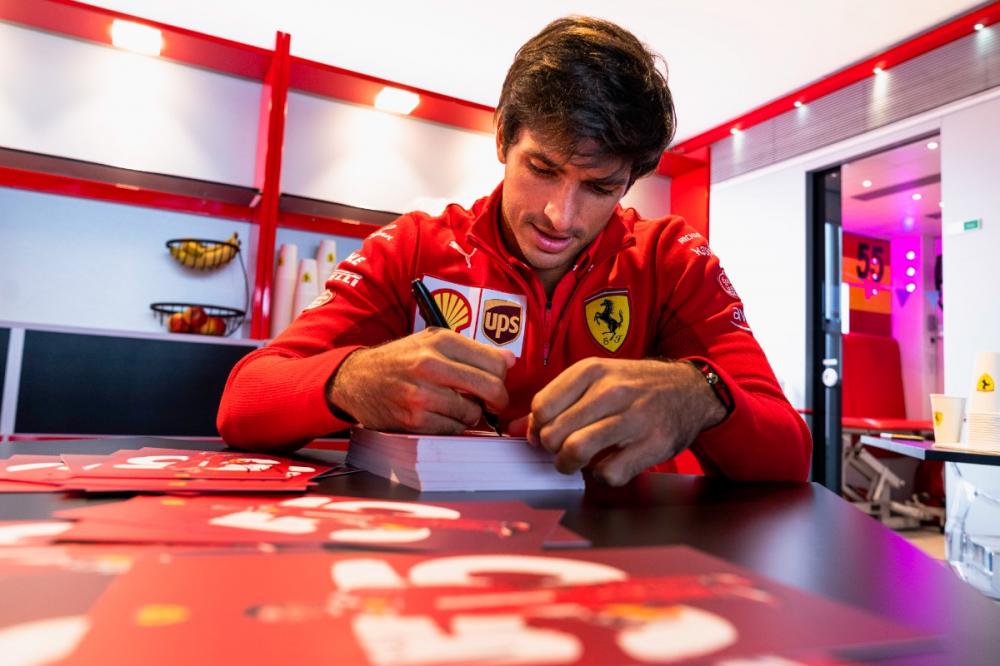 Ferrari’s Carlos Sainz proving there’s more to F1 than just driving the car!
Next up on this year’s calendar comes a circuit very different to Zandvoort - Italy’s iconic Monza track just outside Milan and long known as “The Temple of Speed”. With the cars due back in action for opening practice there in just five days’ time it was very much a case of packing up as quickly as possible this evening in Holland and hitting the road for Monza 680 miles away. Of course this only applied to the engineers, mechanics and truckers, with the race drivers and other personnel allowed a more leisurely transition than an overnight drive across Europe. With Verstappen now back in the lead of this year’s Drivers’ Championship, if only just, this great battle between the 23 year old Red Bull team leader and Hamilton will surely continue next weekend. Bring it on!