UK And India Ramp Up Joint Efforts On Climate Action 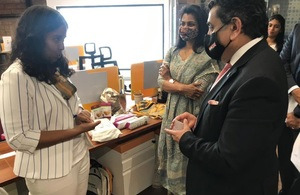 Lord Ahmad at WE Hub in Hyderabad, India’s first State-led incubator that promotes women entrepreneurship
The UK and India are working to expand research and collaboration links to tackle climate change, Lord (Tariq) Ahmad of Wimbledon, Minister of State for South Asia and the Commonwealth, announced at the end of his visit to India this week.

Science and technology partnerships between the UK and India are already playing a vital role to tackle the most pressing global challenges, including ending the Covid-19 pandemic through joint work to provide doses of the Oxford vaccine, manufactured in India, to developing countries. There is huge scope for expanding existing work to tackle climate change ahead of COP26.

Lord Ahmad concluded a five-day visit to India today (20 March) to reaffirm the UK’s commitment to a closer UK-India relationship as part of a wider focus on partnerships in the Indo-Pacific region, ahead of the UK Prime Minister’s visit to India and the UK’s G7 Summit in June which Prime Minister Modi has been invited to join.

During the visit, Lord Ahmad met with leaders from Tamil Nadu to discuss how the UK could share expertise with India on offshore wind energy at the headquarters of India’s National Institute of Wind Energy in Chennai. The UK has the largest offshore wind capacity in the world, and looks forward to India attending the Global Offshore Wind Summit 2021 in London in September.

Tamil Nadu has set an ambitious target for all taxis, two and three wheelers (auto-rickshaws) in the state’s six major cities to be electric by 2030. The Minister also attended a roundtable at the IIT (Indian Institute of Technology) Madras Research Park to build on links between the state and Dundee Council, which is a world-leading city in adoption of electric vehicles.

Both the UK and India are proud signatories to the Paris Agreement, and the UK is keen to work with India ahead of COP26 in November to lead the global shift to a low carbon economy and expand access to sustainable energy.

Lord Ahmad said:
"The UK and India have an invaluable partnership, including tackling Covid-19, with the Serum Institute of India manufacturing doses of the Oxford/AstraZeneca vaccine – drawing our brightest minds together to save lives as a global force for good.

"India has quadrupled wind and solar capacity in the last decade and committed to net zero emissions in the Indian Railways by 2030. I saw first-hand how we can work even more closely together on tackling climate action by sharing our solutions and expertise. Deepening UK-India collaboration will be crucial to building up to a successful outcome at COP26."

This followed a visit to Delhi where Lord Ahmad met with senior Indian government ministers and visited the Lotus Temple for a roundtable on freedom of religion and belief. He also visited Chandigarh where he met with agri-tech businesses, before heading to Chennai.

The visit built on the meeting between Foreign Secretary Dominic Raab and Prime Minister Modi in December, which set out further cooperation on medicines and vaccines to address global healthcare. The partnership between the Serum Institute of India and Oxford University demonstrates the UK-India relationship at its best, ensuring developing countries receive vaccines, and is an ongoing example of the two countries working together to save lives as a global force for good in the world.

During the visit, the UK published its Integrated Review, which sets out the new vision for its foreign, defence and development policy. It makes clear the Government’s ambition for the UK’s role in the world and the long-term strategic aims for national security, development and foreign policy, including through enhancing partnerships with nations including India. This will strengthen our security, build resilience to global challenges like climate change and Covid-19 and boost our strategic advantages through science and technology.