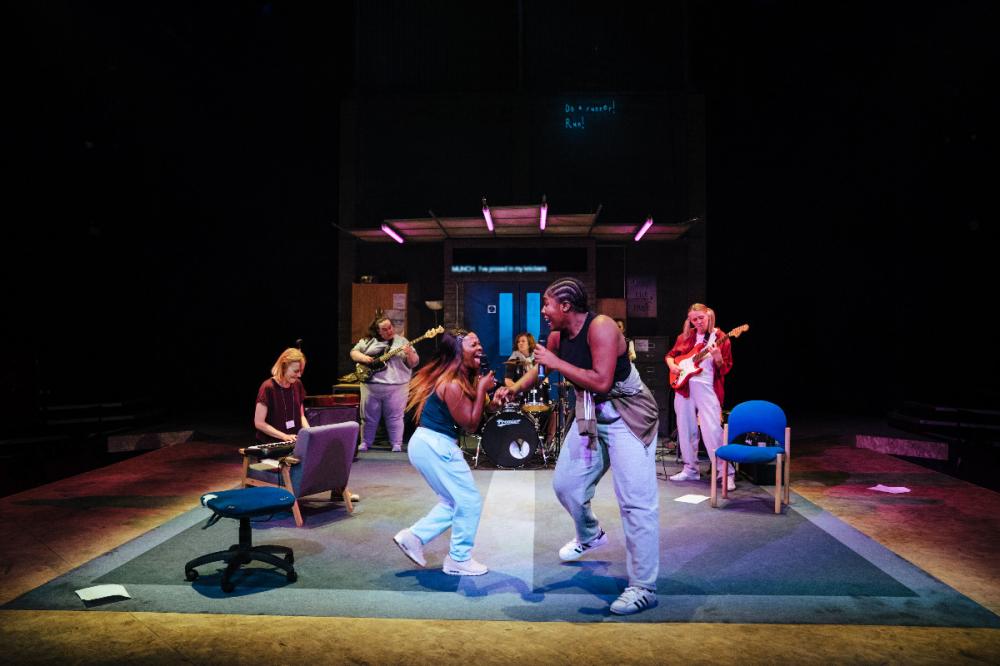 photo credit Helen Murray
In a specialised unit inside a prison, a group of five women join a music rehabilitation group and discover the music of a punk rock band ‘The Slits’. Maria, their visiting tutor, says that punk rock is easy to learn and as none can play any musical instrument, it seems an obvious choice.

Each inmate has her own story to tell and although on the surface they all appear tough and worldly wise, individually all have their vulnerabilities. It is through their music sessions that they each find a way to express themselves sharing their backgrounds, along with their hopes and fears for their families and futures, both whilst in prison and at the point of their release.

The choice of punk rock music is both symbolic and relevant as it was dismissed by society in general in the 1970’s much the same as female prisoners were then and still are today.

The play explores themes surrounding the rehabilitation of female prisoners, its usefulness or otherwise along with the more general themes re the inevitable tensions that exist within prison walls and perhaps more significantly, how each inmate has to develop their own coping strategies in order to survive. The rigid structure of life within the prison walls is also made clear by the almost panic of ‘Mouth’ as she is told of her parole hearing and possible imminent release with potentially nowhere to go until she hears that her sister ‘may offer her a bed’.

All of the cast were excellent but particular mention must be made of Alison Fitzjohn who took the part of ‘Mouth’. She was brilliant and as you might expect from her nickname, was very ‘Mouthy’ with enviable comic timing. Precious, played by Eddy Queens, was particularly convincing as she described her feelings of loss, only being allowed to see her two children once per month for a couple of hours. She barely knows her own children as they continue to grow and develop whilst she is incarcerated in prison.

Typical Girls, part play and part gig, was written by Morgan Lloyd Malcolm and is funny, fierce and furious. The production is co-produced with Clean Break, a women’s charitable theatre company, which was established by two female prisoners in 1979. The aim of the group is to use theatre to transform the lives of women who have been caught up within the criminal justice system. Ex-prisoners gaining employment, volunteering or indeed staying out of prison are the all aims of the Clean Break charity alongside continually challenging more general preconceptions with the use of theatre and drama.

Whilst ‘Typical Girls’ is a fictional play, it is rooted in fact and although perhaps it is not your usual evening’s entertainment, if you fancy having your horizons broadened and your grey matter stretched, this may be for you. Having had some experience of the criminal justice system, I can vouch that it’s both authentic and thought provoking and well worth a couple of hours of your time.

Crucible Theatre, Sheffield
Until 16th October
Also by Sarah Crown...
Swan Lake – Ballet At Its BestBedknobs And Broomsticks – A Magical EveningWaitress - Over Here Please!Tell Me On A Sunday - But Watch This Any Day!