Triumph Of The Swill

After seeing the success of the proposed European Super League for football, it was announced today by the Conservative Party that they would be founding a new British Super Politics League. “Young people are no longer interested in politics,” said a party spokesman. “There are too many poor quality election campaigns run by unattractive minor parties. That’s why we’re forming a breakaway super league of political parties that the people want to watch. No-one wants to see minor parties such as the Greens and the Lib Dems scrapping for votes on a wet Tuesday night in Stoke. The new British Super Politics League will feature only the biggest, most glamorous names: the Conservative Party and, er, that’s it. Labour? Never heard of them.”

As much as Boris Johnson enjoys holding an election – and he certainly pulled off a good one in Hartlepool – the Tories are free once again to concentrate on fulfilling the will of the people and focusing on the real business of government: shovelling big, fat contracts to anyone who donates money to the Conservative Party. Sorry, no, I mean making good on those snappy slogans they keep coming out with. There’s “Levelling Up” for starters – once they’ve worked out what they actually mean by it. Then there’s Johnson’s favourite pastime, “Build Bus Boxes” (or was it “Build Big Bridges”? I may have misremembered this one). And finally, they have a new one, “Live Local And Prosper” – though that may be tricky if you were a care home resident during the first Covid wave, obviously. 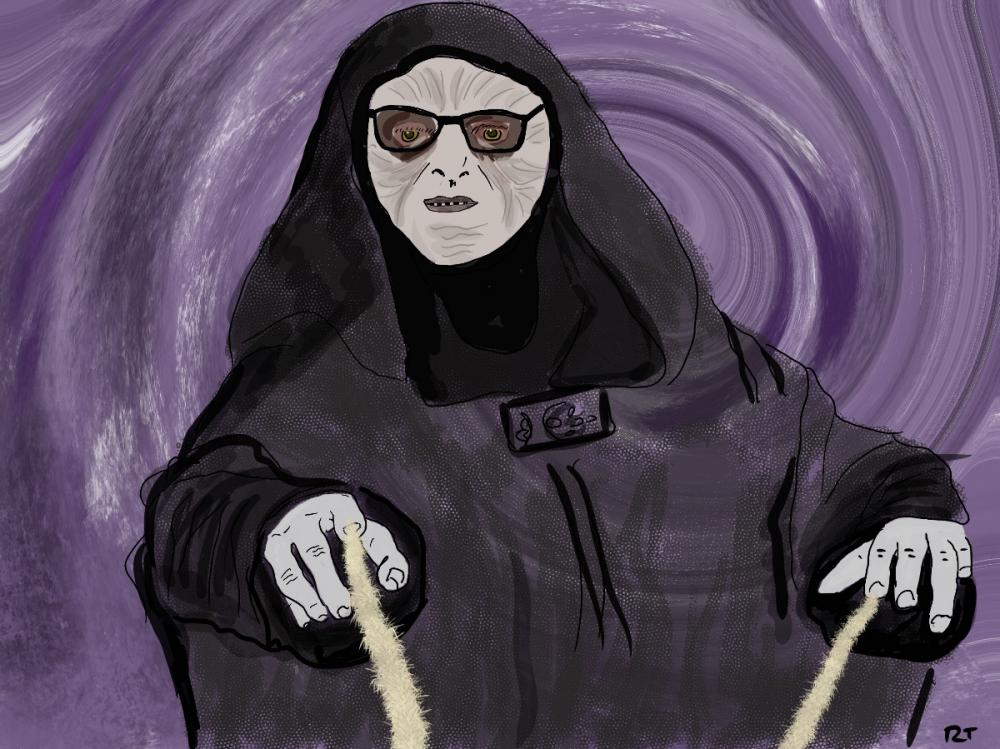 The sci-fi geekery of the Spock-echoing “Live Local And Prosper” must be one of Dominic Cummings’s legacies. I doubt they’d have ever gone with that other Spock-ism, “The Needs Of The Many Outweigh The Needs Of The Few”, not least because that’s been used by the Labour Party for the last couple of general elections. Labour’s catchphrase is that they are now “Under New Management” – more of which later. I always saw Cummings as more of a Star Wars fanboy than a Trekkie – “May the fourth term in office be with you”, “these aren’t the dodgy contracts you’re looking for”, that kind of thing. I expect Cummings would be on the side of the Empire though. Like the Tory Party, the Empire is exceptionally good at bunging large contracts to their mates which result in flawed products: indeed, the only known instance of a government contract costing more than the Death Star is Test and Trace. At least the Death Star worked for a while.

The Tories also seem quite keen on the proto-fascist stylings that the Empire dabbled in, judging by the new (and newly discarded) government briefing room, which appeared to have been designed by Leni Riefenstahl from a commission by Oswald Mosley. Poor Allegra Stratton, hired by No. 10 to be the voice of Boris Johnson at press briefings, never got chance to use the briefing room, sidelined as a victim of the Symonds-Cummings-Johnson love triangle. Stratton did at least get to make one memorable intervention in private press briefings, insisting that Johnson acts with “integrity and honesty”. All I can say is: it takes one to know one.

The government does have plenty to get on with, like still trying to think of something to do about social care. After all, it’s only been two years since Johnson said he had a clear plan prepared, which was about as truthful as everything else that comes out of his mouth. Then there’s all the investigations into why anyone bunging cash to the Tory Party somehow ends up with government contracts. No doubt it’s all a coincidence that Lord Brownlow, believed to have paid for Johnson’s extensive refurbishment of Downing Street, has received multiple large contracts. As the Roman poet didn’t exactly say: dulce est decor ex gratia emptori – it’s nice to get your decoration paid for as a freebie.

The Electoral Commission is investigating the funding, saying there were "reasonable grounds" to suspect an "offence or offences" may have occurred. No doubt the commission will be seeking the down-low from Brownlow. Still, as Johnson might have said, let the investigative bodies pile up!

With all the lockdown restrictions finally easing back into normality, Johnson has said that he’ll be thrilled to be playing tennis again. I’m not surprised, since he likes to charge donors £160,000 for the privilege. He does appear to be very good at the backhand.

Meanwhile, renowned libertarian Johnson has announced that ID cards will be mandatory for general elections in the future, having voted against them twelve times previously. Perhaps libertarianism doesn’t mean what it used to mean. It’s yet to be confirmed that bids for the contract to manufacture the ID cards will be open to anyone who has the PM’s phone number and is willing to pay for baby Wilf’s Montessori fees.

But apparently Johnson can do anything he likes with impunity now, judging by the Hartlepool by-election result, where the Labour Party was kicked in the Corbyns and had its Starmer handed to it on a plate. How’s that New Management schtick going? In the aftermath of the bonfire of inanities, Keir Starmer promised to take full responsibility. “To be clear, I take responsibility. Nobody else,” he said. “And that’s why I’m sacking Angela Rayner, Annaliese Dodds and Nick Brown,” he didn’t add. “That is, if Angela will let me. Angela? Angela! Wait!”

After Rayner’s refusal to go quietly, her new role as Michael Gove’s shadow promises to be an exciting one. Gove has never been seen with a shadow before, or a reflection in a mirror.

Starmer’s allies insisted Rayner was “not being sacked”, merely that “she is being used differently.” Yes, indeed. And the popularity of the Labour party isn’t waning; it’s just that, like Spinal Tap, their appeal is becoming more selective.


Also by Roger Winterbottom...
It's Coming HomeTragedy Or Farce: Hell Hath No Fury Like A Cummings ScornedRun With The FoxHonesty Is One Of A Range Of OptionsWill Johnson The Pleasure Bot Have a Premature Relaxation?
The people of Hartlepool were quick to explain why they had rejected the Labour candidate, with one voter commenting, “We’ve had enough of Labour. They’ve wrecked it totally. The hospital, we haven’t even got a cell where we can lock someone up on a night. We haven’t got a court. You’ve got to have these facilities.” He’s really going to be in shock when he finds out who’s in government.

Meanwhile, another voter was praising the Tories for providing nine food banks, when Labour had never given them any. He won’t have to worry about that now – I’m sure there’ll be plenty more food banks coming along shortly once we’re all levelled up.