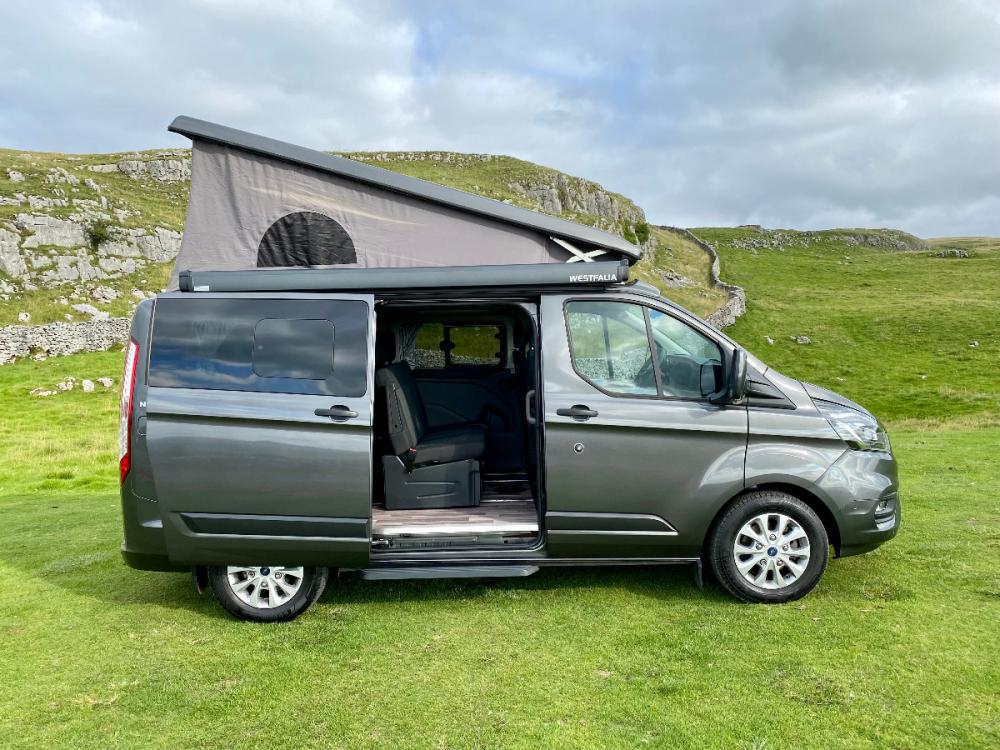 With foreign holidays put on hold due to the pandemic, sales of motorhomes and campervans have boomed over the last year or so. Second hand prices have risen sharply and good vehicles are in short supply.

I must confess to being unaware of Ford’s foray into the world of campervans but having spied their rather oddly named Nugget at a recent drive event, I asked if I could borrow one for a few nights away.

The Nugget is based on the rather excellent Ford Transit Custom, a medium sized van, and is built by conversion specialists Westfalia, a name familiar to many.

The Nugget goes head-to-head with Volkswagen’s popular California and the somewhat rarer Marco Polo from Mercedes Benz. Both are expensive, but that does not seem to be any hinderance to sales, not if the number I regularly spy on my travels through the Dales is anything to go by. 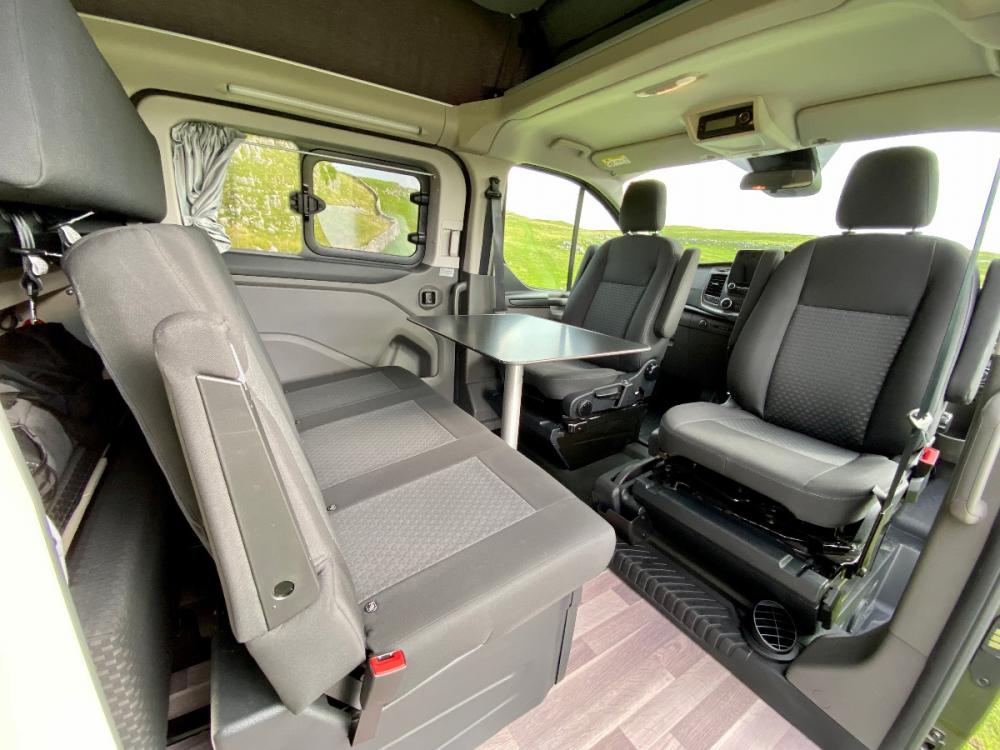 Prices for Ford’s camper start at a heady £63,576 and for that you get a base vehicle with a 130PS diesel engine and manual gears. My test vehicle had the more powerful 185PS motor under the bonnet and this was mated to a rather slick automatic gearbox.

I was quite surprised at how spritely the Nugget was on the road, with strong acceleration from rest right up to and beyond the national speed limit. You certainly won’t hold anyone up if you’re in the mood to press on.

The two captains chairs up front offer plenty of adjustment and the view out excellent. Both chairs swivel round when parked up to form part of the dining area. 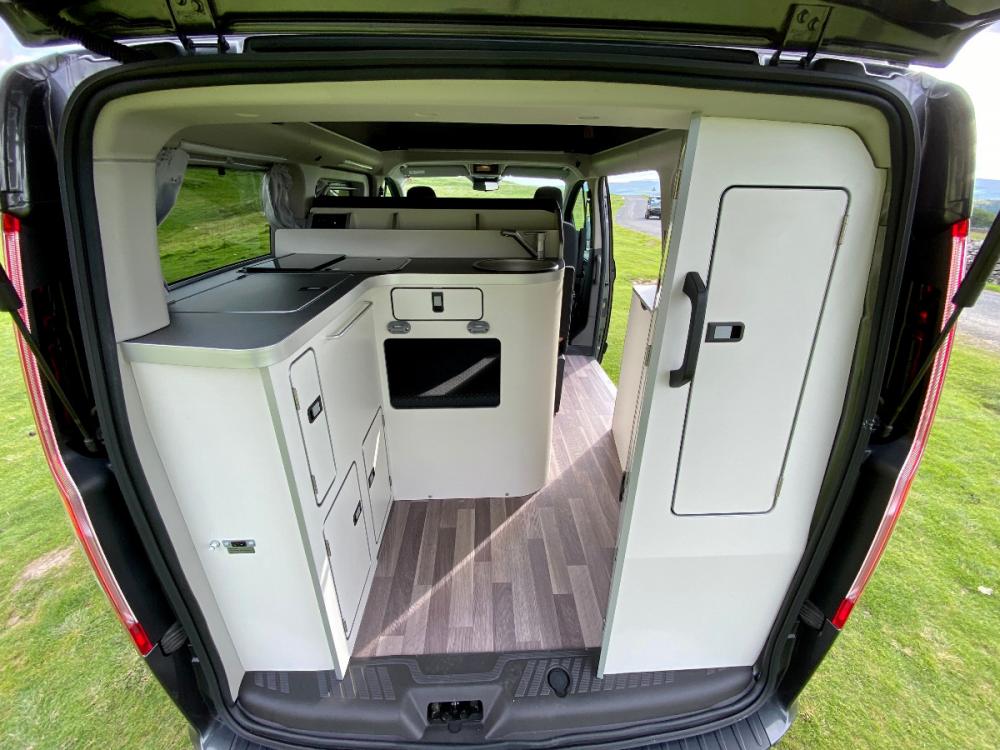 A reversing camera is fitted along with rather sensitive parking sensors, so manoeuvring in tight spaces is a doddle.

Directly behind the front passenger seat is a bench seat with seat belts for extra passengers. That being the case, I can see many customers being content to run a Nugget as their only vehicle. Its exterior dimensions are modest, so regular car parking spaces are not off limits, and the camper should comfortably fit on the average family driveway.

Equipment count on the base vehicle is quite comprehensive, though I was surprised to find the cab did not have air conditioning fitted. Apparently, it is a cost option and someone in Ford’s PR department clearly omitted to tick the box. 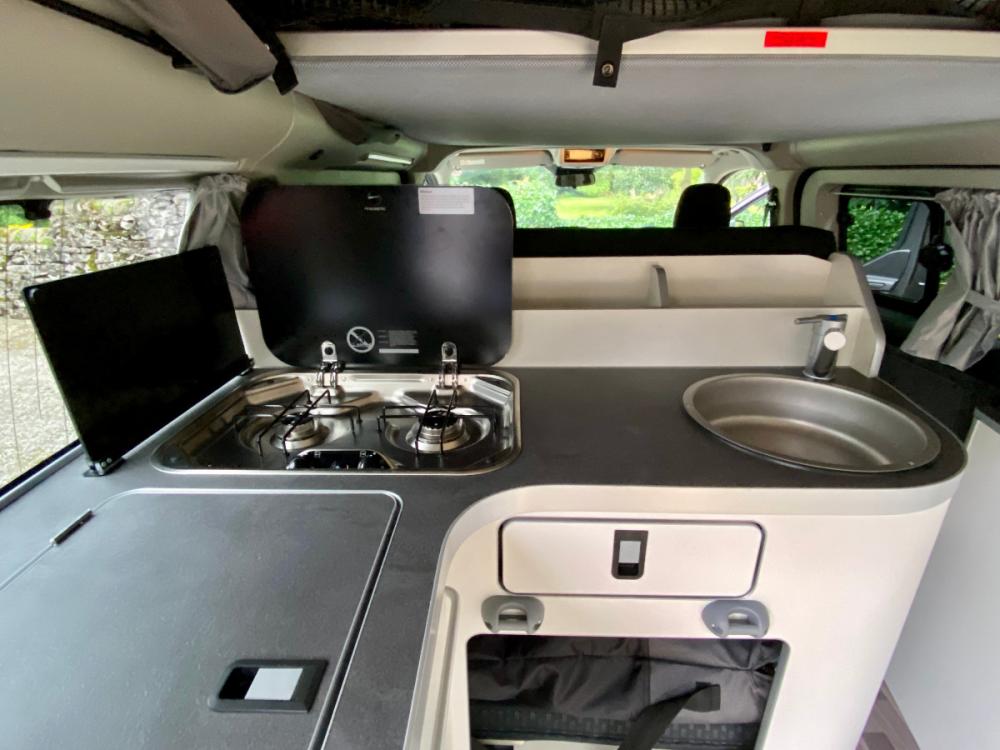 However, what you really want to know is what is the Nugget like as a home away from home.

Rather unusually, the kitchen is situated at the back. It comes complete with a two-burner gas hob, a refrigerator, and a sink. There is a modest amount of storage space, so I guess stocking up on food requisites fairly regularly will be the order of the day.

In order to be able to move around, the pop top roof needs to be raised, a simple enough task which requires releasing just one clip. It does require a good deal of strength to raise it and it does help being tall. Lowering it also requires some effort and I never quite mastered tucking all the material safely away. 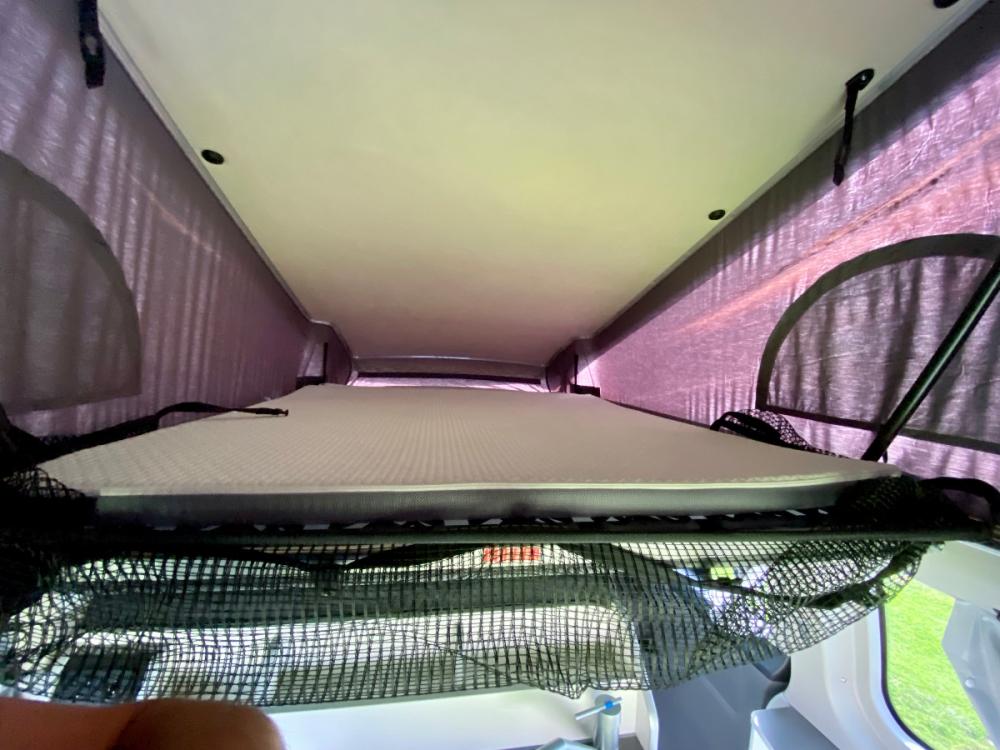 With the top raised, the upper bed can be lowered from the roof and there is a ladder supplied to help clamber up. Those less than agile may find this a bit of a challenge. The mattress itself is quite comfortable and once the bed is made up for a trip away, you simply raise the bed back up into the roof each morning and can jump straight back in come bedtime. Easy.

The bench seat also converts into a second double bed, so in theory the Nugget can sleep four adults. You would all have to get on rather well…. More likely, a family with two children will be best catered for. 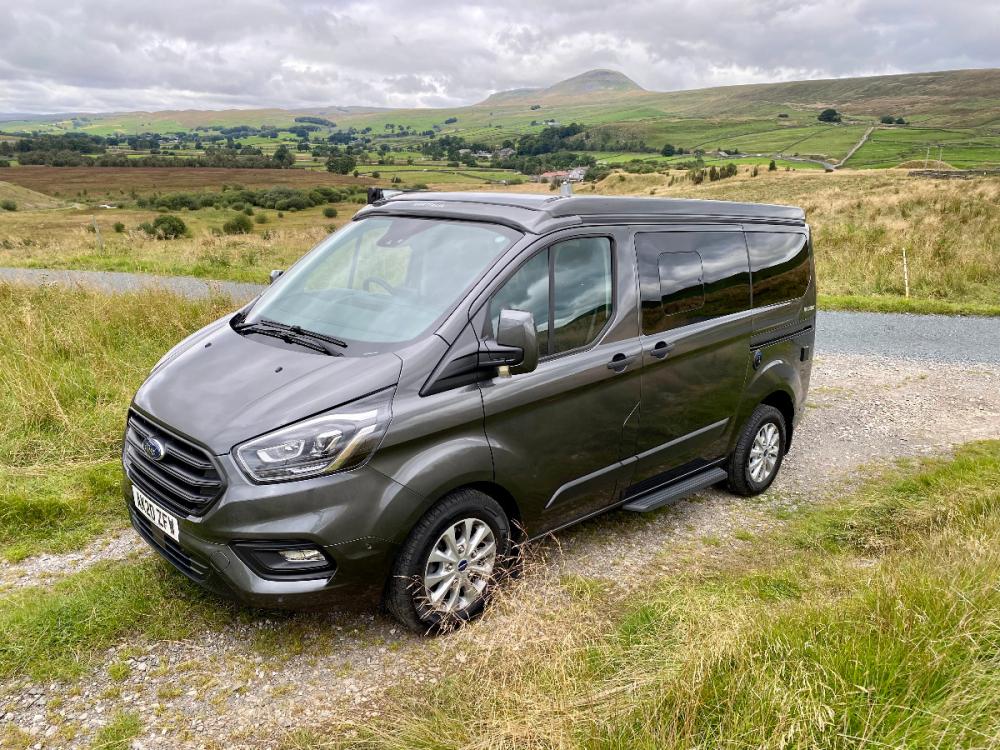 There is no bathroom or toilet facility in the Nugget I had on test, though there is an exterior connection for a shower. I suppose a quick hose down in the morning sunshine would be possible, though privacy might be an issue.

Ford do also make a slightly longer variant which does boast a modest toilet room. This adds about £4,000 to the list price and I think would be money well spent.

I must say that the fixtures and fittings are all high quality, and this does go some way to explaining the rather bullish pricing. A larger coachbuilt motorhome can be had for less money, but they do cater for a different market. 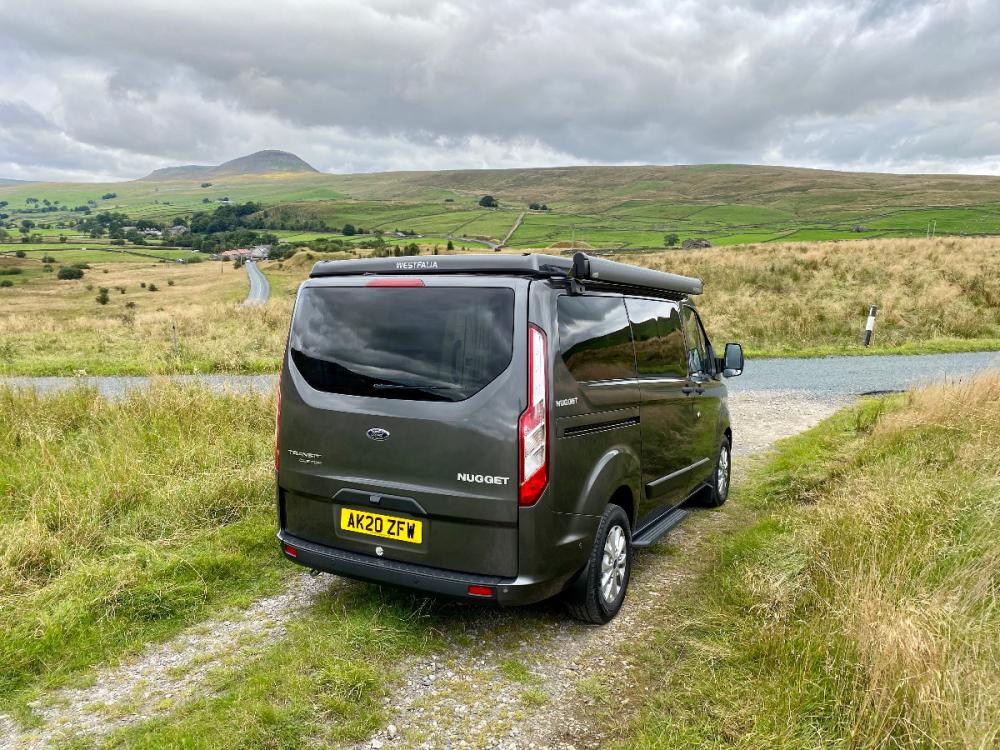 So, how did I get on with my minibreak? Sadly, the test vehicle had a faulty leisure battery and without it, none of the equipment worked. No lights, no running water etc.
I have been promised a replacement vehicle later in the year and am really looking forward to finally trying a night or two away. And even if it is in the winter, the blown air heating system should keep me warm and cosy.