'To Travel Hopefully' : Stations Of The Mind

Leeds Station's North Concourse in the 1950s
An image of the north concourse of Leeds Station, inadvertently seen online, reminded me of better days. The supple architectural elegance of this 1930s vision is the conduit through which so many journeys have begun, a wide corridor of hopes and dreams. And gorgeous it is, an art deco cathedral beneath whose shallow but robust curvature all our ‘compulsions meet’, as Philip Larkin noted of a disused church in East Yorkshire.

Not that there is any danger of this retail thoroughfare falling into disuse: it is still thronged daily by all manner and means of teeming humanity, mostly ambulant and directed, except for the noisy and be-seated drinkers and diners who gas and gab by the side of the main hall.

I first came here as a kid in the early sixties, just as the railway system was on the cusp of radical change, and steam trains still hissed, wheezed and trundled alongside the capacious platforms, before disgorging new arrivals into the city.

This would have been a return journey for me: we’d have come down on a morning train from Huddersfield, Leeds’ near neighbour at a mere thirteen or so miles down the line. And I never forget the excitement of arrival, the unique stationy smells, the bustle and the gratifyingly ubiquitous sense of purpose.

Everyone seemed to know where they were going, like the dog in the Billy Connolly joke. And even those who scratched their heads at onward destination boards were bound for some other location in an intricate network of lines and intersections, atoms in a frenetic nucleus.

Railway stations are not places for flâneurs. The contentedly aimless street ambler stopping randomly to gaze at new delights round undiscovered corners would be mown down in the relentless traffic of the London Underground; at your peril you stop to recalibrate direction in the human tide of the Tube.

But finding some distance – standing, as it were, on the riverbank, as the thunder of the tidal bore passes – is to feel the weight of anticipation amongst fellow travellers. From an early(ish) age I sort of understood Stevenson’s suggestion that to travel hopefully is better than to arrive. To stand in the human breeze as it wafts through ill-tempered barriers that sometimes open, and sometimes don’t; to hear the broken, utterly unrelated snatches of conversation as though in a stream of consciousness, is to be party to the illusion of collective endeavour. The sense of directedness thrills.

We are all here for a reason, as Larkin found of dilapidated churches. Except that in the relentless bustle of this place of secular devotion, the thrum of engaged living, the velocitous beavering from one platform to another is a general manifestation of will whose energy is overwhelmingly seductive; It bespeaks hope borne in activity, direction and purpose. The slight linear curve of its rails, which shine in certain lights, ring in the promise of the new and the unseen. 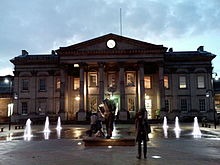 Huddersfield Railway Station
Only a flâneur would notice that passing faces wear mood more disparately here than in almost any other gathering place: the corpulent, apoplectic drone bound for an eight-hour slog at the office, the gap-toothed boy heading for the seaside with an ear-to-ear hinged grin, the bemused chap halfway to a root-filling, the elderly lady with a tartan trolley on a much-anticipated excursion to John Lewis, for which she arose at 5.30am in preparation. Lucian Freud would have a field day picking out the animated demeanours or the facial tics.

And me too, in a 1962 of the imagination. Standing beneath the substantial columns of Huddersfield Railway Station, that Romanesque paean to Victorian civic prosperity which John Betjeman would describe as the finest station façade in the country, I would be root-shaken by the prospect of the forthcoming journey, the Leeds-bound train emerging from the impossible blackness of the tunnel just at the end of the platform, the subway, the Menzies at the top of the staircase, and the slow, aching rumble of the carriages drawing to a standstill.

Nor could I ever forget the monotone tannoy, or the route relayed somberly, as though intoned from the Decalogue. I learned the stops by rote, along with the alphabet: ‘The 9.53 to Leeds, calling at Mirfield, Ravensthorpe, Dewsbury, Batley, Morley and Leeds’.

And as the tracks multiplied and widened as we pulled into the many-holed maw of the big city, we entered a new world.


Also by Steve Whitaker...
Poem Of The Week: ‘All The Pubs Where We Used To Meet Are Sinking’ By Carole Bromley'These Are The Hands' : Many Different Kinds Of Love By Michael Rosen'Wor Jackie and the People's DreamingPoem Of The Week: 'Going Blind' By Rainer Maria Rilke (1875-1926)Frank Worthington: Football Legend - 1948-2021