The Queen’s Green Canopy (QGC) will unveil two key initiatives during National Tree Week this month – a community led project to plant 10,000 trees in Bradford, and the launch of a QGC “Champion Cities” initiative. 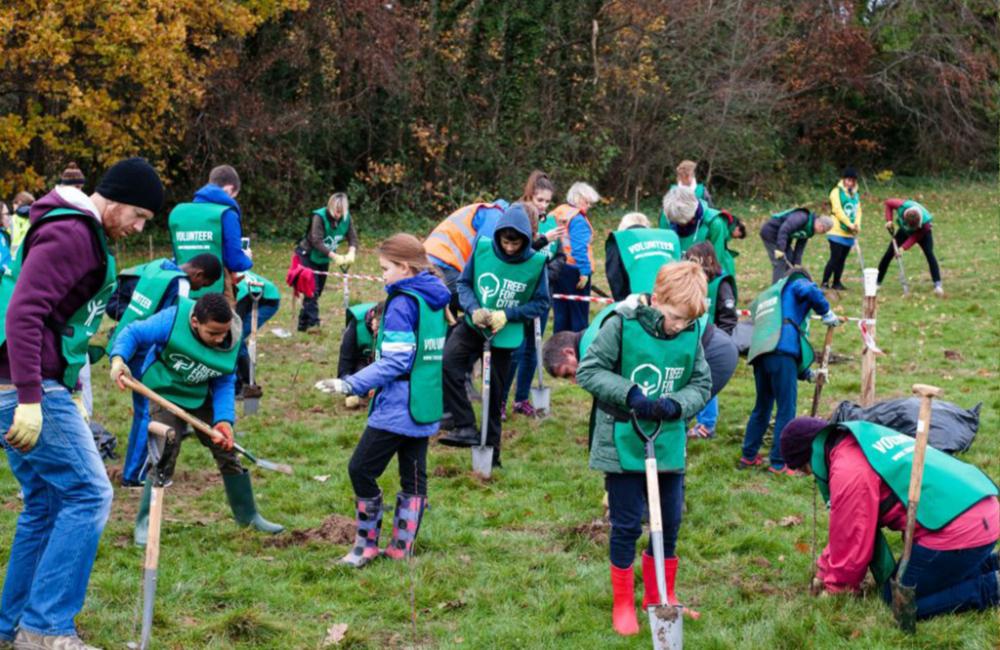 On Saturday, 27th November at Newhall Park in Bradford, the QGC came together with the local community, schools and voluntary groups of all ages to plant 10,000 trees as part of the Council’s “Tree for Every Child” programme.

Working in partnership with Trees for Cities and the City of Bradford Metropolitan Council, the QGC is continuing its programme to support urban greening in areas of high socioeconomic deprivation and low canopy cover.

This follows the successful delivery of the QGC’s first urban greening project in Tower Hamlets in October. The QGC and Trees for Cities will deliver projects in all four nations of the UK as part of the Platinum Jubilee year.

The QGC will also launch a “Champion Cities” initiative with Greater Manchester hosting community events on the 4th and 5th December, to highlight the leadership, dynamism, and influence of some of the nation’s outstanding cities which have trees and woodland as a central part of their plans for green spaces.

The QGC looks forward to hosting events to celebrate each Champion City in due course.

Background
As part of its work to highlight urban greening initiatives, the QGC invited cities from across the United Kingdom to apply for “Champion City” status. The initiative seeks to celebrate UK cities which have trees and woodlands as a central part of their plans for green spaces, for example in the form of a dynamic green recovery plan or green city charter, as well as com-munity-oriented environmental projects.

Through plans to plant three million trees, Greater Manchester has set an ambitious target of being carbon neutral by 2038. The city has developed strong green infrastructure coordination across the 10 Greater Manchester districts, which include some of the most socioec-onomically deprived regions in the country.

Everyone from individuals to Scout and Girlguiding groups, villages, cities, counties, schools and corporates will be encouraged to play their part to enhance our environment by planting trees during the official planting season between October to March. Tree planting will commence again in October 2022, through to the end of the Jubilee year.

With a focus on planting sustainably, the QGC will encourage tree planting to create a legacy in honour of The Queen’s leadership of the Nation, which will benefit future generations.

As well as inviting the planting of new trees, The Queen’s Green Canopy will dedicate a net-work of 70 Ancient Woodlands across the United Kingdom and identify 70 Ancient Trees to celebrate Her Majesty’s 70 years of service.

By inviting everyone to plant considerable numbers of new trees throughout the country, the QGC seeks to highlight the significant value of trees and woodlands as nature’s simple but highly effective way to clean the air we breathe, slow the impact of climate change, create important wildlife habitats and improve our general health and wellbeing.

Throughout Her reign, The Queen has planted more than 1,500 trees all over the
world and has spoken alongside Sir David Attenborough of the importance of trees in
the Earth’s future.
The QGC is a voluntary and inclusive initiative which is open to participation by
everyone in the UK.
The QGC is a symbolic gift which involves the voluntary dedication of forests and
woodland – there is no land/title transfer.
The QGC is a not-for-profit initiative, which has not received Government funding.

Further information about the QGC is available: www.queensgreencanopy.org